Blowing in the wind: $3.3 million to “enrich” research on health effects of wind farms

Updated 22/3/16 with responses from the NHMRC to Croakey’s questions (see below):

They were telling words in the announcement today by the National Health and Medical Research Council (NHMRC) that it had awarded two grants totalling $3.3 million to “enrich the evidence-based understanding of the effects of wind farms on human health.”

“These grants directly support the Australian Government’s commitment to determine any actual or potential effects of wind farms.”

They do, and fly in the face of failure by the Australian Government to take seriously climate change and its impacts on health and the cuts it has imposed broadly on science in this country in its current term.

The Statement had however left the door ajar, saying:

Given the poor quality of current direct evidence and the concern expressed by some members of the community, high quality research into possible health effects of wind farms, particularly within 1,500 metres (m), is warranted.

Today, Kelso said the NHMRC funded research at the Flinders University of South Australia would explore relationships between noise from wind farms and effects such as annoyances and reduced sleep and quality of life. It promises, “for the first time, (to) directly evaluate the sleep and physiological disturbance characteristics of wind farm noise compared to traffic noise…” Research at the University of New South Wales will investigate the broader social and environmental circumstances that may influence the health of people living near wind farms. UniNSW’s statement outlining the grant said:

Thousands of Australians living near wind farms will soon know if ‘wind turbine syndrome’ actually exists or if their symptoms are the result of the ‘nocebo effect’.

“There is no health or medical agency in the world that would give any rational priority to wind farms and health.

See Chapman’s earlier piece at The Conversation which notes that researchers’ success obtaining grants has never been lower in Australia – and in 2014, 92 per cent of health services research applications were not funded.

Croakey has asked the NHMRC to provide details on a number of questions. Here are the responses:

Q1: What research has NHMRC funded in relation to climate change and health over the past year, and over the past decade? How much funding went to these projects in total, and as a proportion of total NHMRC grants funding?

NHMRC: NHMRC has funded approximately $16.7 million in climate change research since 2000. A significant increase in funding was committed in 2009 through the then Department of Climate Change and Energy Efficiency (DCCEE), consistent with Government objectives and priorities at that time. A total of $6 million was committed collectively between NHMRC and DCCEE over a period of 3-5 years.

Q2: Given that the World Health Organisation has identified climate change as the most important public health issue of this century, what efforts is the NHMRC making to ensure health and medical research in Australia is addressing this? What is the NHMRC’s view on the importance of climate change as a health concern?

NHMRC: The Major health issues outlined in NHMRC’s Corporate Plan accommodate and enable climate change research and identify the need to ‘address and understand the relationships between environmental factors and health’.

Q3: What research has NHMRC funded in relation to fossil fuels and health over the past year, and over the past decade? How much funding went to these projects in total, and as a proportion of total NHMRC grants funding?

NHMRC: The above figure of $16.7 million includes research that included fossil/fuels as a keyword.  NHMRC’s publicly available dataset on climate change issues is located on our website.

Below are the full details of the grants, but first, some Twitter reactions: 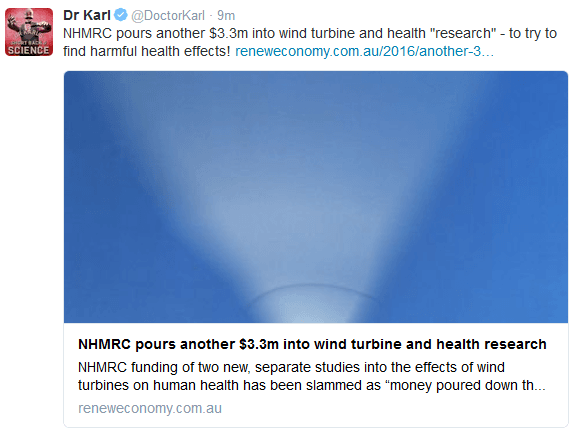 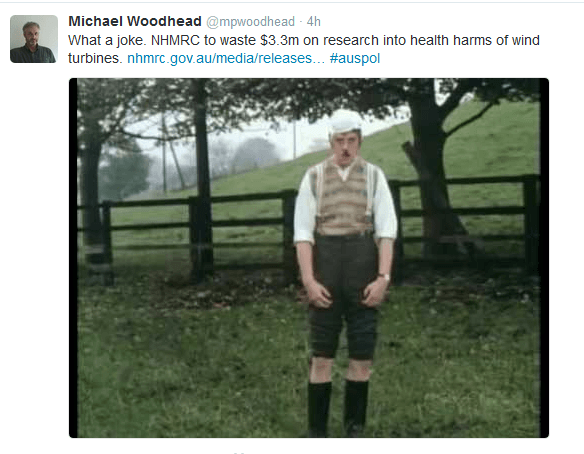 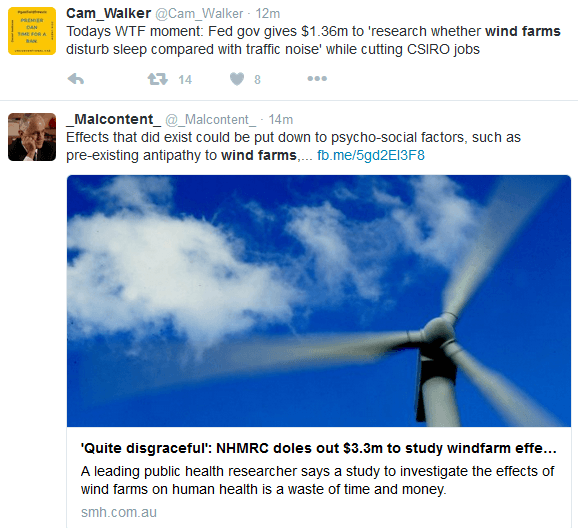 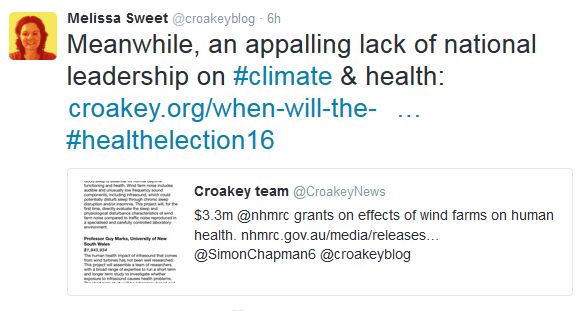 The recipients of the grants are:

Good sleep is essential for normal daytime functioning and health. Wind farm noise includes audible and unusually low frequency sound components, including infrasound, which could potentially disturb sleep through chronic sleep disruption and/or insomnia. This project will, for the first time, directly evaluate the sleep and physiological disturbance characteristics of wind farm noise compared to traffic noise reproduced in a specialised and carefully controlled laboratory environment.

The human health impact of infrasound that comes from wind turbines has not been well researched. This project will assemble a team of researchers with a broad range of expertise to run a short term and longer term study to investigate whether exposure to infrasound causes health problems. The short term study will be laboratory-based and run for three one week periods. The longer term study will be community based and run for six months. Sleep quality, balance, mood, and cardiovascular health will all be measured.

Croakey has invited Associate Professor Peter Catcheside and Professor Guy Marks to respond to this post.