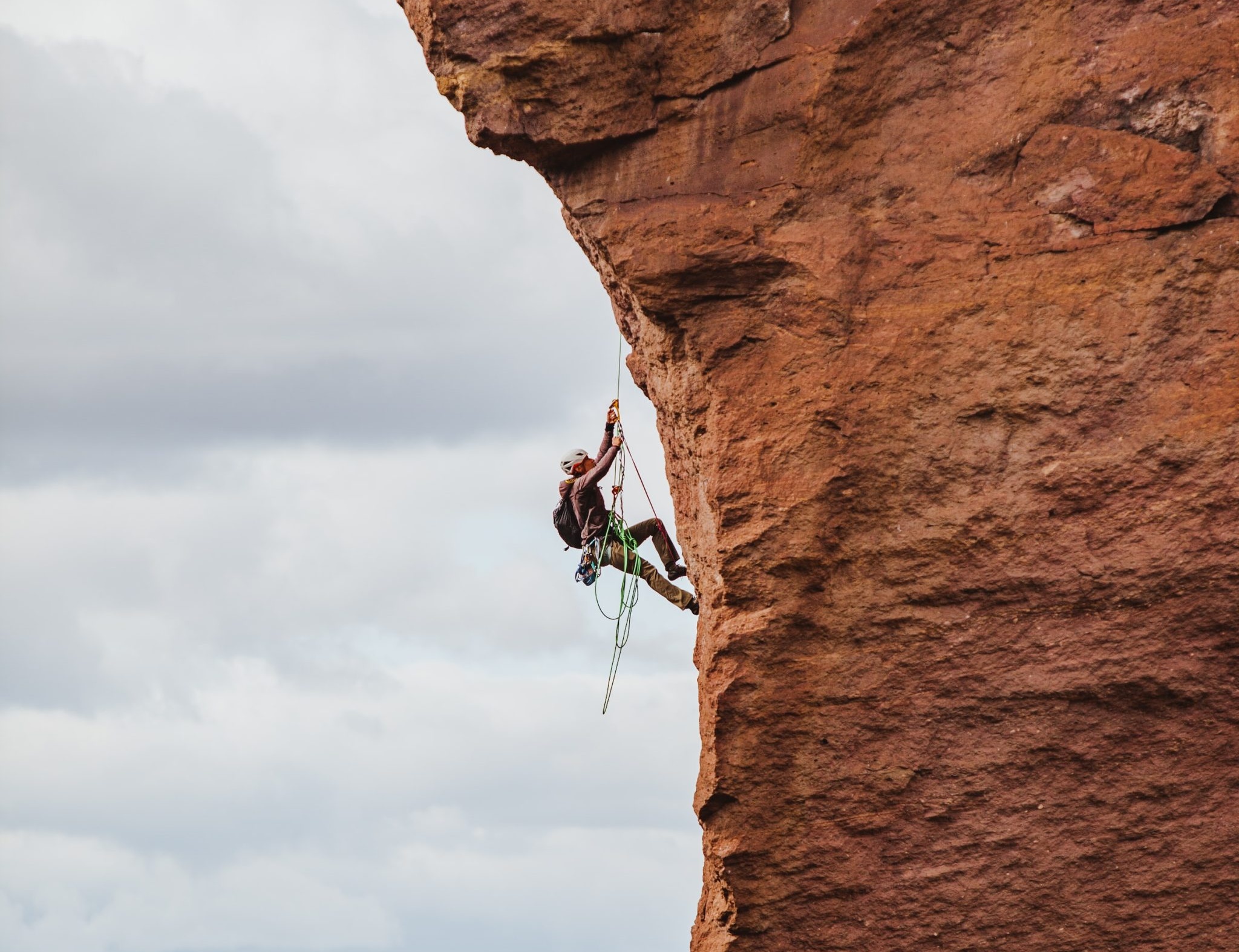 Courtesy of Sean Benesh on Unsplash

Introduction by Croakey: With the federal budget due out in just two weeks’ time, there are growing calls for a funding boost to address critical pressures in general practice.

Health Minister Mark Butler recently said fixing general practice was his first priority and all eyes will be watching to see what this means in terms of increased funding, particularly at a time of significant budgetary pressure.

As Croakey editor Cate Carrigan reports, an overall funding boost was one of the key calls to action from a GP crisis summit held in Canberra this week.

The Federal Government has been urged to embark on “big and bold” reform, including a significant boost to Medicare rebates and mixed funding models to tackle a general practice system that is at breaking point.

Implementing full indexation of the Medicare rebate, providing an immediate boost to bulk billing incentive payments and ensuring all young doctors had GP training were just three of the major proposals from yesterday’s GP crisis summit in Canberra.

The Royal Australian College of General Practitioners (RACGP)-convened summit came after the release of its annual GP check-up report, which found three in four GPs were feeling burnout and that nearly half felt their work was financially unsustainable, with Medicare rebates too low to support quality care.

Leaders from general practice, nurse groups, local health and workforce agencies, patient groups, universities and government took part in the summit with a white paper to be released next week.

Willett was hopeful there might be more funding in the upcoming federal budget, saying the $750 million already committed by the government to the Strengthening Medicare Taskforce was a good start but not enough to address “decades of chronic underfunding of Medicare”.

Willett said while two of the main proposals coming from the summit – the full indexation of the Medicare rebate and the setting up of an independent Medicare pricing authority – would take time, urgent action was needed to ensure everyone had access to a GP.

“We want an immediate increase in the bulk billing incentive payments to practices to ensure they can afford to bulk bill those on low incomes and pensions,” he said.

Dr Danielle McMullen, the vice president of the Australian Medical Association (AMA), warned that if there is no change the state of general practice – particularly in rural and remote areas but increasingly across the country – “is perilous”.

Aboriginal community controlled health services in the Northern Territory have been feeling the impact of the GP shortage, with number of new GPs and GP registrars declining sharply, from 61 in 2016 to just nine in 2022.

Moore said the “high burden of complex chronic disease and acute illness” in the NT made GP services critical and the shortage placed extra burden on the rest of the healthcare team.

“Recent research (has shown) that Central Australian Aboriginal people have the highest rate of diabetes in the world, but currently they have lower access to these services and this is getting worse,” she said.

Moore said while there had been progress in ‘closing the gap’ on life expectancy in the NT, there was still a long way to go and that the “severe workforce shortages” threaten to slow or even halt progress, leading to a widening of the gap.

“Aboriginal people in the NT and other remote areas have a higher need for GP services than mainstream populations with recent research showing that Central Australian Aboriginal people have the highest rate of diabetes in the world, but currently they have lower access to these services and this is getting worse,” she said.

Another participant at the summit, Rural Doctors Association of Australia (RDAA) CEO Peta Rutherford, said the challenges around recruitment and workforce shortages had been the reality for rural and remote area for many years.

“Many at the summit have said we’ve been the canary in the coal mine and now city-based practices are starting to see that pressure,” she said.

Rutherford said now it’s getting priority, health organisations and government might be able to address the real and long-term challenges that rural and remote communities are facing.

Rural GP and RDAA president Dr Megan Belot wants “big and bold” changes to come from the summit (which she was too busy to attend) including a rethink about the funding mix and an increase in the Medicare rebate.

Belot, who works out of Kerang, Echuca and Cohuna in northern Victoria, said there is a growing demand for GPs in rural areas, with some patients waiting up to six weeks for a regular appointment.

After waiting for weeks to see their GP, patients may come in with a list of multiple problems for their 15-minute appointment.

“To be honest, your heart sinks. You want to be able to give the most to your patients but trying to coordinate their care and getting them back in a timely manner can be a struggle,” she said.

While GP shortages were a factor before COVID, Belot said the pandemic had seen people rethink their careers and work/life balance and resulted in more bringing forward their retirement or leaving rural areas.

Speaking to me while working a shift as a GP anaesthetist in a hospital – work she does in addition to her practice – Belot said her husband laughed when she spoke of working ‘part-time’.

“It’s starting to take its toll. Early in the pandemic I had a child and was working part time and was quite positive about my work/life balance but now I feel great pressure to be working full time … and it’s getting challenging,” she said. 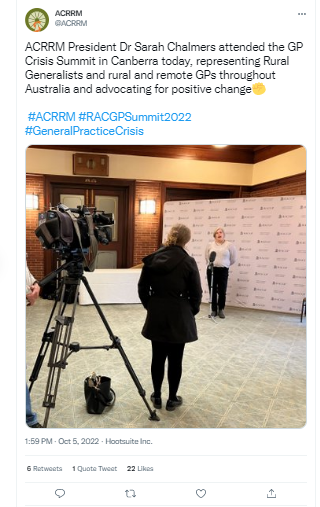 Both Belot and Moore raised concerns over Federal Government changes to restrictions on where overseas doctors can practice.

Under the changes, overseas doctors aren’t restricted to rural and remote locations but can practice in outer urban areas, a change that Belot says has already see GPs relocate away from rural areas.

Describing the decision as “very concerning”, Moore said it would cause an immediate shift of doctors away from remote areas.

“We are very disappointed that there was no consultation about this decision with the rural and remote health sector …. (we) cannot afford changes that actually make the crisis worse in the areas of the country with the highest health need,” said Moore.

AMSANT called for a range of changes including an international migration program – with a strong focus on Aboriginal health – specifically targeted at rural and remote areas, more training of health professionals in rural areas and more effort to boost the number of Aboriginal and Torres Strait Islander doctors.

Rethinking the funding mix was one crucial element in reform, according to many at the summit.

The AMA’s Danielle McMullen said while the Strengthening Medicare Taskforce is looking at how to spend the $750 million allocated over three years, that’s “just a down payment”.

There was a need for general practice funding reform that could include blended payment models and boosting funding for longer consultations and chronic care, she said.

“In addition to fee-for-service you can have block funding based on your patient population so that you can focus on particular areas of need such as diabetes,” said McMullen.

Under such a model, the practice could get money to invest in allied health – such as a dietitian – or patient recall systems to bolster patient education, rather than always relying on one-on-one consultations.

For the RDAA’s Dr Megan Belot there must be extra focus on rural and remote medicine in general practice funding reform.

Belot also backs block funding alongside fee-for-service, saying “running a private practice in rural and remote areas under a fee-for-service model is broken as it’s very hard to break even”.

The RACGP was amongst many at the summit calling for a change to doctor training to try and reverse a big move away from general practice.

While general practice attracted around 50 percent of medical graduates up until 15 years ago, now only 13 percent were interested in pursuing it as a career.

Willett said the best performing healthcare systems in the world – the UK, the Netherlands, NZ and Canada – all had a very strong general practice sector, as Australia had until recent years.

To address the problem, the summit has proposed a three-part plan: getting universities to increase general practice exposure for students; compulsory post-graduate placements in general practice; and sign-on bonuses for young doctors training as GPs.

“It’s hard to choose something you’ve never seen, said Willett, adding that junior doctors get exposed to many specialties during their hospital training but not general practice.

Willett said it was important that student and post graduate doctors get exposure even if they went into other fields, understanding general practice would make them better doctors.

McMullen wants the culture to change, saying the AMA wants strategies from “day one at medical school, through to retirement” to ensure general practice is valued as a career.

She said while most medical schools have some general practice training, this should be bolstered with better supervision, quality training placement and better alignment between the universities.

Victorian GP and RDAA vice president Megan Belot believes young doctors are being talked out of general practice by their universities, which rarely recommend it to their students.

“When I was training there’s was the attitude of ‘you don’t want to be just a GP?,” she said.

Another factor for Belot has been the stalled Medicare rebate which has seen GPs falling behind other medical fields in earnings and entitlements.

“If you were to become a paediatrician or a cardiologist or a renal physician in the hospital system you’ve got entitlements – parental and long service and education leave – which you don’t get as a GP,” she said.

On medical education and training, Belot said rural generalist medicine and rural general practice needed to be part of the mix for new doctors.

“In the hospital system the surgeon will say come and be a surgeon or the anaesthetist will encourage their specialty, but we need the rural GP or generalist to urge them into those fields,” she said.

AMSANT’s Dr Liz Moore wants increased remuneration to start in the GP registrar years and portability of entitlements – such as annual leave – between the hospital system and general practice training sites.

While there are significant issues ahead and a sense of urgency, there was optimism at the summit that bringing so many people to the table and recognising the problem was a positive step.

Describing herself as an optimist, the AMA’s Danielle McMullen said: “Even in these times of great challenge I think there is huge opportunity for general practice and primary care”.

McMullen said the reform work wouldn’t be easy – it takes work and government investment but “we’ve seen some willingness from them”.

“It will be tricky for the profession to come along for the ride …. but we really have the opportunity to build the GP system of the future,” she said.

Rutherford also saw the mood as positive, saying “to have a level of unity on the solution for not just rural and remote but urban general practice as well is reassuring”. 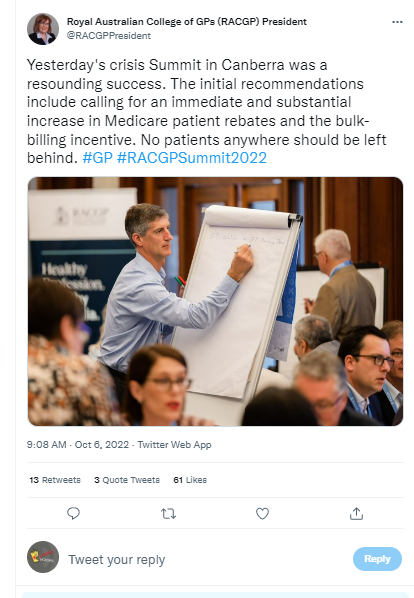 This article was updated on 11 October to include additional comments from Dr Liz Moore.