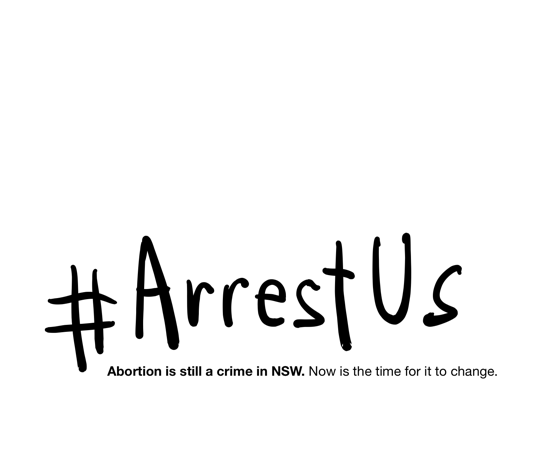 The NSW Government is set to debate a bill that will have it become the last state to decriminalise abortion. A new campaign has begun – #Arrest Us.

In the early 1970s eighty women declared themselves to be criminals in a national newspaper, taking out an advertisement as a provocation in the campaign to decriminalise abortion.

Fifty years on and abortion is still technically a crime in NSW. A bill to be debated in NSW Parliament this week seeks to finally change that. Should it pass women in NSW will finally have the freedom to make our reproductive health choices without facing the challenges presented because abortion is criminalised.

The decriminalisation of abortion in NSW has wide-reaching community support. The Bill set for debate is co-sponsored by fifteen politicians from across the spectrum. It has substantial cross-bench support but it is not without opposition.

Today, like in the 1970s, and while ever abortion is criminalised, some women face hurdles to access abortions and of course, for many it is difficult to speak out.

The women who took out the advert in the 1970s did it because they could. They had the privilege to be able to speak up and they believed they had a responsibility to do so.

And so it is time again, for those of us who can stand up and speak out to do so. One last time.

We, more than fifty women and fifty long years since that bold action of the 1970s, are making this statement:

We are diverse women. Our abortion experiences are varied. We have had abortions decades ago, and very recently.

We have all had abortions under NSW laws which define abortion as a crime. We want to be the last.

We say: Arrest us.

Abortion is still a crime in NSW. Now is the time for it to change.”