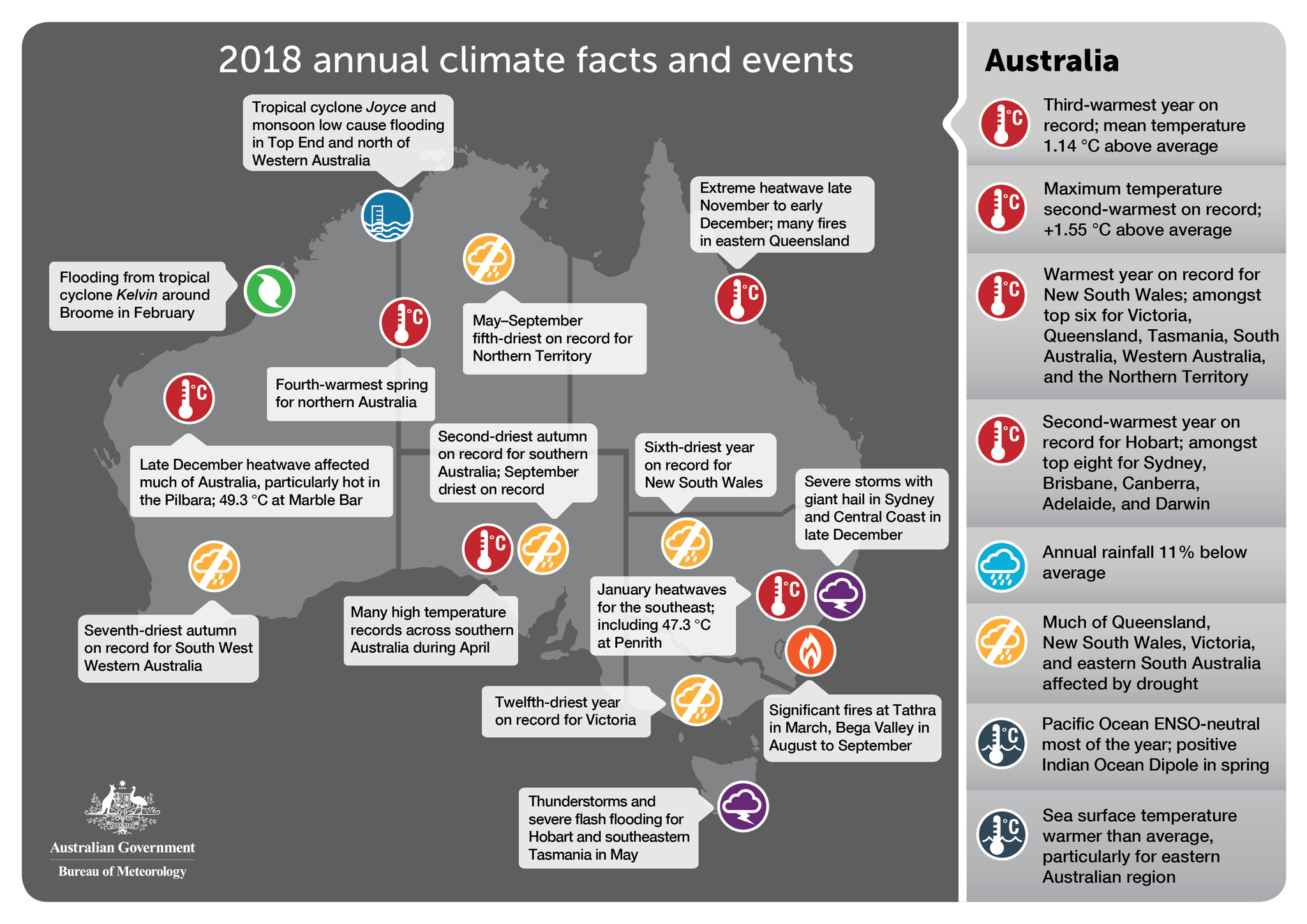 The Bureau of Meteorology (BOM) this week released its Annual Climate Statement, showing 2018 was Australia’s third hottest year on record, while rainfall totals were the lowest since 2005.

It comes amid an outcry over the mass fish death in the Darling River system at Menindee in New South Wales which has put an international spotlight on river management in Australia, with both government and the cotton industry pointing to drought for blame.

(See also this graphic report from the Sydney Morning Herald on the toll on wildlife from this summer’s extreme heat and drought, with shocking images of kangaroos and sheep stuck in the all-but dried up channels between the lakes and the nearby Darling River.”

The BOM report immediately prompted calls for the Australian Government to “take a good hard look” at its greenhouse gas pollution levels, with a warning from the Climate Council that “our window to act is closing and the Federal Government’s current efforts are an abject failure”.

“The Federal Government must adopt a credible policy, which deeply and rapidly reduces our greenhouse gas pollution if we are to effectively tackle climate change,” said acting CEO Dr Martin Rice.

As our opening story at Croakey for 2019 reminded, last October, the Intergovernmental Panel on Climate Change (IPCC) warned that we have approximately 12 years to take meaningful action to keep global warming to a maximum of 1.5C, to limit climate change catastrophe.

Have you and yours made significant changes in the way you live and work as a result of the IPCC deadline?

You can check out the Climate and Health Alliance’s (CAHA) Our Climate Our Health campaign, to learn more or become more involved in bringing positive change re the health impacts of climate change, which calls on for a National Strategy on Climate Health and Well-being.

The health impacts of climate change were raised this week in this article from global online health magazine Stat about providing medical care to a new type of migrant — “the climate migrant”. It noted that the US Fourth National Climate Assessment – quietly published late last year by the Trump Administration – emphasises how climate change is “the great amplifier”.

“(It is) not just pushing our extreme weather to be more extreme, but also making our social inequalities even more unequal. Vulnerable populations, the report noted, are particularly at risk: “Populations including older adults, children, low-income communities, and some communities of color are often disproportionately affected by, and less resilient to, the health impacts of climate change.”

“When we look across all of Australia in 2018, we can see that every single state and territory had above-average day and night-time temperatures,” Bettio said in a statement.

“The average maximum temperature for the country as a whole was particularly warm, sitting 1.55 °C above the 1961–1990 average, making 2018 Australia’s second warmest year on record for daily high temperatures.

“Average minimum temperatures for 2018 were 0.73 °C above average, the eleventh-warmest on record.

“The only part of the country to buck the trend for above average temperatures was the Kimberley region, which had cooler than average nights for the year.”

BOM said that the 2018 results mean nine of the 10 warmest years on record have occurred since 2005.

Nationally, Australia’s 2018 rainfall total was 11 per cent below the 1961–1990 average, but many areas were significantly below average, the report says. It said:

“It was a tough year for people dealing with the drought, and like the rest of the country, the Bureau hopes 2019 will bring some rain relief for those being impacted by the dry conditions.

BOM said there was respite in the final three months of the year with decent rainfall in the east of the country, particularly in New South Wales in October and November and parts of Queensland in October and December and with above average rainfall in parts of northern Australia and WA.

See below for the BOM’s list of significant weather events, fast facts, and other insights from its annual report.

In a statement declaring that Australia in 2018 was “a climate system on steroids”, the Climate Council said the latest data came as no surprise. It said:

“Climate change is intensifying around the world and Australia is no exception, as our climate system continues to set new extreme heat records.”

“Nine of Australia’s hottest 10 years have occurred since 2005, so the extremes in 2018 are part of a long-term trend, being driven by intensifying climate change.”

“December 2018 was Australia’s hottest on record, with record-breaking mean, minimum and maximum temperatures.”

“At this point, if all countries were to adopt Australia’s current policies we would be on track for a world that’s at least 3°C warmer than the era prior to mass industrialisation. This would have disastrous consequences for billions of people.”

“Our window to act is closing and the Federal Government’s current efforts are an abject failure.”

Before they disappear: Treasured UNESCO sites at risk from climate change

Weather 2018: This is your story, Australia: ABC feature

How fast are the oceans warming? Science