As we call for entries in the next edition of The Gavin Mooney Memorial Essay Competition (see here for details of the mental health-related topic), it is timely to reflect back on the inaugural competition’s topic of climate change and equity.

Many thanks to Emeritus Professor Tony McMichael for taking the time to review the e-book (freely available here) compiling the top five essays.

The Gavin Mooney Memorial Essay Competition honours the work and memory of the late Professor Gavin Mooney, a health economist and long-time advocate for social justice. The competition seeks to heighten public awareness of social justice and health equity concerns.

In 2013, the competition’s first year the assigned topic was Climate Change and Equity. The top five entries chosen by the panel were:

1 Tim Senior: ‘Climate change and equity: whose language is it anyway?’

The equity and social justice dimensions of climate change have many and overlapping facets. Issues include retributive justice in redressing the historical emissions imbalance, distributive justice in needs-based sharing of international adaptation assistance funds, addressing priority needs of high-vulnerability groups or regions, and intergenerational equity. The list is long. Who is currently responsible for exacerbating the problem? Should they be bailed out with tax-payer money? Who should be involved in decision-making?

Intriguingly, while there are economic aspects to most such choices, none of the five top essays were by card-carrying economists. Gavin Mooney would, I think, have been pleased that the relations between economic precepts, the complexities of climate change and the over-arching considerations of environmental, social and political justice are not here confined within an orthodox economic frame.

In the winning entry, Sydney GP Tim Senior explores, first, the gap between the concepts and language used by scientists and well-informed others versus those used by the general lay public (e.g. his patients). He writes:

“… anyone talking about climate change in the terms I’ve described – sea-level rises, ice sheets, average temperature rises, greenhouse gases – is not in the groups who will suffer most of the effects, either now or in the future. Those affected now talk about bushfires. They talk about floods, hurricanes, drought, crop failure, increasingly salty water, rising food prices.”

The language gap also applies between the political left and right. Conservatives do not much like words such as equity, fairness and justice. Senior cautions that their injudicious use can confirm conservative suspicions that ‘climate change’ is cover for establishing a future socialist utopia.

He then moves on, using anecdotes and examples, to a critique of how we learn, think and act. The crucial distinction, he states, is between knowing about something (which modern Western science and education extoll) and actually knowing something. “But knowing about things has also led to a devaluing of personal, subjective knowledge, the lived experience, knowing things themselves.”

His examples include approaching religion via scriptural-factual analysis rather than through emotional and spiritual experience. The increasing information-dependence of modern literate societies, he suggests, further widens the gaps between groups with differing access to understandable information. This reinforces the disconnect that bedevils communication, and hence engagement, across the full breadth of society, leaving some groups ‘on the outer’.

Senior’s final point is that stories, not facts, are best at changing people’s minds. We should “frame climate change problems in a way that relates to everyday experiences. … we need to be able to show unequivocally that we care as much for those who will be most affected by climate change as we do for polar bears.”

Steve Campbell (environmental campaigner) and Lucie Rychetnik (background in public health and medicine) argue that, despite well-known differences in historical emissions and hence the inequity of the climate change impacts, the traditional ‘rich world versus poor world’ equity argument has largely failed in international negotiations. Meanwhile within many countries, linking equity and climate change is discounted as left-wing rhetoric. In both cases there is a well-worn and obstructive ‘them and us’ dichotomy.

They therefore propose reframing equity so that that most of ‘us’ are on the same side … namely, at risk from climate change. This redefinition of the them-us divide, differentiating those with vested interests who amplify the problem from the majority who bear the consequences (but who are manipulated into passivity by specious arguments and monied power).

This reframing, they argue, would link the majority ‘us’ with the already acknowledged underprivileged. It would raise new, revealing, ethical arguments – over, for example, the vast profitability of a fossil fuel industry that receives huge tax breaks and subsidies at “our” expense.

Oscar McLaren (journalist, lawyer) focuses primarily on a critical discussion about the intergenerational equity issue of conventional economic discounting of the ‘value’ of the future. Where Nicholas Stern, for example, argues against future discounting, others proclaim that ongoing wealth accumulation by a free-market economy means that future generations will have much greater piles of money to work with. But, McLaren points out, neoliberal economics cannot work for everyone – as also concluded by the recent work of Thomas Piketty.[i]

Dora Marinova (innovations, indigenous values and ‘sustainometrics’) and Peter Boyer (climate-science journalist) explore the fundamental equity issue posed by persistence of the world’s rich-poor gap. They cite Delys Weston’s ideas[ii] about how disruption of Earth’s operating system in a still seriously unequal world will engender the terminal crisis of a system that disregards the basic needs of the “billions of current and future generations of people who share a finite planet.”

Finally, Fergus Green (policy analyst, lawyer) argues that the prevailing ‘TTT’ paradigm of inter-governmental negotiation, based on treaties, targets and trading, is procedural, formulaic and lacks long-term vision. It misguidedly pursues an ‘ideal-maximal’ ethical formula in a non-ideal world where promises are made to be broken. The Kyoto targets have failed via unethical manoeuvrings by rich countries, special pleading and abandoned commitments.

Humans as complex pluralists, he argues, will respond better within a larger ‘pragmatic-idealist’ frame, with a more permissive goal and flexible pathways. With an agreed generic goal (e.g. decarbonising the global economy by mid-century), effective action must come from forward-thinking activists, business people, researchers and community groups who, together, can change corporate and government behaviour. We should move into a more ‘romantic’ pluralist-ethic mode – with bold visions, evocative human-based storytelling and a ‘friend/enemy’ distinction that shames those inimical to sustainable prosperity.

There is much more to think about in this commendable set of thoughtful essays. This is a wonderful way to commemorate Gavin Mooney. 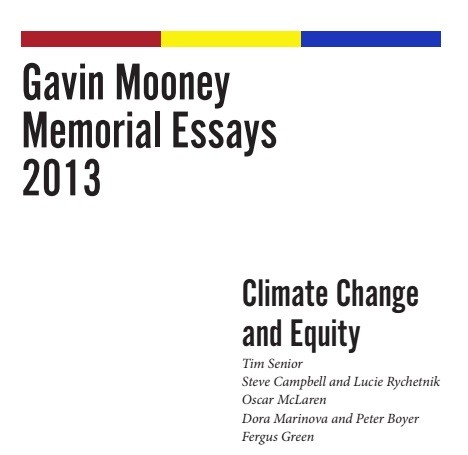