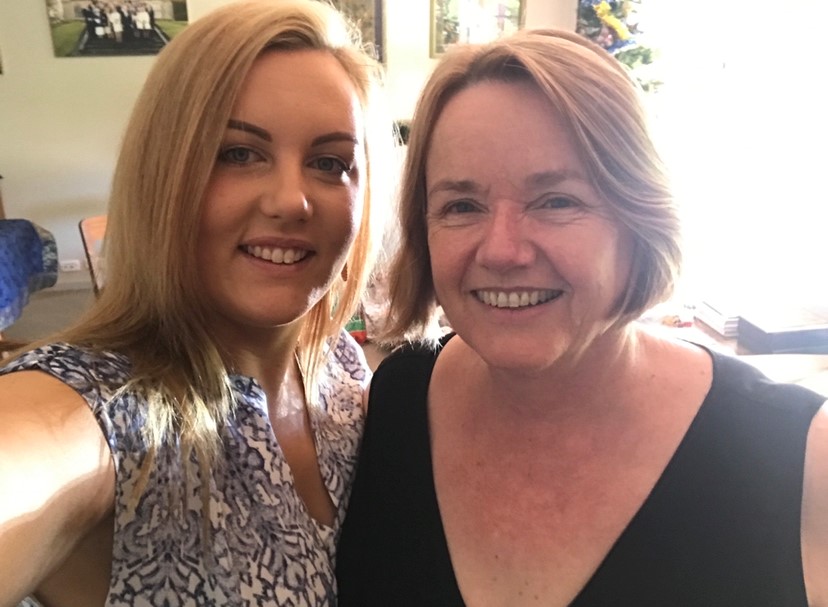 Policies that keep people cut off from their loved ones should never be the accepted norm. Alison Verhoeven (right) and niece Tamara Salins.

Introduction by Croakey: National Cabinet’s decision to halve the number of international arrivals to Australia is yet another blow to the 34,000 Australians overseas trying to return home, and to many Australians wanting to leave to see or care for loved ones.

The border lockdown has played a critical role in controlling the coronavirus, but as the pandemic stretches towards the 18-month mark and Australia lags in its vaccination rates, the restrictions are imposing a wider toll, prompting ugly scapegoating and raising human rights questions.

Alison Verhoeven’s parents-in-law are both aged 95 and live just outside of Belfast, where the Delta variant is currently driving yet another worrying increase in incidence in daily case numbers.

It’s been a relief for their family that they have kept well throughout the pandemic and are still able to live at home, particularly given that aged care residents in Northern Ireland to date have made up one-third of the 3,000 people who have died there from COVID-19.

But with no family nearby able to look after them, it had long been Verhoeven’s plan to head with her husband David to Northern Ireland to provide care and support once she retired from health sector leadership last month.

However, Australia’s border restrictions have thrown these plans into doubt at a critical time.

With a population of 1.9 million people, Northern Ireland is currently recording more than 500 cases per day of COVID.

About half the population is now fully vaccinated but, like the rest of the United Kingdom, restrictions are set to lift, prompting headlines warning that those at risk fear they will have to ‘play Russian roulette’ with their health from 19 July.

Talking about her family’s concerns, Verhoeven is quick to acknowledge how relatively fortunate they are, considering the distress and dislocation being experienced by so many people due to Australia’s COVID-19 border closures.

She points to the recent heartbreaking story of a Queensland man, now living in Canada, whose mother died while he was stuck in hotel quarantine.

But still, she says, countless families are experiencing the anxiety and loss of being separated from loved ones overseas for nearly 18 months, with many like hers in limbo.

“It’s not necessarily clear that you can’t go,” Verhoeven says. “In fact, there are mechanisms to apply for, for example, compassionate circumstances to leave.”

Verhoeven’s grown children have also been hit by the border controls, unable to see their father, who lives in Taiwan, for two years.

Yes, they cope as so many do, with Zoom calls and other ways to stay in touch.

But they don’t get to see each other in person and Verhoeven is disturbed by an emerging narrative “that we should all just stay here and be happy to be here, that we shouldn’t actually need to go anywhere or come back from anywhere”.

The reality, she says, is about half of Australians have close family living overseas or live overseas themselves.

“I think it’s really important to highlight that these are normal relationships and that these aren’t extraordinary circumstances where people have wilfully left the country for a holiday jaunt, gone overseas because they wanted to see Machu Picchu or climb the Eiffel Tower,” she says.

“These are normal family relationships, normal dynamics that a lot of families in Australia experience and we need to have a plan to be able to think through, how are we going to deal with that longer term for the fabric of our society to remain whole.”

It’s a warning that’s also been sounded recently by both Australia’s Human Rights Commissioner Ed Santow and the Human Rights Law Centre in a submission, titled ‘Families left behind’, to the Australian National Audit Office (ANAO), which is investigating the management of international travel restrictions (and due to report in November).

Santow has said caps on the numbers of people returning to Australia can be a legitimate response to protect public health, but they can also cause “enormous hardship” for those who can’t get home.

The Human Rights Law Centre takes a stronger view on Australia’s restrictions, which have prevented anyone except Australian citizens, permanent residents and people with special exemptions from entering Australia since 20 March 2020.

It describes them as “arbitrary and inconsistent” and having come “at a huge cost” to many people, saying the Federal Government has “failed to uphold the standards of care, compassion and respect that we expect of our Government in a time of crisis.”.

It cites the suspension of Australia’s offshore humanitarian program, which has left over 7,000 people stranded in dangerous situations, the “discriminatory blanket ban” on travel from India, “which left families in turmoil and potentially contributed to the deaths of Australian citizens”, and an “unreasonably high threshold for compassionate leave exemptions”.

In a statement, Human Rights Law Centre Senior Lawyer Josephine Langbien says equity and rights are now at stake with restrictions that were understood originally to be temporary but remain in place more than 15 months on.

That’s made more unfair when, in reality, international travel is still allowed, Langbien says, noting that people are coming in and out of Australia every day for business, politics, and events while the  “complex web of restrictions and exemptions” is leaving many families indefinitely separated.

“While wealthy investors and people on business trips are allowed to travel, many people cannot see their parents, their fiancé, their brother or sister if they are not Australian residents,” she said. Policies that keep people cut off from their loved ones “should never be the accepted norm”.

That inequitable queue also disturbs Verhoeven, who says politicians, businesspeople, actors, sports players and others have been able to move in and out of Australia, “yet we’re not considering family relationships, and how we can support that in a sensible and a compassionate way”.

Verhoeven is frustrated that the Federal Government did not plan more purpose built quarantine facilities last year, and also by the “woeful” vaccination rollout that is keeping the border closed.

She says those blaming Australians abroad for not returning earlier don’t acknowledge the realities of peoples’ lives and circumstances.

Many can’t return permanently, she says. They live in other countries, where they have work and family commitments. “But that shouldn’t mean they should not be allowed to come home to visit loved ones or provide care,” she says.

She says Australia needs to provide a roadmap, not just on arrival numbers, but on what exemptions will apply over time and how restrictions may shift for people who are fully vaccinated and want to enter Australia.

Verhoeven’s niece, Tamara Salins, lives in Dubai with her husband but has needed to come home twice during the pandemic for family and medical reasons and has done two stints in hotel quarantine, although she is fully vaccinated.

Salins, a flight dispatcher who lost her job when the pandemic began to hit the airline industry hard, says she has “really struggled” with hotel quarantine in Australia, with pre-existing mental health issues making it “very challenging”.

In contrast, she is not required to quarantine when she returns to the United Arab Emirates, where around 74.5 percent of the population has received at least one COVID-19 vaccine dose while 64.3 per cent are fully vaccinated versus Australia’s number, which has just gone over 10 per cent.

Salins has friends in Dubai who she says haven’t seen family in Australia for more than two years because the costs of inflated air tickets and hotel quarantine are prohibitive.

She wants to see restrictions changed so that anyone who is fully vaccinated can do home quarantine when they arrive in Australia. As well, she says hotel quarantine should not be charged out to individuals, but covered by the state because it is required under legislation.

But she acknowledges that her views are not popular in Australia. She’s been told, even by people in her own family, that she shouldn’t be permitted to come back unless she is repatriating.

Salin sees Australia as being “super protective and proud” that it has kept COVID-19 largely at bay because of its international border controls, which she initially supported.

“But I don’t think they are adapting fast enough now for the way that the world is changing and that is very frustrating to watch,” she said.

The Human Rights Law Centre highlights a number of groups who have been unfairly treated by the border controls. They include people who are engaged to marry and hold Prospective Marriage visas.

That has currently stranded one Australian woman, Rachel, whose family is known to Croakey but who doesn’t want to give her surname because of the amount of “hate” spewed out on social media to many in her position.

Rachel left Australia in March to join her Nigerian partner after the couple applied unsuccessfully, eight times, for a travel exemption for him.

She knew it would be hard to get back but, at the time, “Australia’s situation appeared quite calm, airlines were booking to the caps, and not many people were being bumped off planes”.

Now, stuck in the Ukraine where he is studying, fares are going through the roof and uncertainty rising. Their current economy flight choices to get back to Sydney vary from $6000-13,000, with no assurance the flights will go ahead. She is living off her home deposit savings and faced with having to move around Europe to renew her visa when it runs out.

Rachel says she knows many in similar positions who have struggled to take up opportunities for repatriation flights. Either they only take off from certain hubs, which can be hard to get to, or “you don’t get enough warning to pack up your life, end job contracts, give notice on your lease etc”.

But it’s the vitriol and scapegoating of these people that she finds most shocking.

“Politicians have disguised their inability to be proactive about the threats posed by COVID [so] they have made ‘Stranded Aussies’ the scapegoat for peoples’ fear and as a result some truly awful things are being said,” she told Croakey.

“I read so many heartbreaking stories from people who have had flight after flight cancelled and who have tried to share their story only to be destroyed on social media.

“People in Australia are living under a blanket of fear, but it seems to me that because of this many have lost their compassion and humanity.”