Bureaucracy and technology are major barriers to effective patient care across the fragmented silos of Australia’s health system, but the key to better integration lies in communication, relationships and an approach that considers the person – and all the determinants of their health – before their diagnoses.

This was the central message of a summit last week examining how and why patients fall through the cracks of Australia’s complex, unwieldy and sometimes dysfunctional tripartite health system.

Primary Care: complex, messy and more important than ever

The Centre for Primary Health Care and Equity’s (CPHCE’s) annual forum put health system integration under the spotlight, profiling a series of research projects at the interfaces of primary care with emergency departments, allied health and cancer care.

While the panoply of stakeholders — each with discrete and often incompatible technological interfaces — was a significant challenge, there were often much more fundamental issues at play involving communication and relationships, the forum heard.

These were hurdles common to, and between, GPs, specialists, and patients alike, underscoring the importance of language, narrative and connection, which were some of the central themes of the Ian Webster Health For All Oration, delivered by Jean Frederic Levesque, head of the NSW Agency for Clinical Innovation. We previewed his address at Croakey here.

Introducing the talk that carries his name, Emeritus Professor Ian Webster Webster AO, a towering figure in public health and long-serving chair of CPHCE’s advisory committee, stressed that in an increasingly market-driven, biology/precision medicine-focused world, primary care was more important than ever.

Though it was messy, Webster said primary care was also real and authentic, reflecting the human condition and encountering people at their most vulnerable.

Levesque described health care as “very complex systems made of human beings and a lot of moving parts”, and stressed the importance of language and narrative in primary care – a fundamentally human science.

This was not only so “we really understand the realities of the people that we want to influence”, but so that interventions were framed in a way that way that ensured they were relevant and accessible, particularly when working with Indigenous and other priority groups, he said. 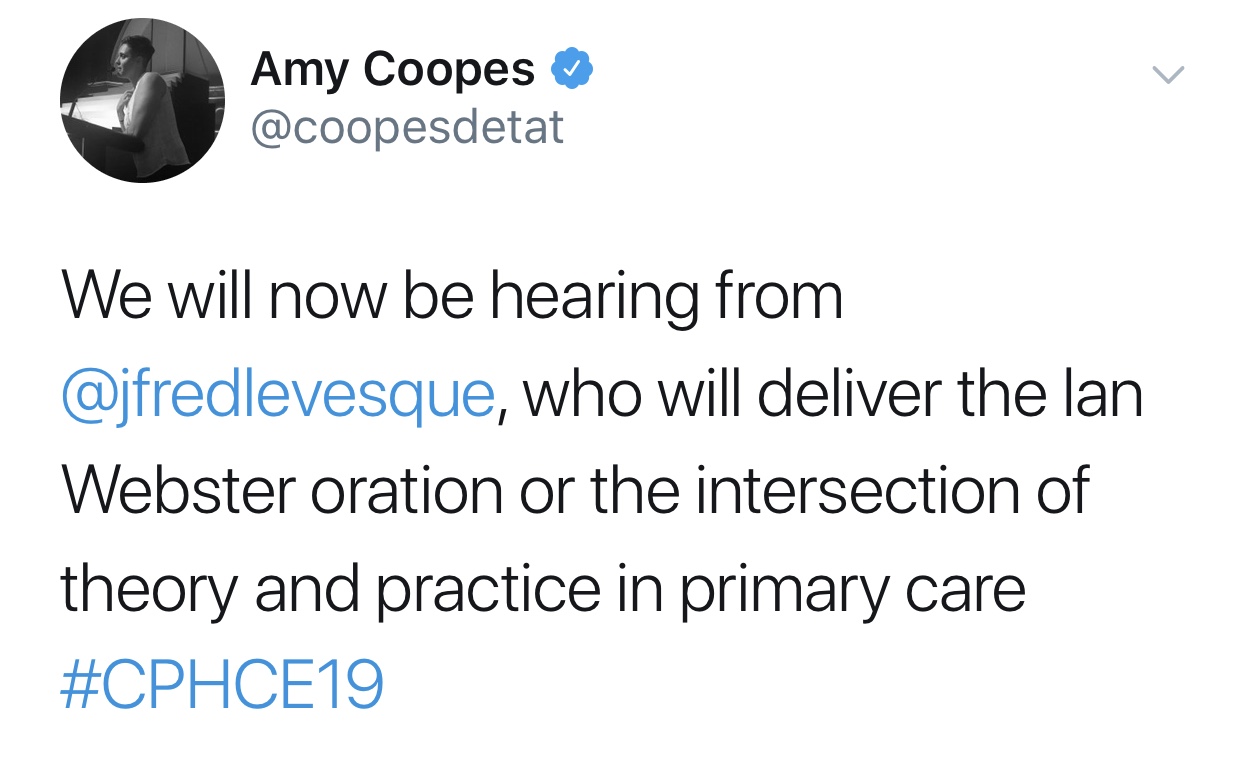 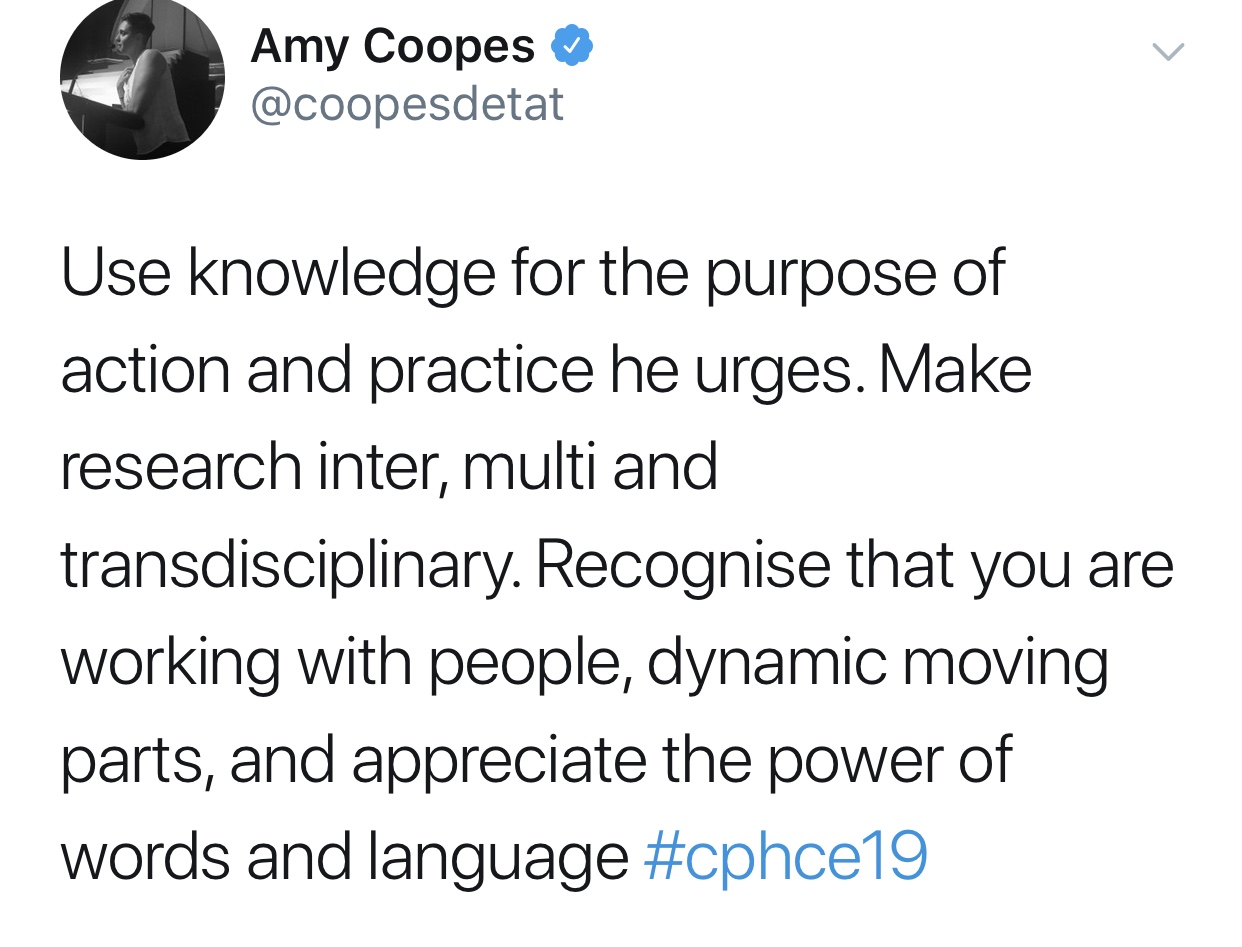 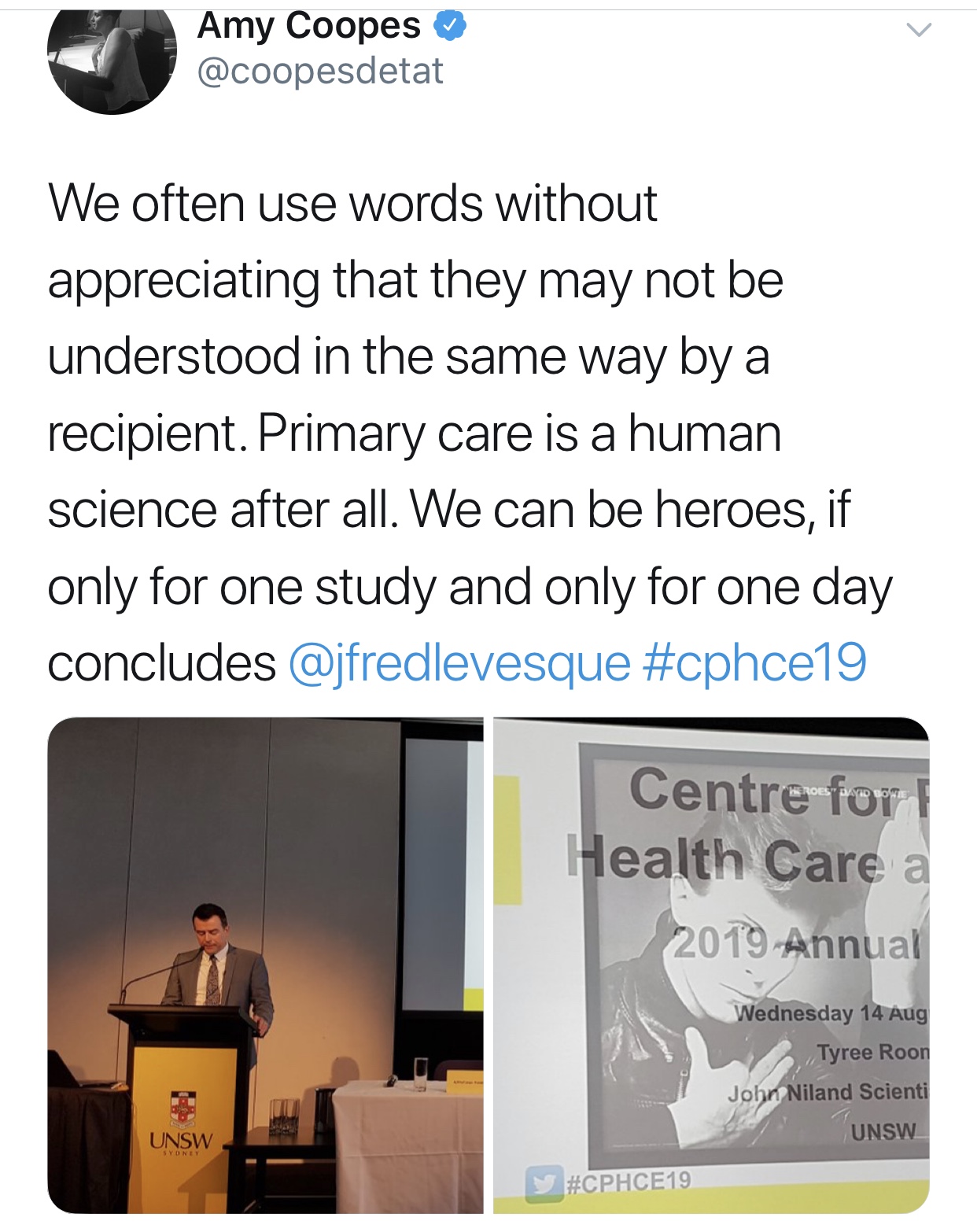 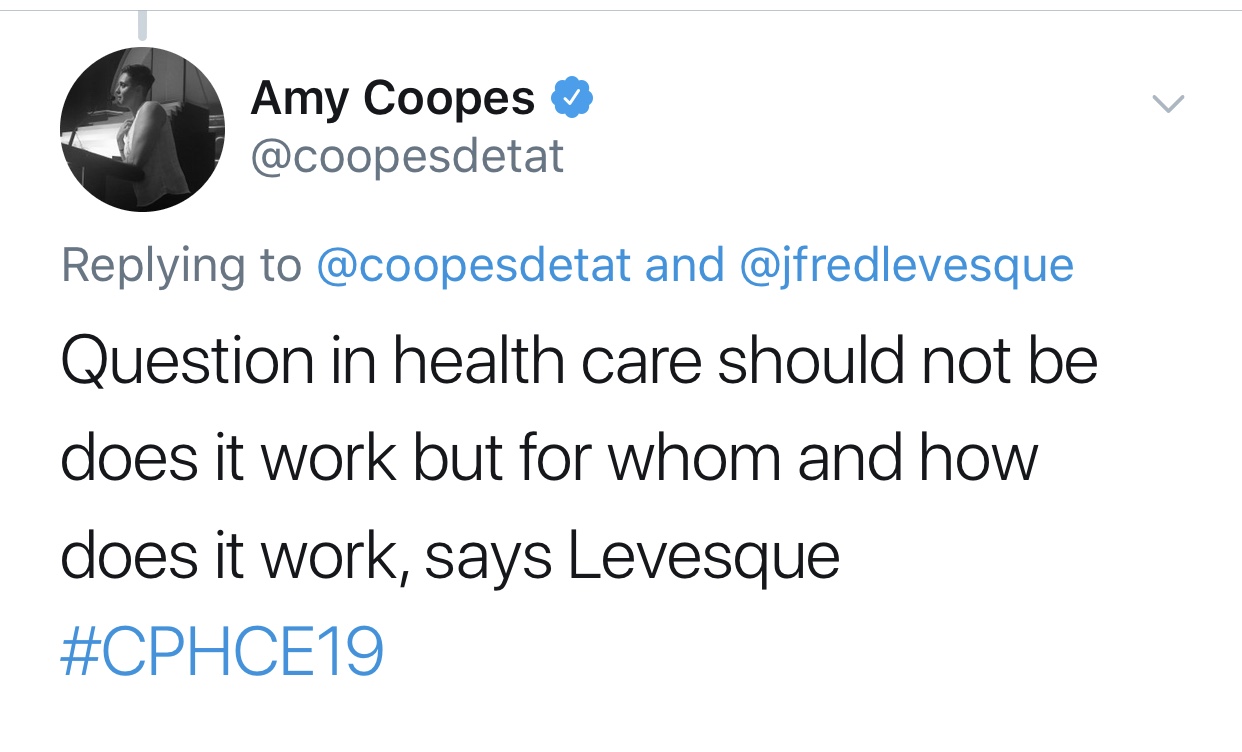 Levesque is renowned for developing the access framework in primary care, a theoretical model placing the person seeking care at the centre of the process, and recognising all the drivers of and potential diversions to that journey.

Levesque explained in an interview with Croakey at the forum:

Are they able to identify where they need to go to receive appropriate care, can they actually go there and reach those services?

And once they are in the practice, can they actually get the right care from the provider given their capacity to talk about their symptoms and at times negotiate with the providers about what they need and want?”

The Emergency Department emerged as a key pressure point for integration at the forum, with several studies examining the fate of patients once they were discharged from the ED back into community care.

Describing the process as “perhaps the archetype of disintegration in the health care system” with the unfortunate patient serving as the bridge between two very distinct clinical worlds, Knight said it was a high-risk context for duplication, readmission, cost and dissatisfaction.

Hoping to better understand from the perspective of those working on the frontlines what the barriers were, Knight and his colleagues canvassed 19 ED personnel and 20 GPs from the surrounding catchment for their views. Their findings were grouped around three key themes:

EDs might get correspondence from community doctors, from GPs, that they might think might be a little bit hopeless; and as a GP I might sometimes have the same thoughts receiving discharge communication from the ED, even though at a theoretical level we kind of know that people are trying to do their best within their respective health sector.”

As well as barriers, the researchers asked participants to come up with practical suggestions to overcome them, and Tam said work was now underway to rolling some of these out.

Tam presented three connected studies looking at followup of older patients after ED discharge, which had some sobering findings.

Though the majority of people (76%) did follow up with a GP the week after they left the hospital, there was a marked discrepancy by gender, with men (90%) much more likely to do so than women (two thirds), which Tam noted was counter to usual primary care patterns.

A separate study of an exclusively older female cohort revealed a number of factors were at play, including social supports (about half were widowed), access to transport (many did not have a licence), language barriers (most spoke a language other than English), and perceptions of themselves as an inconvenience to others.

Tam said the way followup was framed and communicated to the patient and their family in the ED was also important: if it was emphasised as an essential part of ongoing care rather than a box-ticking exercise, people were more likely to follow through.

The final project, which was still in the data analysis stage, underscored just how significant language barriers could be. Among 172 ED patient-doctor pairs recruited for the study, Tam told the forum a professional translator was used precisely zero (yes, zero) times, a significant gap “between what is perceived as best practice, and what is taking place”.

Associate Professor Margo Barr, an academic from CPHCE, also presented work on GP followup after hospitalisation, and on the burgeoning presentation of older patients (aged 75+) to emergency departments, drawing on data from the 45 and Up study.

Barr’s research identified a particular cohort of older people who were landing in the ED as a result of access gaps, being ineligible for a health care card and bulk-billed primary care but also unable to afford private health insurance or out of pocket costs.

Looking at followup, some of these themes recurred, with older males with lower household incomes and no private cover more likely to see a GP within 2 weeks of being discharged from hospital.

Overall, she said it showed just how critical communication could be”

One of the main things that is coming from the research we are doing, and the work of others, is improving [communication].

(It’s) being told to go back and see their GP, and being sure that both the hospitals and the GPs are aware that there is a benefit from doing that.”

Barr’s research group also explored the impact of social isolation and living alone – terms that she said were often used interchangeably but were actually shown by the data to be quite distinct profiles.

Only three percent of people were identified in their research as belonging to both groups, and living alone was shown by the models to actually be protective against isolation.

As people age and they do live alone there’s lots of factors that are happening in their lives, but it’s also a measure of resilience and independence. So it’s nice to look at the data and not immediately think that people that live alone are socially isolated or lonely.”

Finally, Barr presented some work on care plans in general practice, and the effectiveness and appropriateness of their use in terms of who was getting them and whether they were having an impact on hospitalisations or ED admissions. The presentation generated some interesting debate online. 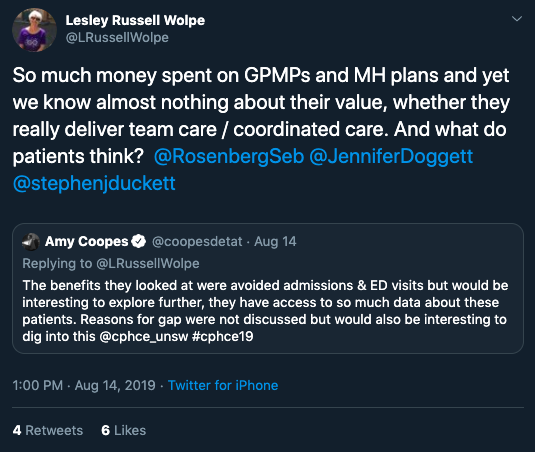 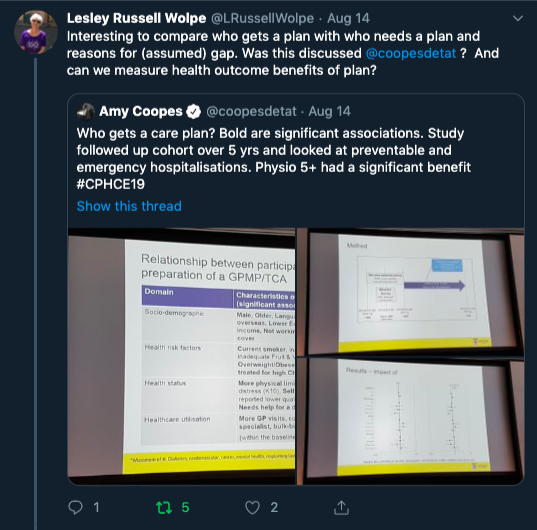 Broadly speaking, she said, the data showed that the people who most needed care plans – those with complex chronic diseases, disadvantaged and older populations – were getting access to them, but whether or not they were reducing tertiary presentations was a bit more of a “mixed bag”.

The more times that you were able to access a physiotherapist, then we were certainly seeing a decrease in hospitalisations.”

Barr said the findings suggested that capping care plans at five allied health visits per year across a range of different specialties could be limiting their effectiveness.

Her team also found that care plans were infrequently reviewed by GPs, which she said was another important issue.

You can read more about Barr’s research here.

Watch our interview with Margo Barr:

The proliferation of patient management systems at state, local and practice levels was highlighted as a hurdle to continuity of care by several speakers, including Jane Taggart from CPHCE, who presented a pilot study into a shared health record for cancer patients called inca.

By creating a secure web-based record accessible by the patient and members of their care team, including their oncologist and GP, inca aimed to bridge the gap between specialist cancer care and follow-up in the community.  Taggart said the need for a comprehensive, accessible record was increasingly important as more people were diagnosed and treatments improved, extending survival, and the long-term surveillance and management role for primary care.

Taggart shared some of the teething problems and systemic challenges to rolling out such an initiative, including governance, funding and scalability, but she also said it was a promising model, particularly in spaces like mental health and drug and alcohol, where a multiplicity of providers and fragmentation of service provision could be a real issue for patients.

Speaking on a panel, Andrew Simpson, who works in mental health shared care for the Sydney Local Health District, said the 14 to 23-year mortality gap for people with a severe mental illness illustrated how important holistic, integrated care could be. 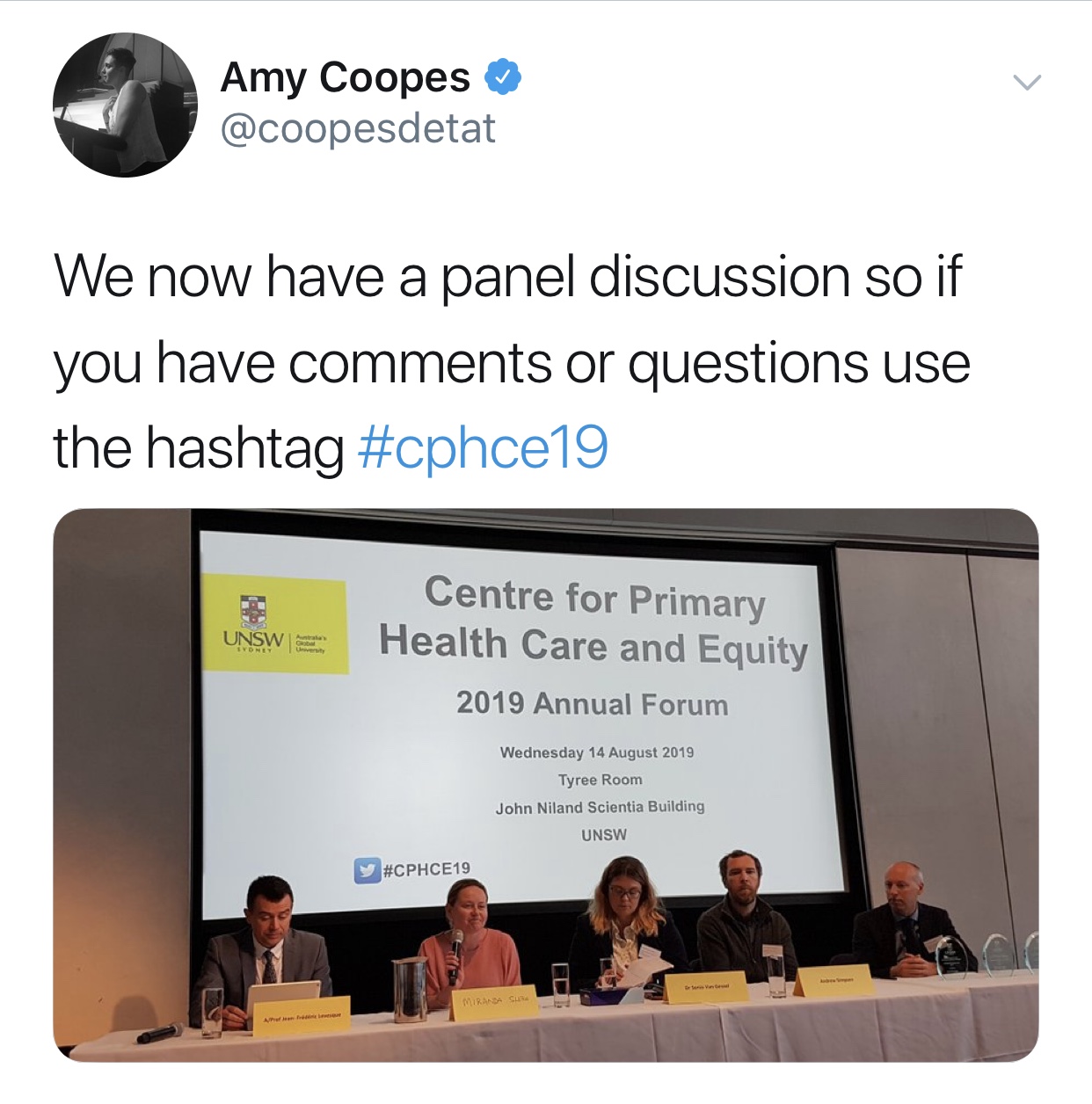 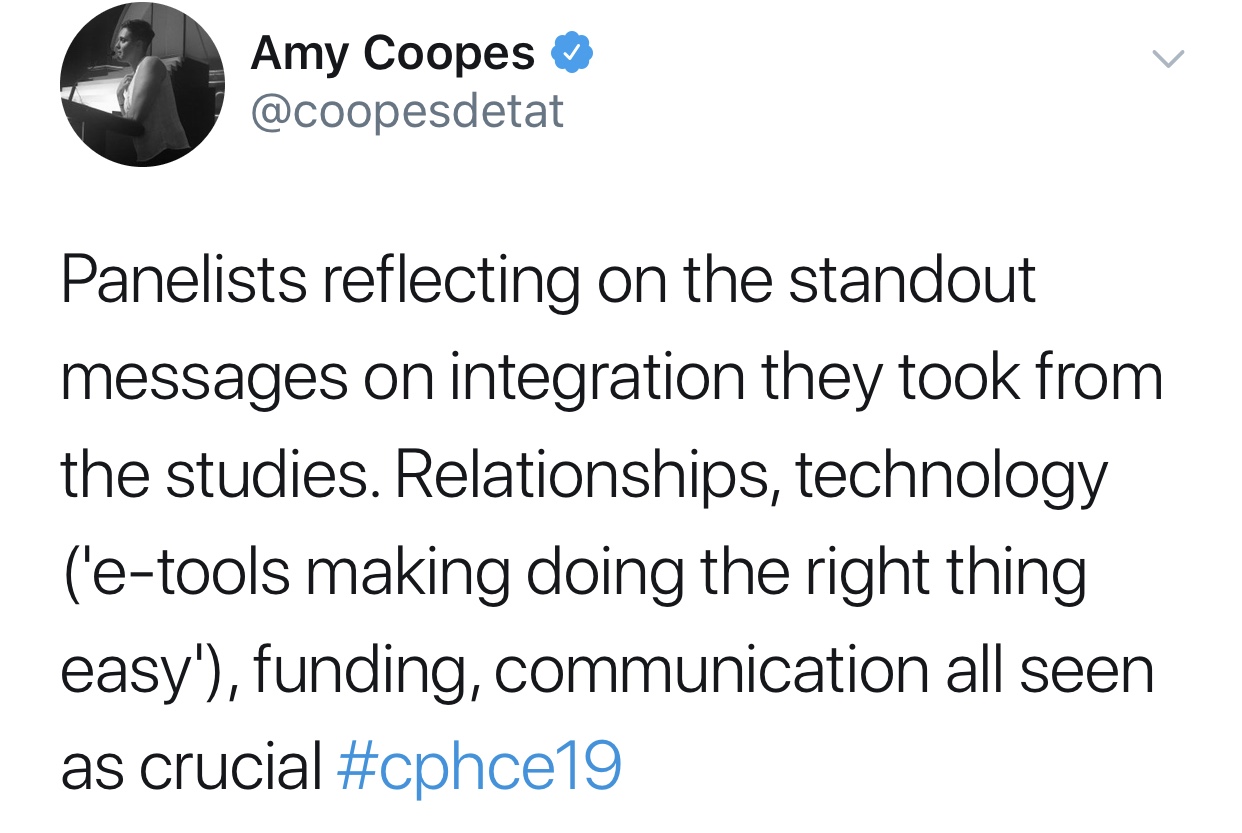 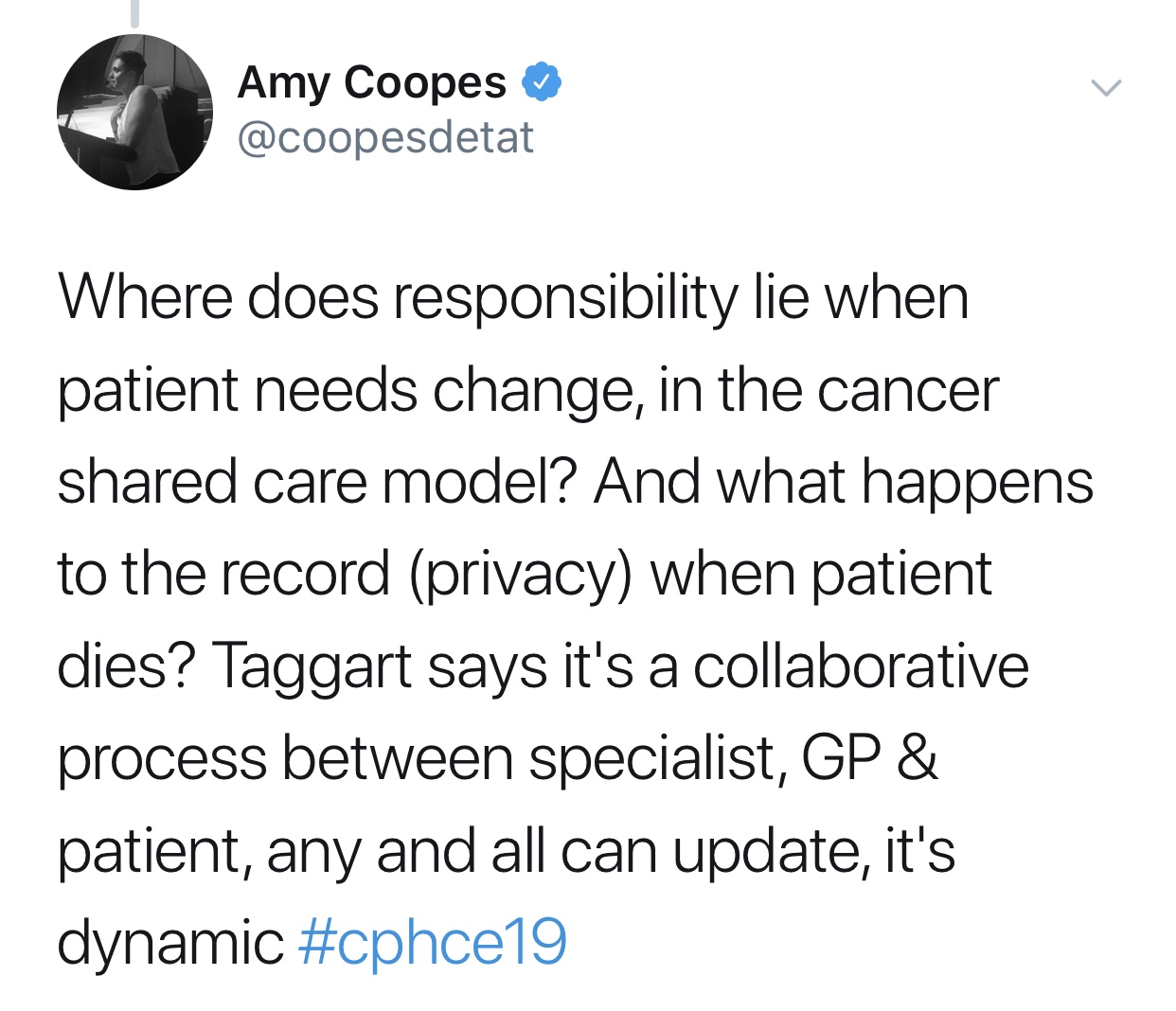 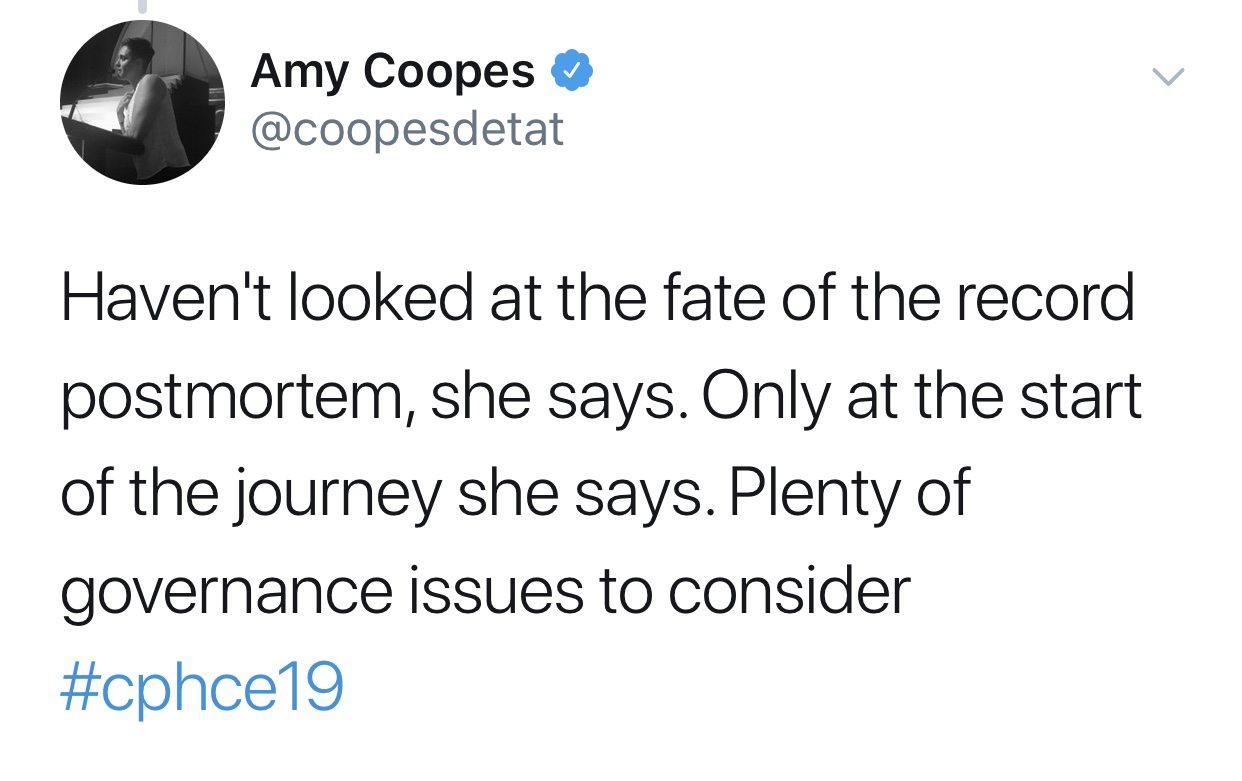 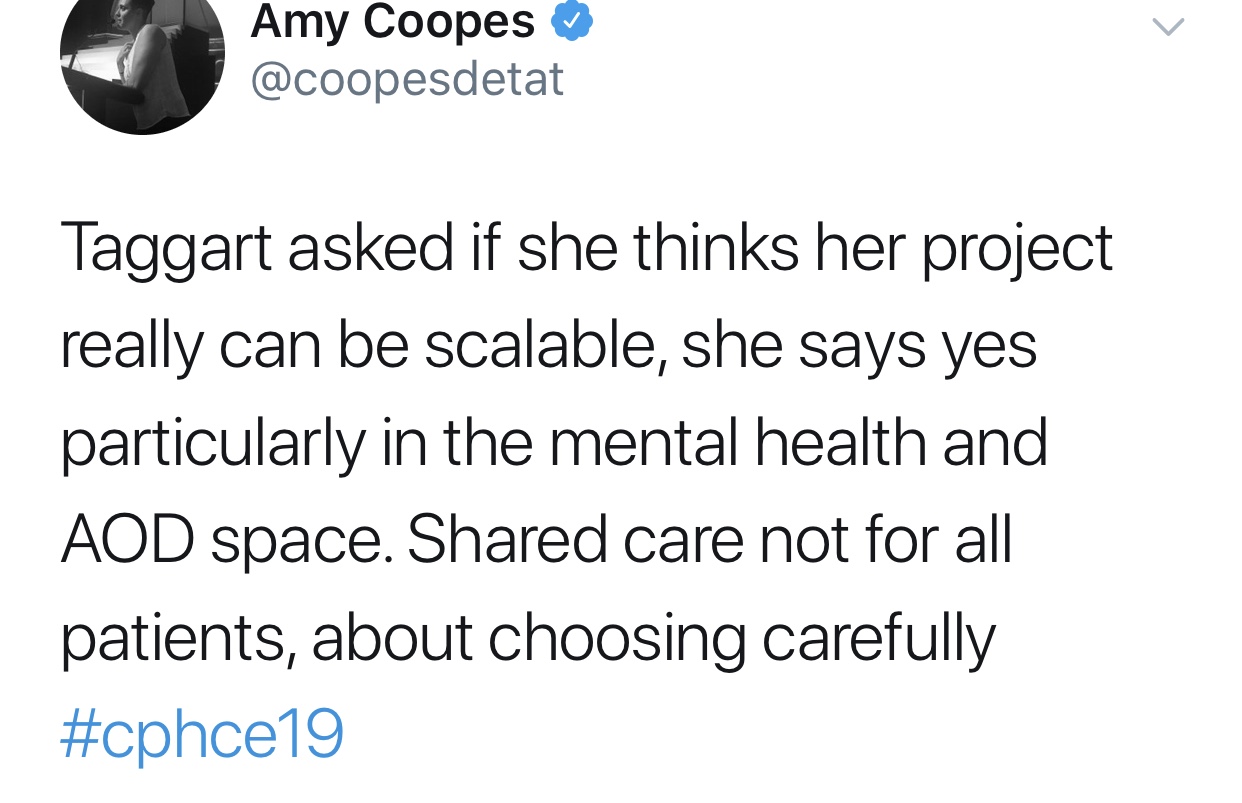 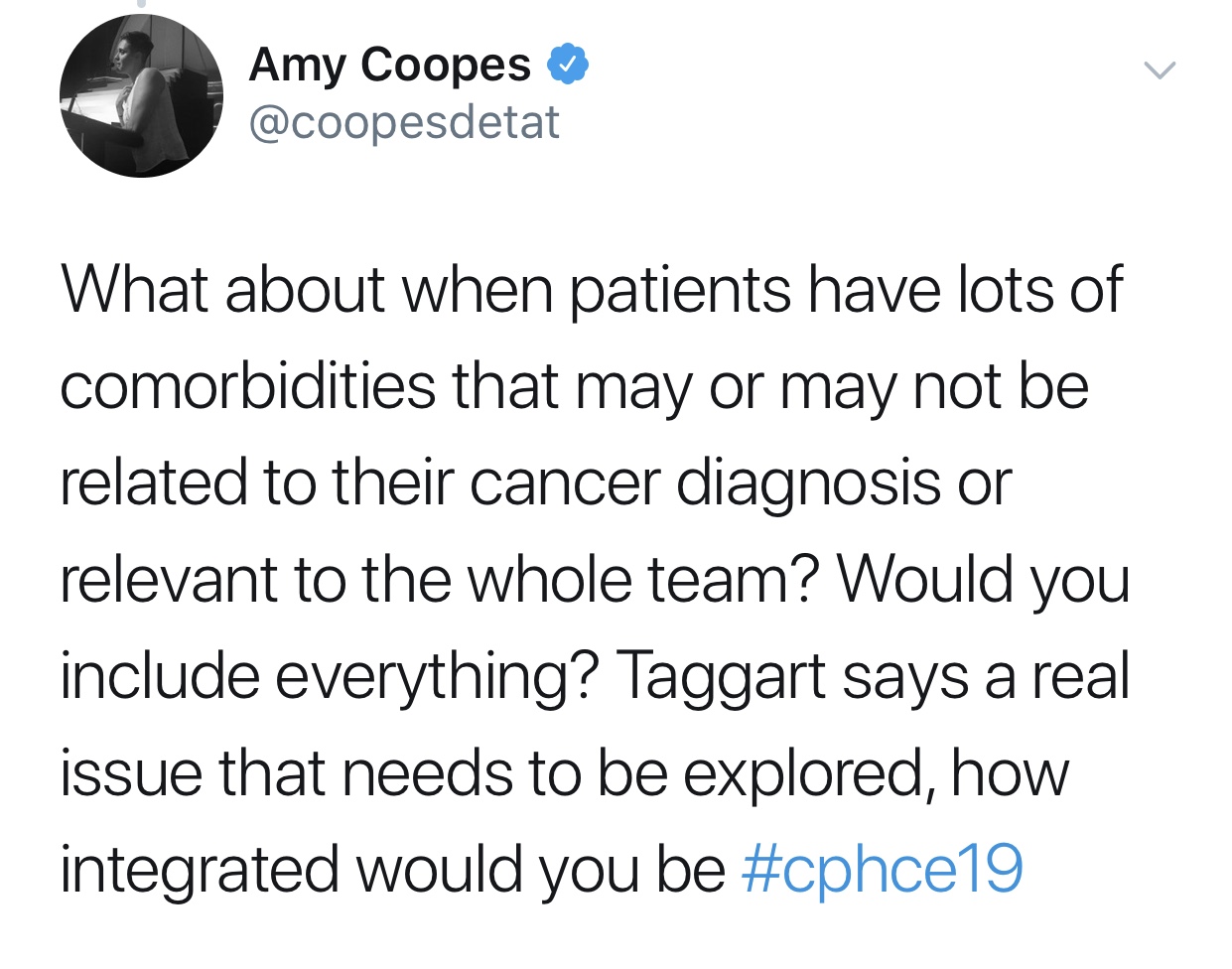 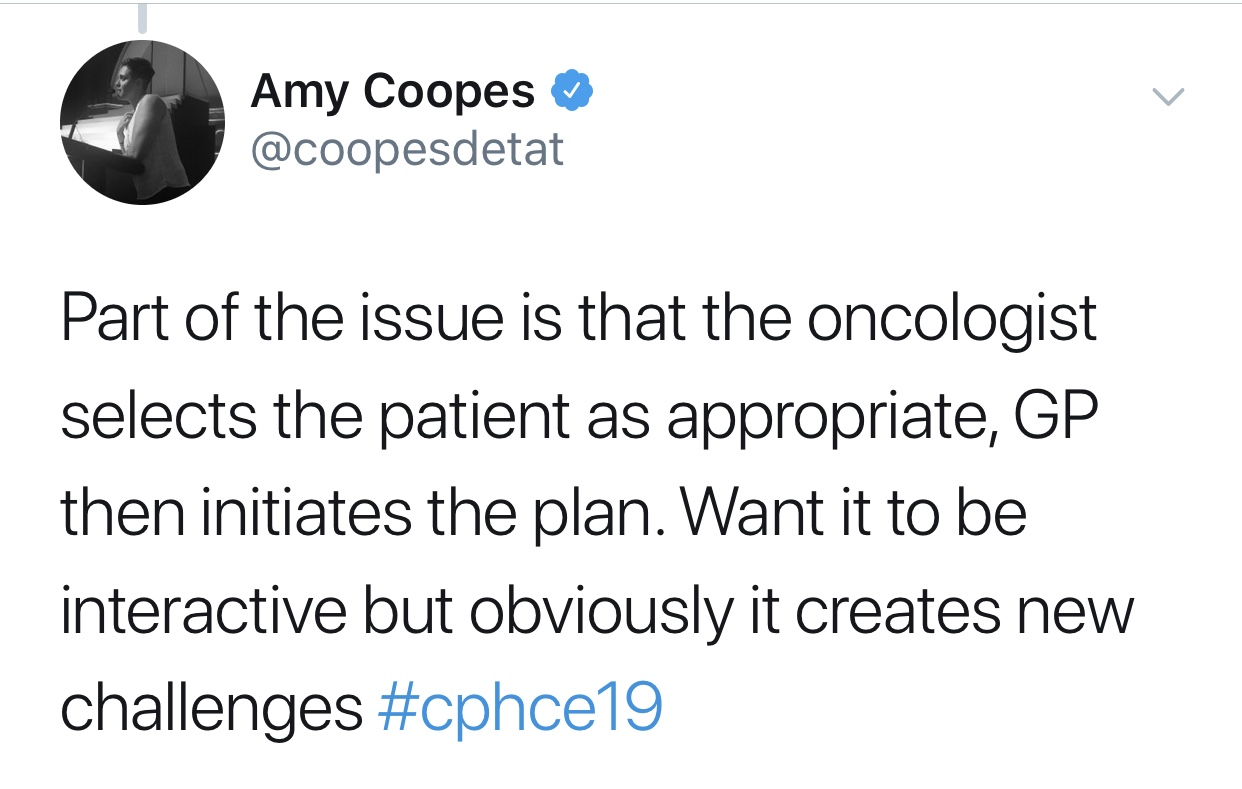 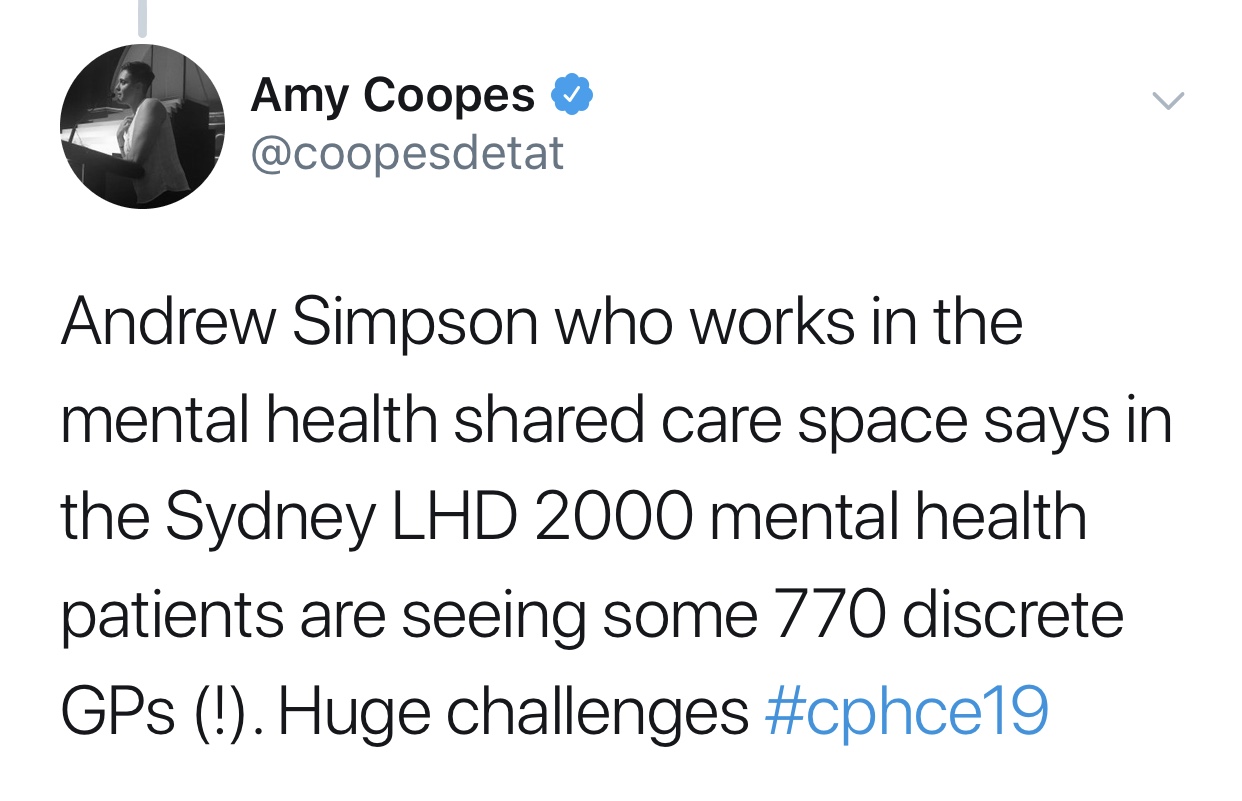 While tech tools that made “doing the right thing easy” were seen as part of the solution to integration issues, they were no silver bullet.

The forum urged a greater focus on the people health systems were supposed to serve, and for this to encompass all the determinants of their wellbeing, not just biomedical factors, with relationships and communication integral to success.

If we are to address the various aspects of inequity in access we cannot just work at the clinic level with the providers, we really need to mobilise the community.

Ultimately we need to work on people’s abilities to engage and appropriately access healthcare, while at the same time also reorganising the way we deliver care, and this can really only happen through a conversation and a partnership in trying to improve health care for these communities.” 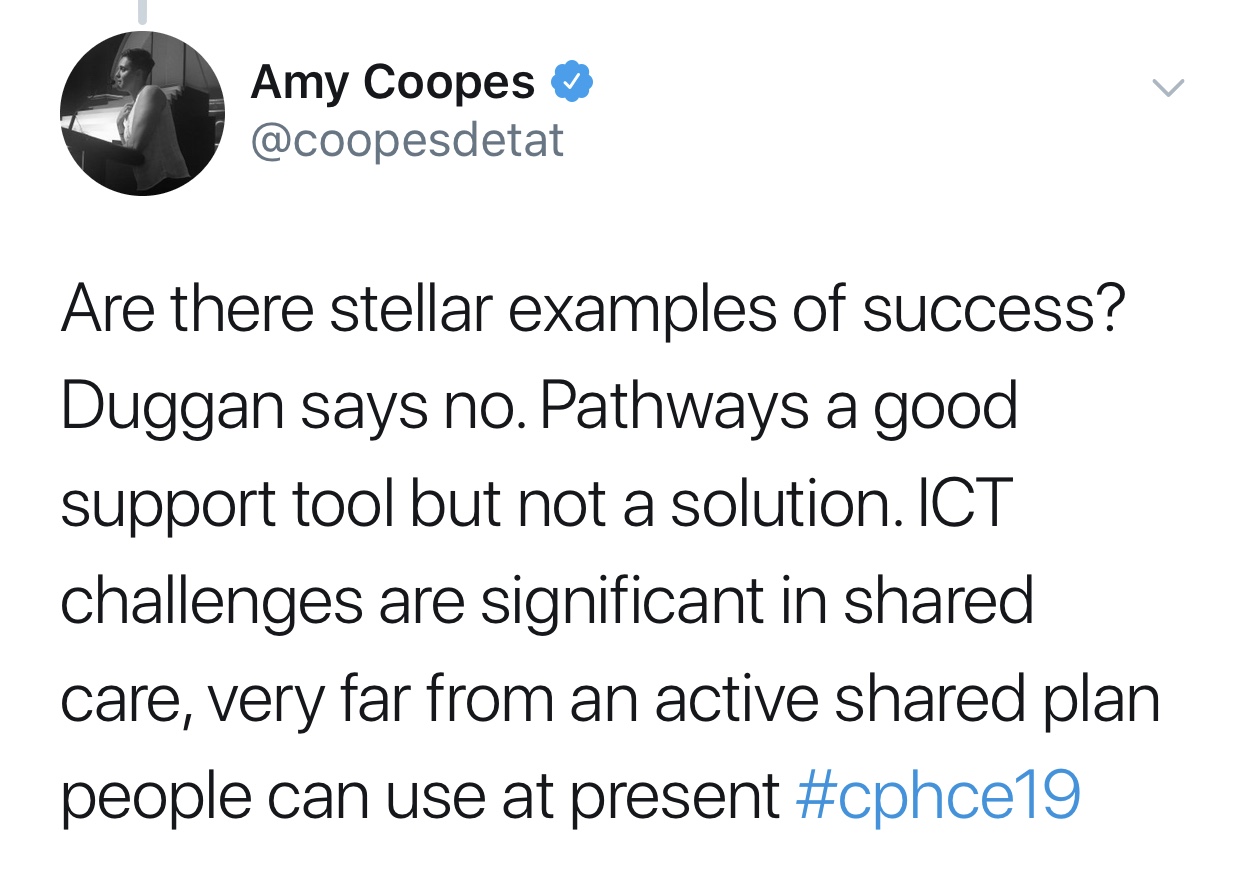 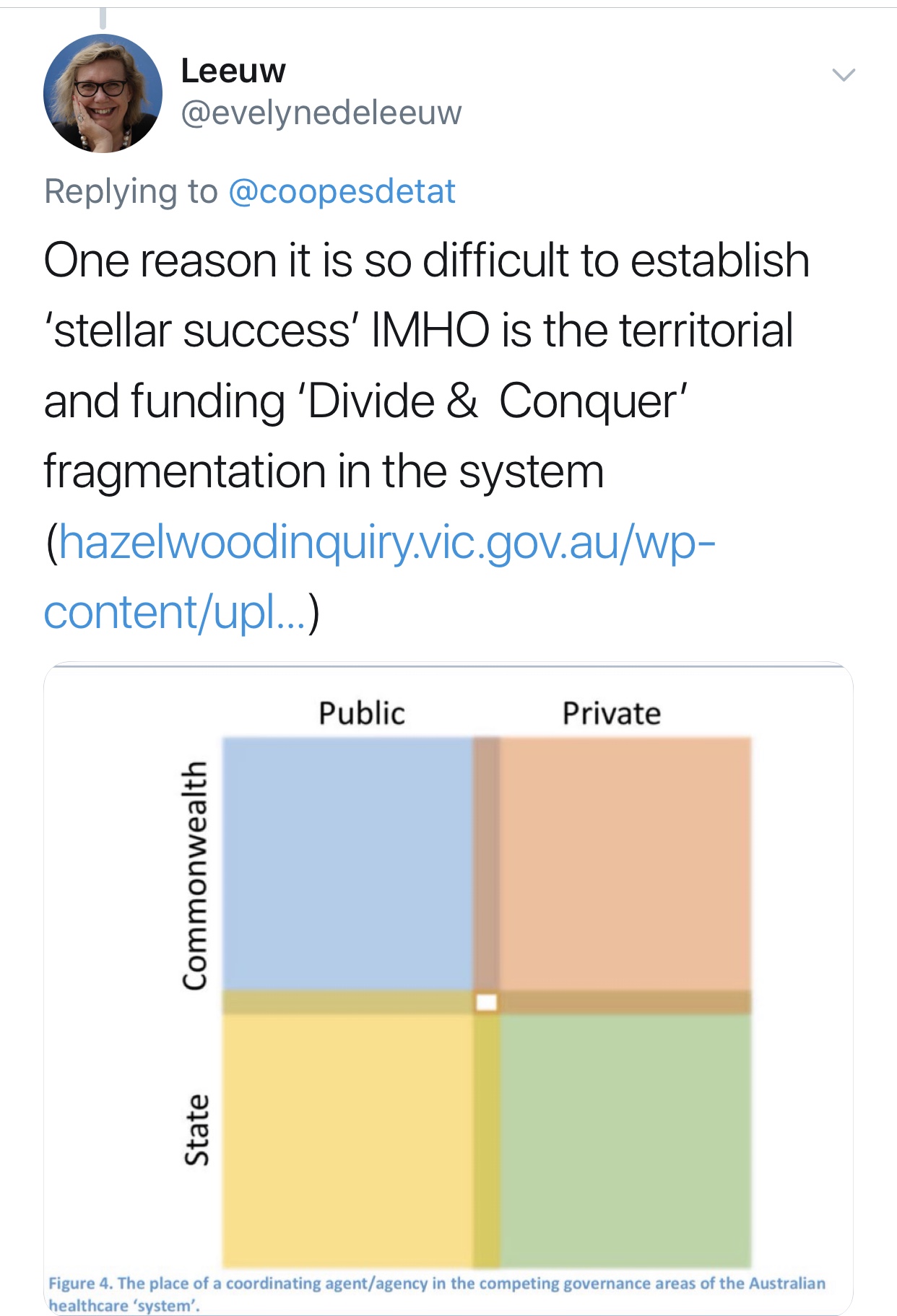 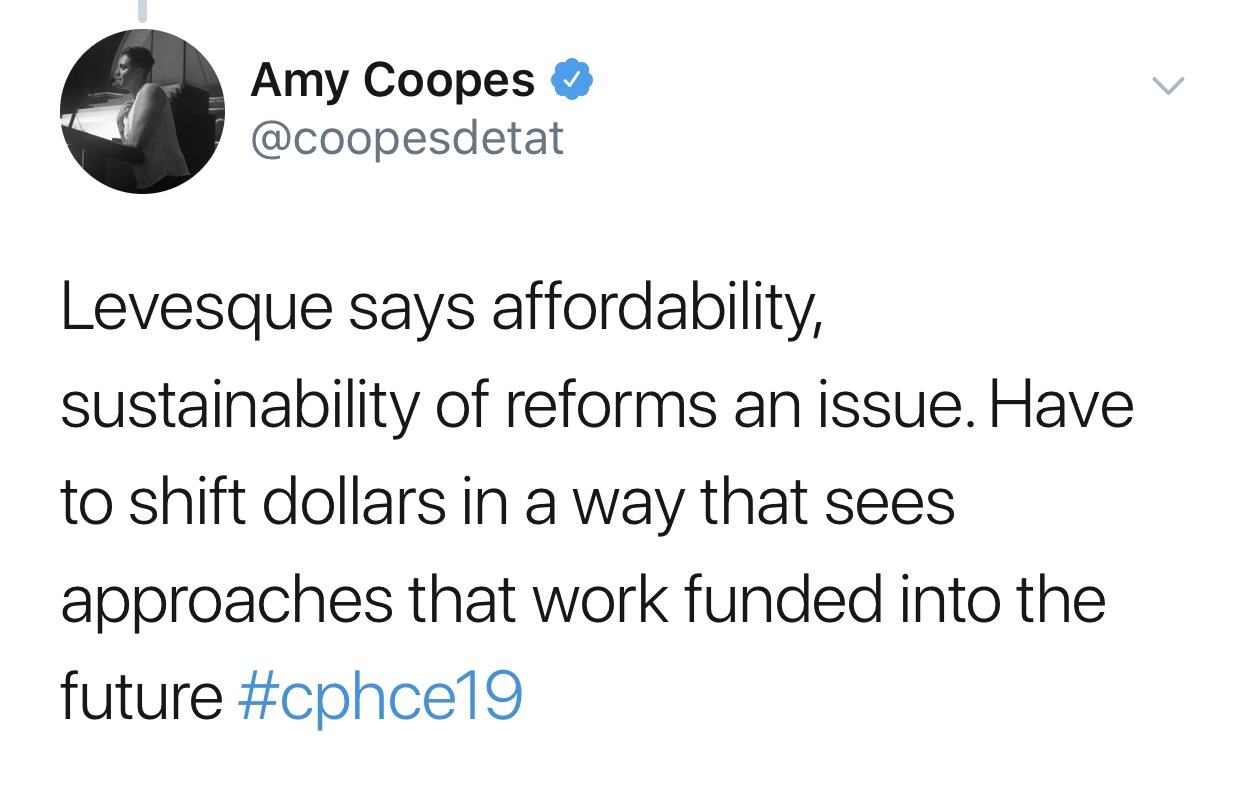 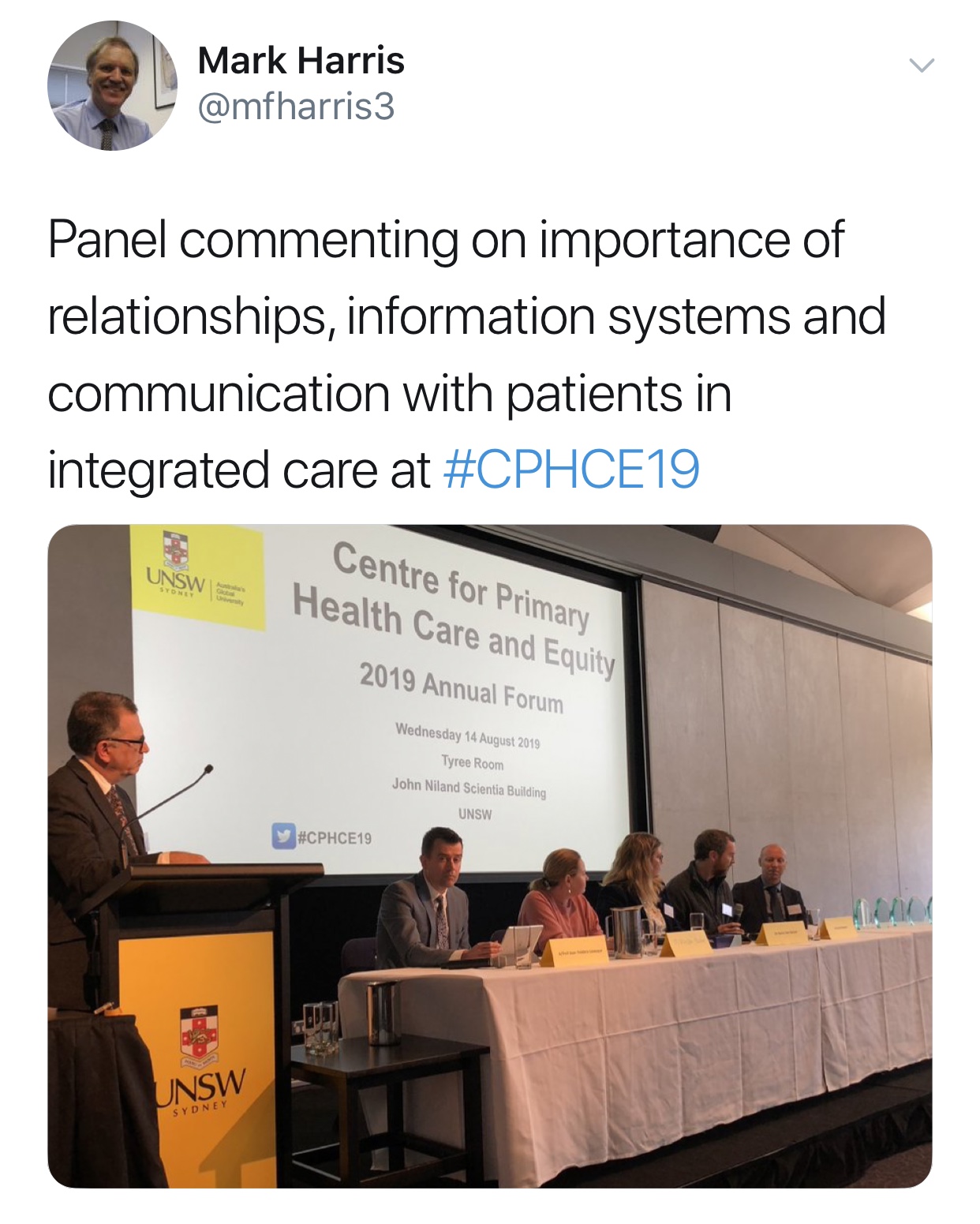 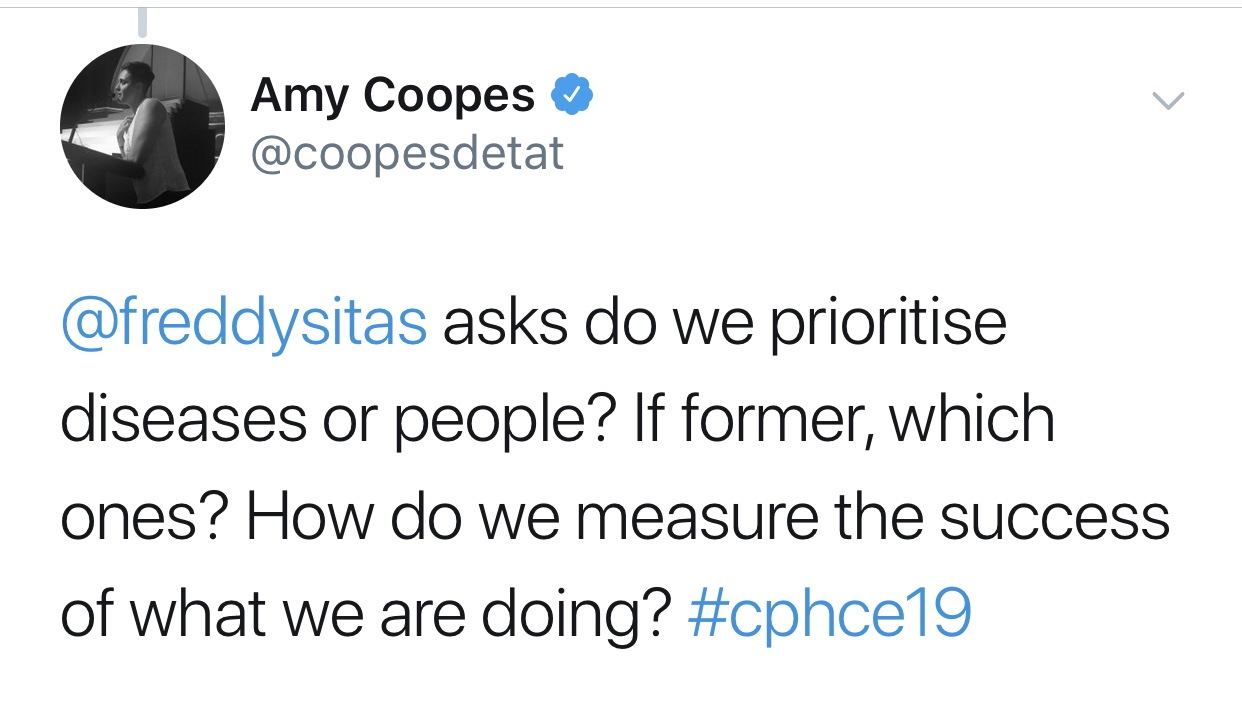 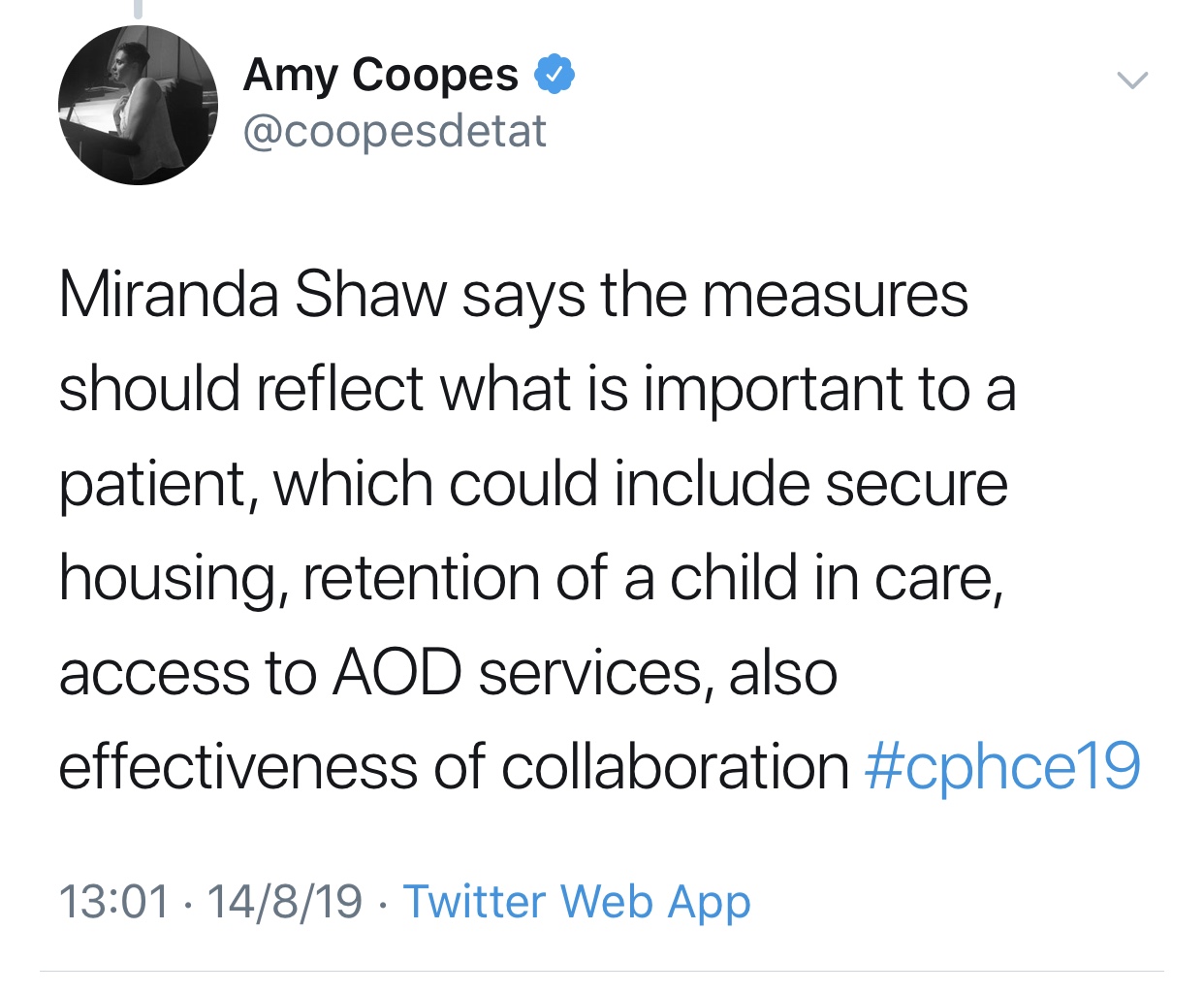 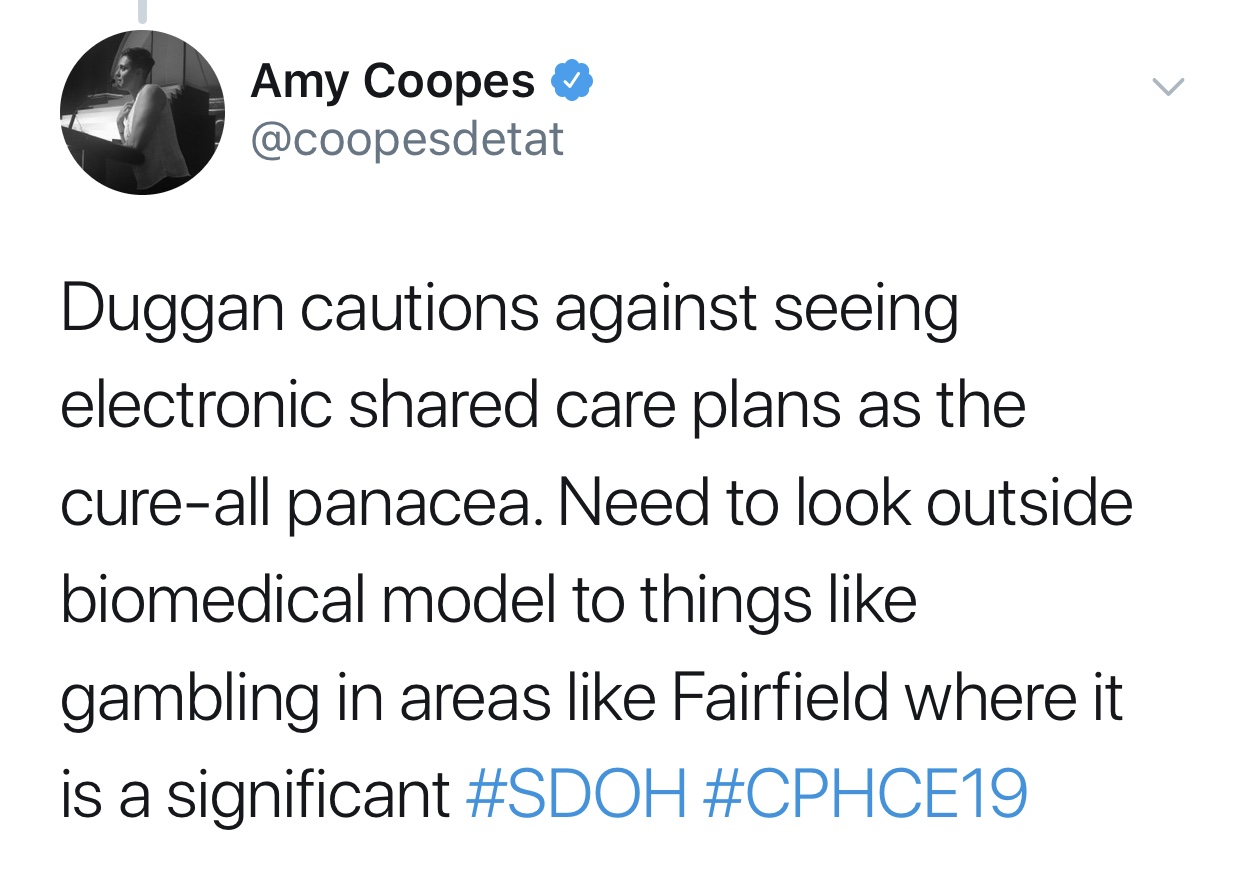 You can watch all our #CPHCE19 interviews at this playlist.

Bookmark this link for all our #CPHCE19 coverage.

As of 22 August, the video interviews from the day were viewed 549 times via the Periscope app. 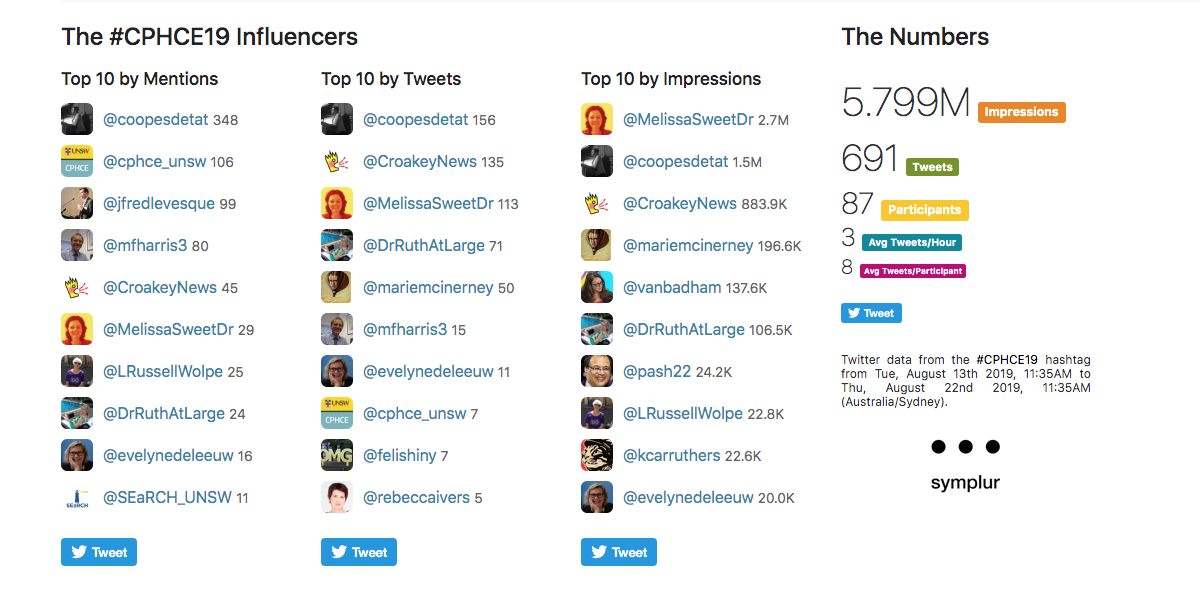 PrevPreviousOne planet, one health
NextWorld Humanitarian Day: a reflection on the inextricable link between public health and human rightsNext