Increasing the number and diversity of inter-sectoral partnerships (academic, policy and practice) to build further research capacity and generate evidence-informed policy and practice was a goal and over-arching theme of last week’s National Research Conference on Violence against Women and Children hosted by Australia’s National Research Organisation for Women’s Safety (ANROWS).

In her final #ANROWS2016 report for the Croakey Conference News Service, journalist and researcher Annie Blatchford reports below on efforts to bring sectors together – notably child protection with family violence and and family law services, and alcohol and sexual assault services.

She also profiles research into engaging men and boys in violence against women primary prevention which  looks beyond attitude change to behaviour change.

See more Twitter responses at the bottom of the post, and a final conference wrap to come.

Interagency between child protection, domestic violence services and the law 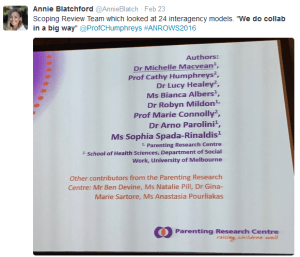 University of Melbourne Professor of Social Work Cathy Humphreys nodded to a presentation slide citing a “gaggle” of researchers involved in the PATRICIA project, and said: “We do collaboration in a big way.”

Humphreys said the best way to illustrate why collaboration between these three systems is so important was through a story she had recently been told.

A family violence service worker was involved in a case where the perpetrator allowed the mother of his children to return home only if she lived in a bathroom and was without a mobile phone.

On the Family Violence Risk Assessment and Management report (also known as an L17 form) the police recorded that returning home was a potentially “high risk” situation – even though they did not know about the perpetrator’s conditions – but they viewed the woman also as problematic.

The worker went to child protection services to explain what was happening, only to learn that they also agreed that the woman was problematic because she kept leaving the children.

It was not until the worker began talking with the perpetrator, and challenging his responses – something the police or child protection had not done – that the truth about violence began to come out , and which explained why the woman was constantly leaving the home and her children.

Had the worker, child protection and police gone onto work in isolation – the woman’s situation may have never been known to anyone but herself and her family.

Humphreys and the PATRICIA research team’s work involved an analysis of 24 Australian and international models of interagency work, the most common of which were colocation of workers, new governance arrangements and agreed criteria for assessment and risk management.

The project’s literature review, however, revealed there is little evidence around the effectiveness of interagency work between child protection, domestic and family violence services and the family law.

The team recommended a stronger knowledge base including more evaluation of interagency models and that services thoroughly consider how infrastructure, such as management and operations, might support interagency collaboration.

Listen also to Humphreys on Radio National’s Life Matters program on Family violence: helping the kids and watch this Periscope interview with her ahead of her presentation at the conference.

Building a bridge between the alcohol and sexual assault sectors

Evidence has shown a consistent connection between child sexual victimisation and substance abuse. The ANROWS funded project – “Establishing the connection” [between alcohol and other drug use and sexual victimisation] – presented by Mary Stathopoulos, Senior Research Officer at the Australian Institute of Family Studies called for better coordination between the two sectors to help serve clients experiencing both these issues.

Stathopoulos said little was known about how practitioners from sexual assault and alcohol or drug sectors were building a bridge between services in order to support shared learning and referrals. Through the research, however, which included a literature review, interviews with service providers and an online survey, the readiness for collaboration was clear.

“There is value in working together. I think we have to stop thinking of ourselves as separate… ‘cause we’re not. We’re dealing with the same people.” 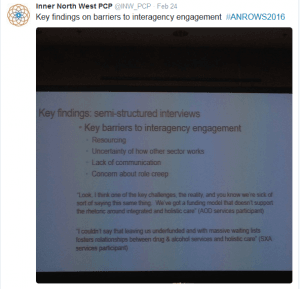 What can prevent that from happening includes lack of resourcing, uncertainty about how the other sector works, lack of communication and fear of stepping on the other person’s toes – also referred to as “role-creep”.

As a result of the project, a set of shared practiced guidelines have been developed and are due to be released later this month.

The guide includes information about the connection between sexual abuse and substance use, how to respond to disclosures, referrals and secondary consultations and other resources.

Buy-in from men and boys to prevent violence against women 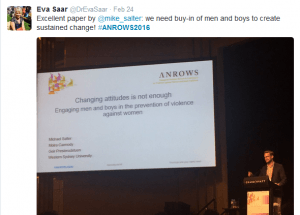 Western Sydney University Lecturer in Criminology Dr Michael Salter presented research – Less to lose and more to gain? Men and boys violence prevention research project – on the role of men and boys in primary prevention of violence against women, which revealed programs work best when they engage at a community or organisational level.

In an interview with Croakey, Salter said:

“Some agencies and literature assumes that if we engage men and boys, we have prevented violence against women. But primary prevention is much bigger then getting men’s bums on seats.”

The National Rugby League’s Respectful Relationship Sex & Ethics program was one of the interventions studied in Salter’s work, and showed a number of effective measures that can create actual behavioural and attitudinal change.

The program was embedded in a broader health promotion agenda looking at the wellbeing of men and boys more broadly and also supported men who took an interest to train up and drive the agenda forward, he said. Salter said:

“The key element is that once an organisation or community is invested in an intervention they are they ones that will implement it, and it has a much bigger buy-in than an agency coming in briefly, contracted to tell people what to do and then they leave. That is not what we are looking for.”

Another program that was reviewed by the study was the Strong Aboriginal Men program (SAM) delivered in 23 Aboriginal communities across New South Wales by the NSW Health Education Centre Against Violence (alongside ECAV’s Strong Aboriginal Women program). This study revealed culturally effective approaches that are emerging as best practice in this field, including the use of community and self-mobilisation.

SAM involved building a skilled Aboriginal male educator team, who run participatory workshops with men to help them understand the impact of family violence on their lives, and are concluded with sessions of brainstorming about how they can go on to lead and contribute to community efforts to prevent violence and abuse.

Salter said the men who complete the workshops are also able to elect to go onto participate in further training (the ECAV’s Aboriginal Qualification Pathway (which includes University level)) – both parts of the program need more funding.

“The possibility that the initial primary prevention can then actually develop a new Aboriginal prevention workforce, for us that was just really outstanding,” he said. 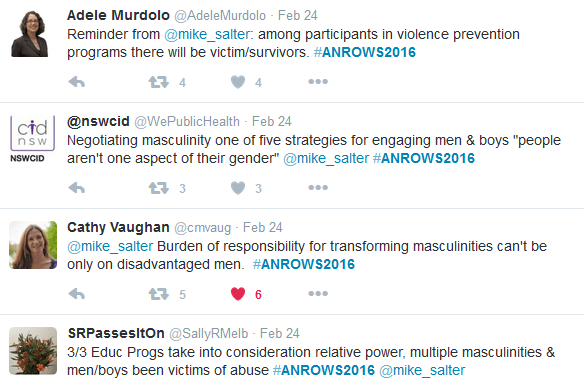 PrevPreviousTurn back from cruelty and indifference: Melissa Parke’s speech to Parliament
NextGrattan Institute and Medibank Private: can an affiliation be free of influence?Next