The opening session of the 20th International AIDS Conference in Melbourne last night paid a powerful, emotional tribute to colleagues who died on flight MH 17.

The importance of tackling discrimination and stigma was also a strong theme.

Sharing peoples’ stories is a powerful way of helping to counter discrimination and stigma, according to these reports below by Marie McInerney from the 2014 International Indigenous Pre-Conference on HIV and AIDS, which concluded in Sydney on July 19.

“I thought I might have to sacrifice my culture just to be happy in my body, but that’s not the case.”

Kai Clancy (left, above) felt for years that he was “a boy trapped in a girl’s body”.

What he feared about undergoing transgender therapy at the age of 18 was that there was no-one else like him in the Aboriginal and Torres Strait Islander community and that he would have to make a choice between his gender and his culture.

“Culture means the most to me, a lot of Aboriginal people feel the same way,” he said. “Acceptance in my own community is vital.”

Now, with the support of his family, community and a growing network, his story is set to be a comfort and inspiration for other Brotherboys, Indigenous transgender or gender diverse people who, as he puts it, are “assigned female at birth but inside they have a boy spirit and they live through that boy spirit….Being a Brotherboy encompasses your gender identity as well as your cultural identity.”

Kai tells his story in a brilliant home-made video, Brotherboys Yarnin’ Up, filmed with fellow Brotherboy Dean (above, right) which was previewed this weekend at a  “yarning circle” at the International Indigenous Pre-Conference on HIV and AIDS in Sydney.

Their big message is that it’s possible to remain deeply embedded in Indigenous culture as transgender people.

“I didn’t’ know there were other Brotherboys out there in the community,” Kai said. “That made me a bit worried about my transition. I was diving into the deep end, thought I might have to sacrifice my culture just to be happy in my body, but that’s not the case,” he says.

His fears were allayed when he found the Sistergirls Brotherboys support group on Facebook. His message to other young people like him is:

“Be proud of your culture, don’t be ashamed, it’s okay to be who you really are, stay deadly….We just have to educate people that this is us, this is who we are.”

In the video, both Brotherboys talk about their transition journeys (Kai’s began only this year) and about the support they have been given in their own communities.

“The Elders were good, they were really understanding of my transition,” Kai says. “The message I try to get across is I’m a boy trapped inside a girl’s body, as simple as that.”

Dean, who was 42 and married with four children when he transitioned eight years ago, has had similar support.

“They don’t say much but they know. They told me in so many ways that they accepted what was happening for me and they wanted to be part of it. It’s been really, really good. I’m learning lots from the Elders in my community and it’s just been wonderful how they’ve embraced me.”

His family too has been “100 per cent for me,” he says. “They love me dearly, they support me fully, they’ve been my rock, and that’s been very important.”

That support was clear in the presence at the session of one of Dean’s sons, who said he had seen his father struggle more in the early days of transition in a non-Indigenous network. “You need that link to culture,” he said.

His father’s transition had been, he said, “personally no challenge for me. I just want to be the best son I can be for Dad.”

Sadly, not everyone is guaranteed that support, in or out of family and community.

Brotherboys and Sistergirls face racism and discrimination in both non-Indigenous and Indigenous communities that puts them at high risk of violence, sexual abuse, and physical and mental health issues, including higher rates of HIV and AIDS.

Other participants in the session sobbed as they described their isolation and alienation. One told how her grandparents had been punished for her “sins”, others described being rejected by family and community, removed from culture and country, which also puts them at risk.

Lisa O’Brien, Sistergirl and Brotherboy representative on the Anwernekenhe National HIV Alliance (ANA) who organised the conference session, said Kai and Dean are the first Brotherboys she has known to go so public with their stories.

Just as important as their speaking out at the session, she said, was the presence of Elders – invited to the conference to help reduce stigma and discrimination around HIV and AIDS in Indigenous communities. “To have them there and to hear them say ‘we accept you’ was so important,” she said.

“It’s just been amazing, seeing the Brotherboys have a voice for the first time.” 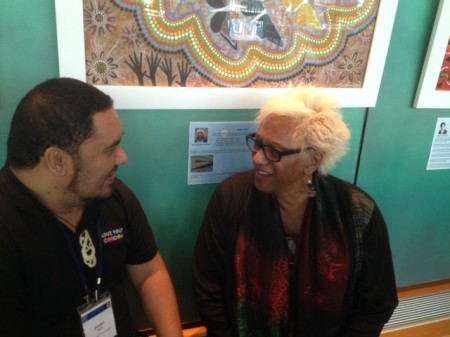 The importance of cultural support and the role of Elders was also paramount for Maori health worker Manawaroa Vonnie Te Wao Anderson, who said it is time to “use our Indigenous values” to address stigma and discrimination for LGBTI people.

A health promoter from INA, the Maori, Indigenous and South Pacific HIV/AIDS Foundation (pictured right, with colleague and fellow speaker Jordon Harris), she told the conference about growing up in New Zealand in the 1950s, born a boy but feeling she was a girl “as far back as I can remember”, and trying to live a life as a woman.

“Back then, it wasn’t easy to get a job if you were living as a woman in a man’s body, especially if you got ‘sprung’. You lost your job, you could lose your flat, doctors and nurses could be cruel. The police treated you like you were a criminal.”

In the late 1970s, she moved to Australia to get away from the stigma and discrimination and to ‘come out’ as a woman. Ten years later, she returned to New Zealand and, one day, went to a large meeting in her home community being run by “a group of esteemed tribal elders”.

They were, she said, talking about the traditional roles of men and women. With her heart pounding, she asked: ‘What about the role of transsexual people like me?”

The elder asked her to explain the word ‘transsexual’.

“After hearing my explanation he replied in the Maori language. He said if I wanted to wear a dress, then I was a woman! He gave me permission to take up the roles and practices of women in my home community. There was no hint of stigma or discrimination in his reply. I was amazed, as was everyone else at the meeting!

“Today I am a Maori woman, a mother, a grandmother, an auntie, a sister, and a respected member of our tribe. I raised my daughter and now I am raising my grandchild. I oversee and manage the large communal kitchen at our community meeting place. I am a weaver and, as you would expect, I carry out traditional roles undertaken by women of our tribes.”

There were, she said, two points she wanted to make:

“The first is that the world divides people up into straight, gay, lesbian, bisexual, transgender, intersex and so on. Unfortunately, some of us Indigenous people are doing the same thing….I think that’s a shame. In New Zealand, there is a Maori word ‘takataapui’. (It) does not mean gay or lesbian or trans or men who have sex with men. Instead the word is inclusive of all of us, and I think that is powerful.

The second point is we need to do more to reduce trans stigma and discrimination.

By comparison, my home community accepted me as a Maori woman and helped me to be a mother. There was no need for me to be involved in sex work. Instead, I was supported to raise my family. I think we should use our Indigenous values to support safer, healthier communities for Indigenous trans people, now and in the future.”