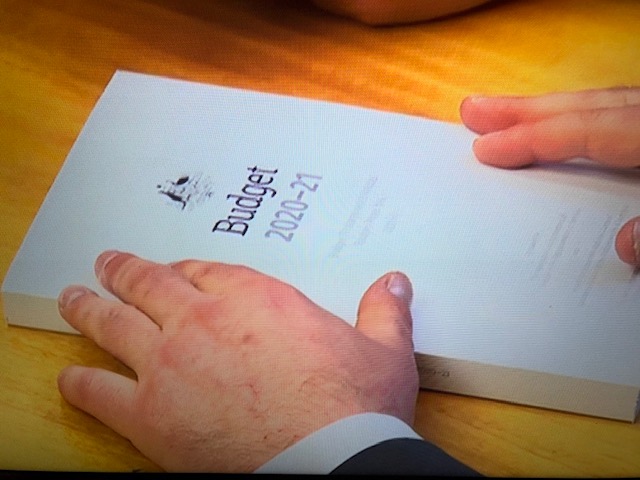 Budget 2020 and mental health: what is the strategy?

Introduction by Croakey: Delivering an unprecedented budget for unprecedented times on Tuesday night, Treasurer Josh Frydenberg acknowledged the significant impact the novel coronavirus pandemic and associated downturn was having on the mental health of millions of Australians.

Commending his COVID-19 recovery budget to the House, Frydenberg said mental health and suicide prevention was a priority for the government’s path back from the pandemic, announcing $5.7 billion in funding.

“My heart goes out to all those Australians – young and old – for whom COVID-19 has caused such pain,” said Frydenberg.

“My message tonight is that this House stands with you. You are not alone.”

The headline announcement was a doubling in Medicare-subsidised counselling sessions, as well as funding for existing blue-ribbon branded operations in the mental health space.

But mental health groups said the funding was simply papering over the cracks, with the government still sitting on the Productivity Commission’s report into mental health and eschewing a glaring need for system reform.

It is unfortunate on Budget night that we still haven’t seen the long-awaited final report of the Productivity Commission Inquiry into Mental Health which went to the government in June – without the blueprint for comprehensive mental health sector reform it is difficult to move beyond short-term and discrete injections of funding.”

Allan said “novel and bold” solutions were needed to help Australia emerge from the COVID-19 pandemic, with fundamental reform of funding arrangements and workforce distribution.

Frydenberg promised in his budget address that the Productivity Commission report and an interim report into suicide prevention commissioned by Prime Minister Scott Morrison would be released in “coming weeks”.

In this piece for Croakey, Sebastian Rosenberg takes a closer look at COVID-19, mental health and promises in the 2020-21 budget.

There was one announcement of new mental health funding included in the 2020-21 Federal Budget – the doubling of Medicare-subsidised mental health sessions from 10 to 20 per annum.

As a demand-driven program, it is difficult to estimate the cost of this measure but the Budget set aside just over $100 million in funding over the forward estimates.

Our capacity to properly assess overall mental health spending is nobbled for a few reasons.

First, it has become an unfortunate reality that governments and bureaucracies make it increasingly difficult to ‘follow the money’.  Announcements fuse with re-announcements. One is labelled as building on others, without clear demarcation.

This confected confusion relies on tools like Parliamentary Questions on Notice to unravel, and even then, with mixed results as answers can be tailored to further obscure rather than reveal.

More obviously, while the Prime Minister has asserted annual Federal mental health spending will reach $5.7 billion in 2020-21, the most recent year we have confirmed spending figures for was 2017-18, when $3.3 billion was spent by the Federal Government on mental health.

These data issues and lags have a material impact on the ability of the community to understand how governments are really dealing with mental health, diminishing transparency and accountability. Bragging about how much we are spending this year seems inappropriate when last year’s spending (and the year before) is not visible.

Lastly, but perhaps of primary importance, the lack of systems of monitoring and quality means we cannot assess the actual impact of mental health spending on the quality of people’s lives, regardless of the level.

There is nothing in this Budget to address this fundamental failing.

I have written extensively about my misgivings around the Better Access Program.

It was initially designed to provide short-term interventions for people with mild to moderate disorders. Even within this context there is little if any evidence it has fundamentally improved the mental health of Australians.

Between January 2007 and December 2019, the Program has delivered 53 million sessions of psychology care at a cost of around $5.3 billion, but we know almost nothing about the result of this investment.

These statistics suggests the acuity of clients could be dropping, and that rather than provide better access to more people, the Program is just providing better access to the same clients, year after year.

It is also the case that only about half all the mental health plans written are reviewed by GPs.  This is significant given Minister Hunt has clarified that such a review should occur after the first 10 sessions, before accessing the second 10.

At the same time, I am conscious some psychologists assert they are treating people with significant and severe mental health problems, and of course many consumers are desperate for more care.

This suggests some fundamental design problems – that the Program is treating a client group for which it was never intended, that it provides incentives for ineffective repeat care, and that it operates without effective accountability or monitoring of client progress.

I have no doubt many people may be helped by these new sessions, but these problems are real.  Lifting the limit to 20 will perpetuate, not solve them.

While the change to the Better Access Program was the only new Budget announcement, there have of course been myriad funding initiatives announced over recent months.  These have been rather piecemeal, despite the hasty construction of a Pandemic Response Plan which in itself contained $48m worth of funding.

Through bushfires and then COVID, funding has been scattered across helplines, suicide prevention and mental health programs and organisations.

While meeting the urgent requirements arising from COVID was a clear priority, the key ingredient missing in all this activity is strategy.

The National Mental Health Commission is working on Vision 2030 (rapidly approaching).  The Suicide Prevention Taskforce is working on a report as is the Victorian Royal Commission.  The Productivity Commission report will be released in ‘coming weeks’.

However, as Minister Hunt confirmed, this will herald a further process of public consultation rather than definitive actions.

So, Budget 2020, the most vital economic document for a generation as we build out from under the pandemic, essentially postponed the task of mental health reform, barring increased investment in a Program of limited, perhaps suspect value.

Seventy-five percent of all mental illness manifests before the age of 25.  Choosing to invest in youth employment is a most welcome element of the Budget and underscores the role good mental health can play in ensuring the long-term capacity of people to complete their study, find and keep a job and become contributing citizens.

This Budget missed an opportunity to develop a strategy to build the mental wealth of the nation as a key part of post-COVID recovery.  Once again, and at a time of real crisis, this Budget declared that mental health could wait a bit longer.

Sebastian Rosenberg is a Fellow at the Centre for Mental Health Research, Australian National University, and Senior Lecturer, Brain and Mind Centre, University of Sydney