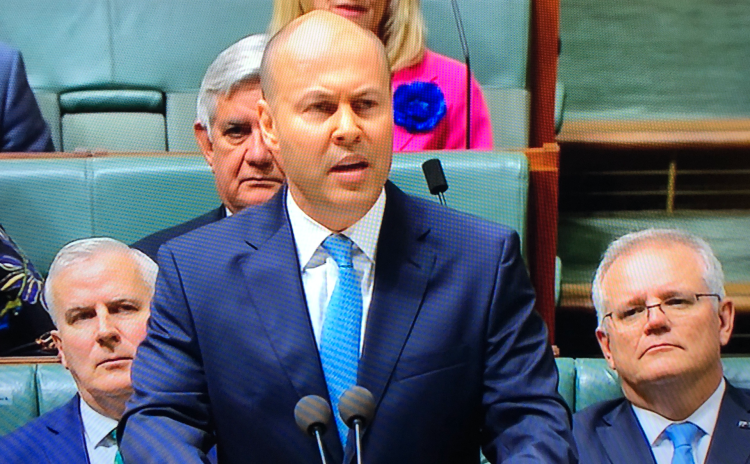 The Treasurer brings down the 2021-22 Federal Budget Image: ABC

This post wraps reaction to the Federal Budget on foreign aid, refugees, asylum seekers and migrants from experts and stakeholder groups, including the Refugee Council of Australia, Oxfam, AMES Australia, the Australian Global Health Alliance and Pacific Friends of Global Health. It also includes reaction via Twitter.

The Refugee Council of Australia

Paul Power, CEO of the Refugee Council of Australia (RCA), criticised the Government’s focus on immigration detention rather than refugees.

The Morrison Government will spend $464.7 million over two years to increase the capacity of its immigration detention centres and to extend the life of the Christmas Island detention centre.

Power said the Refugee and Humanitarian Program has decreased from 18,750 places a year to a ceiling of 13,750 places.

Australia’s cut to refugee resettlement comes at a time when the situation of the world’s 26 million refugees is becoming even more desperate as economic conditions decline in many host countries because of the COVID-19 pandemic.

Refugee and humanitarian visas are still being issued, but at a rate well below the ceiling of Australia’s reduced program.”

Power also commented on the RAC’s disappointment that the government did not announce changes to Australia’s refugee sponsorship recommended in the review of the Community Support Program.

Given the Immigration Minister’s comments on Monday that he is a “strong supporter” of community sponsorship, we had hoped that such reforms would be introduced in the budget. We look forward to the possibility of a positive announcement soon.”

However, the RAC welcomed some of the Budget announcements, including:

Commenting on the Budget’s impact on aid, Oxfam Australia Chief Executive Lyn Morgain said: “Treasurer Josh Frydenberg said this budget is about protecting Australians, but then failed to address the two biggest threats to our community: the global pandemic and climate change.”

She also highlighted the growing humanitarian crisis in the Asia-Pacific region:

Asia is now home to the largest number of COVID-19 cases in the world, and recent outbreaks in Papua New Guinea, Timor Leste and Fiji highlight risks in the Pacific – and for us – as numbers continue to grow at an alarming rate.

Oxfam is calling on the Australian Government to boost, rather than reduce, support for our Asa-Pacific region.”

Morgain welcomed the further contributions to the rollout of COVID-19 vaccines and other pandemic support for neighbouring countries but said that the Budget stops well short of what is required to address the escalating crisis.

In particular she called on the government to increase its investment in the COVAX facility and commit to a target of $500 million in humanitarian funding by 2022-23. 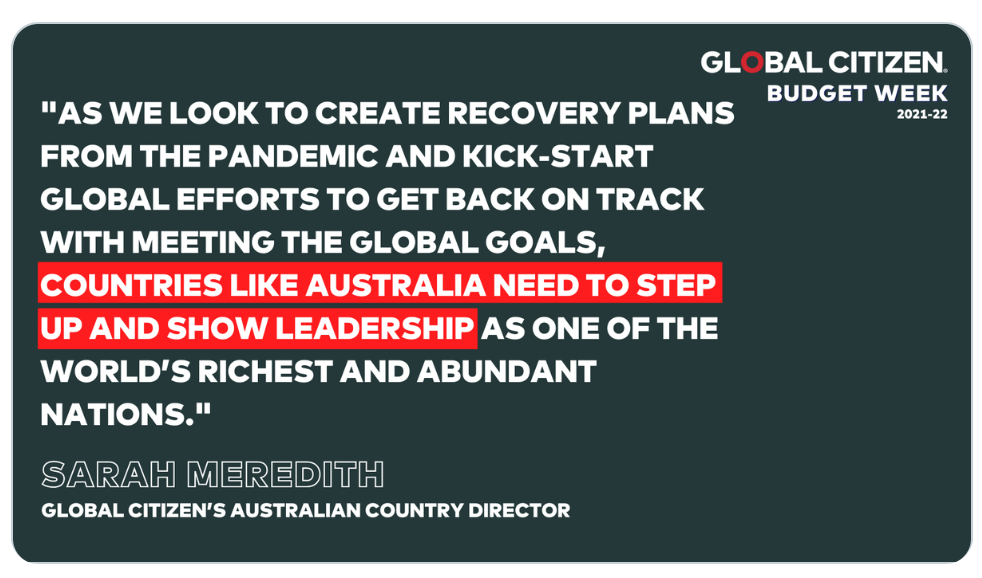 However, the organisation stressed that access and information about these opportunities must be available to vulnerable groups in society, including migrants, refugee and members of culturally and linguistically diverse (CALD) communities.

Too often we see some groups left behind when these opportunities are rolled out.

We know from experience that migrants and refugees and people from CALD communities find it difficult to understand what opportunities are available to them and to access those opportunities.”

Scarth also highlighted the role of migration as a key driver of our economic prosperity and called on the government to reignite migration programs when the COVID-19 pandemic allows.

AMES did however welcome the extra resources in the budget to support CALD women and victims of family violence and other measures  aimed at supporting multicultural communities.

The extra money to continue the delivery of critical services for culturally diverse communities through to 30 June 2022 when the current national plan comes to an end is very welcome; as is the $25.9 million over four years for measures to support women affected by family, domestic and sexual violence.

We also welcome the $16.9 million to fund mental health early intervention supports and preventive measures for migrants and multicultural communities, and address the cultural competence of the broader health workforce through the Program of Assistance for Survivors of Torture and Trauma, and Mental Health Australia for their Embrace Framework.”

Director of the Lowy Institute’s Pacific Islands Program, Jonathan Pryke, criticised the Government’s failure to increase foreign aid, saying that the budget showed “Australia at its least generous ever”.

In an environment where fiscal rules are being radically rewritten, the Australian economy is in much better shape than expected, and the prospect of a developing world that will most certainly be in for a worse 2021–22, it is disappointing the government couldn’t find more money to commit.”

He argued that Australian aid currently is the least generous at any point in its history and compared unfavourably with other OECD nations.

As the 10th richest country in the world, Australia now ranks 21 of 29 in the Organisation for Economic Cooperation and Development – a club of wealthy countries – when measuring aid as a proportion of gross national income.

Only two “traditional” donors (Portugal and the United States) come in behind us.”

Pryke described the “losing battle” to convince both the Australian political class and the Australian people just how important aid is in protecting national interests and described polling which shows low levels of public support for foreign aid.

Whatever the reason, the 2021–22 budget is yet another sad reflection on Australia as a nation and its willingness to look the other way while the developing world experiences a crisis unlike any ever seen. Australia can, and should, do better.”

He argued that the budget failed all three tests with aid spending falling next year and through the forward estimates to 2024-25.

He also criticised the Department of Foreign Affairs and Trade (DFAT) for not providing an estimate of the total aid spend which he said undermined its credibility as an aid manager.

However, Howes did find some small amounts of good news in the budget, including faster vaccine expenditure and some modest support for India.

In looking to the future, Howes argues that Australia will come under pressure, both from the G7 and regionally, to do more as it is not feasible for us to be one of the OECD’s most successful economies, and, in the midst of a global pandemic, remain one of its stingiest donors.

In October 2020, Australia pledged with the G20 to ‘spare no effort’ to ensure equitable access to COVID-19 vaccines, treatments and diagnostics. This is not that. As one of the wealthiest countries in the world, it is appalling that Australia is failing to contribute its fair share.

This is not us. As Australians, we do whatever we can to support our neighbours. You don’t have to look far beyond our borders to understand just how lucky we are to have fared so well throughout this pandemic.

We are thus in a position to contribute much more to the global community, and a crisis of this scale requires an exceptional response. We urge the government to make further contributions immediately to support the international COVID-19 response and recovery.”

Professor Brendan Crabb AC, Chair of Pacific Friends of Global Health agreed that this was not the Budget announcement that the organisations were hoping for.

Last year, we were proud of the way Australia stepped up to help our neighbours, with its initial contributions to COVAX, and the COVID-19 support and vaccine packages for the region.

But the pandemic is so far from over. In fact, it is the worst it’s been, so I can’t fathom why the Government would fail to build upon its initial response when the need is greater than ever.

When our neighbours are vulnerable, so are we.

A strong, financial investment from Australia is strategic as much as it is simply the right thing to do.

It is vital to protect the health, stability and security of the Indo-Pacific and necessary to speed up an end to the pandemic. This isn’t over for anyone until it’s over for everyone.”

Writing in The Conversation, Claire Higgins, Senior Research Fellow, Kaldor Centre for International Refugee Law at UNSW, described the budget as a missed opportunity for refugees and for the nation’s post-pandemic future.

She said that refugees and asylum seekers will take little comfort from the budget given that resettlement places remain capped, while spending on offshore processing, immigration detention and deterrence measures remains high.

Higgins argued that with our borders shut, this is the ideal time to overhaul our asylum seeker policies and to look at how Australia can do more in response to global displacement — particularly with the pressures COVID has placed on countries hosting large numbers of forced migrants.

She criticised the government’s spending on offshore processing arguing that keeping people in Nauru and PNG cannot be the only option, particularly given that the UN refugee agency has said that Australia must “live up to its responsibilities” to find long-term and humane solutions for those held offshore.

Higgins described studies which repeatedly showed that the settlement of displaced people can help to address demographic and labour shortages and substantially boost Australia’s economy and said that the budget’s emphasis on detention, deterrence and removal is disappointing.

However, she also noted some positives in the budget including the focus on improving women’s safety.

“Alongside economic and social support initiatives for refugee and migrant women, there is a pilot program to enable women on temporary visas who are experiencing family violence to explore visa options not reliant on their partner.”

PrevPreviousJoin us for a CroakeyLIVE: on the Federal Budget and health equity
Next“COVID-19 should be the last pandemic”: call to action from expert panel and public health leadersNext