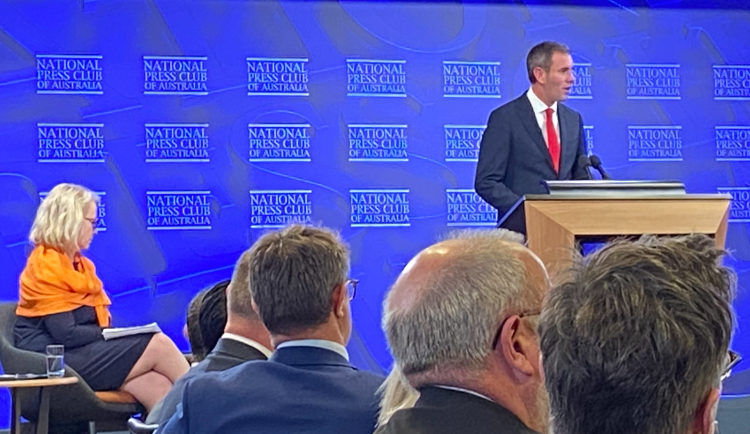 Budget Reply: setting the tone for a policy-lite election campaign

This week, Albanese’s frontbench colleagues have been out selling Labor’s response, including Jason Clare, Shadow Minister for Housing and Homelessness, who has carriage of the Opposition’s centrepiece housing package.

Today at the National Press Club in Canberra, it was Shadow Treasurer Jim Chalmers who faced journalists from the Press Gallery quizzing him about how Labor will manage to both address the gaps in the Government’s Budget package while also minimising the impact on the predicted record deficit.

In what is being seen as the first major milestone in the race towards the next election, the response of the Australian community to both the Budget and Budget Reply will be critical in shaping the political parties’ election platforms.

The key features of the Labor Budget Reply and responses from stakeholders are summarised below by Croakey Editor, Jennifer Doggett.

After being burned by its expansive policy agenda last election, Labor has clearly decided on a more cautious approach and there were few major policy announcements in the Budget Reply.

Most of Labor’s focus has been on criticising the Government for failures in quarantine and the COVID-19 vaccine rollout, as well as questioning its ability to implement major spending programs in aged care and mental health.

In his speech at the National Press Club today, Shadow Treasurer Jim Chalmers argued that the problems with the vaccine rollout and quarantine strategies have undermined the Coalition’s credibility with the community.

“Australians have come to distrust this Government. There is a fundamental disconnect between what the Government announces and what it delivers,” he said.

Chalmers warned the electorate that a returned Coalition Government would seek to claw back the deficit in its first post-election Budget, a tactic that is likely to continue in the lead up to the next federal poll.

The Government’s $17 billion aged care package made it difficult for the Opposition to find traction in this traditionally Labor area.

The focus of the Budget Reply was not on an alternative aged care package but on highlighting the recommendations of the Royal Commission that were not adopted by the Government .

These include requirements that a nurse is on duty in nursing homes at all times and wage increases for aged care staff and fewer hours of care.

In contrast to the Government’s lack of specific outcomes for its aged care spending, Albanese committed a future Labor Government to a guaranteed minimum level of nurses, assistants and carers to ensure that additional aged care funding is used to deliver better care rather than aged care provider profits.

He also promised support for the Fair Work Commission to lift the wages of aged care workers flagged an increased focus on dementia care management in aged care.

The centrepiece of the Budget Reply was a $10 billion dollar Housing Australia Future Fund which would build around 4,000 homes a year, 20 percent of which would be reserved for victims of domestic violence, Aboriginal and Torres Strait Islander people, veterans and senior women.

You can’t fix this with one single thing, but one thing you have to do is build more housing. Build more affordable housing and build more social housing.

The Federal Government’s approach to this has been to turn a blind eye and just say that’s the job of state governments. That’s the wrong approach, that’s just false.”

Clare said that Labor’s policy aimed to build a total of 20,000 social housing properties around the country and 10,000 affordable housing properties. He said older women aged 65 to 74 are the fastest growing group of homeless Australians at the moment, and that the Labor policy is “fairly and squarely” targeted at helping them.

Clare described some of the housing in remote Indigenous communities as “some of the worst housing, not just in Australia, but in the world”, and committed $200 million to improve housing standards in Aboriginal and Torres Strait Islander communities.

Unsurprisingly, in his Budget Reply speech Albanese focussed on the Government’s weakness in Australia’s COVID response, in particular quarantine and the vaccine roll-out.

He described the government as “bungling” both responses and argued that Australia should have expanded existing quarantine facilities and constructed new purpose built ones across the country, located near medical and other needed support.

He also criticised the government for what he described as “one of the slowest rollouts in the world,” highlighting the contradictions between statements from the Prime Minister and the Treasurer on when Australians will be vaccinated.

This criticism was echoed by Assistant Treasurer Jim Chalmers at the National Press Club today who said that the Australian community was “worried about winning the war and losing the peace”.

Despite this criticism, Labor has not made any major policy commitments on COVID-19 responses, apart from for domestic production of mRNA vaccines through the proposed National Reconstruction Fund.

Labor took a stronger position than the Coalition on climate change, criticising the Prime Minister for being “literally stuck on mute in front of the world” and “frozen in time while the world warms”.

“The government has proven incapable of developing an energy policy or dealing with climate change. Positive action on climate change and moving to net zero emissions by 2050 will create jobs, lower energy prices and lower emissions,” Albanese said.

The Opposition Leader outlined Labor’s job-friendly approach to renewable energy, including funding for 10,000 new apprenticeship positions in the clean energy sector, in addition to a roll-out of community batteries and subsidies for electric vehicles.

“Labor has a plan to help families and communities play their part in achieving this critical target. A plan that will make electric cars more affordable and support the roll-out of community batteries.”

He also argued that positive action on climate change and moving to net zero emissions by 2050 will create jobs, lower energy prices and lower emissions.

A clear point of difference between the Government and Opposition is Labor’s support for the Uluru Statement from the Heart which Albanese described as a “clarion call for truth, treaty and a voice” and a “generous statement to advance reconciliation”.

Other important commitments from Labor include the establishment of a National Integrity Commission and a program to support innovative young entrepreneurs.

Stakeholders largely responded positively to Labor’s Budget Reply, in particular to the focus on housing and homelessness.

The Australian Healthcare and Hospitals Association (AHHA) welcomed Labor’s acknowledgment that problems in aged care won’t be solved if we don’t address workforce issues and supported a guaranteed minimum level of nurses, assistants and carers and increased wages for aged care workers.

Homelessness Australia said that Labor’s proposed housing fund would give low- and middle-income earners struggling to access stable housing the prospect of a home they can afford.

Homelessness Australia Chair Jenny Smith said that a Federal Government commitment to investment in social housing is the missing piece holding back gains in reducing homelessness and rising rental stress.

Smith welcomed the focus in the Budget Reply on crisis and transitional housing for women and children fleeing family violence, and veterans who need housing and support.

“Too often women and children fleeing family violence struggle to access appropriate accommodation and we know this makes them more likely to experience homelessness, or return to violent situations.

“Veterans are overrepresented in homelessness figures and we are pleased to see federal policy that recognises this, and would go a small way to repaying the debt we owe these servicemen and women,” Smith said.

The Thrive by Five campaign commended the Opposition for keeping its more ambitious early learning and childcare policy at the top of its reform agenda.

CEO Jay Weatherill called on the federal and state/territory leaders to bring together fragmented early childhood services across different areas of responsibility into a comprehensive, high quality and coordinated system.

“Now that all the political parties have acknowledged the need for change, we need collaboration on structural changes that will ensure no child is left behind in the most critical years of development and that all parents have the choice to work,” he said.

“We also welcome the allocation of funding to meet the housing needs of women and children fleeing domestic violence, and to repair, maintain and improve housing in indigenous remote communities,” she said.

Goldie said that while the fund won’t meet the full housing needs of people on low incomes and in housing crisis it would provide a sustainable funding base to give more people greater housing options.

In addition, ACOSS called for an increase in social security payments, including JobSeeker, to raise them above the poverty line.

See this Twitter thread by Croakey’s Dr Melissa Sweet reporting on the launch, where speakers described the need for service-based responses to people sleeping rough, rather than harmful policing responses.

Of the 27 participants interviewed, 10 gave examples of being strip searched in public, some on multiple occasions. Nine of the ten participants who reported being subjected to a strip search in a public space on more than one occasion identified as Aboriginal or Torres Strait Islander. 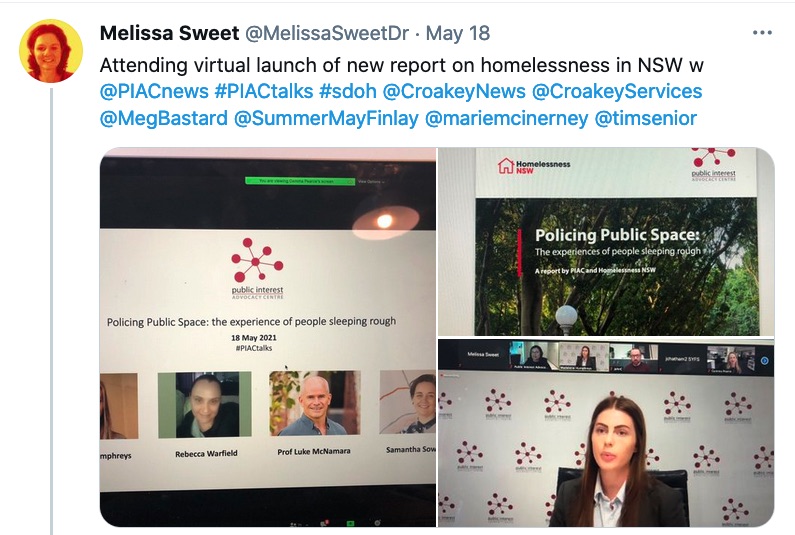