#Budget2014: Searching for the detail and evidence amidst the pain 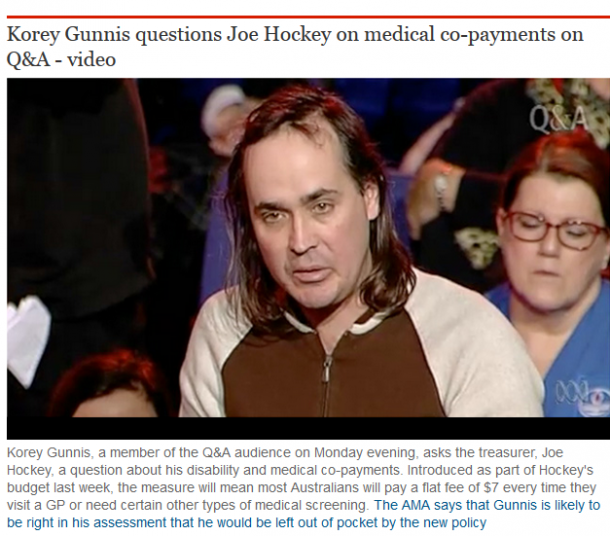 How was he supposed to cope on a Disability Support Pension with the new “heartless” system of medical co-payments, when he requires 12 separate medications per day, a hearing aid, regular GP and specialist visits, care at home, and regular scans and blood tests?

He wouldn’t have to, was the quick and clear answer from Hockey.

“Well from what you said you wouldn’t be hit by the so-called (sic) Medicare co-payment, you wouldn’t be affected, because you would be on a care plan with your doctor. Obviously, you’ve got a number of chronic diseases. In that situation, you are not affected by the co-payment.”

Well, that was a relief. Or was it?

It’s hard to say, because the Budget papers aren’t clear, nor are media releases issued by Health Minister Peter Dutton, nor his post-Budget speech, and Croakey hasn’t been able to get an answer from Dutton’s office yet.

But the Australian Medical Association thinks the co-payments will hit people with chronic conditions, telling The Guardian that they “are likely to pay the co-payment for most of their normal visits to the doctor, which would be considered standard consultations”.

Considering all the leaking and testing of the wind that went on ahead of last week’s Federal Budget, there’s a shameful lack of detail on significant policies that causes confusion and anxiety for vulnerable people. We can only hope that Hockey or Dutton at least contacted Gunnis to clarify his position.

Dutton today was reported as saying the co-payment will only stop 1 per cent of people going to doctor in its first year. He doesn’t say which 1 per cent.

But doctors say appointments are already being cancelled by patients who fear the co-payment has already come in (if it can get through the Senate, it will be imposed from July 1, 2015).

There’s also a need for the evidence behind policy initiatives, if it exists, with Hockey justifying cuts to Indigenous programs and benefits for young unemployed people at a post-Budget event for the Australian Council of Social Service (ACOSS) on the basis that “the status quo doesn’t work”.

As ACOSS said: “If the government believes that this many people are rorting the benefit system it should provide the evidence, and that must extend beyond anecdotes.”

See this Storify account of the event put together by @robertleckie, and these tweets: 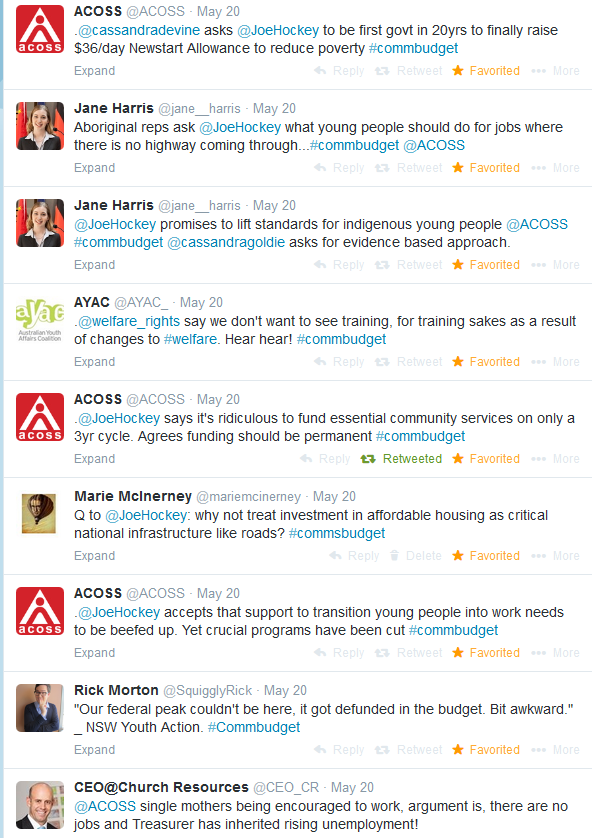 Pressed at the event about what job opportunities there could be for one remote South Australian Aboriginal community – where 60 per cent of the community are aged under 30, and 85 per cent of those are unemployed – Hockey said we should look to the findings of the Indigenous Jobs and Training Review being conducted by mining magnate Andrew Forrest (originally scheduled to report in April 2014).

We can park that alongside the welfare review being conducted by former Mission Australia CEO Patrick McClure and the forthcoming tax reform white paper which will surely find the opportunity, unlike this Budget, to look at revenue as well as expenditure.

This budget is set to have many adverse impacts upon the community’s health and will worsen health inequalities. At the very least, they could make sure those people who are likely to be hit hardest – including those working in services that will no longer be funded – know what to expect, and when. 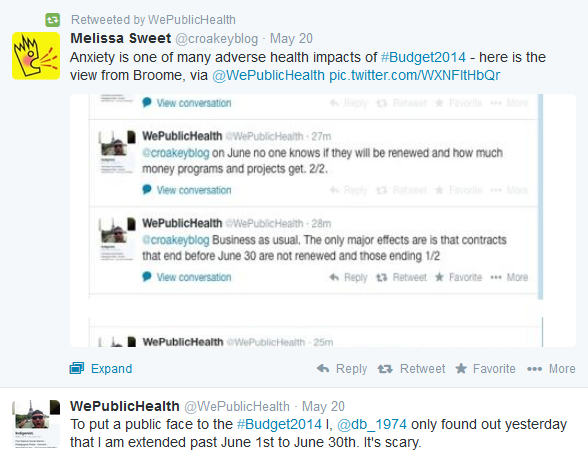 See below for other Budget concerns on dental care and a post from GP Peter Tait, member of the Public Health Association of Australia’s Ecology and Environment Special Interest Group, who says that, while the Budget has a glimmer of good news on environmental policies, it shows a deep lack of understanding of the real causes of human health. He says:

The strong commitment to dismantle the Clean Energy Futures package, wind up the Clean Energy Finance Corporation, close the Australian Renewable Energy Agency, the National Water Commission, continue subsidies to fossil fuel industries, provide billions for new roads, rail, ports and airports instead of ‘green’ jobs in manufacturing and renewable industry development support, is like a household closing the interest bearing deposits, not paying the insurance on the house at the beginning of fire season, and at the same time start to build an extension just as the kids are about to leave home.

It is clear that this government doesn’t understand the situation, hasn’t thought through the solutions and is recklessly abandoning key climate and energy policies, which will mean belated action to reduce greenhouse gas emissions will be more costly and lead to worse health impacts. Yet another opportunity for sensible governmental leadership has been lost.

The Royal Australian and New Zealand College of Psychiatrists (RANZCP) has also expressed concern about the deferring of 13 Partners in Recovery centres.

And if you haven’t read it yet, see John Mendoza’s important piece on the health risks of singling out young people.

Eight peak health organisations and ACOSS have called for the Federal Government to guarantee timely and continued funding for adult public dental health services, following a Budget deferral of the second National Partnership Agreement (NPA2). Their call follows a warning from the Australian Dentists Association that waiting lists will begin to balloon if a new agreement is not struck soon.

The current National Partnership Agreement (NPA) for public dental patients is due to end in March 2015 – the peak bodies (see the full list below) say its funds have led to a significant increase in low income patients being treated. The second agreement (NPA2) was scheduled to start on 1 July 2014 but the Budget proposes its deferral until 2015-16, cutting $390 million of care over four years.

In 2012 the former Labor Government announced a six-year, $4 billion dental reform package in 2012 that was targeted at low and middle income people. The Coalition promised before the 2013 election it would honour the NPA arrangements for public dental patients and continue to improve it as necessary. It said it would seek, at the expiry of the agreement, to transition respective adult dental services to be included under Medicare.

The peak bodies say other Budget measures also put dental care at risk, with the decision to de-fund the proposed $229 million Flexible Grants Program, which was to have provided for dental infrastructure in outer metropolitan, rural and regional areas, and changes to Family Tax Benefit A which are likely to reduce the number eligible for the Children’s Dental Benefit Scheme.

“Evidence shows that Australia’s lowest income-earners are more likely to experience complete tooth loss, live with toothache, or avoid food due to pain. This pain usually worsens, until sufferers with preventable dental disease visit their GP or crowd the Emergency Department of local hospitals which are generally not equipped to offer dental care. The cost to the economy of poor access to dental care, in preventable hospital admissions and lost productivity, is up to $2 billion a year.”

With Treasurer Hockey saying that the first duty of government is to protect the people, defend our borders, and “not leave our children worse off”, it is clear that global warming and the impact it will have on our health and wellbeing is not on his mind as a threat for Australians.

The budget demonstrates a deep lack of understanding of the real causes of human health. The measures to protect our environment and consequently our wealth, prosperity and health are poorly thought out. One cannot build a stronger Australia without safeguarding the environment on which our food supply and clean water depends. It is a missed opportunity to set Australia up properly for an economically strong, healthy future.

The strong commitment to dismantle the Clean Energy Futures package, wind up the Clean Energy Finance Corporation, close the Australian Renewable Energy Agency, the National Water Commission, continue subsidies to fossil fuel industries, provide billions for new roads, rail, ports and airports instead of ‘green’ jobs in manufacturing and renewable industry development support, is like a household closing the interest bearing deposits, not paying the insurance on the house at the beginning of fire season, and at the same time start to build an extension just as the kids are about to leave home.

It is clear that this government doesn’t understand the situation, hasn’t thought through the solutions and is recklessly abandoning key climate and energy policies, which will mean belated action to reduce greenhouse gas emissions will be more costly and lead to worse health impacts. Yet another opportunity for sensible governmental leadership has been lost.

There is a glimmer of good news: the National Climate Change Adaptation Research Facility (axed by Swan and Gillard) has been temporarily reinstated with three years funding and the Independent Expert Scientific Committee on Coal Seam Gas and Large Coal Mining Developments has at least been retained.

However the ironies of conflicting action submerge this tiny investment in our safe future:

This is disappointing. One would have hoped that a government that says it believes in the science and the severity of the threat would act like it did.

Bill Shorten’s response, while strong on rhetoric about wrong priorities and it being an agenda for a radically different Australia, only had a one-liner about the environment: “[the ALP] cares for the environment and takes the science of climate change seriously”. It would be good to see some policy on this, particularly given Shorten’s challenge: “if you want an election – try us.”