Australia today became the first country to dismantle an effective carbon market, taking a “monumentally reckless backward leap” that is an “economic attack on future generations” (and part of a wider pattern of this Federal Government’s attacks on the environment).

As one scientist, Professor Roger Jones from Victoria University, stated at The Conversation, the repeal of the carbon tax represents:

“The perfect storm of stupidity. It’s hard to imagine a more effective combination of poor reasoning and bad policy-making, a complete disregard of the science of climate change and its impacts, bad economics and mistrust of market forces.”

And Hugh Outhred, Senior Visiting Fellow, School of Electrical Engineering and Telecommunications, at the University of New South Wales, said:

“The Coalition’s plan to replace a “polluter pays” policy with a “pay the polluter” policy will exacerbate the budget imbalance while being simply inadequate for the task, while emissions trading schemes are too complex and too subject to gaming to earn public trust.”

No doubt this picture below of Federal Ministers (including the Health Minister) celebrating the House of Representatives vote last month will go down in history as symbolic for all the wrong reasons. 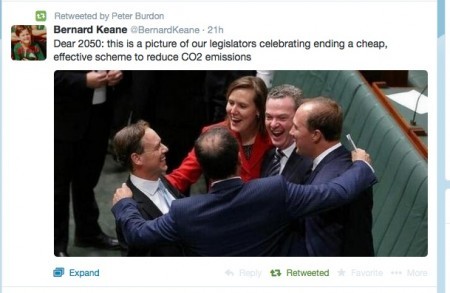 At the time this photo was taken, Croakey contributors were asked to suggest their own captions for the picture.

Their responses, below, give an indication of how many in the health sector must be viewing today’s repeal of the carbon tax.

The picture made me feel ill when I saw it.  My feeling was ‘despair’.

“…and then when you wondered what was wrong with a modest price signal in health, I just couldn’t stop laughing”

“See. If you don’t believe in climate change, it just doesn’t happen.”

“Wikipedia will remember us as a reforming government, acting to protect the long term interests of future Australian generations.”

Awful pictures, though. Will be printed in future history textbooks I hope.

“Can’t wait to get home and tell my grandchildren what I did to their future today!”

How clever are we? We got our way in spite of the evidence

Group hugs while we can still breathe

They’re going down with the ship, now!

Selling out our children’s future is so much fun, let’s see if we can do it via health & education too!

What does it spell? COAL!!

What a relief, Neville!  Peace in our time!

Congrats on another Mission Accomplished!  You did good with this; I’ll fix Gore. (Yrs) GWB

“Ha Ha, they bought it, now for the No Action bill”

Pyne says: “another reason to be thankful kids don’t vote!” And he would add later on “Now just need to make a university degree a compulsory pre-requisite for voting – those poor people have no chance!” with Dutton piping in “you know we could make ‘em pay to vote, like they will have to pay for a GP!” and the congratulatory back-slapping continues as they pile into their individual Commonwealth cars to take them home ( making sure their drivers don’t drive past any unsightly blights on the landscape like wind farms).
“I’ll call Gina to let her know the good news”
“Another victory for the Minister for Science…Oh wait.. Ha Ha Ha”

Ode to Carbon tax repeal (apologies to Keats – To Autumn)

With a sweet voting; to set polluting more,
And still more, later flowers die, poor bees,
Until they think warm days will never cease,
For Climate Change has o’er-brimm’d their clammy cells.

Miriam Hertzfeld, campaigner for action on the social determinants of health

Give away: Free hugs for climate change deniers

The left’s support for a carbon tax handed the Coalition an easy vote-winner. Even the smarter thinkers in the Greens know this, and tried to avoid having a carbon tax. All it did was hand government to Tony Abbott.

So my caption would read:

“Three cheers for the Left for handing us a carbon tax to repeal. They gave us government-on-a-plate.”

“Democracy ensures people get the governments they deserve” (Shaw)

Ring a Rosie, with us all falling down

the chimps that went feral

an embarrassment of primates

I quite like what Jim Chalmers MP (Member for Rankin) wrote – “Have you ever seen a group of people more delighted with themselves to sell out future generations? Hooray for carbon pollution! Hooray for trashing the environment! Hooray for turning our backs on a clean energy economy!”

We might be doomed, but that habitat was fun while it lasted.

Celebrating the perfect storms to come

Another one bites the dust!

I sold my waterfront property too!

Now we can light our bonfire!

And some more captions from the Twitterverse: 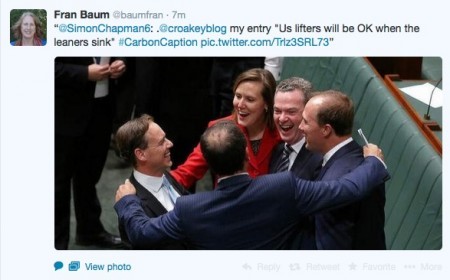 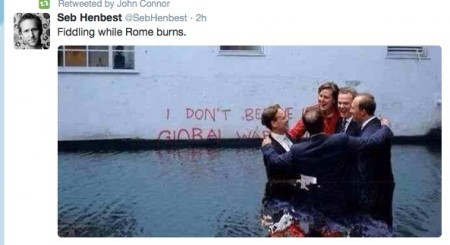 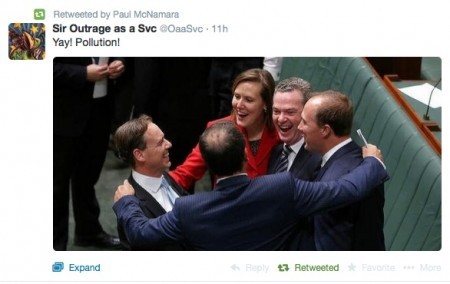 Perhaps we now need to start a caption competition for this image from the Senate today: 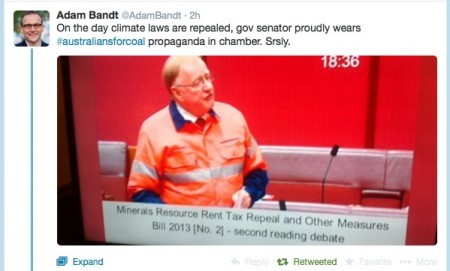 It’s noteworthy that the AMA did not want to comment on the carbon tax’s repeal – in stark contrast to the leadership shown by the British Medical Association’s support for divestment. 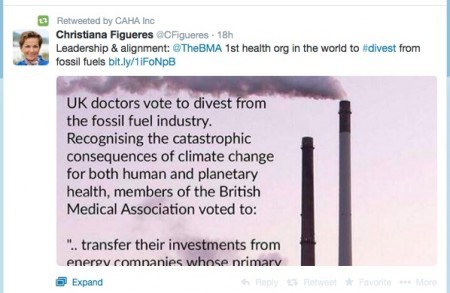 While the IPA indulged in some chest-beating… 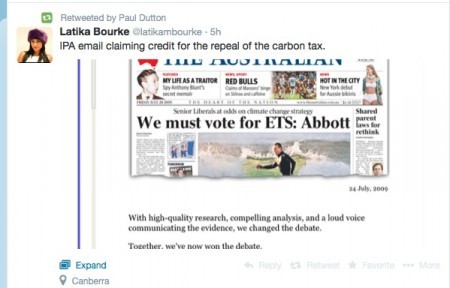 … many others were expressing dismay. 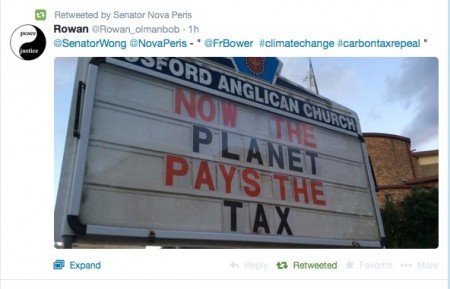 In this clip, citizens are urged to take a stand by representatives of public health, unions, environmental groups, civil society, and church leaders.

Meanwhile, speaking of historic moments. On this day, seven years ago…. 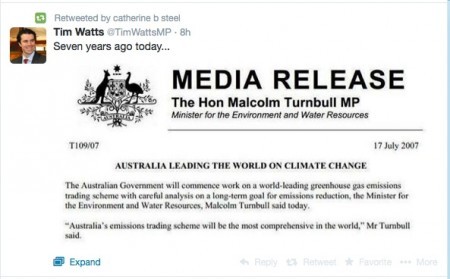