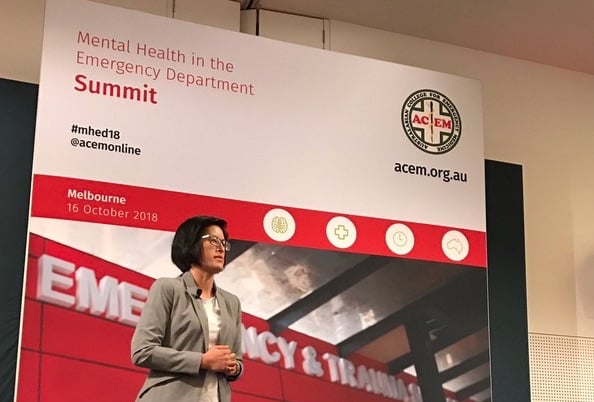 The Australasian College for Emergency Medicine (ACEM) expects to issue a consensus statement early next year with recommendations for improving the care of people presenting to hospitals with mental health problems.

The statement will be developed out of the Mental Health in the Emergency Department Summit recently hosted by the College in Melbourne, in partnership with the Royal Australian and New Zealand College of Psychiatrists (RANZCP). More than 170 emergency doctors, psychiatrists, consumers, clinicians, policy makers and researchers attended the Summit.

The videos and interviews below have been compiled by journalist Marie McInerney for the Croakey Conference News Service.

Why call the summit?

ACEM President Dr Simon Judkins talks to Croakey about why ACEM and RANZCP called the summit and how they hope the combination of clinicians’ and consumer voices will “send a really strong message to policy makers and politicians”.

In the leadup to the summit, ACEM published: The Long Wait: An Analysis of Mental Health Presentations to Australian Emergency Departments

Panel facilitator Dr Sue Ieraci, a specialist emergency physician, talks about risk averse systems and what ‘safe’ means, after admitting she was relieved to recently leave the public hospital system because “we were managing our own risk, rather than our patients”.

When we say ‘safe’, all of us should ask ourselves, ‘What do we mean by safe? Who is it safe for? Is it safe for their mental health, their physical health? Does ‘safe’ mean they can’t run away? What are we scared of? What is the patient scared of?”

Many health professionals dealing with people with acute mental health issues are driven by a fear of ‘missing some diagnosis’ because they are often seen as ‘complicit or even responsible’ if harm occurs as a result, Ieraci said.

But paradoxically, if we create distress by ‘containing’ that person, we’re not held to account for the distress we’ve caused them.

We’re actually in a sense worsening a patient’s safety in order to protect our own sense of safety, and I think that’s actually creating a bad workplace as well as a bad service.” 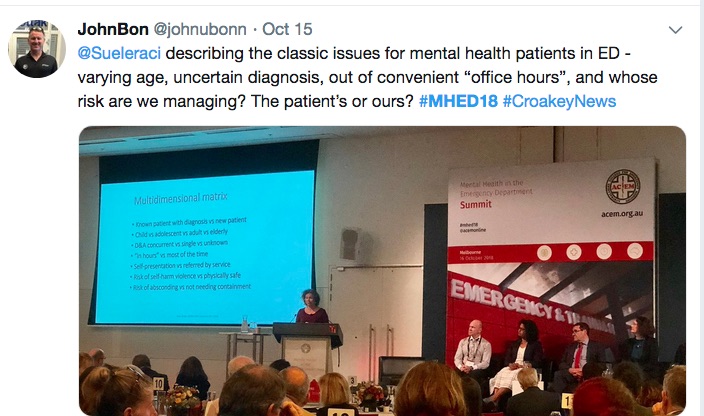 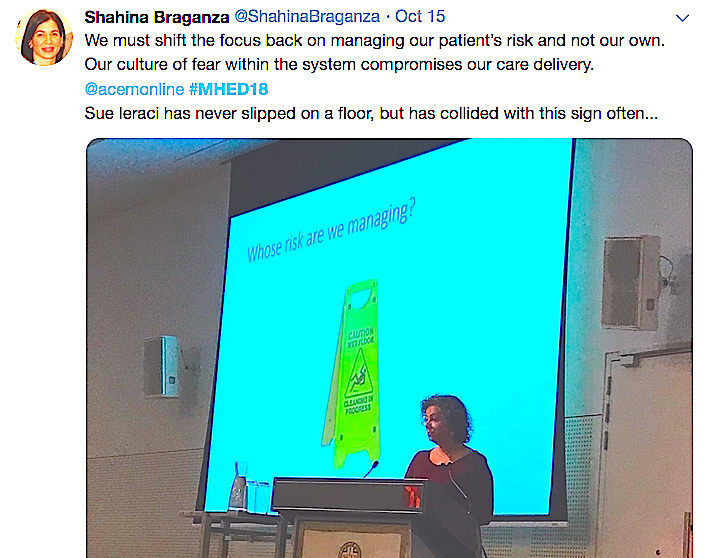 Ieraci put these issues to New South Wales Chief Psychiatrist Murray Wright, who last year conducted an independent review of seclusion, restraint and observation of consumers in NSW after the tragic death at Lismore Base Hospital of Miriam Meron.

The review was called after footage emerged of Meron naked, wandering the corridors covered in faeces, before dying of a brain injury after repeatedly falling and hitting her head.

Wright told the summit that a clear message from consumers and families to the review was that risk averse practice “sometimes happens at the expense of a compassionate and humane interaction with the person individually”.

“We need to give (health professionals) permission though to prioritise the engagement and individualised planning with the consumer and family and balance that against some of the rather rigid requirements we have in our policies and guidelines.”

Associate Professor John Allan, Executive Director of the Mental Health Alcohol and Other Drugs Branch at Queensland Health, also urged the summit to dig deep into issues like stigma and discrimination after watching a graphic dramatisation of the treatment of a patient in an Emergency Department setting.

“How did we get to this position… from people who are caring and want to do a good job, actually accepting this as a normal way of behaving?” said Allan, who is also President Elect of the Royal Australian and New Zealand College of Psychiatrists (RANZCP).

Renai Searle and Debra Sobott, both from Perth, talk about their lived experiences of acute mental health crisis from different perspectives and what needs to be done to address harms that are too often inflicted when people present via emergency departments.

They advocate the importance of a “healing personal connection” when a person is in mental health crisis – an overriding message from people with lived experience, peer workers, and many clinicians at the summit.

In her raw keynote account, consumer Fiona Nguyen talked about the lack of empathy she experienced during one presentation in Emergency, from the police who broke down her door at home and from hospital staff over the 27 hours she waited for a care decision.

“(Consumers) are looking for hope, relief, safety, salvation, connection, dignity and respect,” said consumer consultant Emma Bohmer. Instead they too often faced neglect and punitive responses, like restraint, forced medication and seclusion, and where “being mentally ill is almost criminalised”.

A delegate from Tandem, the peak body for friends and families of mental health consumers in Victoria, said standard emergency department practice should be to ask: “Is there someone who would like to know where you are, who you would like to sit beside you? 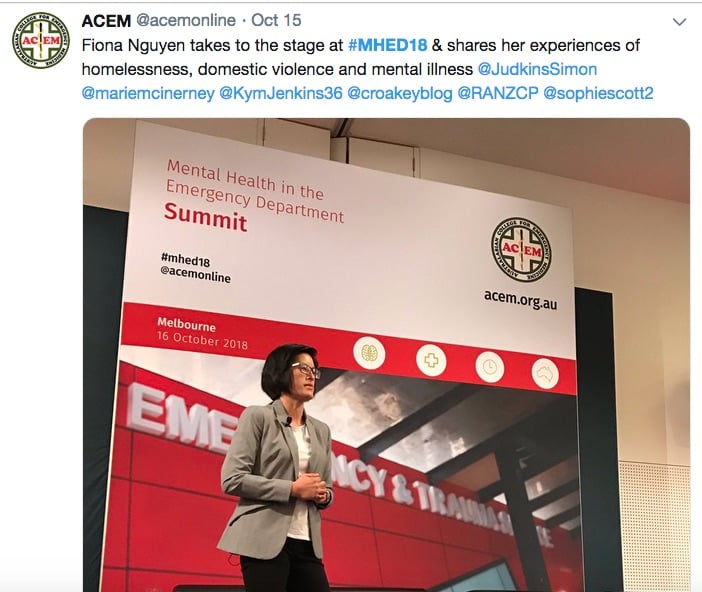 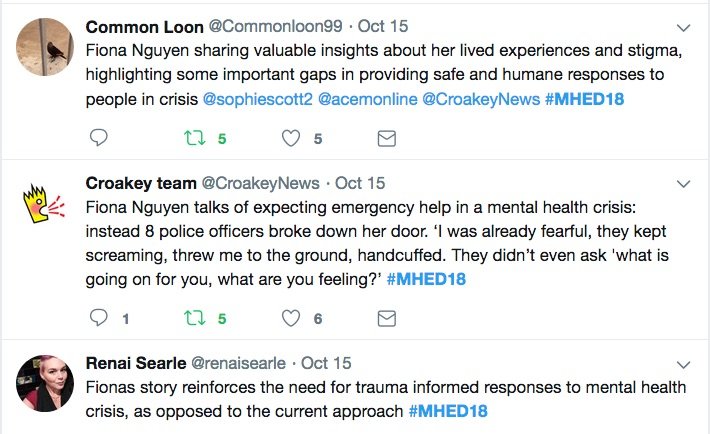 In this short video interview that was played at the summit, Anthony Stratford, Mind Australia’s Principal Advocate Lived Experience, talks about his work on a research project.

It is looking to identify the optimal role for peer workers in emergency departments, given they are “often poorly equipped, in relation to the physical environment, knowledge and personnel, to respond appropriately to people who present with mental distress”.

Stratford, who is diagnosed as having bipolar, said peers are very good at building a relationship with a patient quickly because of the shared journey, but “just because you have a lived experience of mental ill health and recovery does not equate to becoming a good peer worker”.

Peers, he said, need to be properly trained and supervised.

“If you want to create an effective peer workforce, it has to be top down, with education also for the rest of staff about peers, what they bring, and how they can become an integral part of a multidisciplinary team.”

What peer workers uniquely bring, he said, is the ability to stabilise a patient “but also to find out in a deeper sense what has led them here (to the ED).

“(It’s about) instilling hope in the people they work for. If the person themselves doesn’t have that hope for recovery, then the peer will hold their hope until they can take it back.”

Concerns for rural and regional patients

In this quick vox pop, Professor Neale Fong, chair of the Western Australian Country Health Service talks about the distressing treatment faced by rural and regional people in mental health crisis, particularly many Aboriginal people, who are often anaesthetised while they are flown to capital cities for treatment.

“That’s not good enough,” he said.

In particular are the unique challenges for Aboriginal and Torres Strait Islander people if they are sedated and taken by plane, away from family, community and culture.

“What we’re really trying to do is to make sure people can access the care they need much closer to home,” he said.

The summit also heard from Kim Mulholland, a descendent of the Larrakia Nation and Yanyuwa Clan group of the Northern Territory, about providing culturally safe care for Aboriginal and Torres Strait Islander people

Mulholland warned that many services try to deliver culturally appropriate or relevant services for Aboriginal and Torres Strait Islander people, but don’t think about the larger system they operate in that is “often at odds with community and cultural needs”.

Cultural supervision “should be as mandatory as clinical supervision, built into our clinical governance frameworks,” he said. “Otherwise we do run the risk of pathologising culture.” 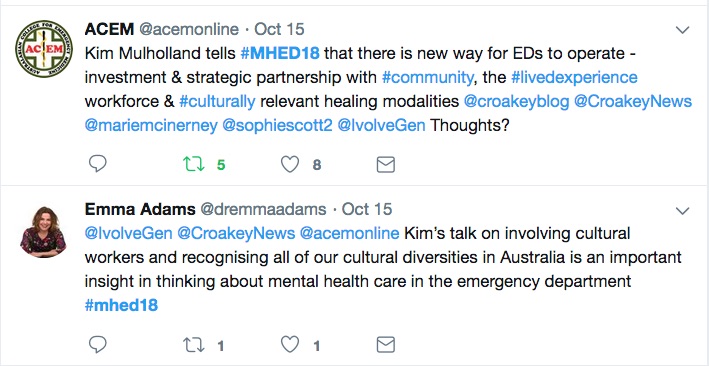 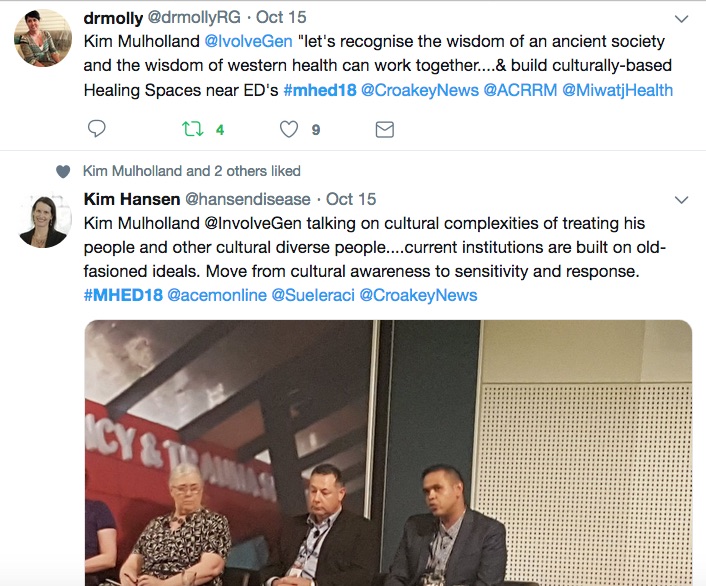 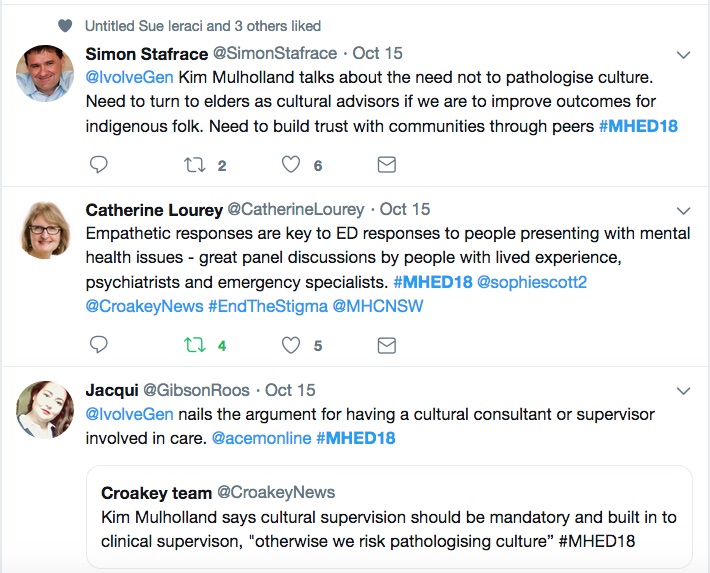 It was one of number of featured initiatives aiming to provide better spaces or mixes of specialties in emergency departments for people with acute mental health issues.

Preiz said the new unit, to be opened by mid 2029, is being developed so the Emergency Department can better manage, physically and clinically, an increasing number of patients presenting with mental health as well as drug and alcohol related conditions.

He said between 10-15 percent of ED presentations now involved both mental health and drug and alcohol conditions – “quite unwell patients, very demanding on staff, who need quite specialised physical requirements, safe for them and safe for other patients”.

What we’ve ended up with, I hope, is a completely different way of managing this, and to do that we’ve effectively redesigned the whole department.”

While some of the budget for the new unit has come from NSW Health, after “a process of writing endless submissions and making business cases”, much of the funding has come via philanthropic sources.

This is an avenue that others at the summit noted is not available to many other emergency facilities, particularly those in suburban or rural and regional areas.

Preisz revealed that landing on the PANDA acronym was contrived and allowed a “cute” logo. The unit’s advocates ran a “guerrilla campaign” while trying to get approval and funding, putting up photos of pandas around the hospital “to get a groundswell of support”.