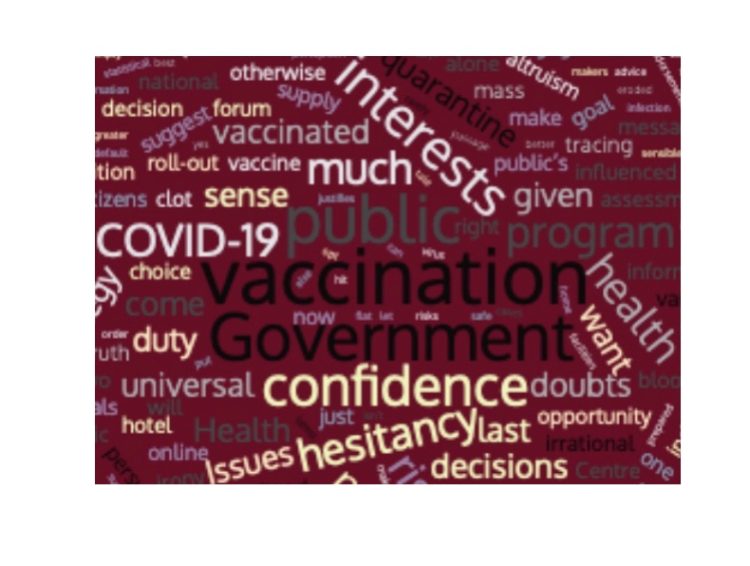 Building confidence in COVID vaccination: what will it take?

Amid widespread concerns about Australia’s COVID vaccination rollout, the Health Issues Centre is holding an online forum tomorrow (6 May) to address the general public’s questions around COVID vaccination and vaccine hesitancy.

The Centre’s executive director Danny Vadasz argues below that governments are contributing to vaccine hesitancy through “patronising discourse” and by undermining public trust and confidence generally in the pandemic response.

“Really, for any Victorian aged over 70 I’m afraid it is your duty now to come forward and get vaccinated”

Two weeks ago Powerball hit a jackpot of $80 million – a post pandemic high. An estimated one-quarter of the national population bought tickets peaking on the Thursday afternoon prior to the drawer in the frenzied sale of 4,367 tickets in store and online in one minute. So?

In the same week, politicians and senior health chiefs began spinning the proposition that the average citizen had as much chance (or less) of contracting a blood-clot from AstraZeneca as they had of winning Lotto.

Now think about the subliminal messaging behind the irony.

The millions of Australians who parted with their money knew that statistically they had Buckley’s hope of winning. But they still bought a ticket. How come?

Because decisions about risk and return are rarely based on science alone. A variety of factors, including risk appetite, superstition, personal anecdotes, spiritual guidance and irrational optimism, clearly weigh more heavily than maths – otherwise casinos would stand empty, Powerball would be Puffball and no one would be worried about a highly improbable blood clot.

Ergo there is no point trying to change mass behaviour by invoking probability theory.

The real irony though in this tale of contrariness is that, to make their analogy, health authorities chose the most perfect example you could find of mass capitulation to irrational, impulsive improbability.

Sadly, that misstep is emblematic of the entire campaign of public persuasion that has rested on the singular proposition that when it comes to vaccination – there’s nothing to worry about – just take our word for it.

As a consequence, public vaccination hesitancy is no longer just about the quality and safety of specific vaccines but reflects underlying concerns about non-disclosure, absence of choice and increasingly fragile trust.

The messaging so far

Consider the key messaging of the last few months, both overt and implicit.

AstraZeneca was touted as a gold-standard vaccine, right up until it wasn’t. Having been lauded by the Government as the bedrock of our national vaccination strategy, initial cautionary signals from Euro block officials were dismissed up until the very moment the Government withdrew supply from those under 50.

It was so committed to all-out reassurance that it trivialised inconvenient doubts until the weight of evidence necessitated a backflip.

Subliminal public takeout: So what else aren’t they telling us?

As hesitancy rates rose, the Government decided it needed to appeal to altruism, calling on citizens to do the  right thing by their country. This peaked with the patriotic callout by Victoria’s Commander of Testing and Community Engagement, Jeroen Weimar, to people over the age of 70 that “it is your duty now to come forward and get vaccinated”. Population vaccination (aka herd immunity) is the overarching imperative and if there are a few individual consequences, that’s acceptable collateral damage.

Subliminal public takeout: The Government totally cares about the population and the economy but not so much about the individual.

While the two themes of altruism and improbability theory may have dented public confidence, vaccination participation decisions are also influenced by the broader assessment of the entire COVID-19 protection program.

And here, a further factor shaking community confidence is the fumbled roll-out of the vaccination program. Bold targets subsequently abandoned, blame-shifting between governments, scapegoating of supply chains and fudging of figures lends weight to a sense that the Government is defaulting to political semantics (otherwise known as weaselling).

Currently, Australia relies on a two-pronged strategy to prevent community contagion: A universal vaccination roll-out promoted as the ultimate solution and an “interim” hotel quarantine program supported by contact tracing and testing in the event of virus leakage.

The public’s assessment of the competency and trustworthiness of authorities isn’t siloed between those initiatives.

Concerns about the competency of quarantine and contact tracing programs have undoubtedly influenced vaccination confidence and trust.

Apart from the 14 documented cases of quarantine leakage into the community, controversies over the adequacy of ventilation systems, or purpose built versus adapted hotel facilities suggest the reassurances of government are at odds with inconclusive facts.

And in the last few days, the revelation that the Government’s resolute approach to population protection justifies denying safe passage home to its own citizens (let alone the prospect of incarceration), all contribute to a perception that in order to avoid a contagion and economic crisis, the Government is prepared to put individuals at risk.

So, given that universal vaccination makes eminent good sense to everyone (except those who would rather risk falling off the flat edge of the earth), what could be different?

The Health Issues Centre’s public consultations throughout the epidemic have consistently indicated that the community is eager to partner with governments to navigate the COVID-19 crisis, but they haven’t been given the opportunity to be part of the conversation.

They have been showered with statistical reassurances, celebrity endorsements and appeals to patriotism without so much as an acknowledgment of their complex daily struggles and lived experience.

When they dare to express doubts, they are dismissed as ignorant, gullible to conspiracy theories or simply anti-vaxxers. Yet their doubts are much more nuanced than the banner headlines regaling the latest blood clot would suggest.

Consumers want to make informed decisions that are in their best interests and the interests of their loved ones. They want to be given choice, and they want all the truth or at least an admission when truth is not yet available or if the facts are contestable.

Their trust in politicians and health authorities has been eroded by the opacity and patronising discourse of the last 18 months.

Statements by public health officials that it is the “duty” of consumers to be vaccinated reinforce a sense that while the Government has the interests of the population and the economy at heart, it is left up to individuals to act in their own and their family’s interests and those two sets of interests do not necessarily coincide.

The COVID-19 pandemic elicits a strong emotional reaction in us all as we listen to expert commentators and reconcile their advice against our own experiences and the experiences of others we know or hear about.

But it is by listening, discussing and questioning that we will gain confidence and reach an informed decision. Most of us understand that universal vaccination is a desirable goal if we are to eliminate COVID-19 morbidity and minimise transmission. But this goal won’t be achievable if the current hesitation rates prevail.

The Health Issues Centre next forum “Vaccination Hesitation – Paranoia or sensible caution” is an opportunity for consumers to directly engage with decision makers to explore and better understand the risks and benefits of a variety of infection prevention pathways.

Hopefully that way we can build confidence in the vaccination program and those who are responsible for it.

Otherwise there is a good chance people will default according to the adage “when in doubt, opt out”.

The alternative strategy, relying on blanket reassurance and persuasion, is likely to generate more suspicion, mistrust and yes, greater hesitancy.