An Australian Institute of Health and Welfare report has examined the short-term health impacts of the 2019–20 bushfire crisis. Photo from NSW Rural Fire Service tweet.

Introduction by Croakey: Few Australians have been untouched by the devastation caused by the 2019-2020 bushfires.

Thirty-three people lost their lives as a direct result of the fires, more than 3,000 homes were destroyed, around 17 million hectares were burned across six states and territories, and experts have estimated that this charred land would have been home to three billion native vertebrates.

This week an Australian Institute of Health and Welfare (AIHW) report found a significant uptake of bush-fire related mental health services, a surge in emergency presentations for respiratory problems (in NSW), and a spike in the dispensing of asthma medications.

While the full extent of the health impacts of the 2019-2020 bushfire crisis are likely to be revealed over the coming years, the AIHW has provided an important snapshot of the short-term health impacts.

More than 5,000 people accessed a total of 18,945 bushfire-specific mental health services up to mid-October, the report found.

One in two adult Australians reported feeling anxious or worries in the direct aftermath of the bushfires, the AIHW reported, citing research from the Australian National University.

Lifeline reported a 10-15 percent increase in calls to its crisis line, compared to the same period the previous year, prompting the organisation to introduce a bushfire-specific call line.

The report warned that the effects are likely to be felt in the months and years to come.

With more than 3,000 homes lost in the crisis, the report also found an increased call on specialised homelessness services in the wake of the bushfire crisis. 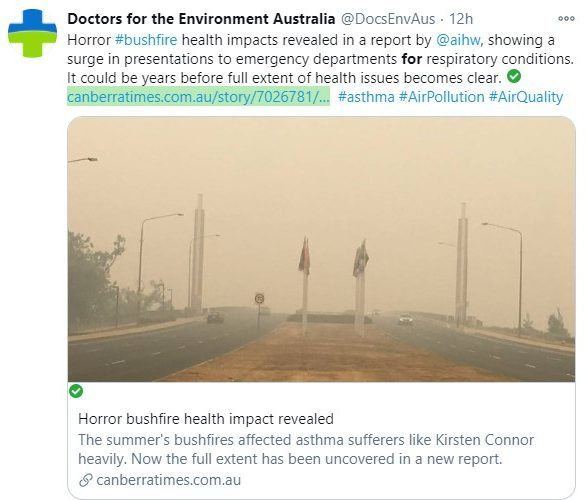 NSW emergency department presentations for respiratory complaints were higher in the 2019-20 bushfire season compared with the same time the previous year.

And some areas were more affected than others. For example, in the Riverina district – the site of the the Dunn’s Road megafire – emergency department presentations spiked by 86 percent in early January, compared to the same week in 2019.

In the Capital region, emergency department visits for respiratory complaints were 50 percent higher than for the same time the previous year. This may not be surprising, given Canberra’s shocking air quality – reaching up to 2,496µg/m3 – was, on some days, the worst in the world.

The report also found that emergency department presentations for asthma increased in December 2019, including a 57 percent spike in the week beginning 29 December (from 4.4 to 6.9 presentations per 100,000 population).

The AIHW report pointed to Pharmaceutical Benefits Scheme (PBS) data that showed increased dispensing of asthma reliever medication (including salbutamol) in line with bushfire activity. (PBS data does not include over-the-counter sales, or hospital or private prescriptions.)

For example, in the week beginning 29 December, the Capital region – which takes in Bateman’s Bay – asthma reliever prescriptions were up 63 percent compared with the same time the previous year. In the Coffs Harbour–Grafton region, sales spikes of up to 70 percent were reported.

Private data agency IQVIA, which tracks over-the-counter and prescription sales of inhalers (including salbutamol or terbutaline), also found steep sales increases in line with bushfire activity. The Mid North Coast region, for example, saw a 144 percent increase in sales of these inhalers for one week in November compared with the same week in 2018. Several fires burning at
Emergency Warning level in the area at the time.

Professor Brian Oliver, who leads the Respiratory Molecular Pathogenesis Group at the University of Technology Sydney and the Woolcock Institute, said while the report findings were largely as expected, the spike in inhaler sales was surprising. He said:

The report did not examine who was buying these inhalers: was this people with pre-existing lung diseases buying life-saving medications, or was this people panic buying as we have seen with COVID-19?

Prescriptions for the same medication also increased during the same period, so at least some proportion was related to medical need.”

Responding to the report, Asthma Australia called on the Federal Government to support a AirSmart Campaign.

“Australia is behind other countries in terms of monitoring and reporting and providing the community the access to tools to better avert being exposed to poor air,” said Asthma Australia CEO Michele Goldman.

Although evidence suggests that cardiovascular and cerebrovascular health are affected by bushfire smoke, the AIHW report noted that this was not reflected in emergency department presentation data in the time of the fires.

The authors said this may be due to the community heeding public health warnings to stay indoors and reduce smoke exposure.

While beyond the scope of the AIHW report, the report authors wrote that research from previous fire events had found impacts on burns, eye health, substance and alcohol abuse, and domestic and family violence rates.

“A number of pressures on people’s lives emerge in the wake of a bushfire,” they wrote.

“Homelessness, unemployment and drug and alcohol use have been observed to increase after bushfires, and experiencing bushfires can cause immense stress, trauma and grief.

“These factors have been cited as possible underlying factors in observed increases in domestic violence following natural disasters, including bushfires.” 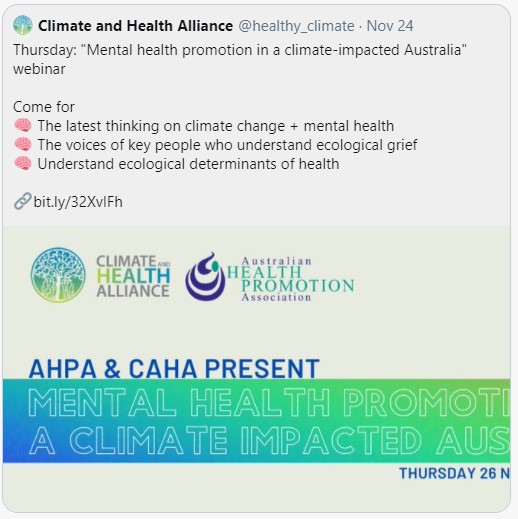