Caffeine Watch: a few reasons to be cautious of stories spruiking coffee as a health tonic

Croakey has a confession: marketing campaigns promoting the health benefits of particular foods, drinks or components thereof generally bring me out in a mood-threatening allergic reaction.

I won’t go into all the whys and wherefores right now – there is probably a book to be written, if it hasn’t already been, about the myriad of reasons why such health claims should be approached with caution.**

But I thought it worth briefly drawing to the attention of Croakey readers a Nescafe advertising campaign now running in the medical magazine, Medical Observer. The full-page ads promote research showing an association between daily coffee consumption and reduction in risk of type two diabetes.

The ads reference this systematic review published in the Journal of the American Medical Association in 2005, and this 2009 systematic review in Archives of Internal Medicine (abstract only freely available).

Our meta-analysis of observational studies cannot prove causality. Longer-term intervention studies of coffee consumption, including appropriate measures of postprandial hyperglycemia and insulin sensitivity, are warranted. In addition, studies of different coffee constituents are worthwhile because this may lead to the development of coffees that can maximize health benefits. Currently, it is premature to recommend increasing coffee consumption as a public health strategy to prevent type 2 diabetes, and other health effects of coffee should also be considered.

Experience teaches that an advertising campaign like this, directed at doctors and other health professionals, is often followed by a PR and marketing campaign directed at the general public, via the media. The idea being that you first get the doctors onside, so that they are appropriately briefed when patients ask about the story they heard on the news last night “about coffee being good for diabetes”.

So if a rash of stories crops up in coming months investigating the supposed health benefits of coffee, it may pay to be more than usually sceptical about why these stories are being done.

The coffee industry has form when it comes to promoting health claims.

CoSIC, the pan-European Coffee Science Information Centre, was established in the UK in 1990 by ISIC, the Institute for Scientific Information on Coffee, which is made up of senior executives from major EU food manufacturers. (Kraft, Nestle, Sara Lee, Paulig, Tchibo, Illycaffe & Lavazza)

CoSIC was set up to work with independent scientists to develop factual overviews of the large, and often conflicting, volume of data concerning coffee and its effects on health.

Through the collection of experimental data and contact with researchers, CoSIC assesses all the on-going and past medical research on coffee and caffeine being undertaken around the world. It maintains and regularly updates a scientific database that now comprises thousands of published research studies.

The aim of CoSIC is to provide accurate, balanced and consistent information to all audiences across Europe who have an interest in coffee, caffeine and health. The primary objective is to bring balance to the coffee and health debate.

Meanwhile in the US, the National Coffee Association has set up to www.coffeescience.org. The NCA, established in 1911, is the leading trade organization for the coffee industry in the United States. Its members, who conduct nearly 90% of the business of the US coffee market, include importers, roasters and retailers, as well as growers, exporters and suppliers. 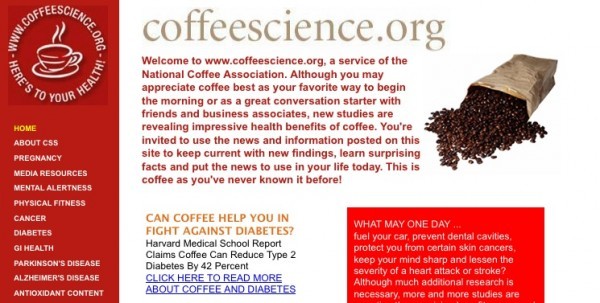 This website says: “Although you may appreciate coffee best as your favorite way to begin the morning or as a great conversation starter with friends and business associates, new studies are revealing impressive health benefits of coffee.”

** Just a few of the reasons for caution about health claims…

• Research into the health effects of particular foods/drinks or food/drink components is fraught with a zillion methodological problems which makes it difficult to draw hard and fast conclusions.

• Industry is unlikely to fund or promote research that is not favourable to its interests so you tend not to get the overall, objective picture from the promotion of health claims.

• Most of us need to be encouraged to consume less overall; the promotion of foods and drinks on the basis of health claims is aimed at promoting more eating and more drinking.

• Besides, if you want to reduce your risk of diabetes, there’s plenty else you could do other than dose up on coffee.

• Declaration: Croakey enjoys her coffee as much as the next caffeine addict…

PrevPreviousWhat else is revealed in the Federal Health Department’s document dump?
NextMedia and trauma professionals urge Gillard Government to stick up for AssangeNext