A coalition of health, welfare, and environment groups on Tuesday called for all candidates in the upcoming federal election to recognise climate change as a core public health threat and commit to supporting policy to respond.

The open letter to political parties and candidates, coordinated by the Climate and Health Alliance (CAHA) – which describes the signatories as an “unprecedented” coalition – calls for a commitment to the following action:

CAHA wants health professionals to “make this the climate and health election”, urging them to hand deliver the letter to local candidates and consider putting it up in workplaces. It says:

This federal election is shaping up to be a climate change election. As health professionals we are trusted and respected and therefore able to influence opinion on this issue.

We need to let the government know climate change is not just about power prices and mining. It is about people’s fundamental right to good health and well-being and that the health and economic cost of inaction far outweighs the cost of action.

Your voice is powerful and you can help bring effective climate action to Australia.”

The release of the letter comes as the Stop Adani Convoy, led by former Greens Leader Bob Brown prepares to set off from Hobart on Wednesday, sailing that night on the Spirit of Tasmania.

Timed for the federal election campaign, it will travel through Melbourne, Albury-Wodonga, Sydney, Coffs Harbour, Mullumbimby, Brisbane, Rockhampton – Yeppoon, Airlie Beach, the Galilee Basin mine region, Toowoomba, Armidale, and Orange-Bathurst, arriving in Canberra for a Vote Climate Rally on Sunday 5 May.

The CAHA open letter also follows the publication on Monday of an open access editorial in the Medical Journal of Australia, urging that Australia’s health systems are strengthened to cope with the coming challenges of climate change.

Australia needs action on three fronts, according to Professor Gerard FitzGerald, Professor of Public Health at the Queensland University of Technology, Professor Anthony Capon from the University of Sydney and Dr Peter Aitken from Queensland Health’s Disaster Management Unit. 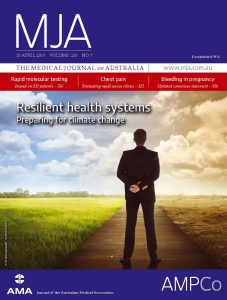 First, they say, is the need for a whole of system approach, that integrates all elements of population and health care throughout the continuum of preparedness, response and recovery: community, primary, hospital, and aged care, as well as public and mental health care.

Second is the need to improve surveillance.

“Current disease notification systems are slow and monitoring on the response capacity of the health system relies on individuals recognising and reporting emergency problems,” they say.

Third is the need to determine standards of care relevant to particular situations, including in extreme events “sympathetic care for people who cannot be saved”.

Writing of the need to reduce the carbon footprint of health care itself and to advocate that Australia play its part in dealing with the fundamental causes of climate change, Fitzgerald, Capon and Aitken say these approaches will mean “difficult discussions” for all health professionals in Australia.

They hope these will open up further at the World Association for Disaster and Emergency Medicine biennial congress in Brisbane next month.

An associated article in the MJA raises the failure to date to properly recognise and integrate the crucial role of GPs in disaster health management in Australia.

Dr Penelope Burns of the Australian National University and her colleagues say there is emerging evidence from academic literature and experience from the field showing a consistent pattern of primary health care needs presenting in disasters, but this ” major burden of care is yet to be incorporated into disaster management systems”. They write:

A GP’s role in the recovery phase is to manage the physical, psychosocial and social determinants of health effects that will continue long-after other responders have left. They have strong public health roles in surveillance as the eyes and ears of the community.”

In this accompanying podcast Faulkner said strong Federal leadership on climate and energy policy had never been more important.

“There has been a lack of leadership on climate and energy policy,” he said. “They are playing with the lives of our children and grandchildren — ‘intergenerational theft’ is the term being used.”

Open letter to MPs and parties

Here are some of the key messages from organisations that have signed up to the Open Letter.

Climate and Health Alliance Executive Director Fiona Armstrong: “These calls are backed by several decades of national and global scientific evidence, and the direct experience of hundreds of thousands of people around the world. We have already seen hundreds of thousands of deaths directly linked to the impacts of climate change. We must have urgent action to protect the people of Australia from further harm.”

Australian Council of Social Service (ACOSS) Senior Advisor Climate and Energy Kellie Caught: “There are more than 3 million people living in poverty in Australia  and they are particularly vulnerable to climate-related extreme weather events such as fires, floods and heatwaves because they do not have the resource to cope, adapt and recover. We need all political parties to commit to rapidly transition to a clean economy, with appropriate safeguards for people on low incomes, and help people adapt to the climate change impacts already locked in.”

Professor of Planetary Health at the University of Sydney, Tony Capon: “A recent global study published in The Lancet stated climate change poses an ‘unacceptably high level of risk for the current and future health of populations across the world’. It revealed a failure to reduce emissions threatens human lives and the viability of the health systems we all depend on. It is vital that climate change is recognised by policymakers as a core public health threat and responded to as the emergency it is.”

Public Health Association of Australia CEO Terry Slevin: “It doesn’t matter how healthy or fit you are, unless we have viable ecosystems to provide the essential services on which humans depend – clean air, soil and water, access to shelter – nothing else matters. Climate change threatens all of the ecological and social determinants of health and well-being. We have to ensure that policies at every level of government are in place to reverse our current trajectory on climate change – our health (and the health of future generations) depends on it.”

Australian Nursing and Midwifery Federation Secretary Annie Butler: “Nurses, midwives and personal care workers care for Australians at their most vulnerable. We are already witnessing the negative health impacts of climate change on people’s health. We are concerned about the current government’s failure to take effective and comprehensive action on climate change. We know that inaction is having serious consequences for people’s health and is placing pressure on the workforce and on the health budget. We are running out of time to avoid the worst impacts of climate change – we need all political parties to commit to strong policy action now to address this growing risk to our health.”

Australian Healthcare and Hospitals Association CEO Alison Verhoeven: “The health sector is at the forefront of climate action when providing care for Australians during extreme weather events and responding to new or redistributed diseases. The health sector can also be a leader and reduce its carbon footprint, but government stewardship and funding are critical.”

Greenpeace CEO David Ritter: “We stand alongside the health and medical community in calling for action on climate change as a health issue. There are only upsides to addressing air pollution from coal and transport, for instance – fewer health problems across the community, our kids growing up stronger and healthier, and the slowing of global warming.”

Australian Conservation Foundation Kelly O’Shanassy: “Australians are already experiencing climate change damage through record-breaking heatwaves, droughts, bushfires and floods, which are getting worse as we continue to burn coal and create other pollution. These extreme events harm the health and wellbeing of Australians and there is clear evidence the young, elderly and pregnant are most at risk. We also know the solutions to climate change will be a win for public health. Clean energy and electric cars will mean cleaner air and less smog choking our cities and towns. All parliamentary candidates and political parties need to know Australians care about the air we breathe, the water we drink and the climate we leave to our kids.”