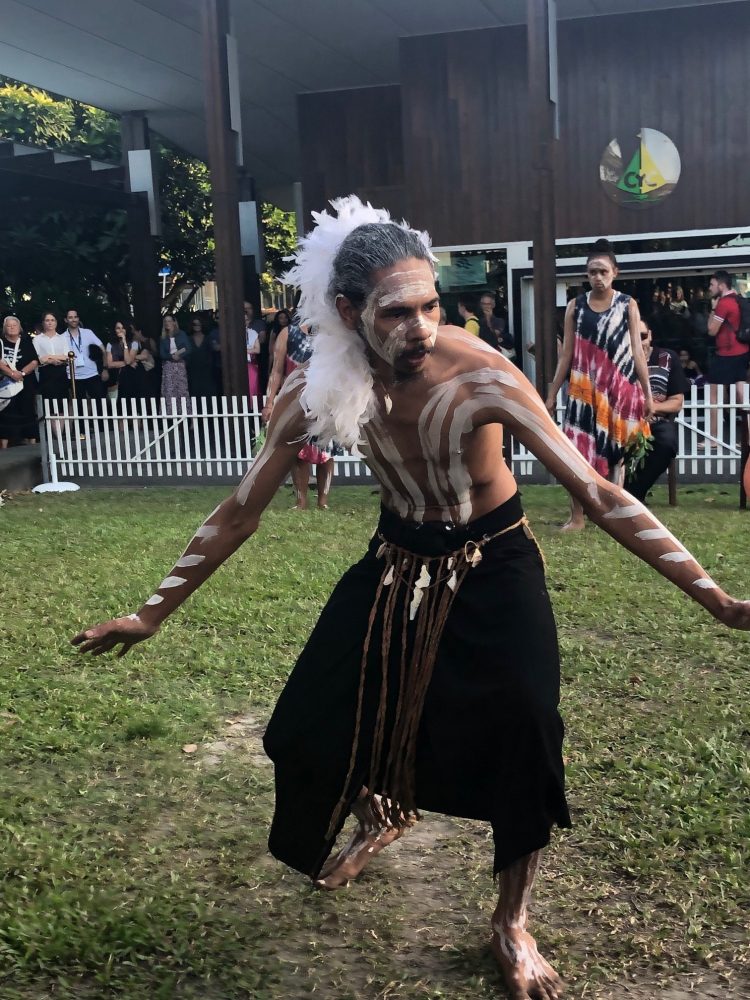 Climate change, species extinction and habitat loss pose a risk to mental health and psychiatrists have a duty of care to speak out on the “radical action” required from our leaders as Australia prepares to go to the polls this weekend.

That was the message delivered by Professor Ernest Hunter, opening keynote speaker at the Royal Australian and New Zealand College of Psychiatrists’ 2019 Congress in Cairns this week.

Sporting a #StopAdani t-shirt as he delivered his opening address on mental health in remote Indigenous communities, Hunter later lamented the “slow-motion ecological catastrophe” of the Great Barrier Reef, on the doorstep of this week’s psychiatry summit #RANZCP2019.

Outgoing College president Dr Kym Jenkins urged her colleagues to embrace a greater advocacy role ahead of the meeting, delivering her “woeful” verdict on mental health funding and policy ahead of this weekend’s #AusVotesHealth Federal Election.

Croakey journalist Marie McInerney is in Cairns for the Croakey Conference News Service, and reports on a thought-provoking first day of sessions centered on the theme ‘Continuity in a world of change: culture, diversity and mutual learning’.

Psychiatrists have a professional responsibility to demand “radical action” on climate change, including to campaign against destructive environmental proposals like the Adani coal mine in Queensland, high profile psychiatrist Professor Ernest Hunter said on Monday.

“I think all psychiatrists should think about the environment in which the next generation is  going to develop,” Hunter told Croakey after delivering the opening keynote address at the Royal Australian and New Zealand College of Psychiatrists’ annual congress in Cairns.

“We need to be blind not to see there is a role for people in positions of leadership and responsibility thinking about the ways in which (climate change) impacts our field,” he said.

Hunter wore a #StopAdani t-shirt for his address, as did Professor Peter Sainsbury, past president of the Public Health Association of Australia, in a keynote at the recent National Rural Health Conference which also urged stronger action on climate change. 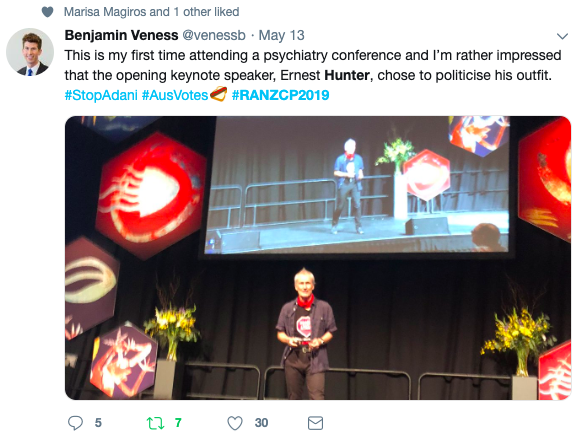 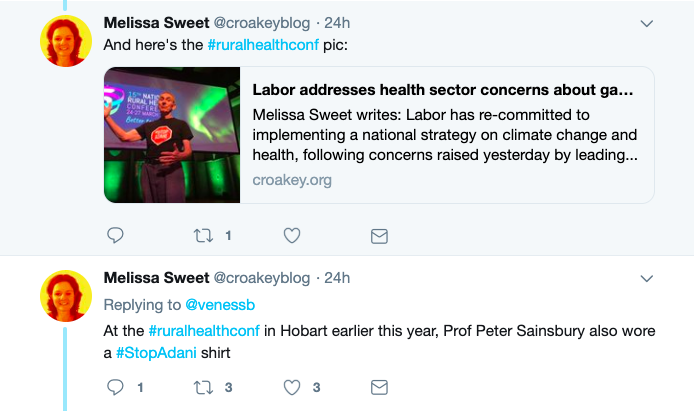 Hunter’s was a timely and well-placed call for action – days out from the May 18 federal election and in Cairns, the gateway to the Great Barrier Reef, which would be under threat from the Adani mine both through the impact of global warming and from plans to export the coal to India via a shipping terminal on the Queensland coast.

Scientists last year identified for the first time an association between mean annual maximum temperatures pushed higher by climate change and suicides, according to the MJA–Lancet Countdown on health and climate change, which said that hot days in Australia “have a damaging effect on whole-population mental health equivalent to that of unemployment, and predict hospitalisation for self-harm.”

Polling done for the Lowy Institute shows that Australians rate climate change as “a critical threat”, and Hunter’s rallying cry to colleagues echoes similar sentiments from last year’s annual scientific meeting of Australian and New Zealand emergency doctors, where Doctors for the Environment Australia chair Kingsley Faulkner delivered an impassioned plea for medical professionals to speak out on the issue.

Ahead of the RANZCP congress, outgoing president  Dr Kym Jenkins said psychiatrists need to become stronger in their advocacy for vulnerable groups and “to be less afraid of speaking out when we see injustice, or when we see things that aren’t fair or aren’t right”.

Hunter, who was introduced by RANZCP president-elect John Allan as a “legend of the North”, worked for decades in remote Aboriginal and Torres Strait Islander communities in the Kimberley and Cape York.

He addressed the congress on the changing patterns of mental disorders in remote Indigenous communities. Croakey will report on that and other presentations on Indigenous mental health issues in the coming days.

Now retired, Hunter has just published a book, titled Vicarious Dreaming, that documents a series of his frequent kayak voyages between Cairns  and the Torres Strait, amid “the slow-motion ecological catastrophe” of the Great Barrier Reef.

“As a health professional, I’ve always thought we should take a precautionary approach, I don’t think we need to wait for the end to say whether we have all the data in. 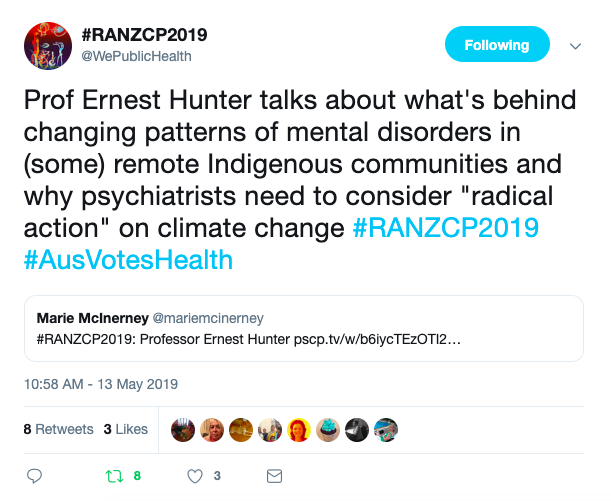 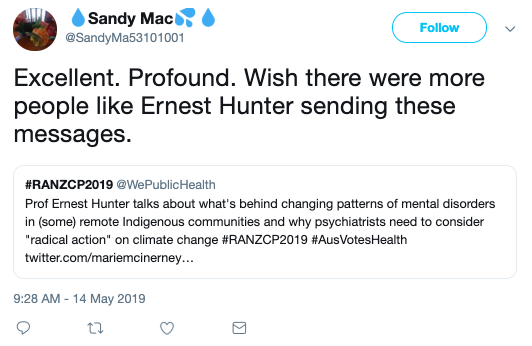 The RANZCP’s advocacy on climate change recognises a “wide range of deleterious health effects including mental health problems and health risk behaviours, as well as effects on other social and behavioural domains”.

Its position statement on the mental health impacts of climate change warns that children, people from culturally and linguistically diverse communities, rural and remote communities, the elderly and people with pre-existing psychiatric disorders and medical conditions are more vulnerable.

“Indigenous people with close emotional and ancestral ties to the land are also likely to be disproportionately affected by environmental change and extreme weather events,” the statement says.

Rape of the soul

Hunter’s appeal followed a call to psychiatrists to work to stem the trauma and loss still being wrought on Aboriginal and Torres Strait Islander people by the destruction of their physical and cultural environment and loss of traditional knowledge.

Henrietta Marrie, an Elder of the Gimuy Walubara clan of the Yidinji people, the Traditional Owner of the land on which the City of Cairns and its southern suburbs are now located, delivered the Welcome to Country at the congress.

Marrie told delegates from around the world about the impact of colonisation on the Yidinji people through massacres, rape, the removal of children, and forced dislocation – quoting Indigenous author Kevin Gilbert who described it as “a rape of the soul so profound that the blight continues in the minds of most blacks today”.

“That impact is still felt, not just by my Yidinji but by many other Indigenous nations around Australia, and it’s this psychological impact that still bears the scars, that still tortures and has traumatic impact on our people today,” she said.

Marrie said environmental degradation – including last week’s news that a million species are now threatened with extinction – was adding to that blight.

“A lot of our knowledge systems associated with those species are being lost, and our language, through land degradation, the extraction industry, urban development,” she said. 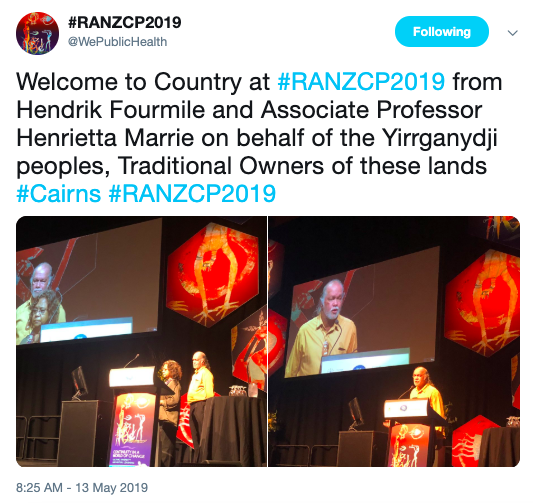 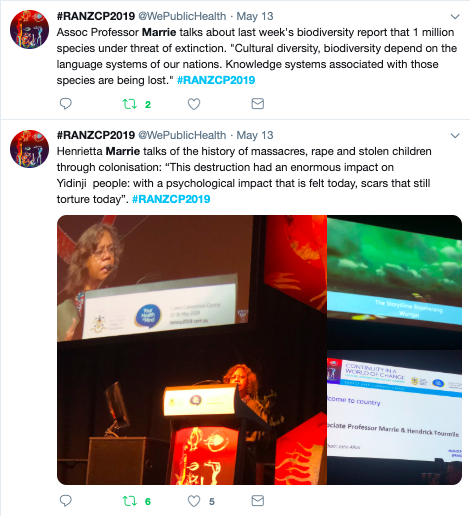 We reported on innovative Torres Strait Islander research being done in this space presented at the Lowitja Institute’s recent knowledge translation forum — read more about that here.

Both Marrie and her brother Henrick Fourmile, who also spoke to the congress, are involved in significant international efforts for Indigenous peoples.

Fourmile travelled to Munich last month for the historic return by Germany of the remains of 53 Aboriginal ancestors to the Yidinji and the Yawuru community in Western Australia, marking one of the largest-ever repatriations.

Marrie returned to Cairns last week from New York after playing a senior role at the United Nations plenary meeting of the 18th Session of the Permanent Forum on Indigenous Issues.

She has previously served with the UN Secretariat of the Convention on Biological Diversity, and now also oversees CQUniversity’s First Peoples’ Think Tank and Research Centre, located within the Office of Indigenous Engagement.

Marrie’s paper, Emerging trends in the generation, transmission and protection of Traditional Knowledge, set the scene for the UN Forum’s discussion, warning that traditional knowledge is under threat along with the environment.

Urging RANZCP delegates to bring the issues she raised into their discussions, she said the environment inhabited by her people around Cairns — keepers of the creation story of the Great Barrier Reef — was “not just hills and landscapes”.

“It validates and values our culture and history.”

Attending the Pacific Region Indigenous Doctors Congress in Hawaii last year, she had learnt that Native Hawaiians have over 2000 words for rain and 42 words for clouds – “so important are the elements to their sense of identity and understanding of a collective self”.

“This is a reminder to us of the important connections between the natural environment and health, particularly mental health,” she told the congress.

Day One of the RANZCP Congress featured a range of discussions across topics as diverse as food, mood and the microbiome to ADHD, autism, eating disorders and first responders’ mental health. We will have more stories from these sessions in coming days.

There was also a popular workshop from Dr Ben Veness on social media use in medicine.

We’ve clipped some of the tweets below. 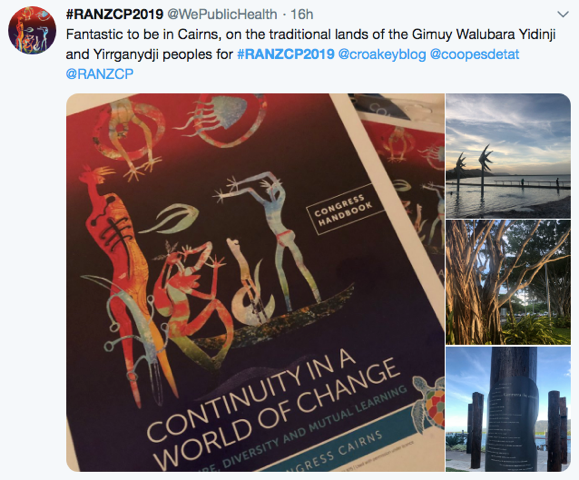 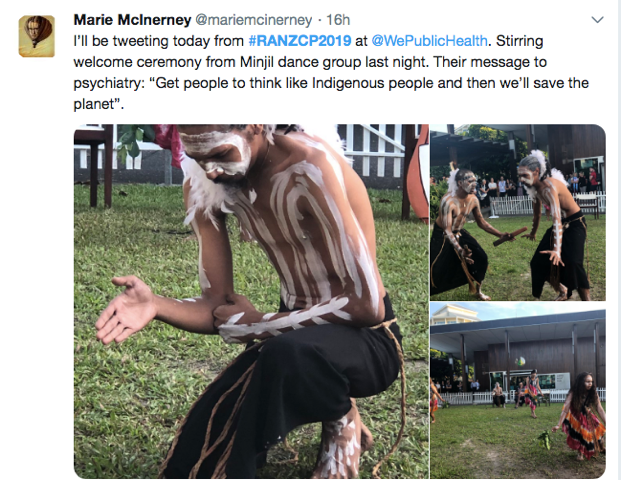 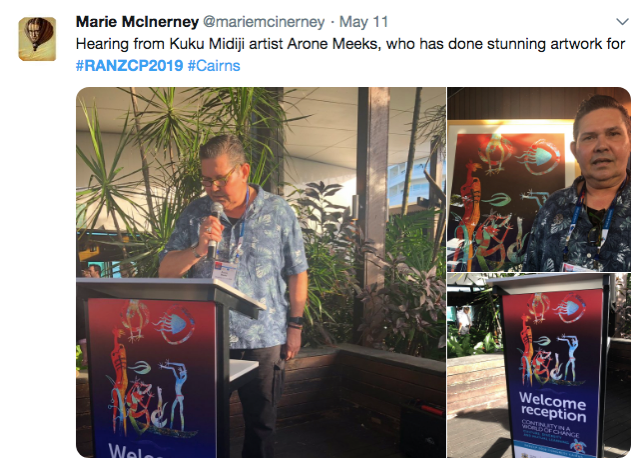 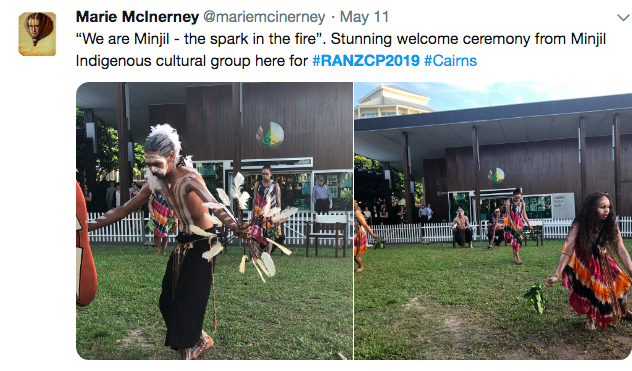 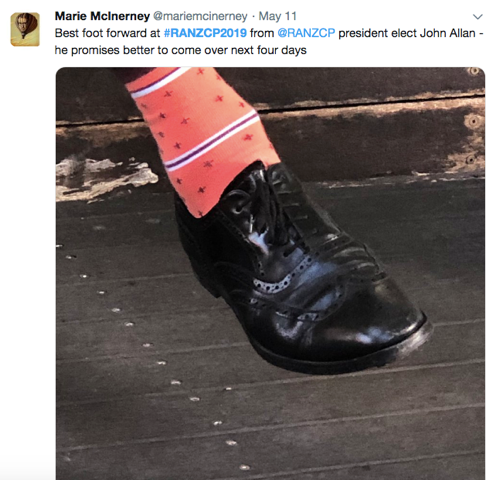 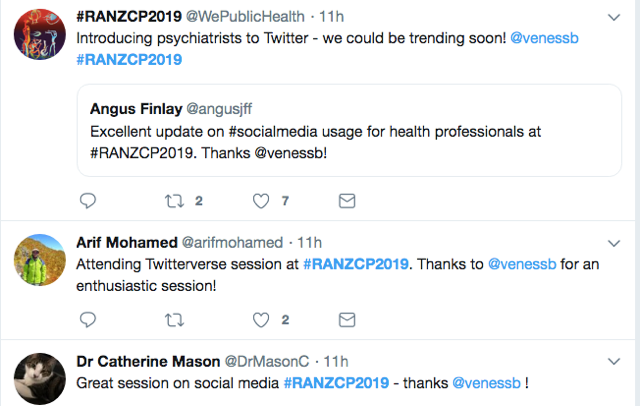 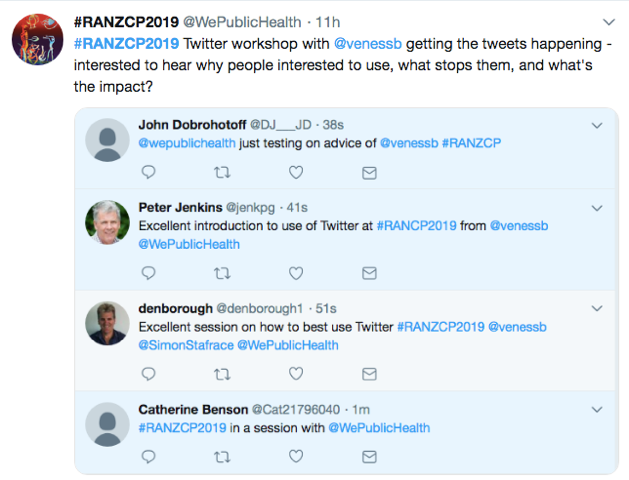 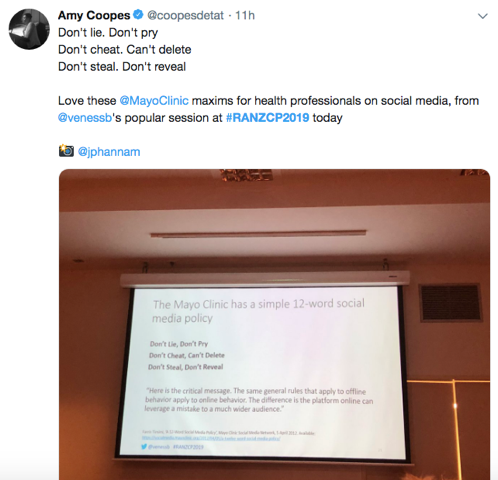 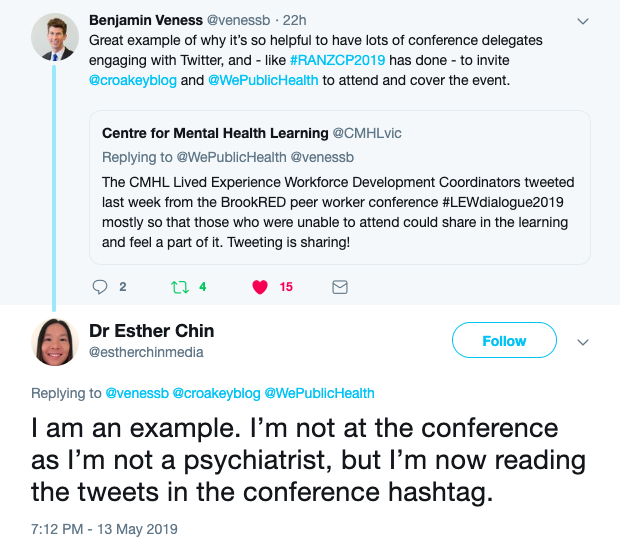 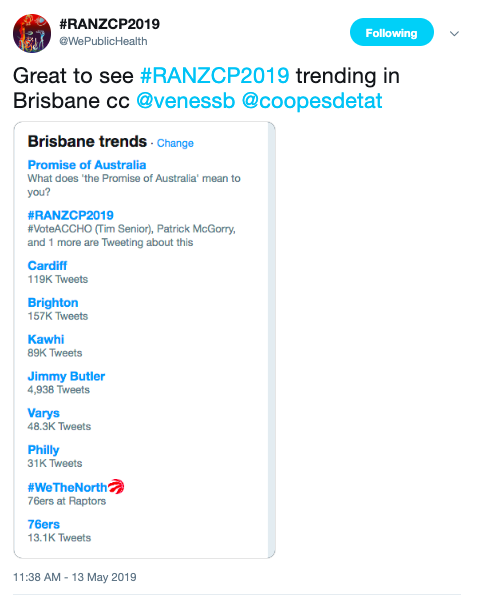 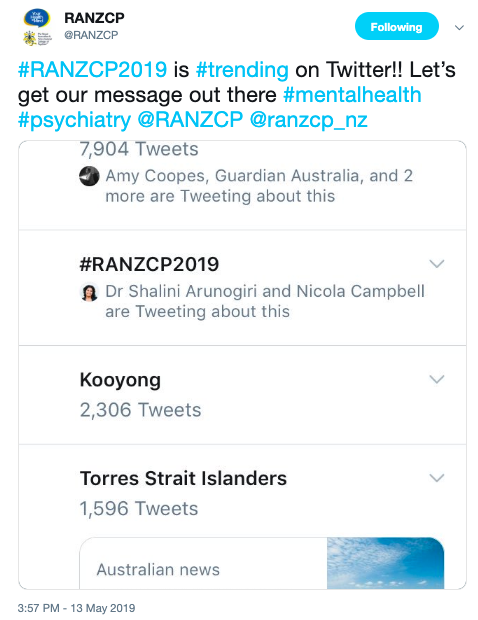 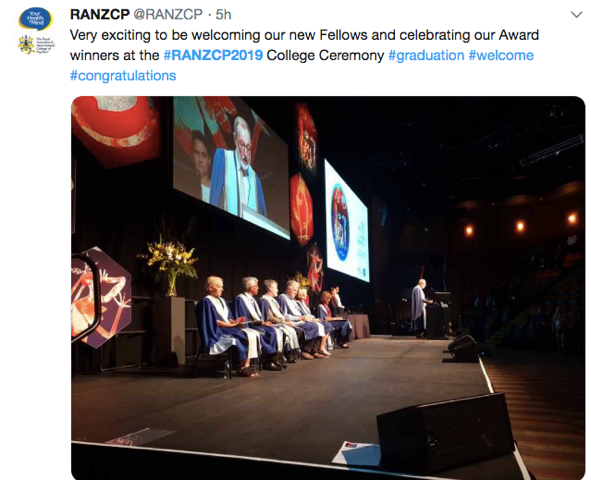 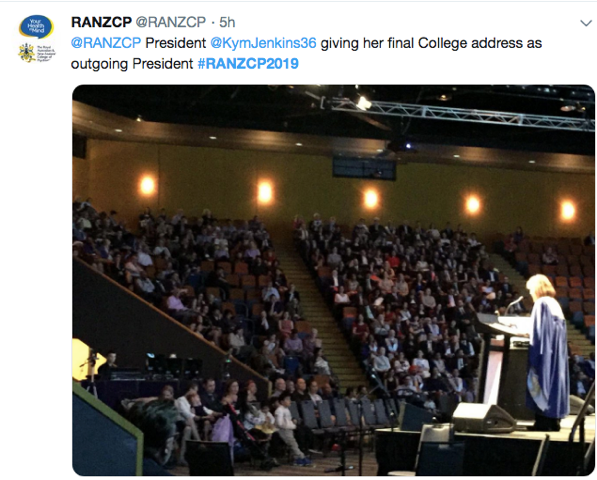 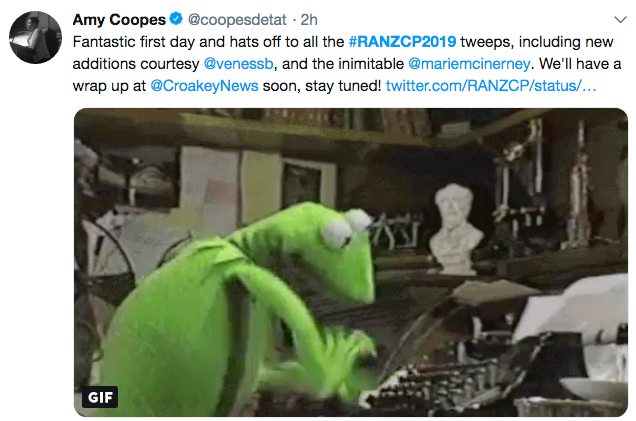 #RANZCP2019 continues in Cairns today. Our reporter @mariemcinerney is there tweeting from @wepublichealth. Bookmark this link to follow our rolling coverage of the event.