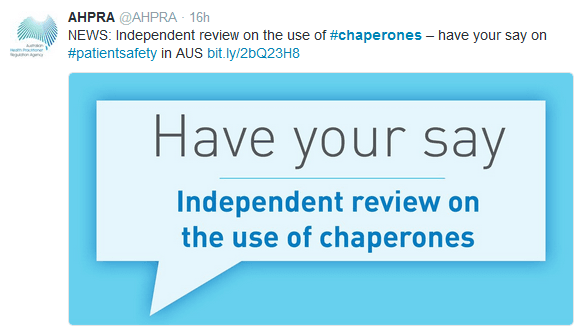 Submissions have been invited for an independent review on the use of chaperones to protect patients that has been commissioned by the Medical Board of Australia and the Australian Health Practitioner Regulation Agency (AHPRA).

The review was announced in August following revelations that Melbourne neurologist Dr Andrew Churchyard was allowed to continue practising with a chaperone, despite allegations he had molested a patient.

According to media reports, Churchyard took his own life in late July amid claims he may have assaulted more than 40 male patients.

AHPRA released this statement soon after his death, saying that as there may be a coronial investigation, it could not comment publicly in detail about the matter or his disciplinary history with the Medical Board of Australia, although it outlined a timeline of events until his registration was suspended on 11 February 2016.

The Age has reported that former Victorian Health Services Commissioner Beth Wilson wants the chaperone system to be scrapped.

Last year the Office of the Queensland Health Ombudsman also called for reform to the chaperone system after examining a case of a medical practitioner who breached chaperone conditions on more than a dozen occasions.

The review of the chaperone system is being undertaken by Professor Ron Paterson, Professor of Law at the University of Auckland and Distinguished Visiting Fellow at Melbourne Law School.

In a statement issued on Monday by AHPRA, Paterson encouraged interested parties to share the call for submissions with their networks, to ensure a wide range of submissions are received. He said:

‘This is an important review. I’m keen to hear from a range of individuals and groups about their experience and views on the use of chaperones to protect patients’.

‘As an independent reviewer, I think it’s particularly important that people with a personal experience of chaperoning, either as a patient or as a health practitioner, make a submission for me to consider as part of the review’.

AHPRA CEO Mr Martin Fletcher said that the review will inform the ways in which the Board and AHPRA can strengthen the approach to protecting patients. He said:

‘The data, experience in Australia and internationally, and research evidence which the review will consider will ensure that our approach best serves the community’.

The issue is also likely to arise at this month’s 12th International Conference on Medical Regulation being hosted by AHPRA and the MBA in Melbourne. Paterson will be a presenter at a session on ‘what does it mean to be a risk based regulator?’ Croakey’s Conference News Service will be reporting on the conference.

Paterson will report his finding and recommendations to the MBA and AHPRA by early 2017. The review report will be provided to Health Ministers and will be made publicly available.

All submissions to Paterson’s independent review must be received by close of business Monday 3 October 2016 to ChaperoneReview@nhpopc.gov.au or to: