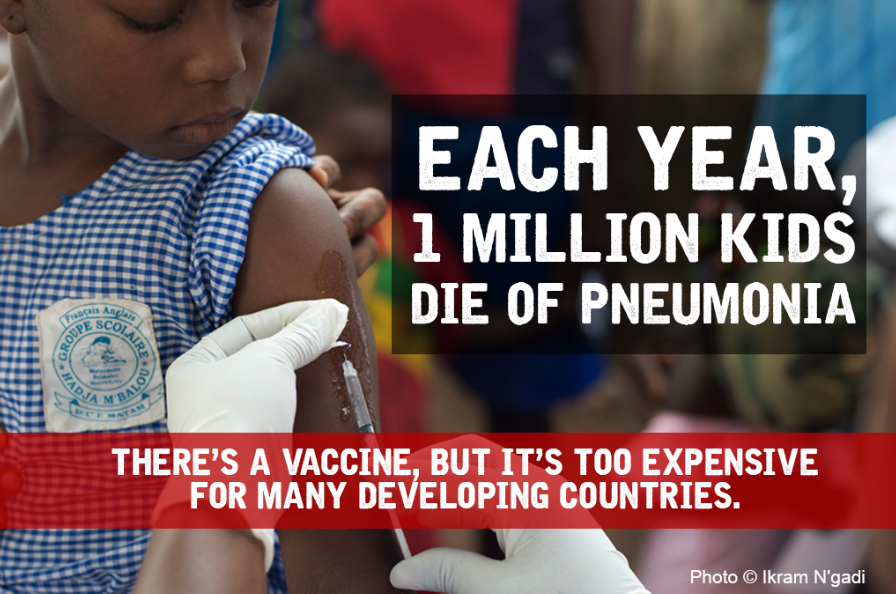 Doctors Without Borders/Médecins Sans Frontières (MSF) has launched a petition as part of its global campaign —‘A fair shot’  – calling on pharmaceutical companies GlaxoSmithKline (GSK) and Pfizer to slash the price of the pneumococcal vaccine in developing countries.

Today Australian and other representatives from around the world will meet in Geneva to assess the work of Gavi, the Global Vaccine Alliance, to which Australia has donated $250 million over the past five years.

Australia’s donation has contributed to the vaccination of over 440 million children since 2006. Yet despite this valuable contribution, many children are still dying needlessly from vaccine preventable diseases. In the case of pneumonia – the number one killer of under fives – about 70% of the world’s children are not fully vaccinated.

One of the main reasons why children remain unprotected against pneumonia is the high price of the vaccine.

Indeed, over the past four years the overpriced pneumonia vaccine chewed up almost half of Gavi’s budget, which finances vaccines for the poorest countries. It will absorb a further 30% in Gavi’s next strategic period.

With Australia already having donating $250 million and pledging a further $250 million up until 2020, the Australian Government needs to demand that Gavi stands up to big pharma and negotiates a far better price for the pneumonia vaccine.

Why is the price of pneumonia vaccine so high? Because the market is controlled by just two companies, Pfizer and Glaxo Smith Kline (GSK) who have made combined $28 billion in sales from the vaccine in the past five years.

Next year Gavi will be renegotiating with Pfizer and GSK for supply of the vaccine. In the past six years the companies have only reduced the price by a meager percent despite massive revenues already made.

Imagine how much further Australia’s donation to Gavi could go if Pfizer and GSK would offer a considerable discount, as opposed to the scanty reduction to date.

Earlier this year, 193 governments met in Geneva for the annual World Health Assembly, where they unanimously passed a landmark resolution demanding more affordable vaccines and increased transparency around vaccine prices. The governments of over 50 countries underlined the rising inequities among them caused by the increased financial burden of new vaccines, with many stating the high price of new vaccines, such as that against pneumonia.

It is time for the Australian government to turn words into action in Geneva and push Gavi to do a better job negotiating with Pfizer and GSK for more significant price reductions.

Gavi also has to put more effort into breaking Pfizer and GSK’s duopoly by supporting other manufacturers to enter the market more quickly. A producer in India, the Serum Institute, has already publically stated that they will charge US$6 per child for the vaccine when they bring it to market in several years, and they will still be making a profit.

Today’s board meeting is the best opportunity for Australia and other donors to urge Gavi to stand up to big pharma and demand they prioritise kids’ lives over profit.

PrevPreviousOut of step? reflections on the benefits of marching for climate action (& some tips & a poem from the Marshall Islands frontline)
NextGovernment not on track to meet Closing the Gap targets because of course they aren’tNext