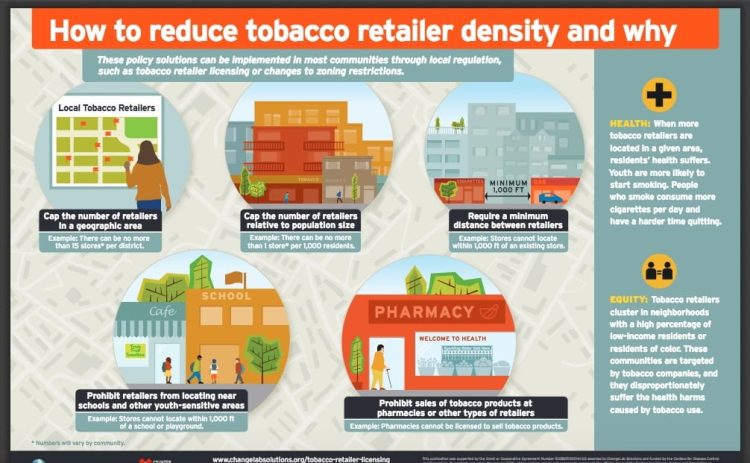 Calling for a minimum price for tobacco products, and action on retail licensing

Australia has been urged to implement a minimum tobacco price to stop manufacturers targeting lower income smokers, and to introduce strong retail licensing to cut the number of tobacco outlets, particularly near schools and in poorer communities. 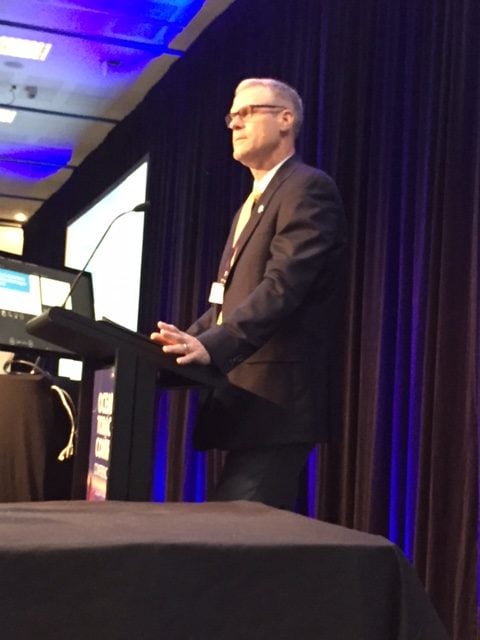 , from the School of Global Public Health at the University of North Carolina, told the Oceania Tobacco Control Conference in Hobart on Wednesday that Australia was at the cutting edge of many tobacco control efforts, not least with plain packaging.

But he said he had been surprised to discover how much it lagged on key supply side issues, which allowed tobacco companies to circumvent or undermine other tobacco control initiatives.

Australia’s high tobacco taxes had pushed up prices and in turn reduced consumption, but tobacco companies had hit back by focusing aggressively on discount brands, producing a proliferation of these brands at the very low end of the market, he said.

To counteract those strategies, he said governments should impose a floor price or minimum price, such as about $20 for a pack of 20 cigarettes.

“That way you can really reduce the disparities where low income people smoke at a higher rate than high income,” he told delegates. “It would help to reduce that gap and have an overall effect on reducing smoking”.

He was part of a recent study that compared the projected impacts of a cigarette floor price and excise tax policies on socioeconomic disparities in smoking in the United States.

He is now part of a follow up study “to test the real world impact, which we assume will match what the simulation has found,” he told Croakey.

That study will look at New York, one of the few places in the world to have introduced minimum prices. The city has also banned price discounting, “so there’s no ‘buy one, get one free’,” he said.

Ribisl conceded that a minimum price, unlike tobacco taxes, had one disadvantage in that it can increase profits for the tobacco industry – a “small side effect” that had caused some in the tobacco control sector to oppose the move in the past.

But he urged delegates to keep their eyes on the public health goal of reducing tobacco consumption, amid long established evidence that price increases are the most effective tool to discourage smoking, with each 10 per cent price rise generating a four per cent reduction in smokers.

“We get fewer kids smoking, more people who smoke quit, and also the people who continue to smoke, smoker fewer,” he said. 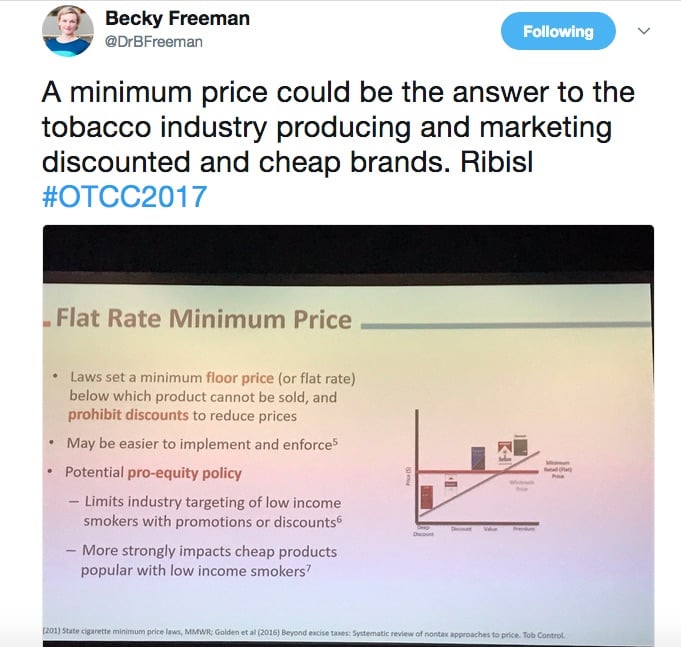 Ribisl said Australia’s weak tobacco retail licensing laws had been “one of the bigger surprises on my trip here”.

“In so many areas you are so ahead of the rest of the world, with plain packaging, strong pictorial warnings, high taxes, but (that’s) an area you’re really falling behind in,” he said, noting that it was a very strong and popular area of regulation in the United States.

Scott Walsberger, from Cancer Council NSW and who chaired the session addressed by Ribisl, wrote recently that licensing of tobacco outlets is the most commonly advocated measure in Australia for reducing tobacco availability.

But currently, he said, New South Wales only has a notification scheme in place – whereby tobacco retailers simply need to let the government know that they sell cigarettes.

He said an immediate benefit of licensing was that it persuaded some operators, who did not want to pay fees or comply with regulations, to stop selling tobacco.

But there was also the opportunity for “add-ons”, built in regulations such as banning outlets from selling tobacco if they were within one kilometre of a school, stopping them from selling particular products such as menthol cigarettes, or refusing a licence if they were too close to another tobacco outlet.

“There are a whole series of reasons why greater retail density is bad,” he said. “If you live with 250 metres (of a tobacco outlet), you’re more likely to relapse.”

Other studies have shown that children are more likely to smoke when there is greater retail density near schools.

He recommended five ways to reduce the density and number of tobacco outlets, based on this research into how US communities can take action through legal and policy approaches.

“We don’t allow strip bars, gun shops or lead smelting plants near schools… but we do freely allow most jurisdictions to sell tobacco near schools,” he said. 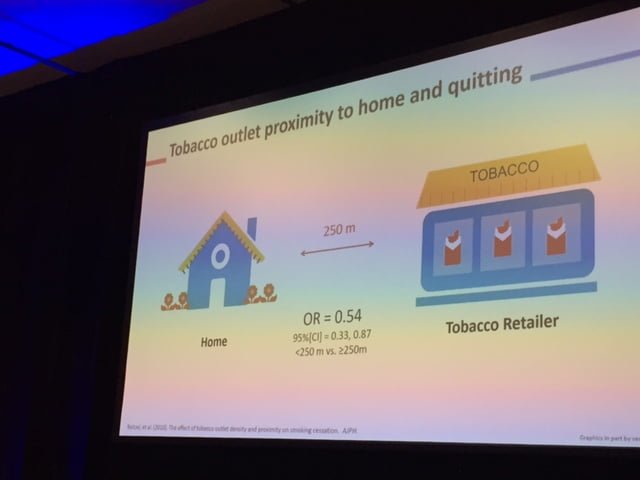 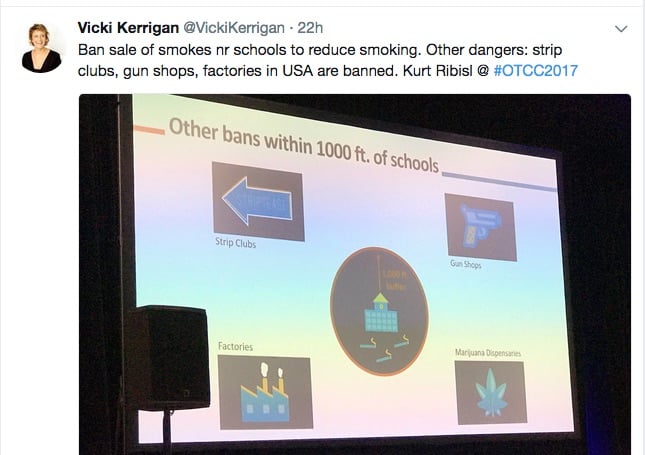 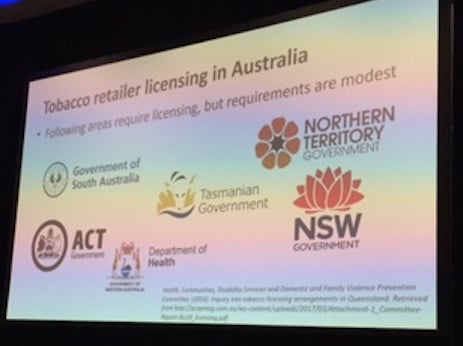 Organisers of the conference described supply side issues as the “hot topic” for policy makers, as a number of the concurrent presentations detailed.

One study looking at bars, pubs and clubs in New South Wales and their views on selling tobacco suggested that industry resistance to restrictions on tobacco sales in licensed premises may be less than anticipated, the authors said.

“When asked their reaction if cigarette sales were banned in licensed outlets, direct concerns about lost profit were raised by less than 10 per cent, reinforcing other evidence that the profit from cigarette sales is low for many retailers,” Burton said.

Overwhelmingly, she said, they could imagine not selling cigarettes and more than 20 per cent said they expected a ban within five years.

But a study of convenience stories, or dairies, in New Zealand showed that it might be different for such outlets where tobacco may not be a great profit winner but is seen to contribute significantly to turnover and, importantly, dictate whether a customer uses one particular store over another if they need cigarettes.

Martin Witt, from the Cancer Society in Canterbury and West Coast said the majority of owners and manager of stores involved in face to face interviews saw tobacco as important to their livelihood and were “either ‘OK’ about selling tobacco or gave little thought to its sale”, although security concerns were an issue.

But another New Zealand study raised some of the tensions involved for retailers, who want to protect their business interests, but may have had their own losses through smoking related cancer, worried about exposure of children to tobacco, or could see the impact that tobacco consumption had on poverty.

Lindsay Roberston, a Research Fellow at the University of Otago, led the study into how New Zealand tobacco retailers view measures to regulate tobacco retail availability, including mandatory licensing.

The responses were mixed: from “just a money grabbing tax” to “as long as there’s a good reason”. Some welcomed the general idea of reducing retail availability, seeing it like necessary alcohol restrictions, while others emphasised personal responsibly and “shunned ‘nanny state’ interventions”.

Robertson said interesting responses came when the researchers probed more specific policy options, such as restricting the sale of tobacco around schools.

“About half either supported or accepted the idea of restrictions around schools, suggesting where, if the rationale is clear and includes protecting children, retailers are more likely to support regulation,” she said.

This helped to identify the policy approaches that could be seen as more acceptable for tobacco retailers, she said.

“Many retailers don’t like tobacco, don’t like selling it, but feel they have to (for business reasons,” she said. “That opens the possibility for regulation.”

The New Zealand SmokeFree 2025 initiative (which the conference has been told has lost momentum – more on that in forthcoming story), is encouraging Tobacco Free Retailers, arguing that tobacco is more available in our communities than bread and milk even though it kills half the people that use it regularly (see its toolkit to help communities talk retailers into signing up). 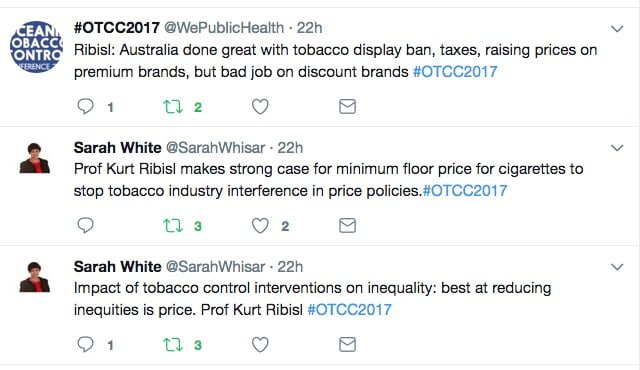 The feature image, How to reduce tobacco retailer density and why, is available here.