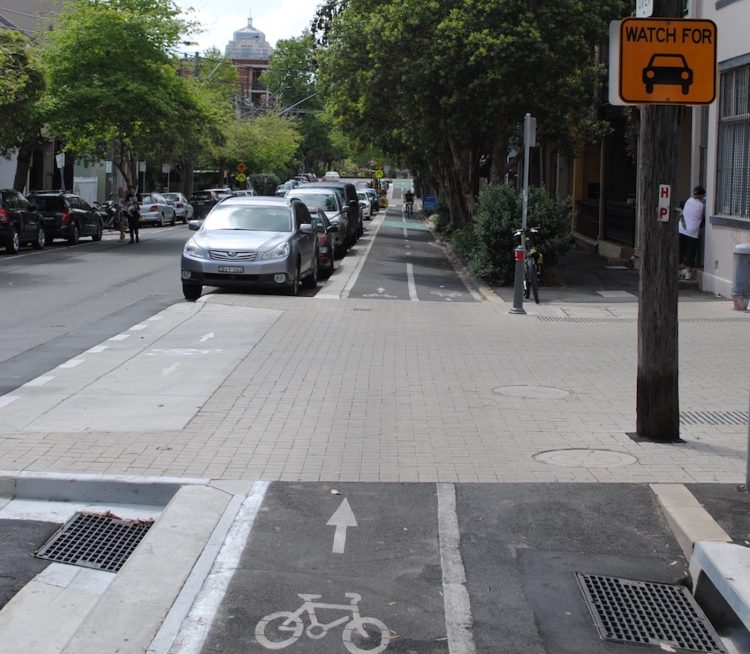 It’s time to end our unhealthy, costly love affair with cars and learn from the example of countries such as the Netherlands, according to University of Sydney researchers James Kite and Dr Melanie Crane.

One of us was having dinner with some friends recently when a friend (let’s call him ‘Barry’) started complaining about a new bike path that had been installed on his inner Sydney street.

It’s fair to say that this response was not the one Barry expected: “Why should parking be given precedence over safe cycling routes?”

And so began a 45-minute argument about the relative merits of cycling as a viable form of transport.

It was a frustrating discussion, with all of the usual myths about cycling and cycle paths trotted out to justify Barry’s objection to the bike path.

But what inspired us to write this piece was a statement by Barry that we found illuminating:

I have the right to be able to park in front of my house.”

This fourteen-word statement captures the essence of his objection to the bike path; namely, that the needs of private cars should take precedence over all other forms of transport. Of course, Barry does not have the right to park on public land in front of his house; what he has is the expectation.

As keen cyclists, we see this expectation play out in negative ways all too frequently.

Whether it is overt, like drivers cutting us off or yelling abuse, or subtle, like sections of bike or shared paths that require cyclists to dismount.

In both cases, the needs of car users and private cars especially, are placed above those of cyclists, pedestrians, and other travellers.

We don’t blame Barry for having this expectation. Like so many social norms, it has become an unconscious bias that many people, including those in government, simply cannot see.

Barry’s not alone in holding it, either: studies have shown that this bias is commonly-held and that it’s a problem.

When we put cars first, we put our health and the environment at greater risk and we see effects like the dehumanisation of cyclists, which contributes to acts of aggression towards cyclists.

It’s also costly, both for individual households and governments.

We need to challenge this expectation, and that means getting people out of cars and onto bikes (and their feet).

However, such infrastructure and policies require political will, something that is largely lacking in Australia.

In the last few years in New South Wales, for example, the state government oversaw a massive increase in the size of fines for cyclists and obstructed the City of Sydney’s efforts to build an integrated cycling network, including by ripping up a separated cycleway on one of Sydney’s busiest cycling routes to make room for more vehicles.

Government spending on cycling infrastructure is a minute part of the transport budget and a far cry behind what is spent by other cities.

In this environment, you could be forgiven for thinking this is an intractable problem. But there is evidence it is possible to change this social norm.

Doing so will require changing the social and political approach we take to transport. For this, we can look to the experience of the Netherlands, now one of the most cycling-friendly nations on Earth.

It was not always so, however; after the Second World War, car ownership increased dramatically across the Netherlands, and city streets were transformed to (attempt to) accommodate the demands of the car.

This led to congestion and an increased road toll and, in the 1970s, mass protests coincided with the oil crisis to create the perfect conditions for a change in transport priorities.

The national and municipal governments consequently committed to a massive increase in cycling infrastructure, to the point where Amsterdam has now committed to the removal of more than 11,000 parking spaces from its city streets by 2025, to be replaced by cycling and walking infrastructure.

More recently, other cities are making headway towards changing their mobility preferences, including removing freeways and investing heavily into sustainable transport modalities.

In Australia, however, we are continuing to preserve the image of the car as the dominant form of transport, such as with the latest amount of investment in the Westconnex motorway.

Weaning away from the car may seem unthinkable in Australia’s backyard discussions. But our situation is not as distant from the conditions in the Netherlands in the 1970s as it might seem at first.

The road toll remains unsettlingly high, while the costs of congestion to the economy continue to climb.

At the same time, the threat of climate change, the impacts of which we are already feeling, mean that we must find ways to reduce our dependence on fossil fuels with the utmost urgency. Reducing urban car use would contribute significantly to that goal.

Advocates for multi-modal transport options, including cycling, need to be vocal and constant if we are to achieve a shift in transport priorities.

It can be done, as the Netherlands has shown us, but this means challenging the ‘car is king’ attitude that underpins so much of our transport planning.

Notably, we are already seeing a positive shift, with young people’s transport preferences changing and a consequent decline in the proportion who get a driver’s license.

We hope that the rest of us can divorce ourselves from our unhealthy love affair with the car that has pervaded the last 70 years.

If we can continue this shift, then who knows what can be achieved? It’s even possible that Barry would use that cycle path.