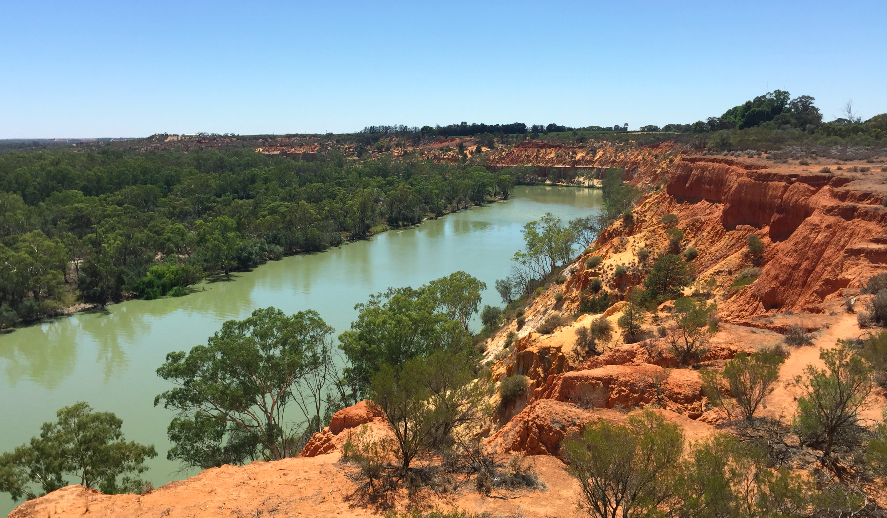 Calling for an historic Green New Deal and climate justice

Introduction by Croakey: Paul Dutton, from the Barkindji Nation, was a tireless and valuable voice across all the discussions in Tuesday’s #CoveringClimateNow Twitter festival, with many strong calls for action, including for a Green New Deal in the next Australian budget to invest in climate justice.

Dutton, who has also been a contributor (including of beautiful artwork) to Croakey’s #JustJustice and #JustClimate projects, highlighted environmental devastation across many communities in Australia and urged practical, political and philosophical change to protect our planet.

Below is a selection of his tweets and suggestions, and some interactions across more than five hours of tweeting, which saw the #CoveringClimateNow hashtag trend across Australia. 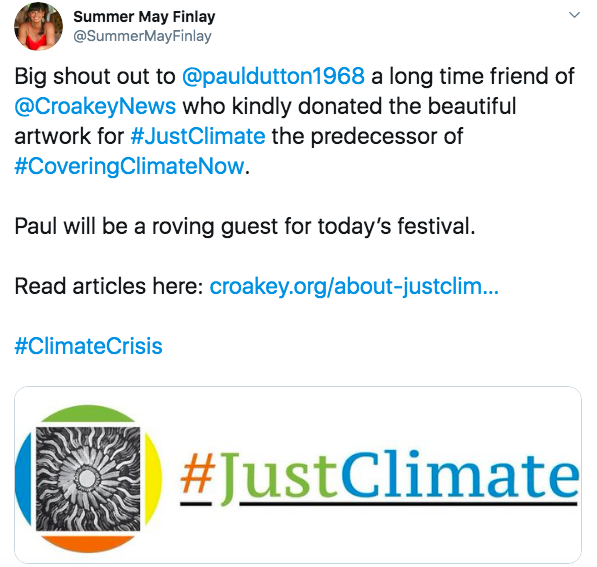 What Aboriginal Lands are we living on? Which Country is important to us that we must fight for to ensure our children have a future, their children have the upbringing & childhoods we enjoyed?

Now is the moment, today, for world leaders to listen to those who vote them into office.

This isn’t another reason to fob off the serious need of a massive need to change the capitalist greed of too many people of power. Climate Action Now to implement the changes to keep under 2°c.

Always remember Aboriginal nations have understood the needs of Mother Earth, protected her, our environment, ecosystems, our own existences through how we capture food, grow food, travel and love. 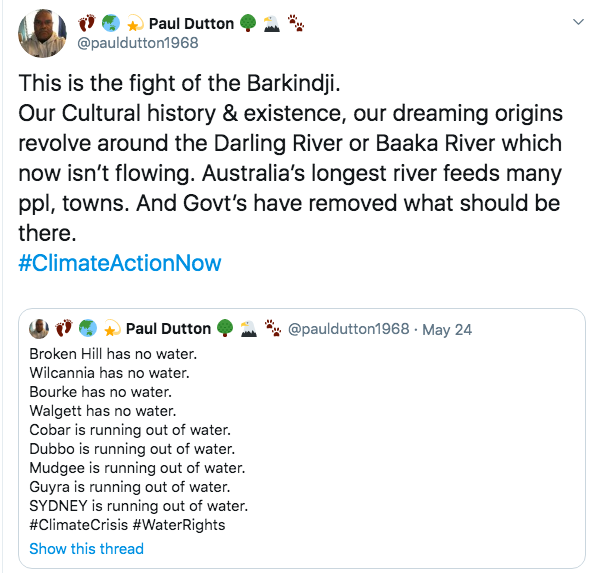 It is time we stand up together and fight for Climate Action Now. Everyone must come together to ensure small communities like Wilcannia, Walgett, Brewarrina, Mildura, and everywhere else has water rights and cultural water rights to ensure our future existence includes fresh water.

The abuses of Water Rights which is happening right now in Australia through corporate misuse of river systems must come to an end. Water should never be used for profit. 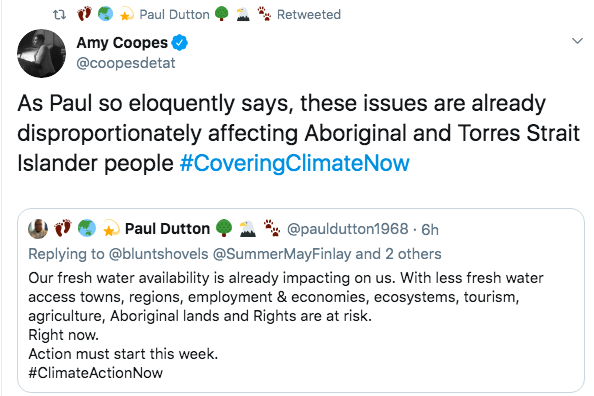 What actions do we as Australians want from Prime Minister @ScottMorrisonMP to act on this year to address the dangers of climate change?

We must come together to force change that he and our Parliament continue to ignore. We must force change. What do we want?

We should be engaging in Climate Action Now, having a say. Twitter has a massive pull. When everyone fights for the same thing, changes do occur. Don’t listen to governments and media, they want to control what’s happening. Have your say, this is our day. Force change. 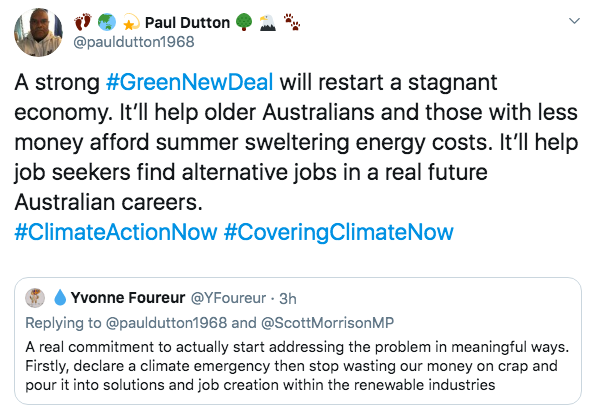 Today we must make Australia’s Prime Minister change his views and behaviours. He must act for all Australians, not just the rich. Make our voices heard. Demand a Green New Deal infrastructural plan.What ideas and renewable energy options here now?

An holistic Green New Deal must be implemented in Australia’s 2020/2021 budget which must have generational advances. Australia cannot have a three-year plan. Election term policies must be a thing of the past. This must include a minimum eight percent Budget spend.

Farmers are supported with droughts. Everyone should be supported to address Climate Action Now just as we were with Pink Bats and Solar Panels.

Be part of the five

Today we can be a part of that change. We can be the five percent that forced a better future.

Remember there are families, our families who deserve the childhoods and freedoms we have experienced.

How many times have LNP Government looked down their noses at Australia’s needs, and flat refused change, then backtracked when our combined voices have even made media hear us roar!

Never be afraid of being a single voice in a crowd of voices. A crowd voice becomes a stadium roar. 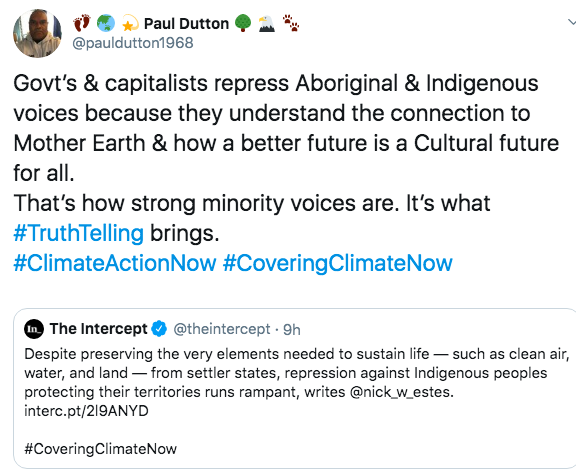 We are not alone. Our fight isn’t just national. We all must come together. We are coming together.

Our diversity is what’s special is what we are, deserves to be protected and helps develop our future.

If we are on social media space, we can spread any message. One person picks up our story, our voices it will multiply, it encourages others, helps people see what’s happening. Life, media, modernisation clutters signs and facts. Spread the truth.

Sciences and facts. Help deliver a better future especially in #ClimateActionNow by allowing everyone to see the truth and environmental impacts that we are experiencing and will experience. This is why Governments de-fund the truth of science.

Australians must demand that its media must represent the truth on #ClimateActionNow and stop ignoring or playing it down against the wishes of capitalists who fail to deliver innovation to protect our climate.

How relevant are Australia’s news media if they’re ignoring Climate Action Now and paying only lip service to the UN Climate Summit?

Australian voices on Climate Action Now are strong and important. Continue to fight ineffective governments like that led by Prime Minister @ScottMorrisonMP until he fears what we are as a movement demanding.

That’s why a strong listening government is what all Australian voters must consider at future elections.

Our votes count. Less majority parties in Goverment means they have to act, instead of protecting the capitalist status quo.

Denying and refusing #ClimateActionNow IS a crime against humanity!

The nation needs to force Governments to stop how they are funded. Big business political donations are harming the nations future. We must vote for change to have a realistic chance for long term 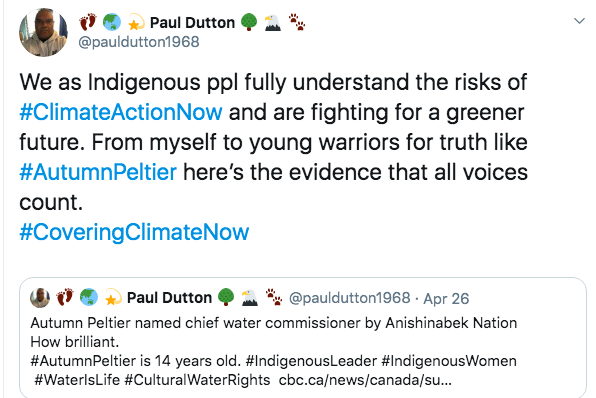 Changes we can make now

We cannot afford to isolate and doom our children or grandchildren.We already know the impacts with beach degradation happening on Sydney beaches. Multiple bush fires in winter.

Why isn’t there a push for green housing for residential and business building development? There should be – including water capture, carbon minimising. Innovate technologies for water use, weather protections, roofing, flooring and materials.

Australia has lost its car industry through inaction by government; we now must push for a strong, new, innovative change to electrical transport options. End diesel and petrol car industry.

We’ve heard calls for a review of the curriculum because of NAPLAN results. That change must encompass a stronger focus on #ClimateActionNow in subjects, ideas and the future, by our future leaders.

The western world has forgotten how to recycle. Time to recycle everything. Metals. Cement. Plastics. Wood. Glass. Green scraps. There are already technologies for future use. These should be the subsidies of the future, not mining.The world must look at how recycling occurs. Burial and storing is not the answer.

Governments can listen and make changes to all building codes, regulations and legislation. To do so, will build efficient practices, help environment and hopefully lower standard living costs for everyone.

The Pacific Nations need our support. A Green New Deal should also have a long term plan for island protections, evacuations and Climate Refugee Conventions.

Effective International Trade Agreements should include how trading partners address #ClimateActionNow, instead of complaining about countries not doing anything, build it into international economic plans.

Erosion will cause greater crop losses. Especially with less rainfall. We must protect crops and ecosystems by ending land clearing practices. Again, we should demand this within our COAG funding in Australia and within International Trade Agreements.

Government in Australia is always talking about efficiency dividends. This must include how Government Departments proactively address #ClimateActionNow within and promote outside their agencies, to other Departments, customers and in promotion of service.

Time to question @ScottMorrisonMP on when the budget surplus will be used to commence #ClimateActionNow. No point on a surplus if Australians can’t live in uninhabitable parts of the nation because of government inaction on the climate crisis. 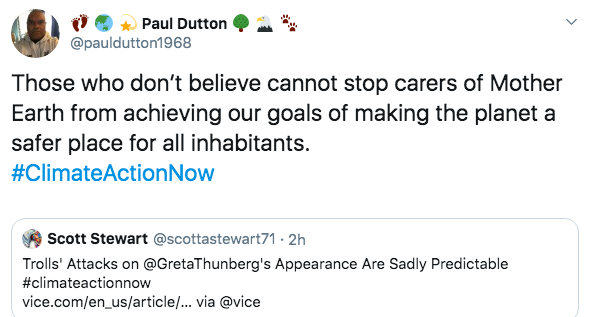 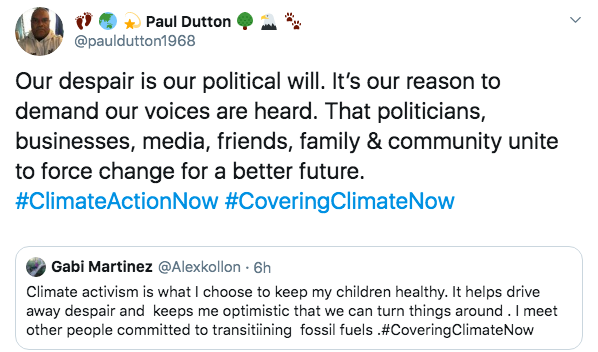 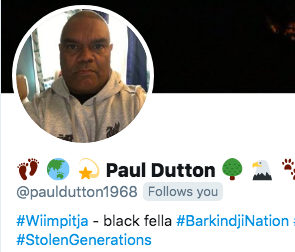