Calling for health reform – that won’t be a health hazard 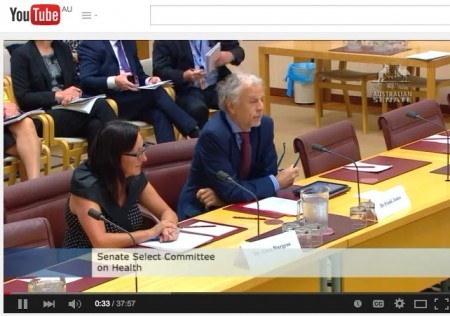 Dr Frank Jones, a GP from Mandurah in WA and president of the Royal Australian College of GPs, is worth watching in this presentation made yesterday to the Senate Select Committee inquiring into federal health policy.

When asked, what is the one thing he would tell a new PM (if this eventuates), he replied:

Such a simple message and yet it seems to be so very difficult for this Government to hear it, understand it, and act upon it (although clearly some of its own MPs have “got it”, as per the tweet below):

The latest Productivity Commission report on health services shows the need to improve access to and quality of primary health care, rather than heading in the opposite direction, as do a stream of articles from experts (for more details on these and the PC report, see the bottom of this post).

Meanwhile, in the run-up to this year’s general election in the UK, a new report from the Health Foundation says that for politicians’ health proposals to have any credibility, they must pass three tests:

(It seems to Croakey that the list would benefit from a fourth criteria: whether policies exacerbate or reduce health inequalities.)

Perhaps the current Australian Government may be more inclined to look to the US for inspiration, however, given their evident preference for private over public sector health services.

In the article below, a health policy researcher, Dr Paul Burgess, suggests several areas where Australia might learn from recent health reforms in the US.

Burgess is Australia’s 2014-15 Commonwealth Fund Harkness Fellow in Health Care Policy and Practice, and is based at the MacColl Institute for Health Care Innovation, Group Health Research Institute in Seattle, USA.

Looking to the US to solve Australia’s Medicare dilemmas

Australia’s Medicare needs reform – on this, at least, there is widespread consensus. However, as the old joke goes – put four health professionals (or policy wonks) in a room and you’ll get at least six opinions on what direction to take.

While most health commentators refer to the US in terms of pitfalls to avoid, several significant health reforms emerging from Affordable Care Act (AKA Obamacare), in particular the creation of the Centre for Medicare and Medicaid Innovation (CMMI), offer guidance for an evidence-based solution to Australia’s Medicare machinations.

Australia has experienced a transition in the causes of ill health but Medicare has not evolved to keep pace. In the era of infectious diseases, the Medicare model (fee for service) that rewards the volume of patients seen made sense.

Today’s paradigm of ‘lifestyle’ or chronic diseases such as obesity, diabetes and depression require a multi-disciplinary team approach and a focus on high quality care over long periods of time. Many of these new ‘patient touches’ fall outside Medicare’s current reimbursement remit.

For Australia to maintain its global reputation as an efficient and high performing health system we will need to change the way we finance health care.

In particular, we must create incentives and develop systems for primary care to proactively manage health at a population level (health promotion, early detection and intervention for chronic diseases) in addition to demand-driven face to face encounters.

As mentioned previously, policy options are profligate. These include incentivising Australian GPs to transform their practices into patient centred medical homes (reorient their practices around patient needs), task shifting roles from GPs to other team members and pursuing a UK-style Capitation and Pay for Performance.

The problems are healthcare financing in Australia has traditionally provided little flexibility for regional service innovation and concordantly, there is the potential for unintended consequences in Australia’s diverse primary care settings.

For example, a poorly designed pay for performance scheme could exacerbate Australia’s GP distribution problem as providers seek the bonuses more easily obtained in affluent populations than in disadvantaged communities.

I think a more nuanced way forward is possible and in this regard CMMI (the Centre for Medicare and Medicaid Innovation) is a model to consider.

CMMI’s purpose is to support pilots of innovative payment and health delivery models that are aimed at improving the quality of care and reducing health costs. Through competitive grant funding, big ideas (with big budgets attached) are tested and evaluated by US health providers partnering with health service researchers.

A signature CMMI reform piece is the Accountable Care Organisation (ACO). ACOs are in most instances provider-led organisations combining a network of GP practices, specialists and hospitals that are collectively accountable for a regional population across the entire continuum of care within a global budget.

Through improvements to the quality and integration of care, total per capita costs are reduced (predominantly through less emergency department use and reduced hospital admissions) and the ‘savings’ are shared between providers and funders of health care. In an ACO, everybody has a stake in improved patient outcomes and the initial results have been encouraging.

The point here is not necessarily to recreate ACOs in the Australian health landscape, but to recognise the pivotal role played by a healthcare innovation agency in empowering regional provider networks to develop appropriate solutions – including alternative health financing models.

This has appeal because solutions applied in an Aboriginal community in Arnhem Land can and arguably should be different to those implemented in western Sydney.

Health financing reform is tough politics and the recent attempts to foist GP co-payments on the Australian public have been described as poorly conceived and poorly executed. The policy formation and ensuing debate could only have been improved by having a pertinent evidence base to refer to.

If Australia is to have a 20 billion dollar medical research fund, earmarking funds to establish a Medicare innovation agency would be a strategic investment aligning with the McKeown review recommendations.

Australia has undertaken significant health reforms in recent years establishing local hospital networks, lead clinician groups and primary health networks. To align these initiatives and to realise their full potential in restraining health expenditure and improving patient outcomes will require setting the right policy and incentive frameworks with regional flexibility. To this end, there is plenty to learn from the US experience.

• Dr Paul Burgess is Australia’s 2014-15 Commonwealth Fund Harkness Fellow in Health Care Policy and Practice. He is based at the MacColl Institute for Health Care Innovation, Group Health Research Institute in Seattle, USA. Paul and other international Health Policy fellows blog at http://harknessonthewestcoast.org/

• Why the Government would have us pay more for poorer health: at The Conversation
John Attia, Professor of Medicine and Clinical Epidemiology at University of Newcastle, and John Duggan, Conjoint Professor at University of Newcastle, say there is a large body of evidence showing user-pays health systems are not great for health. They bust four myths about market-based health systems:

Medicare rebate cuts could cost patients: At The Conversation
Stephen Duckett says patients will be left out of pocket by the Government’s plans for a $5 cut to GP funding for each service a GP performs for patients who are over 15 and don’t have a concession card, and for a freeze on Medicare rebates until 2018. Non-concession patients may end up paying a A$30 co-payment, not a A$5 one, he says.

Co-payments for health care: what is their real cost? At the journal, Australian Health Review

This article, by several health policy experts and researchers, based upon a submission to the Senate inquiry,  says there is:

“a growing body of evidence highlighting the substantial economic burden faced by individuals and families as a result of out-of-pocket costs for health care and their flow-on effects on healthcare access, outcomes and long-term healthcare costs. It is argued that a compulsory minimum co-payment for GP consultations will exacerbate these burdens and significantly undermine the tenets of universal access in Medicare. Alternative recommendations are provided that may help harness unsustainable health spending while promoting an equitable and fair health system.”

And here are a few relevant extracts from the Productivity Commission report. 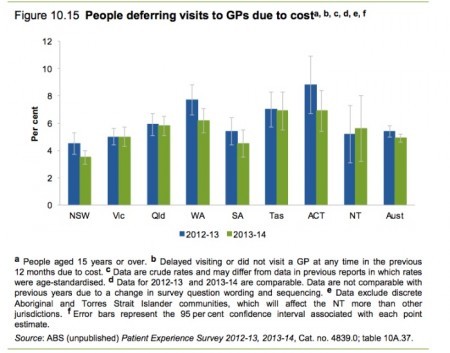 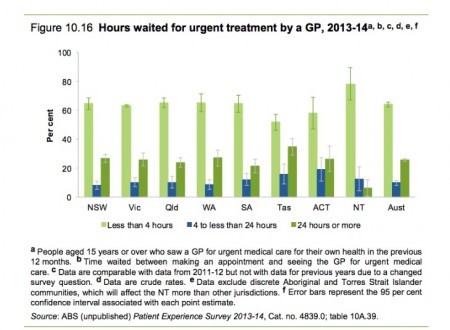 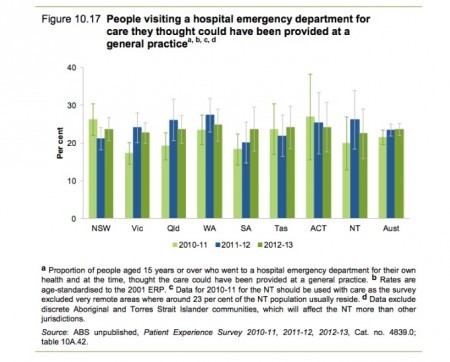 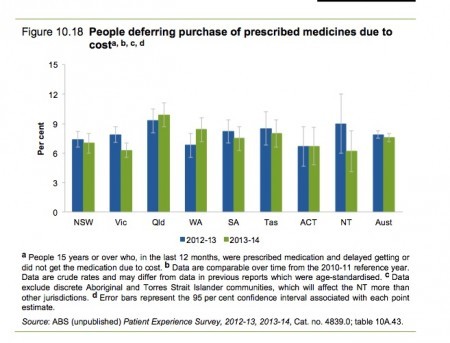 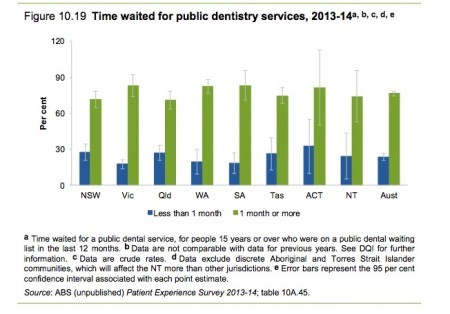