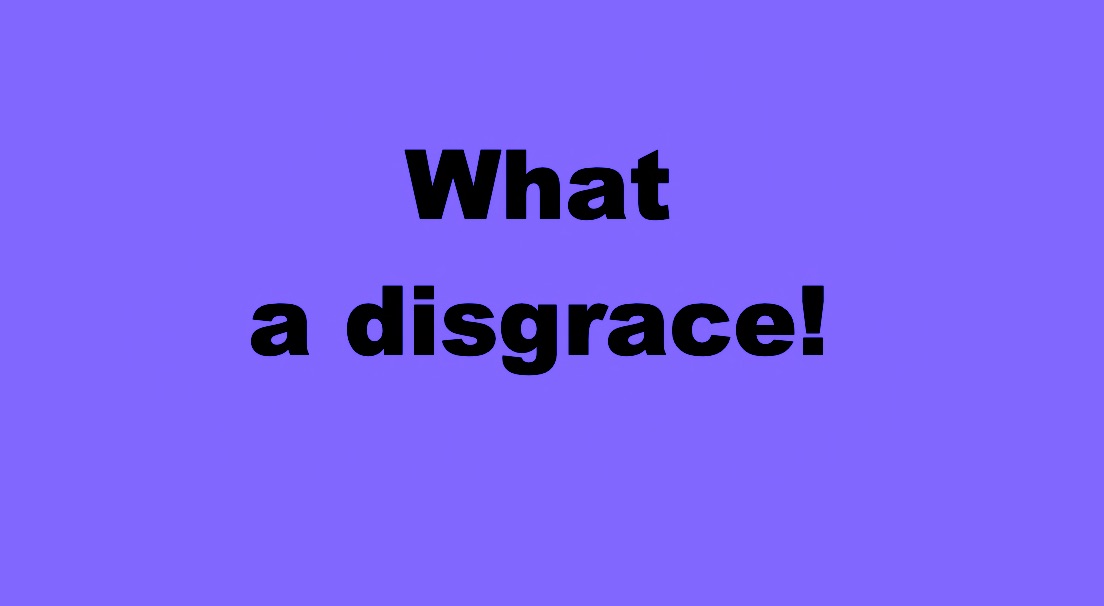 Health and community leaders have shown solidarity and support for the Victorian community health organisation cohealth after its workers suffered physical and verbal abuse in Melbourne during a week marked by violent protests against pandemic control measures.

The North Western Melbourne Primary Health Network described the attacks as “completely reprehensible”; ACOSS said they were “deeply concerning”; and others described the actions as disgraceful and expressed warm support for cohealth, which announced the temporary closure of some services providing vaccination and support for people who are homeless.

In a sign of the fraught operating environment for health practitioners, cohealth was a signatory to a joint statement from health and medical organisations and leaders earlier this week, that voiced serious concern at “threats, intimidation and harassment aimed at TGA [Therapeutic Goods Administration] leadership and staff”.

Some of the threats were later confirmed by PHAA CEO Terry Slevin as “death threats”, who told Croakey there was “a disturbing trend” where health officials – not just at the TGA – were being harassed and abused by the public for their role in the pandemic response.

It is clear that these worrying developments require a far more systematic response than simply more police on the streets.

See below for today’s statement from cohealth chief executive Nicole Bartholomeusz, and also some of the responses from Twitter. 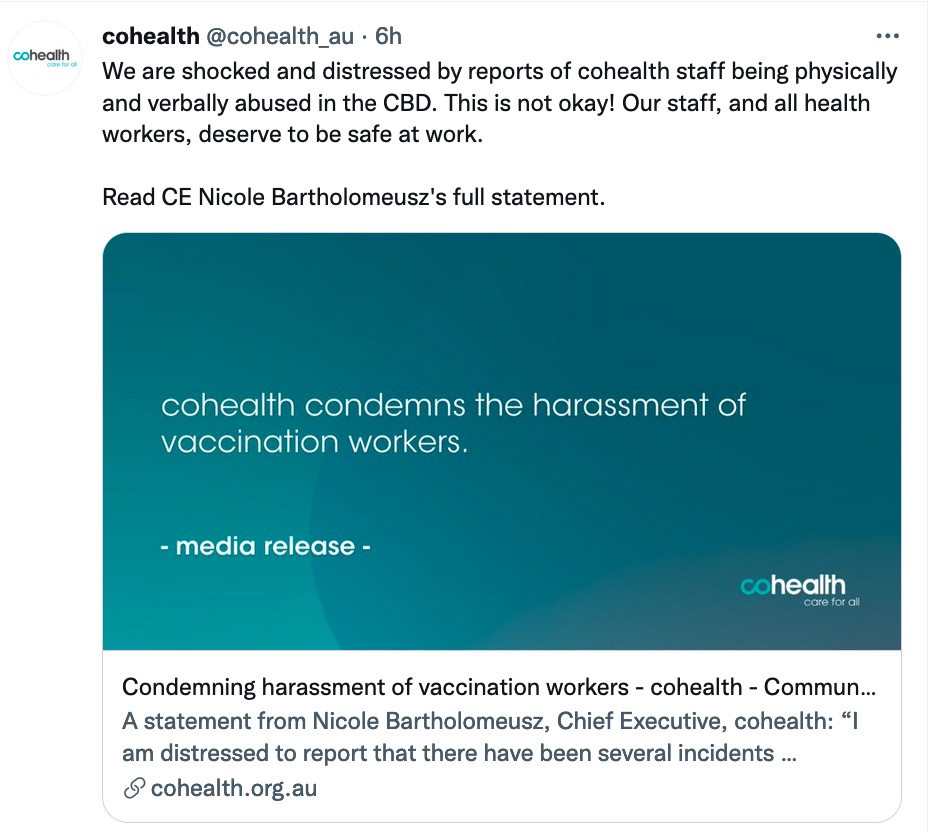 I am distressed to report that there have been several incidents of cohealth health workers in the city being physically and verbally abused while on their way to work, targeted because they were wearing their cohealth identification.

Due to the increasingly violent and unpredictable nature of the protests in the city, we have made the difficult decision to close the cohealth Melbourne Town Hall vaccination Centre as well as our Central City homelessness service, and our street based outreach services until Monday.

This means people experiencing homelessness can no longer access vital services and supports at Central City and at least 200 people per day will no longer be able to access the vaccine from the Melbourne Town Hall.

The cohealth Melbourne Town Hall vaccination Centre was opened as a safe place for people to come to get vaccinated if they are facing disadvantage, so shutting the doors is a very difficult decision.

We have also instructed all staff not to wear their cohealth uniforms, lanyards or scrubs in the city, to avoid being targeted. We give this instruction with the heaviest of hearts, as our staff are so proud to be part of an organisation that supports our most vulnerable citizens and are proud to be recognised as cohealth workers.

Our staff, and all health workers, deserve to be safe at work. I am shocked at the treatment of people who deserve nothing but our utmost gratitude and praise for working throughout the pandemic to ensure everyone gets the support and healthcare they need.

We condemn all acts of harassment and violence and stand in steadfast support of all Victorian health workers. We are currently working with the affected staff member to ensure they get the support they need.”

We urge the Victorian community to give their fullest support and compassion to all health workers at this time. 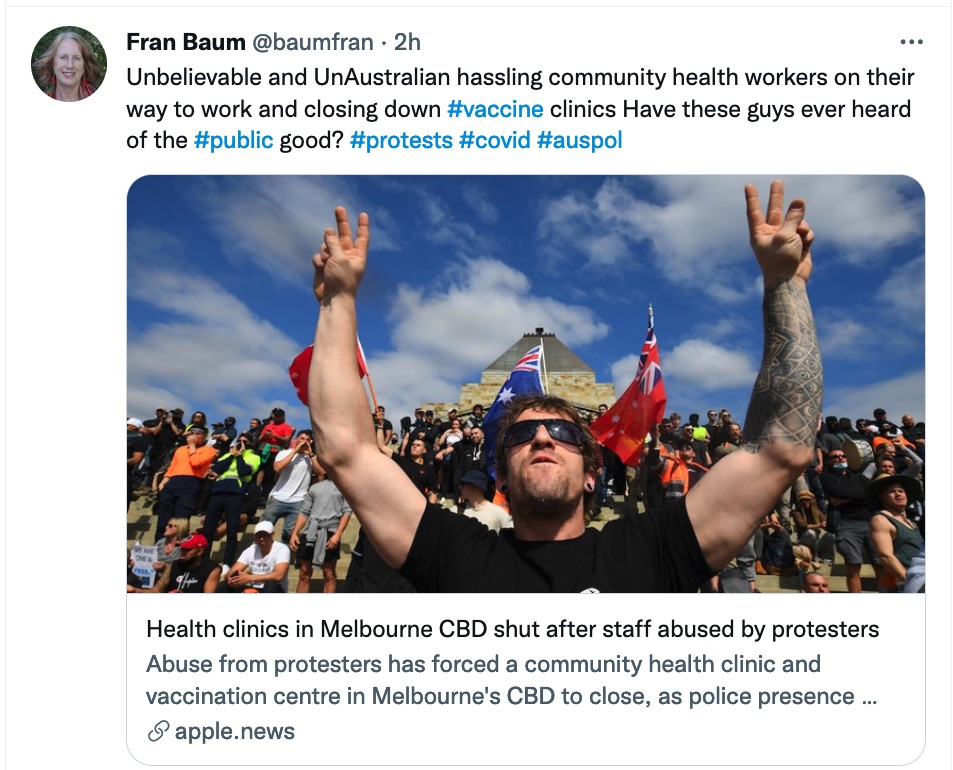 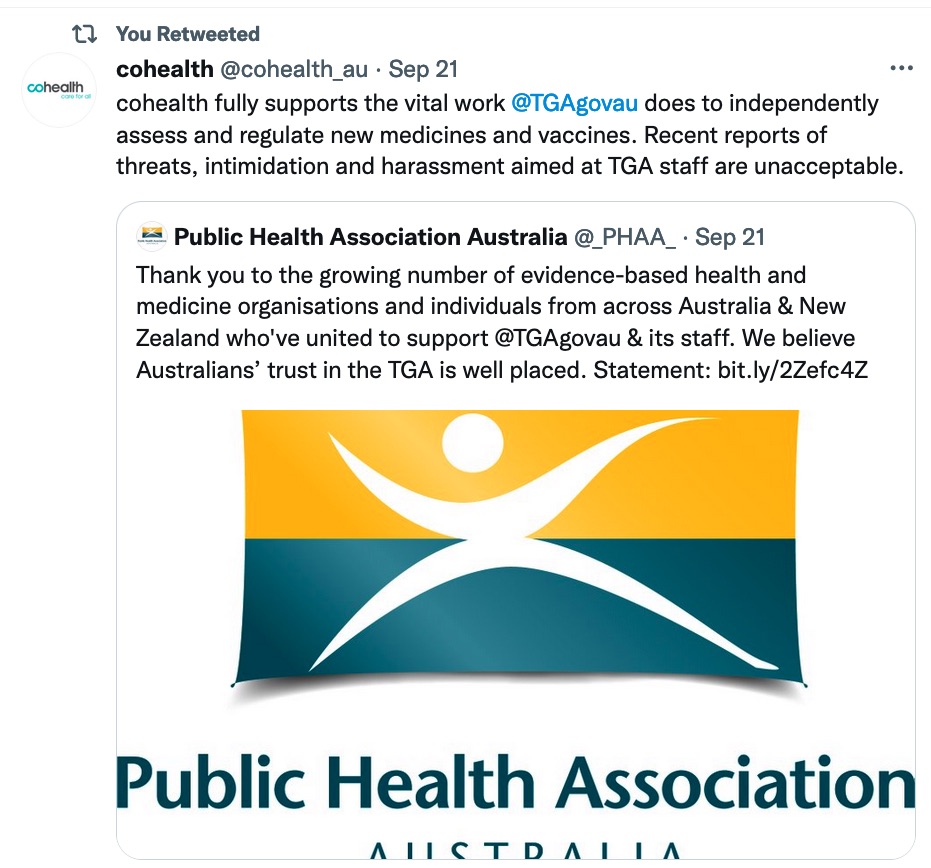 Declaration: cohealth is a premium sponsor of Croakey Health Media.

See our extensive archive of stories on public health.

PrevPreviousTailoring messaging to faith groups
NextCOVID SNAPS: on covidiots, the high price of “freedom” and liminalityNext