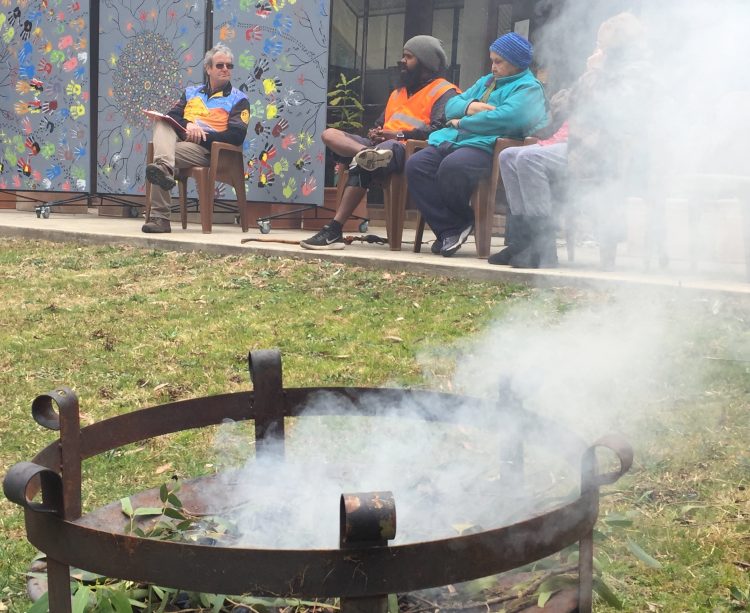 Calling for support for Clinton Pryor’s walk for justice: Canberra on Sunday

After leaving Perth almost a year ago, 27-year-old Clinton Pryor, a Wajuk, Balardung, Kija and Yulparitja man, is on the final stages of an epic walk for justice to Canberra, where a rally of support will be held from 11am on Sunday.

There are many reasons for people to join the walk for justice in Canberra on Sunday, and to show their support and respect for Pryor, says Kim Leevers, Chairperson of Wingecarribee Reconciliation Group.

Wingecarribee Reconciliation Group invites you to join us to support Clinton’s Walk for Justice at the Aboriginal Tent Embassy, Canberra from 11.00am on Sunday 3rd September on the final leg of this truly amazing achievement.

And I’d like to give you a few good reasons to come along and be part of it.

When I first met Clinton in Nowra, I was immediately stuck by how humble and gentle he seemed. Not a big man, not a robust man.

When he spoke, he grew and in his words you could hear the depths of the deserts he’d been through, you could hear the anguish of the voices of the countless stories of dispossession, destruction, massacres and injustice against the Aboriginal peoples.

The sheer physicality of what he had achieved to this point was staggering. Walking every step of the way from Matagarup (Heirrson Island) in the Swan River, Perth to Nowra NSW.

I have flown across Australia from Sydney to Perth innumerable times. I have driven across the Nullabor a couple of times. I know how far this is. Yes – approximately 5500kms and this young man has walked all this way with his small team in support. In anyone’s eyes this is a magnificent achievement in itself. But this is more than a stroll through the desert.

Clinton in undertaking this enormous journey has also embarked on a cultural and spiritual quest. He has followed cultural protocols, paid respect to the Elders in all the different country he has been in. He has borne witness to their countless stories and carries within him this vast store of knowledge of centuries of injustice.

His Walk for Justice to stop the forced closures of remote communities and homelessness has become a much broader rallying point for all the injustices suffered by the Aboriginal peoples for over 229 years of colonialism. He is now the “Spirit Walker” and an acknowledged Elder of his people. An extraordinary responsibility for such a young man.

Along the way he spoke to schools, to universities, to rallies and gathered people to share their stories. He broke through some barriers, he brought disparate people together. He explained how the many communities he visited, Aboriginal and non-Aboriginal, were all confronted with similar problems. Uncaring government, lack of resources, suicide, homelessness, lack of proper health facilities, low employment, high food & fuel prices. Third world conditions for water, sanitation, rubbish removal in this one of the richest countries in the world.

How could it be that a country so rich in resources had such vast disparities in wealth distribution? It is wrong. There is something the matter with our system of government, of ownership, of control that creates such distortion.

And clearly from Clinton’s cultural perspective this is because the deep law of this land is not being listened to. The 65,000 years of Aboriginal knowledge and law have been disrupted by the last 229 years of colonialism and the corporate puppet governments that exist today. Time to get things back into perspective, back into alignment.

Clinton was welcome by local elder Aunty Val and he told us of his journey to date and his desire to meet with the Governor General to bring to his direct attention the plight of the First Nations peoples and their desire to establish a treaty. He was then presented with a possum skin cloak to wear while he is “on country”.

The look of joy on Clinton’s face when he was wrapped in the cloak was something to behold and he requested that he be able to wear it when he is in Canberra meeting the Governor General.

This possum skin cloak was made by the local Aboriginal community during NAIDOC week a few years ago as a cultural renewal project (for more information, watch the interview below with Jo Albany). 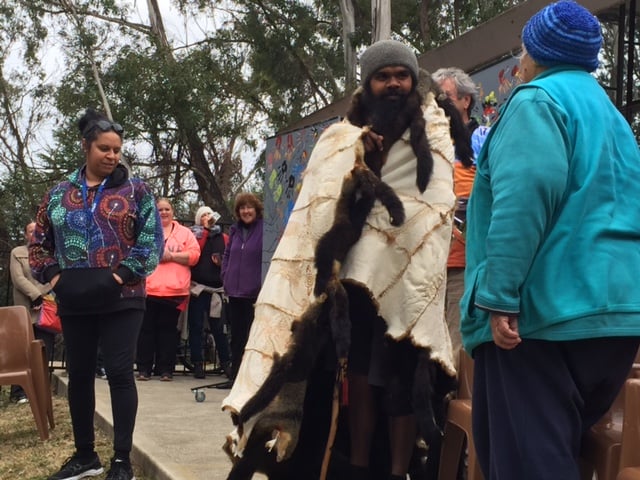 That the cloak is now having a role in Clinton’s Walk for Justice is a sense of great pride to this community and the people involved in its creation.

This is the effect of Clinton’s Walk for Justice; his presence in a community is a unifying thing. He is bringing people together through making them aware of their shared histories. Encouraging them to put aside their differences, to work together for all their benefit.

In the Wingecarribee Shire where we have hosted Clinton and the team for a week or so, it has been heartening to see so many different people, businesses, organisations make gestures of support through donations of cash, food, accommodation, clothing, shoes, tents, sleeping bags, blankets pillows and more.

The generosity shown speaks to our better angels and reminds that even in this cruel hard cold world of geopolitical tension, enormous injustice and government impotence, there are, and always will be good people, with good hearts who will always rally and support causes that are based in truth and justice. I’d like to thank all of those wonderful people for lifting my heart and spirit with their kindness.

And this is why I want you all to join with us on Sunday to support Clinton’s Walk for Justice.

It is to say thank you to this remarkable young man and his dedicated team who set out on an impossible journey, who traversed the desert, who has known the depths of despair and been visited by the ancestors in his dreams.

Clinton’s Walk for Justice is for all of us and we should all be there for him to celebrate this incredible achievement, the effects of which will have ramifications for years to come.

Be a part of it, be part of a lifetime opportunity to make history and say thank you Clinton Pryor, Elder, Spirit Walker.

• Kim Leevers is the Chairperson of Wingecarribee Reconciliation Group Inc, and his history honours thesis was on First Contact/Frontier Expansion in the Wingecarribee area between 1798 – 1821: Exploration and Analysis.

Listen to the story of the cloak, with Jo Albany

• See also reports from the BBC and New York Times.

• See Clinton’s Walk for Justice Facebook page, and donations can be made here.

PrevPreviousRelationships, stories and healing: Indigenous knowledges for mental health and wellbeing
NextHumiliating welfare recipients is no solution to addictionNext