Calling health professionals to stand up on May 1, and join the “Selfish Rabble”

Widespread anger and concern about the threatened closure of remote Aboriginal communities in Western Australia have galvanised a national movement of opposition, as has been seen in a series of marches and protests around the country.

As a number of Croakey articles have shown, there are profound concerns about the potentially damaging health impacts of the threatened closures, amongst many other concerns.

The campaign is an impressive display of resistance and resilience – and could also be seen as a community-driven public health initiative.

But when an #SOSBLAKAUSTRALIA march brought central Melbourne to a stand-still last Friday, The Herald Sun newspaper responded with an inflammatory, insensitive headline that generated considerable anger and upset, as was reflected on Twitter. 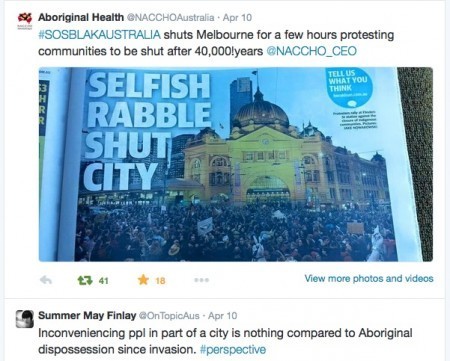 Meanwhile, #SOSBLAKAUSTRALIA has declared May 1 a day of national protest against the threatened closures, and Croakey suggests that health professionals should consider joining the protest.

Read the article below to see why Dameyon Bonson, the Founder of Black Rainbow Living Well – for Indigenous LGBTQI Suicide Prevention, hopes that former AMA leader Dr Kerryn Phelps will also join the May 1 protesters.

Thousands of everyday Australians came together on Friday, April 10 to express their opposition to the forced closure of remote Aboriginal communities, particularly those in Western Australia.

As the #SOSBLAKAUSTRALIA website states, the campaign aims: “To support the Aboriginal communities in Australia to remain in their homelands and on country & enable them to self-determine their own futures”.

These rallies are publicised and shared across social media, by both Indigenous and non-Indigenous Australians, and are not the first rallies, nor will they be the last. May 1st is the next round.

Everyday Australians are coming together, in unity and solidarity to protect the homelands from closure. A few people felt inconvenienced by Friday’s rally in Melbourne.

Dr Kerryn Phelps, an elder of the Australian LGBTQI community and well known and respected non-Indigenous Australian, chimed in on Twitter to one of the many discussions that was happening on Saturday morning, the day after the #SOSBLAKAUSTRALIA rally in Melbourne.

Dr Phelps commented on a tweet by public health practitioner Daniel Reeders that was retweeted by Melissa Sweet, journalist and author of this blog.

Responding to the Herald-Sun headline, Mr Reeders first wrote “Revealed values: some white people delayed on their way home one night matters more than whole Aboriginal communities having homes at all.”

If you have been following the #SOSBLAKAUSTRALIA campaign on Twitter and IRL (in real life), Mr Reeder’s tweet was a fair description of the phony outrage.

Dr Phelps responded on Twitter in a way that I can only describe as reactive and ill thought out – it happens a lot on Twitter, I’m not immune from it, I’m sure.

Dr Phelps’ reply, “Separate issues. You may not agree with closure of remote communities, but it is not OK to paralyse a major city”.

As a gay man, I was a little taken aback and then confounded that this comment came from a lesbian, who is vocally supportive of both PRIDE and Marriage Equality, both which hold significant marches or rallies every year. PRIDE marches are set to a yearly schedule, whereas the Marriage Equality rallies can be organised within weeks or months. PRIDE today was born out of protest back in the 1970’s.

The #SOSBLAKAUSTRALIA rally in Melbourne had been advertised on social media for at least a couple of weeks, and is part of series of rolling rallies, with the first happening on March 19th this year.

Dr Phelps went on to justify her sense of observed/experienced paralysis of Melbourne with “I think I can stand on my record on indigenous advocacy without having to acquiesce to any form of protest.”

Mr Reeders tweeted separately to the thread shortly thereafter, “Isn’t that the ultimate privileged white elder response? ‘My past activism should make my current views immune to criticism.'”

Suddenly people rallying – which, by the way is their democratic right – against the closures of remote Aboriginal communities, a human rights issue, were, in Dr Phelps’ mind going to be responsible for any hold up to emergency proceedings or…was she meaning, what? If someone died because an ambulance couldn’t get through, it’d be the crowd’s fault?

It would be those people who have joined together in solidarity, in something that is largely becoming a civil rights issue, and perhaps the most organic act of reconciliation this country has ever seen, would somehow be responsible?

Dr Phelps, if everyday Australians causing a traffic delay is interpreted by yourself as “paralysis”, I’d love to know what word you use to describe the reality of fearing your community, your home, is on the hit list for closure.

I sat arms length from an Aboriginal woman, younger than myself, attempting to control her sobs as she told of the fear of no longer having a home. This woman told of the effect the threat of their homes being taken away is having on her grandparents, elders and older Aboriginal people, as well as the young people, because they too can sense the fear. They all can.

I’m not at all sorry your Friday night was inconvenienced.

What’s perhaps the most astonishing aspect of your comments on that Saturday morning is that none included those simple but very powerful two words, “I’m sorry.”

But, I hope that you are sorry for being disrespectful to the hundreds of families earmarked to be forced out of their homes and off their land.

You no doubt offended many with your comments, and I do hope you are sorry. Because what you also did was show disrespect to many, many, more.

#SOSBLAKAUSTRALIA is a defiant act of reconciliation. Get on board or, respectfully, get out of the way.

Everyday Australians want change, no matter how inconvenient it may be for you.

May 1st is the next rally of #SOSBLAKAUSTRALIA protectors. Come show your support. It’d be the Australian thing to do and I’m sure you’d be welcomed.

• Dameyon Bonson is a Broome-based (on Yawuru country), Mangarayi/Maubiag Island male. He is the Founder of Black Rainbow Living Well – for Indigenous LGBTQI Suicide Prevention.

He is an anti domestic violence campaigner and an invited member of the National Advisory Committee for the Aboriginal and Torres Strait Islander Suicide Prevention Evaluation Project (ATSIPEP). You can follow him on Twitter @DameyonBonson 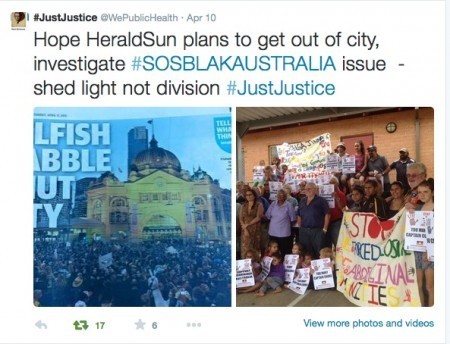 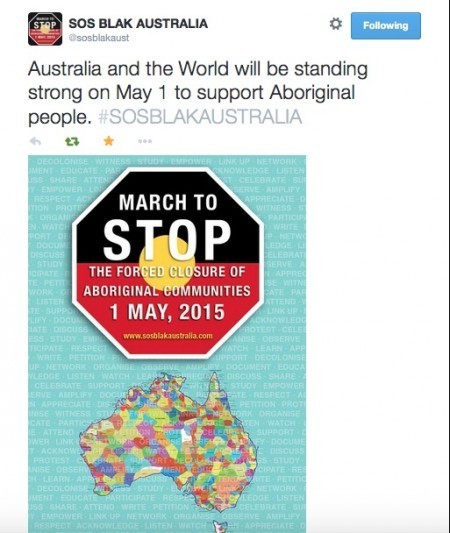 PrevPreviousA medical student explores the importance of Aboriginal culture, Country and the homelands movement
Next“One year after Ebola” – and what have we learnt? #LongReadNext