Hopefully, somewhere there are researchers planning to document the impacts of the processes and outcomes of the Federal Government’s Indigenous Advancement Strategy (IAS); not least because of the likelihood of negative consequences for the health and wellbeing of individuals and communities.

It seems a safe guess that any such investigation would find the process has been traumatic, chaotic, and confusing for many – in fact, an example of  structural violence in action.

(Although, to keep a perspective, this is also a pretty fair assessment of the history of so much policy in Indigenous affairs – read Ros Kidd’s book, The Way We Civilise: Aboriginal Affairs – The Untold Story, for so many examples of government-inflicted structural violence).

Last week, the Minister for Indigenous Affairs Nigel Scullion announced grants of $860 million to 964 organisations to deliver 1,297 projects but, according to ABC radio, only 41 per cent of applications were successful, and there is widespread angst and uncertainty about which applications were funded, and for how much.

The lack of clarity and transparency around the funding processes and outcomes is adding to the distress for many – generating a discussion on Twitter using the hashtag #IASlottery (see the bottom of this post for some of the related tweets).

In a statement (full details below), ANTaR’s national director Andrew Meehan described the IAS tendering process as opaque and unclear, and said it had caused great upheaval and anxiety for many services.

Meanwhile, the National Congress of Australia’s First Peoples is urgently seeking details from applicants in order to clarify the IAS situation (see the request from Geoff Scott at the bottom of this post).

While the community controlled health sector may have received some good news from last week’s funding announcement, it beggars belief that Indigenous legal services are being slashed when over-imprisonment is such a critical concern. Hopefully, researchers will also document the impacts of these cuts in order to hold government to account.

Responses from the Twittersphere 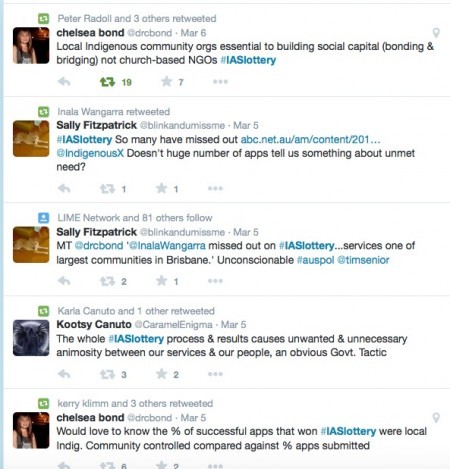 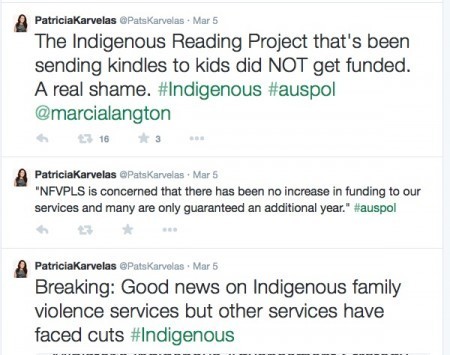 In recent days, there’ve been some general announcements regarding the Indigenous Advancement Strategy (IAS) overseen by the Department of Prime Minister & Cabinet.

However, this information is vague and not definitive and Congress is currently making representations to the office of Indigenous Affairs Minister Nigel Scullion about it. In the meantime, in an effort to put together a clearer picture for our communities, we’re URGENTLY seeking information and advice from organisations about submissions they made under the IAS, and any news/responses received to date.

It would be greatly appreciated if you could provide such information as soon as possible, confirming you are happy for it to be made public. Please also distribute this email far and wide, to any other organisations you feel may have been affected.

Please send responses to this email to geoff.scott AT nationalcongress.com.au

Following the announcement of the Indigenous Advancement Strategy (IAS) grant round on Wednesday, National Director

Andrew Meehan said it was clear that the tendering process for the IAS has caused great uncertainty and continues to do so.

Mr Meehan said “There is great confusion as to who has been funded to deliver what range of services, and in which areas across the country.”

“There’s even confusion among organisations that have been funded as to which projects in their tender they’re being funded for, and for how long,” he said.

Mr Meehan said that the IAS tendering process has been opaque and unclear from the start, and has caused great upheaval and anxiety for many services.

“The problem is that there has been minimal engagement with Aboriginal and Torres Strait Islander people and their representatives as to how this might work,”Mr Meehan said.

“Moving to a widespread tendering process where everything is up for grabs, alongside the $534 million in cuts in last years budget,has been a great disruption to the provision of services to those most in need,” he said.

“Government needs to sit down with Aboriginal and Torres Strait Islander representatives and work through a better approach,” he said.

He said that while it was difficult to get a clear picture of what has been funded, reports are starting to emerge thatsome vital organisations have not.

“It’s unacceptable that the National Aboriginal and Torres Strait Islander Legal Services and parts of that sector do not appear to have been funded given the incarceration crisis the nation is facing,” he said.

While welcoming reports of funding Family Violence Prevention Legal Services, Mr Meehan said there were more questions than answers with the announcement of the grants round.

•How would needs be met in communities where organisations were not funded?

•What is the scope, range and coverage of service provision funded?

•How will government account for those services that did not get their applications in in time, or due to capacity or other reasons did not apply?

• How is the approach dealing with the 1230 ‘non-compliant’ applications?

•When will the next round occur?

Mr Meehan said that he understood that there had been more than 2,400 applications put in for nearly 5,000 projects worth $14 billion.

The total funding allocated to the IAS through to 2018 was $2.3 billion. Of the applications put in, he understands that nearly half (1233) were deemed ‘non-compliant’, and of those funded some services appeared to be receiving three years of funding, and others one year.

For more information from the Government: Answers to commonly asked questions