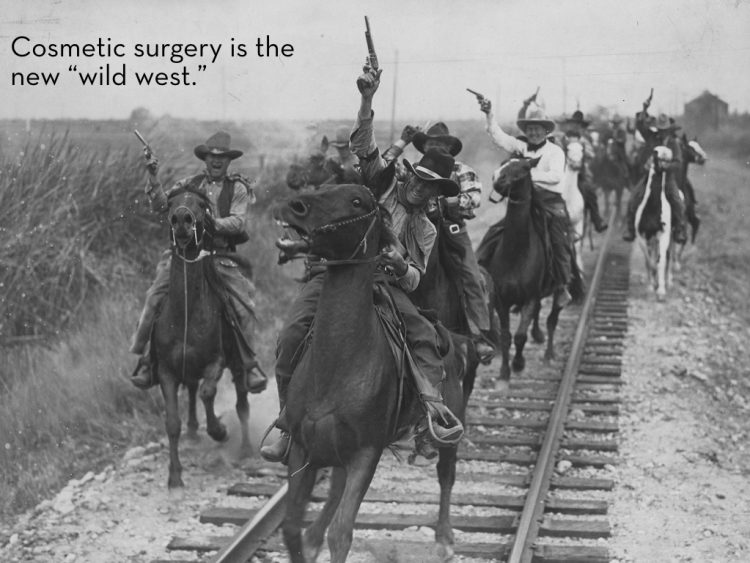 Slide shown by Dr Tim Papadopoulos at the conference

Calls for a regulatory crackdown on the “wild west” of cosmetic surgery. Plus, how is medically assisted death working out in Canada?

Concerns about the safety and quality of cosmetic surgery were highlighted at the 12th International Medical Regulation Conference in Melbourne last week.

Another issue flagged during a session on emerging issues for medical regulators around the world was the implications of a landmark Canadian Supreme Court decision in 2015 to legalise medically-assisted deaths.

Journalist Marie McInerney reports on the “emerging issues” session, in this latest story from #IAMRA2016 as part of the Croakey Conference News Service.

Cosmetic surgery in Australia is “the new wild west”, leaving a trail of victims who are scarred for life, according to a leading Australian specialist plastic surgeon.

Dr Tim Papadopoulos called for Australian authorities to stamp down on inadequate regulation that allows any registered medical practitioner to describe themselves as a cosmetic surgeon when they may only have done a weekend course in breast implants.

“Patients are screaming out for help,” he told the conference in a presentation titled: ‘Bad things happen when good people do nothing: how unscrupulous exploitation of loopholes harmed unsuspecting patients in 2016’.

Asked whether such comments could be seen as turf protection by plastic surgeons, Papadopoulos said such accusations are “a very convenient distraction to gloss over the appalling lack of basic patient safety”.

“What we’re trying to do is protect the public from improperly trained, self-regulated GPs who do not have the appropriate knowledge, experience, nor skills to perform surgery at such a high level,” he said.

His comments follow growing public and regulator concern over risks to public safety, including from so-called “backyard beauticians” who perform cosmetic surgical procedures in homes or hotels.

Former NSW Health Care Complaints Commissioner Professor Merrilyn Walton, who chaired a New South Wales Ministerial Inquiry into Cosmetic Surgery more than 15 years ago, has written of concerns that cosmetic surgery is not a recognised branch of medicine, so operators are only required to have a general medical degree.

Papadopoulos outlined three cases of concern, including one that prompted the Health Care Complaints Commission to issue a warning of a “real risk to public health and safety” from non-registered practitioners who advertise through social media platforms and perform cosmetic surgery service in facilities with little, if any, infection control measures.

The Commission outlined the complaint from a woman who underwent a double eyelid suture procedure in a Sydney apartment, saying:

The treatment caused bruising and scarring to the patient and damage to her eyelids. The Commission’s investigation has so far determined that the practitioner who carried out the surgery is not registered as a medical practitioner in Australia and was not qualified to conduct the surgery. Upon executing a search warrant at the premises, Commission staff located a number of prescription-only medications that had been illegally imported into Australia. This included Botulinum toxin (Botox) and hyaluronic acid injection preparations (Dermal fillers).

The practitioner was later banned, and NSW Health urged her customers to see their GP for blood tests because of the risk of infections for blood borne viruses.

In its investigation, the New South Wales Deputy State Coroner said the case bore “some of the troubling hallmarks of “quack” medicine: “desperate patients, pseudo-science and large amounts of money being charged for unproven therapies”.

Papadopoulos welcomed new laws announced in New South Wales in June that will require cosmetic surgery to be performed in accredited and licensed facilities. But he said more still needs to be done.

He is particularly concerned that practitioners should not be able to operate and describe themselves as cosmetic surgeons unless, like him, they had completed surgical training equivalent to that required for fellows of the Royal Australasian College of Surgeons.

Currently, he said, GPs can do just a weekend course or workshop in cosmetic surgery.

“Almost anything goes,” he said. “We must impose stronger regulation over who can perform surgical procedures and drive unscrupulous and dangerous operators out of the profession.” 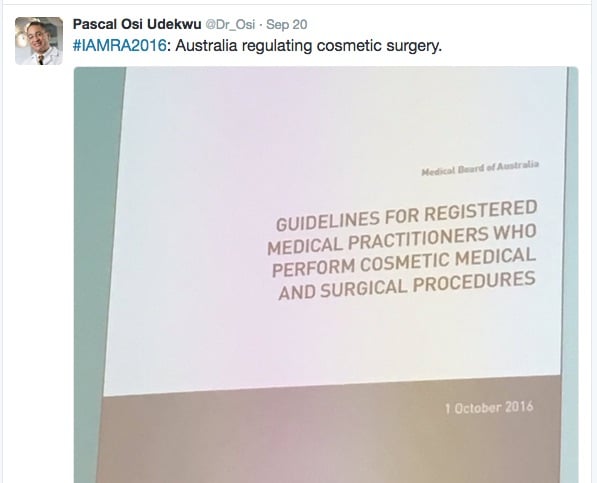 The Medical Board of Australia earlier this year issued guidelines on cosmetic medical and surgical procedures that include cooling off periods for adults and minors (including a mandatory evaluation by a psychiatrist, GP or psychologist for under 18s), and a requirement for emergency facilities when sedation, anaesthesia or analgesia are used. They come into effect on 1 October.

Asked by Croakey about the concerns raised by Papadopoulos, a spokeswoman for the Board pointed to detailed discussion on the issue on page 24 of the Regulation Impact Statement and said it regulates by title and not by scope of practice. She said the recognition of a speciality comes via a detailed Australian Medical Council process, with recent examples including sexual health medicine and sports medicine.

“The Board reviews all policies, codes and guidelines on a 3-5 year schedule and we will consider whether the new (cosmetic surgery) guidelines have been effective in better protecting patients in the context of that scheduled review,” she said. 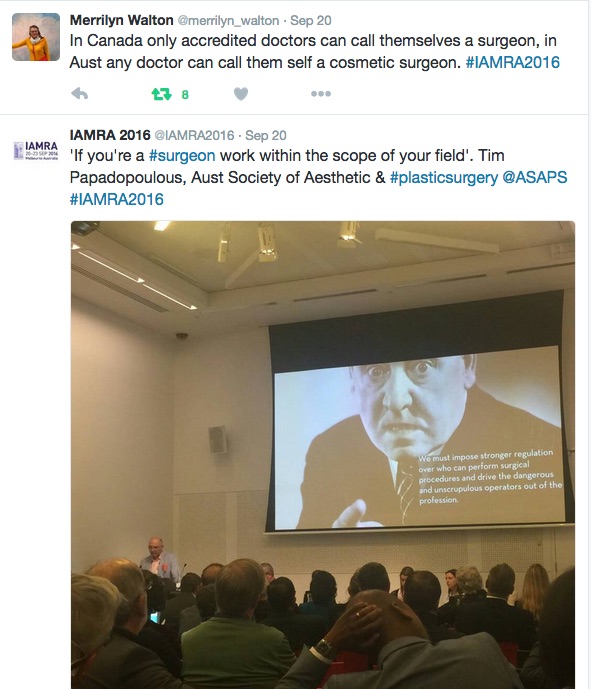 Dr Heidi Oetter says the introduction of medically assisted death for terminally ill people in Canada is the biggest social change she expects to see in her lifetime.

Yet the head of the College of Physicians and Surgeons of British Columbia says authorities have managed to “navigate the regulatory framework quite seamlessly” since February 2015, when the Supreme Court struck down the country’s law that banned doctor-assisted death.

That’s not to say that there is not continuing controversy around the laws. Some critics say they don’t go far enough and will prevent people with degenerative conditions, such as multiple sclerosis, from seeking assisted suicide. Others, including individuals and religious groups, remain totally opposed and have launched legal challenges.

Dr Trevor Theman, Registrar of the College of Physicians and Surgeons of Alberta, told the conference that polls show around 70 per cent of  Canadians are in favour of the new laws. Surveyed doctors had expressed similar levels of support on the right as individuals to have assisted death, but were less ready to be the one to assist a patient’s death, he said.

A 2015 survey of 1,400 doctors by the Canadian Medical Association found 29 per cent of its members would consider providing “medical aid in dying” if requested by a patient, but 63 per cent would refuse. However, around 70 per cent supported their own right as individuals to choose medically assisted death.

A 2015 survey of 1,400 doctors by the Canadian Medical Association found 29 per cent of its members would consider providing “medical aid in dying” if requested by a patient, but 63 per cent would refuse. However, around 70 per cent supported their own right as individuals to choose medically assisted death, he said.

The Supreme Court’s landmark Carter decision, as it is known, makes Canada one of the few countries that permits assisted death, alongside Switzerland, the Netherlands, Albania, Colombia and Japan, and some states of the United States.

It gave the government 12 months to amend Canadian laws to implement the decision.

Media reports say that more than 100 Canadians, including novelist WP Kinsella, have died with the assistance of medical practitioners since the new law took effect in June.

In its ruling, the Supreme Court declared that the previous prohibition on assisted death:

…deprives some individuals of life, as it has the effect of forcing some individuals to take their own lives prematurely, for fear that they would be incapable of doing so when they reached the point where suffering was intolerable. The rights to liberty and security of the person, which deal with concerns about autonomy and quality of life, are also engaged. An individual’s response to a grievous and irremediable medical condition is a matter critical to their dignity and autonomy.”

The Court explicitly said its ruling would not “compel” physicians to provide assistance, but said that the constitutional rights of patients and physicians would need to be reconciled.

Oetter said regulators had spent the last year developing professional standards to comply with legislation and also the professional and ethical expectations of physicians who would be involved in assisted death or were going to be conscientious objectors.

“We’ve been very clear with physicians that even if they may have moral or other objectives to providing assistance in dying they have an obligation to their patient to make sure they have enough information to make an informed decision about their health care,” she said.

“Most importantly, they must not abandon their patient or ask the patient to justify their belief or impose their own belief systems on patients,” she said.

She said laws refer to medically assisted death to recognise that healthcare is not just provided by physicians, and to therefore guide and protect the role also of nurses, pharmacists, and family members who support the decision.

“It hasn’t been a difficult process,” Oetter said, saying all relevant agencies had come together to work on the landmark changes. “It wasn’t being for or against medical assistance in dying: it was about what is in the public interest, what does patient safety look like and what kind of ethical and professional standards do we bring to that?

“We kind of got it right in a short period of time,” she said. 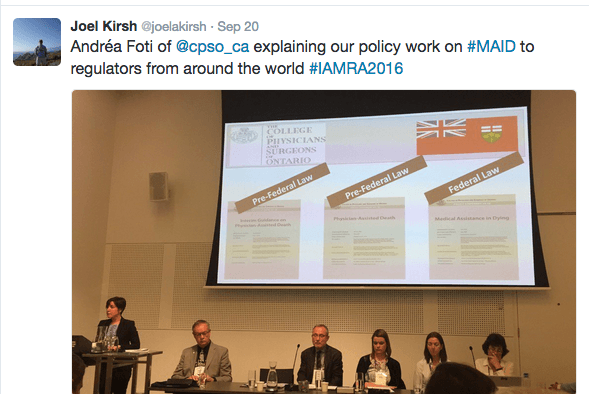 At a critical juncture for the world, a powerful call for governments to put health first

PrevPreviousWhy nurses are fighting moves to “Americanise” public hospitals in NSW
NextOn the latest suicide figures: working for safe conversations and a call for more resources in preventionNext