Calls for alternatives to police in mental health crises

Police should not be involved in most frontline mental health crisis responses because too often their interactions escalate and result in further distress, trauma, physical harm, and death for the person in crisis, a mental health consumers conference was recently told.

The call for “alternatives to policing mental health crises” comes as the Productivity Commission’s recent draft report documented a dramatic increase in the numbers of police callouts to people with mental health issues.

In Victoria, police facilitated about 14,000 ‘mental health transfers’ to hospital, but attended 43,000 psychiatric and suicide related events in 2017-18, with the number of psychiatric events up an astounding 88 per cent from 2014-15. See extract from draft report below:

Meanwhile, a police investigation is underway into the fatal shooting in September of an Aboriginal woman in Geraldton, Western Australia, after police were called for help.

Family and friends of Yamatji woman Joyce Clarke are demanding to know why police drew their guns instead of deploying a taser or other non-lethal method.

Clarke’s case is yet another tragic reminder that people experiencing mental illness, particularly Aboriginal and Torres Strait Islander people, are not only massively over-represented in the justice system but also in incidents involving both fatal and non-fatal police force.

Kennedy and co-presenter Rory Randall said their presentation was not related to their professional roles as mental health consumer researchers but from their personal concerns as people with lived experience and advocates of better mental health care.

They said people in mental health crisis are often manhandled, dehumanised, restrained in transport to hospitals, and left in police watch-houses without support or medications.

Kennedy, who personally experienced the “psychic harm” of a police emergency response three years ago following a suicide attempt, described the experience:

(I was) put into the back of a paddy wagon, taken to hospital, sliding around in the back”

While Kennedy and Randall say that ultimately they support police and prison abolition, they now want to open up conversations about emergency alternatives to police that go beyond the types of services highlighted last week by the Productivity Commission inquiry into mental health.

However, it doesn’t look specifically to reduce their involvement or at how risky and problematic a police presence is for many people, particularly Aboriginal and Torres Strait Islander people, as again was seen tragically last month in the fatal shooting by police of 19-year-old Warlpiri man Kumanjayi Walker in the remote community of Yuendumu. 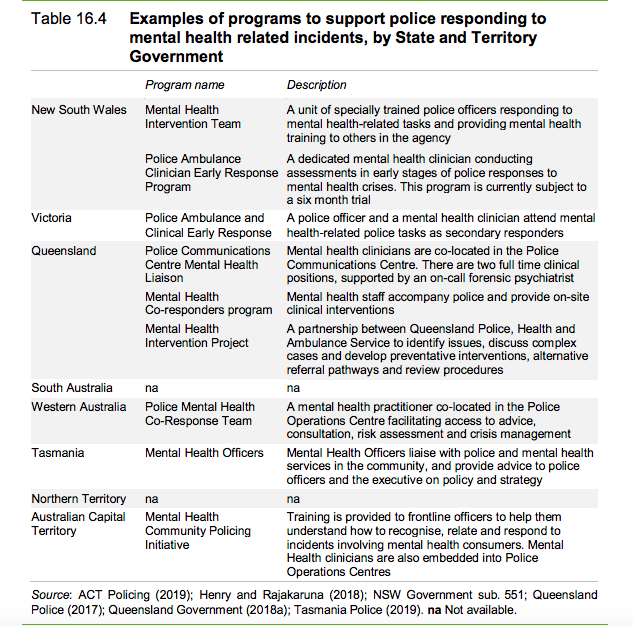 Victoria’s own Royal Commission into mental health, which is due to hand down its interim report on Thursday, is being urged to take a much broader view to reduce police involvement in mental health matters.

Like others campaigning for change, Kennedy and Randall want to “uncouple mental health crises from the emergency system” and encourage health and community service providers, as well as members of the public, to think before they call the police.

“We want people to ask themselves: ‘Is this my only option, is this a good option?’”

“We need every person walking past us to not assume if we’re talking to ourselves that we need a call to police or a crisis intervention,” Randall said.

They point to the work in the United States of the Oakland-based Critical Resistance, and are planning to produce a local version of this flowchart that encourages alternatives to calling the police in a crisis.

Other initiatives in the US include the 30-year-old Crisis Assistance Helping Out On The Streets (CAHOOTS) program in Oregon that diverts nonviolent mental health-related 911 calls to a health specialist instead of police, and San Francisco’s mobile app Concrn that provides connections to “compassionate responders” as an alternative to police.

Kennedy and Randall said Australian police did not necessarily have “heinous intent” but pose a threat to people in mental health crisis. This is not only because they lack enough specialist training but also because, fundamentally, they are instruments of the state and equipped for deadly force.

Adding to this risk is ongoing stigma about mental health, with people with mental health issues much more likely to be victims of violence than to perpetrate it.

Like people of colour, they are “over-policed and over-criminalised”, Kennedy and Randall said.

Melbourne’s Police Accountability Project, based at the Flemington and Kensington Community Legal Centre, which has done much work on racial profiling by police, is also calling for an end to having police as first responders to mental health call outs.

Its submission to the Royal Commission into Victoria’s Mental Health System says it is aware of families that “no longer call the police to assist ill relatives for fear their loved one may be shot or injured”.

The Project says there have been shocking cases of “misuse and abuse” of police powers in Victoria, including that of an invalid pensioner who last year was “beaten, abused and humiliated” by police in a mental health callout that was captured on CCTV footage.

It reported that all but six of 48 fatal encounters with police in Victoria from 1982-2007 involved victims with histories of mental health problems.

But even when incidents are not fatal, “in an unacceptably high number of cases, the attending police response has resulted in increased fear, anxiety or distress of the person in crisis”, prompting a “cascade of escalation” which can end in injury, the laying of charges and sometimes death, the Project says.

The Police Accountability Project says it has no faith that new or more training for police will produce significant change – it says that hasn’t worked in efforts to stem racial profiling by Victoria Police.

Calling for greater accountability to manage complaints against police, it also wants the Royal Commission to recommend a new “non-aggressive, de-escalatory, care-based” response that is led by health professionals and does not involve police or, if so, only in support roles.

“This therapeutic response contrasts with the policing model, with its focus on constraint, control, use of force, arrest and deprivation of liberty,” it says.

Tweets from the #VMIAC2019 session 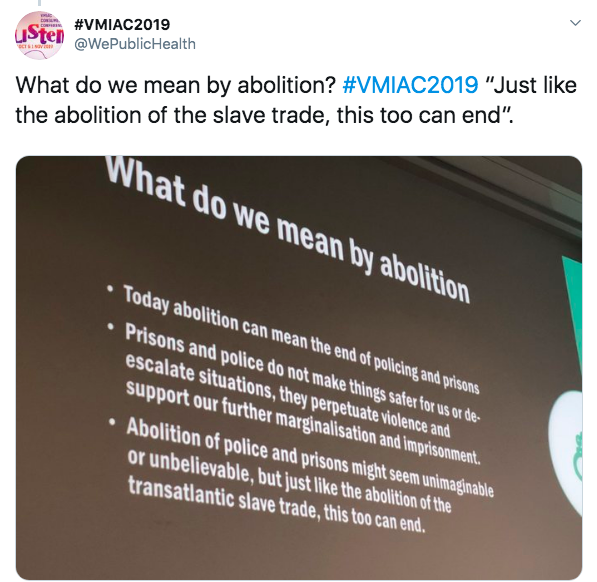 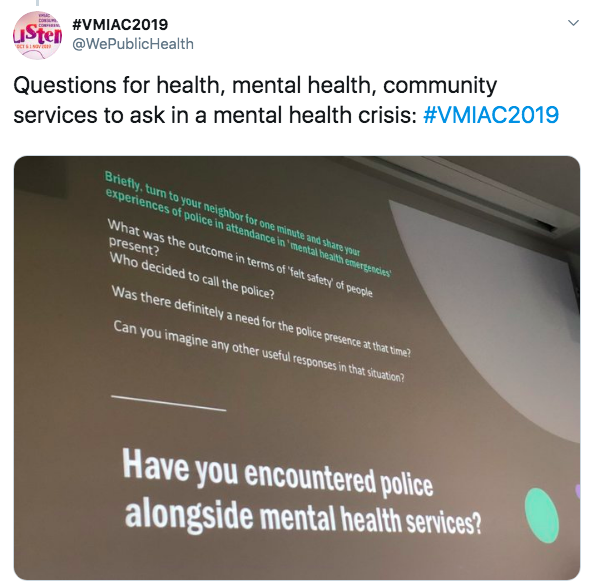