Calls for end to ABC, Monash partnership with Swisse

*Updated with response from Monash, see below*

Veteran public health campaigner Dr Ken Harvey is leading criticism of a new partnership initiative announced this week by the ABC’s international media service Australia Plus (A+) with vitamins and supplements brand Swisse Wellness that also involves Monash University and the Victorian Government.

Click on the link to see the ABC’s full statement or you can read it in full below. Clearly anticipating concerns about such commercial arrangements for a public broadcaster, it notes:

It’s an assurance that hasn’t satisfied others, including the executive producer of ABC programs Gruen and The Checkout, Nick Murray, and John Dwyer, Emeritus Professor of Medicine at the University of New South Wales, who describes the involvement of Swisse as “very regrettable” in this Age article. (A segment on The Checkout resulted in a defamation lawsuit with Swisse in 2014; an ABC spokesman told the ABC’s PM current affairs show on Wednesday that no out-of-court settlement was paid and both Swisse and the ABC paid their own legal fees.) See also other concerns about the arrangement in tweets at the bottom of the post.

In the post below, Harvey points to ethical concerns also for Monash in the arrangement and calls for the relationship with Swisse to be “terminated”.

Harvey quit his position at La Trobe University in 2014 over its $15 million deal with Swisse Wellness to research its products.

The newly announced Australia Plus partnership has attracted considerable critical attention, primarily because of the incorporation of Swisse Wellness Pty Ltd.

Swisse have a reputation for marketing, both in Australia and internationally. Their sales success reflects the large amount of money they spend on marketing hype and celebrity endorsement, not on science.  Indeed, Swisse have had over 20 upheld complaints over the last few years for using scientific claims, including “clinically proven” and “clinically tested”. Their advertising claims have also been the subject of a number of satirical segments on the ABC Checkout program.

The above image says it all: one the one hand it is worth a fortune to Swisse to have their brand promoted in this way; on the other the reputation of Monash University (and the ABC and the Victorian Government) is now irreversibly linked to Swisse. As Benjamin Franklin is reputed to have said, “He that lieth down with dogs shall rise up with fleas”.

The executive producer of Gruen and The Checkout, Nick Murray, has questioned the ability of the ABC to balance editorial and commercial interests when working with a brand such as Swisse. In this article at Mumbrella, he said:

“I know from making shows for commercial networks, that no matter what the good intentions are in separating editorial interests from commercial interests you will end up with a situation in which they impact each other.”

Yesterday, in a response shared with me to an emailed concern about the announcement, the Vice Chancellor of Monash University, Margaret Gardner, wrote:

“There is no partnership between Monash and Swisse.  Monash has a partnership with ABC International, which was put in place last year.  This partnership is to provide communications across the region about Monash research, education, staff, students and alumni.”

This begs the question as to why the Monash logo appears with Swisse on the ABC International promotion (above) and why this disclaimer was not used in the various press releases and media stories publicising the deal. The fact remains that Monash (and the ABC) is damned by association. Why did Monash not insist on due diligence regarding what additional sponsors ABC International was going to line up?

I understand that a meeting has now been organised between Monash and the ABC to look at the wording and logos of this relationship. My own view is that fiddling with words and logos is insufficient, the relationship with Swisse should be terminated.

Finally, my views regarding Swisse and their partnership with ABC International are obviously my own; they do not reflect those of Monash University.

Monash provided the following response to Croakey about the issue:

Monash is delighted to partner with ABC International. This partnership is to provide communications across the region about Monash research, education, staff, students and alumni.  The Monash partnership is a stand-alone partnership. To suggest that because ABC International’s other partner logos appear on their website there is an inter-relationship between them, is false and misleading.

The ABC’s announcement of the partnership: media statement

ABC International’s multi-platform international media service Australia Plus (A+) has announced partnerships with Monash University, the Victorian State Government and Swisse Wellness, to increase Australia’s presence in the region and ABC content presented in neighbouring countries.

Monash University, one of Australia’s leading international research and education institutions, the Victorian State government, one of the prime tourist destinations in Australia and Swisse Wellness, Australia’s leading natural health brand, are the first organisations to join Australia Plus as Foundation Partners.  AustraliaPlus will build its strong presence in the region and develop its growing audience base through meaningful partnerships with Australian businesses aligned to the same purpose.

The Foundation Partnerships will see ABC International highlight the work of Monash, the Victorian state government and Swisse in their respective fields across its Australia Plus platforms and through Australia Plus’ media partner networks across Asia. Other partners will be announced in coming months.

“ABC International has built a network of media partners across the region, extending the reach of Australia Plus content and establishing a valuable platform for presenting Australian stories.” she said.

“Partnering with a respected institution like Monash University, organisations like the Victorian State Government and Businesses such as Swisse, offer us enormous potential to showcase Australian life including education, tourism and business, to audiences in the region.”

Monash President and Vice-Chancellor, Professor Margaret Gardner AO said the partnership agreement with ABC International “gives Monash unprecedented exposure and reach in key Asia Pacific countries and assists us communicate the scale, scope and excellence of our research and education and our global impact.”

Victorian Government Trade Minister, Philip Dalidakis said: “this exclusive relationship with ABC International is a great opportunity for Victoria to showcase that we really do have ‘the best of everything’ – and grow our reputation as the innovation, trade, tourism, major events, food and fashion capital of Australia.”

Swisse chief executive Radek Sali said: “Our mission at Swisse is to make people around the world healthier and happier, and through this exciting partnership we will be able to take our message to a number of new regions and audiences.”

“It also gives us the opportunity to learn more about our different consumers needs, so as we launch into new countries we tailor our approach to suit.”

Australia Plus, ABC International’s multi-platform international media service, was launched in 2014 and is currently available to 190 million people across Asia and the Pacific via online, social media and TV, including to Indonesia, China, Singapore, India, Malaysia and Vietnam in languages including Mandarin, Bahasa Indonesia and Tok Pisin.

From one of The Checkout team 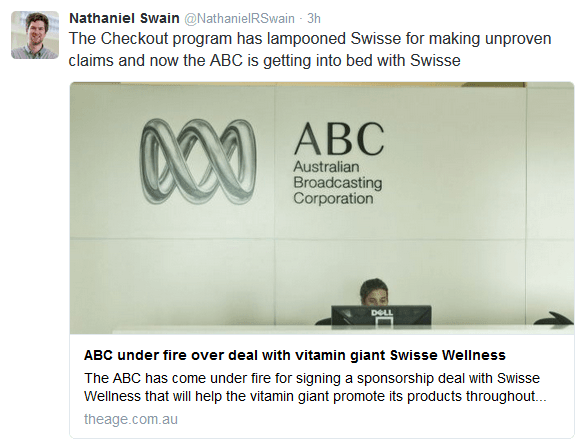 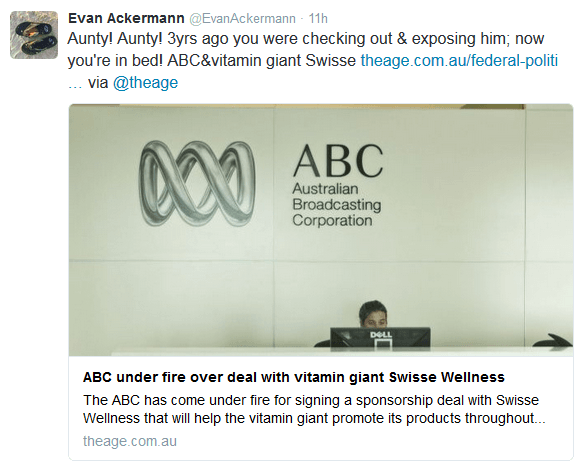 PrevPrevious50th anniversary of the Wave Hill walk-off: “in tough country, under tough treatment, the Gurindji were tougher”
NextIn difficult times, can sharing personal stories help put a stop to attacks on the poor?Next