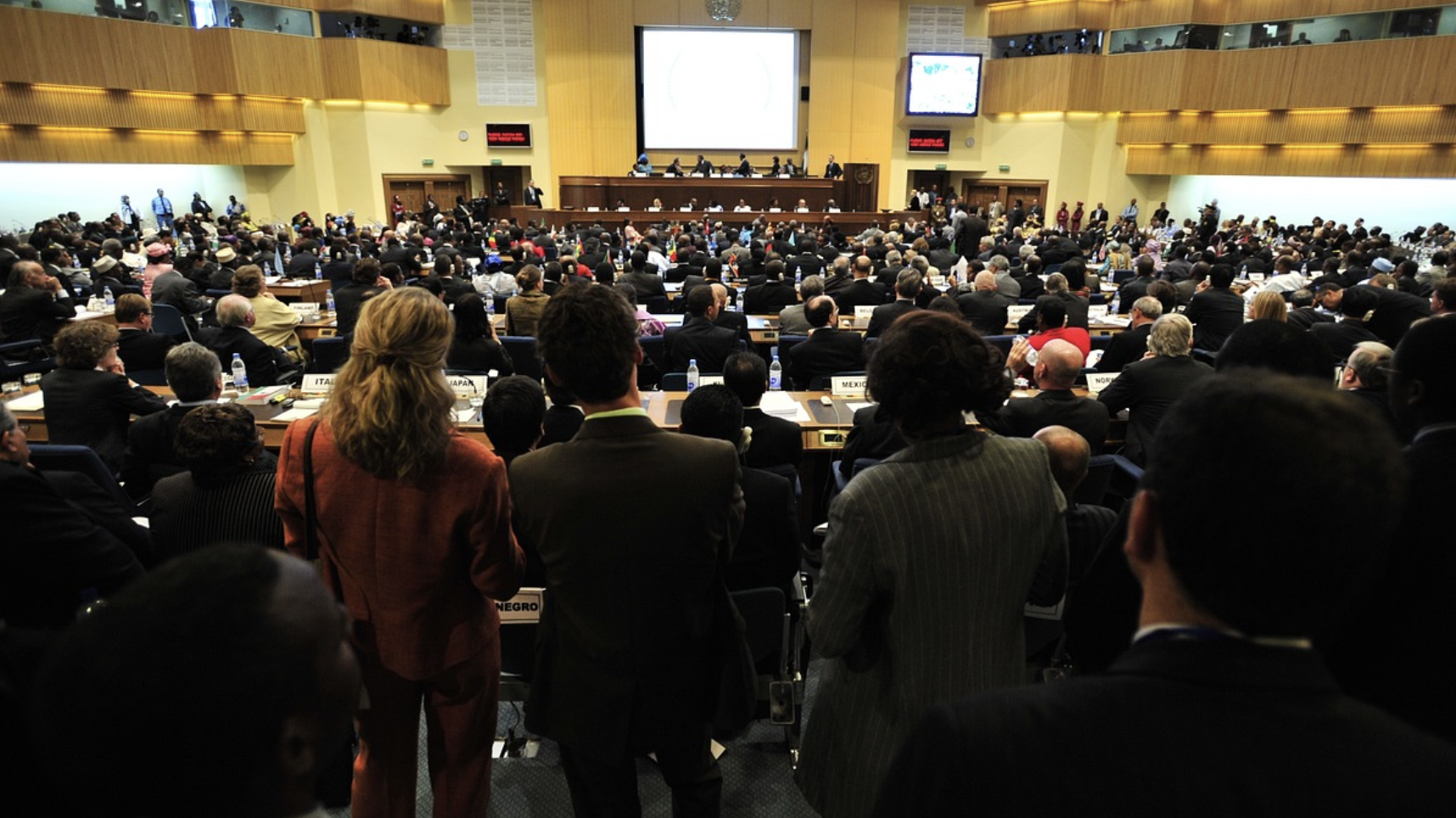 The science on ventilation and COVID-19 is clear – improving air quality is one of the most effective strategies for reducing the risk of infection. Yet despite the mounting costs of acute COVID-19 infections and the growing threat of Long COVID, Australia does not have a systematic approach to regulating indoor air quality.

Below, Professor Lidia Morawska from the Queensland University of Technology and Professor Guy B. Marks from UNSW Sydney outline the urgent need for action on this issue and call on the Government to establish a national regulatory group for clean indoor air to oversee this important component of Australia’s public health response to the pandemic

At the end of the third year of the pandemic, we are no longer surprised to hear we’re in a new wave of infection. It’s fuelled by new sub-variants of the virus that may evade immunity from both vaccination and previous infections.

Authorities recommend control measures, but they are “voluntary”. They include wearing a mask, vaccination, testing if you have symptoms and staying home if you test positive, and ventilation. Ventilation is often the last measure listed – as if it’s an afterthought.

While vaccines are highly effective in reducing the risk of death and serious illness, they are generally not effective in preventing transmission. Wearing a mask reduces the risk of both spreading and acquiring an infection but only when worn properly.

The best way to reduce the risk of transmission is to reduce the concentration of airborne virus that is available to be inhaled and can therefore cause infection.

Adequate ventilation of air in indoor spaces is the key to achieving this goal and should be at the top of the list of control measures. Ventilation reduces the risks for everyone, regardless of other individual actions.

Let’s imagine there’s an infected person in the room we’re sitting in. Imagine we can see the cloud of air they exhale, as if it were laced with a coloured marker, for example, pink.

Imagine how it spreads across the room, eventually reaching and engulfing us. We inhale the “pink” air. If the person speaks or sings, the “pink” of the cloud is much more intense: the concentration of emissions is much higher.

Now imagine that in that cloud we also see some tiny dark green beads: lots of them. These are viruses and bacteria that are emitted by the infected person. They reach us and we inhale them.

Now let’s imagine we inhale enough of the “green beads”, and we are infected with COVID. Or influenza. Or a cold virus.

We can increase ventilation, either by opening the window, or by activating the mechanical ventilation system – basically using any means to get the contaminated air out of the room.

We will soon see that the “pink” of the cloud emitted by our roommate fades or even disappears. Ventilation efficiently removes emissions from the room, and we no longer inhale them.

How to ensure good ventilation

We need sufficient and effective ventilation in our buildings. Sufficient means enough of it, and effective means it’s everywhere within the space, so air doesn’t flow from person to person, transmitting viruses or bacteria between people.

Each building is different, and flexible ventilation systems – to ensure sufficient and effective ventilation – will depend on the building’s purpose.

To be effective, ventilation airflow rates must be controlled by the number of occupants in the space and their activity; the technologies to achieve this exist and are already in use.

Many buildings already have good ventilation, as assessed by monitors of air flows and carbon dioxide (CO₂) in the building’s heating, ventilation, and air condition (HVAC) systems.

But there are even more buildings where ventilation is inadequate and no one measures it.

Ventilation isn’t often measured because, in the absence of legislation mandating ventilation requirements and indoor air quality, no one is responsible for it.

Although the situation varies between different government portfolios and different states, in general, very little has been done to assess or improve ventilation.

The costs of poor ventilation

Viral respiratory infections have long been a major cause of illness and death in Australia. In just one year (2017), influenza and pneumonia accounted for 4,269 deaths. They were the ninth leading cause of death in 2017, moving from eleventh place in 2016.

The economic burden from all lower respiratory infections in Australia was greater than A$1.6 billion in 2018-19.

If only half these infections could be prevented by better ventilation removing the viruses from the air and thus limiting the spread, tens of thousands of people would remain healthy, and millions of dollars saved in Australia every year.

The cost to society of prevention through better designed buildings and gradual improvement of ventilation in existing buildings is much lower than the cost of infections. According to some estimates, this would amount to only 1% of initial construction costs.

But better building designs and improvements won’t be done voluntarily because the money for them doesn’t come out of the same pocket as the money to cover the health-care costs for infected people, or other costs, such as lost productivity or absenteeism due to illness.

As we argued previously in The Conversation, we need a national regulatory group for clean indoor air. Establishing such a group will require cooperation across various areas of government, with the goal of explicitly including protection against indoor air hazards in relevant Australian legislation.

However, the complexity of this public health problem seems to scare the authorities, which prefer to pretend it’s a minor issue.

Clearly, we have a long way to go to change this mindset. But it all starts with raising the awareness of each individual, then legislating indoor air quality standards to remove the “green beads” from the air that end up in our lungs. 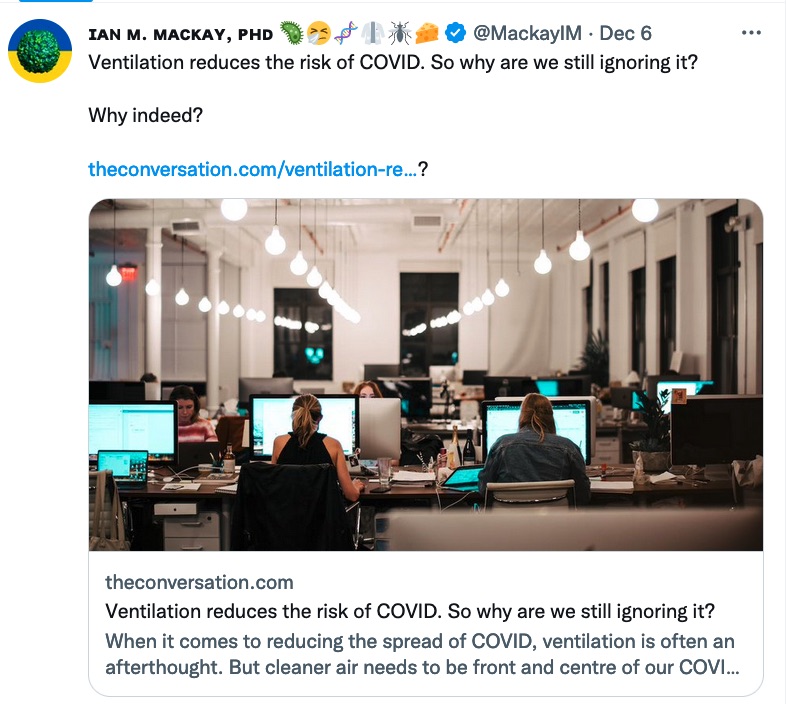 See here for Croakey’s archive of stories on COVID-19

PrevPreviousPutting health at the centre of all climate solutions – a personal reflection on attending COP27
NextWith just 56 days left on wellbeing budget consultation, putting some issues and questions on the radarNext