When the National Shingles Vaccination Program was announced last year, providing free shingles vaccination to 70-year-olds, with a catch‑up program for people aged 71-79, it did not include specific measures for Aboriginal and Torres Strait Islander people.

According to the Immunise Australia Program’s website, the Pharmaceutical Benefits Advisory Committee (PBAC) did not separately consider a proposal for an Aboriginal and Torres Strait Islander specific program.

As a result, the needs of Aboriginal and Torres Strait Islander people are not being met, according to two Victorian doctors, Dr David Corbet and Dr Jenny Royle, who write below that action is urgently needed to rectify this.

*** This article was updated on 5 January with a response from the Federal Health Department. ***

You may have recently seen announcements popping up about the development of the ‘shingles’ vaccination and its availability for Australians aged 70 (with a catch-up program for 71-79 year olds) under the National Immunisation Program (NIP). 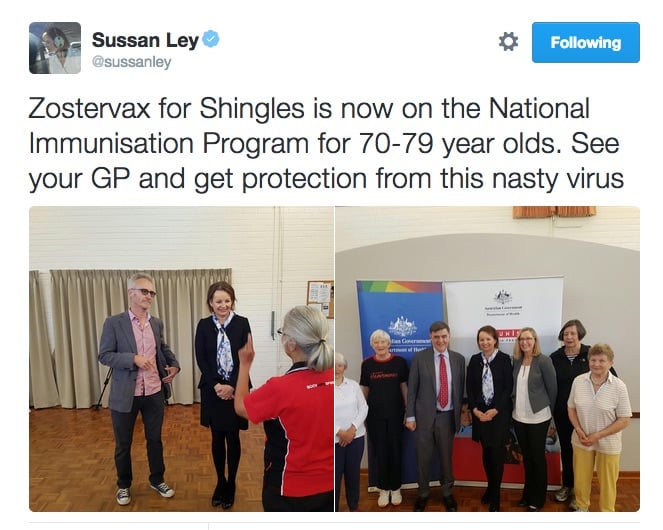 The Minister for Health and Aged Care, Sussan Ley, has even promoted it on Twitter.

Shingles is a vicious disease caused by a reactivation of the varicella-zoster virus, which most people have caught as chickenpox at some time in their youth.

The virus lays dormant until later in life when it can come alive as a blistering painful rash confined to a particular dermatome (an area of skin related to the nerves that supply it).

It can cause death, with 32 deaths recorded in 2013 due to the varicella zoster virus (see page 140 of Australia’s Health 2016), but the morbidity that shingles creates is really the problem, particularly when it leads to Post Herpetic Neuralgia (PHN), a nerve-based pain lasting, in the worst cases, years.

For this vaccination to be funded and made available under the NIP, it had to be approved by various committees and organisations.

Firstly, the Therapeutic Goods Administration (TGA) regulated the provision of the vaccination, allowing the company that produces it to have a licence for its use in Australia – that happened back in 2006.

The drug company then made an application to the Pharmaceutical Benefits Advisory Committee (PBAC), which is an expert body that recommends new medicines for listing on the Pharmaceutical Benefits Schedule (PBS). The drug company made numerous applications from 2007 – 2014. PBAC draws on support from other committees including the Economics Subcommittee and the Australian Technical Advisory Group on Immunisation (ATAGI) who have backup from the National Centre for Immunisation Research & Surveillance (NCIRS).

Suffice to say, a lot of experienced people have been through the data in numerous ways to get to a point where the cost-benefit ratio of the vaccination was deemed to be beneficial on a public health level.

Reading through the public summary documents, there were a few amendments to the PBAC applications that appear to address the cost effectiveness, which is why it has now been approved from the age of 70 rather than from a younger age. The ‘shingles’ vaccine is registered in Australia for use from 50 years of age.

Remarkably, what appears to be missing in all of the public documents available is any analysis or modeling for Aboriginal and Torres Strait Islander peoples. This is partly due to the fact that there is limited data available specifically around shingles and PHN in this population.

Given that the most recent estimates suggest that an Indigenous boy born in 2010-2012 is only likely to live to be 69 and only three percent of the Indigenous population is older than 65, it seems inequitable and wrong to only fund this vaccine from 70 years of age when it is registered for use from 50.

How can the introduction of a vaccine at 70 years of age be consistent with Closing the Gap initiatives?

Aboriginal and Torres Strait Islander peoples account for 0.2 percent of the total Australian population over 55 – in real numbers that is in the tens of thousands. Given the PBAC determination that the projected cost of this vaccination to the Government may be lower than that in the approved submission, it seems that cost is unlikely to be a factor.

We imagine that there has been some oversight in the process, and hope that it will be rectified urgently.

• For more information, see the NCIRS fact sheet for the Zoster Vaccine.

PostScript: Croakey invited the Federal Health Department and Minister Ley’s office to respond to this article, and the Department provided the following statement on 5 December.

Under the National Health Act 1953, the Government cannot consider funding a vaccine on the NIP unless it has first been recommended by the Pharmaceutical Benefits Advisory Committee (PBAC). The PBAC considers the cost effectiveness of a vaccine and disease burden for particular groups of people, before making a recommendation. This is a legislated process, which the Government must adhere to.

The PBAC assessed Zostavax® in November 2014 and recommended that it be available on the NIP for 70 year olds with a time limited catch up for 71-79 year olds for 5 years.

The PBAC has assessed the inclusion of Zostavax® on the NIP for other age cohorts and concluded that a population based program for older and younger age groups was not cost effective.

PrevPreviousLessons from the gaming of waiting lists: reform is needed
NextA *simple* question about your work on climate and healthNext