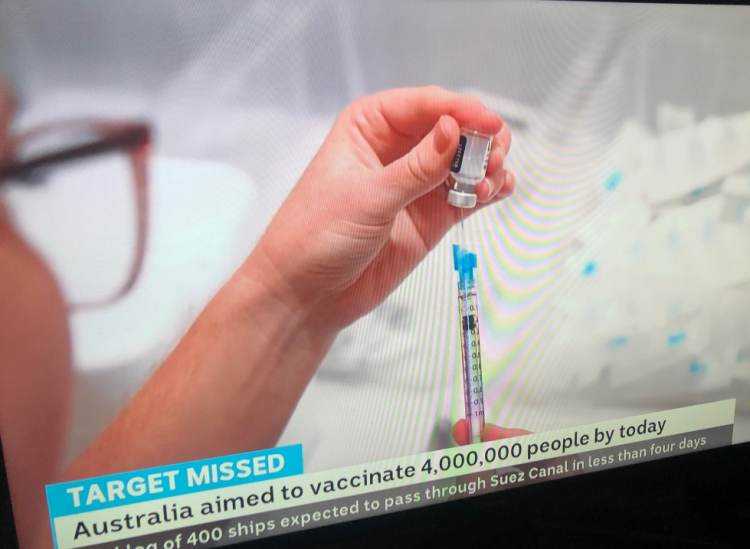 Introduction by Croakey: As has been widely reported, including internationally, Australia has fallen significantly short — by 3.4 million doses — of its original target to deliver four million vaccinations by today.

The failure has prompted a war of words between Federal and State Governments as the worrying outbreak in Queensland linked to the Princess Alexandra Hospital put that state into a snap lockdown.

Queensland Premier Annastacia Palaszczuk was today still hopeful that restrictions could ease tomorrow, saying “fingers crossed, all will be looking good for Easter”.

However, the Easter Byron Bay Bluesfest became a big casualty of the outbreak, when it was cancelled at the last minute by the NSW Government for the second year in a row, amid fears of community transmission in the region.

The ongoing interruption to events, communities and economies, and the risk to health and wellbeing, spurred stronger calls on governments, particularly the Federal Government, to show leadership, be more transparent, and learn the lessons from other nations to improve our vaccine rollout.

Health leaders have called for more transparency in the COVID-19 vaccine rollout and an end to the State/Federal blame game, saying the war of words is “unhelpful and diminished public confidence” in the rollout which has barely made a dent to date in Australian vaccination targets.

“It is unacceptable that there are still unvaccinated doctors and nurses in our public hospitals caring for COVID-19 or even potential COVID-19 patients,” AMA President Dr Omar Khorshid said of the Queensland outbreaks that are linked to the COVID-19 ward at Princess Alexandra Hospital and put the hospital itself into lockdown.

Khorshid added that some rural doctors are struggling to access vaccinations for themselves as they often work hundreds of kilometres away from vaccination hubs.

The AMA has called on the Federal Government to detail:

“Just a few weeks ago, some of this data was being published but it was quickly removed following criticism of delays in the rollout of vaccines,” Khorshid said.

“This does not help build confidence in the rollout of the vaccine at a time when we really need Australians to pick up the phone and make an appointment to protect themselves and their loved ones,” he said, calling on governments to tell the public what role the States and Territories will have in the rollout of vaccines beyond stage 1a.

“While some jurisdictions have moved to vaccinate people under stage 1b, there does not appear to be any agreed national plan which has caused public confusion,” he said. 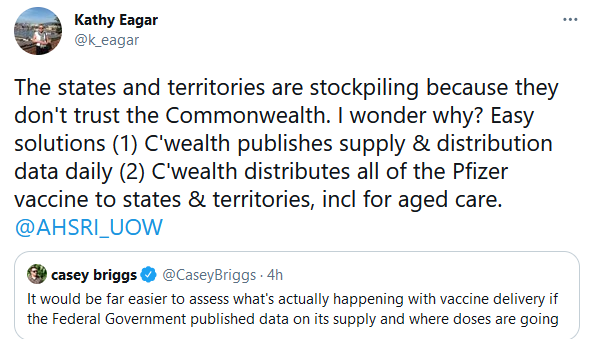 The call for greater transparency was backed by Australian Healthcare and Hospitals Association (AHHA) Chief Executive Alison Verhoeven, who said public and provider confidence in the rollout is being eroded and that more transparent and timely reporting will assist in restoring trust.

“It’s particularly disappointing that many health and aged care workers remain unvaccinated, including a person who worked in a Queensland hospital with COVID patients and is now at the centre of a COVID outbreak cluster,” Verhoeven said, adding that a very public dispute between the Commonwealth and some state governments was not helpful.

“What we need from governments is leadership — and an urgent review of what is working in other countries where the rollout of vaccines has been more efficient,” Verhoeven said.

“The UK, US, Israel, even countries with limited resources such as Rwanda and Ghana, have done much better more quickly. Using all parts of the health workforce, including nurses and paramedics, and mass vaccination centres, must be part of a revamped plan for the vaccination rollout in Australia.

“Realistic timelines and targets, and much less chest-beating, would also be welcome.”

The Federal Government had earlier blamed a slow rollout of vaccines on state and territory governments, however Prime Minister Scott Morrison today sheeted the problems home to blockages on the release of “three million or so vaccines” out of Europe in particular.

“But we are already at over 650,000, I expect by next week we will be into the million, and each week the distribution and the vaccination dosage gets stronger and stronger and stronger,” Morrison told a media conference, adding that Australia is “on track for our first dose for everyone by the end of October”.

He declared: “it’s not a race, it’s not a competition,” saying he was interested in Australians being vaccinated safely, with appropriate care and support given to all of them.

“Can we have a simple, definitive written statement from Morrison on two specific things people are now asking: 1) his response to the actions of Canada & Germany on the AstraZeneca vaccine. 2) the different effectiveness rates of AstraZeneca and Pfizer,” Rudd tweeted.

“These questions must be answered clearly and definitively to ensure public confidence in the vaccine strategy, especially given Morrison’s failure to meet his targets. It’s no use pretending these questions aren’t being asked. Australians need reassurance through proper answers,” he said.

Globally, the vaccine rollout is also looking patchy among the wealthier countries, with media reports today that French President Emmanuel Macron may be set to order a third national lockdown, after infections have risen sharply and vaccinations fail to gather speed, “amid the disarray” caused by suspension in some nations of the AstraZeneca vaccine.

About 8.3 million people in France, or 12 percent of the population, had received at least a first shot of the coronavirus vaccine, compared to the United Kingdom having vaccinated 46 percent of its population and the United States 29 percent, according to data from The New York Times.

The Conversation tells a dramatic story. As at March 31, 574 million doses of vaccines have been delivered across 141 countries, just over a year after most nations went into their first lockdowns. But that still reaches just 3.7% of the population so far. 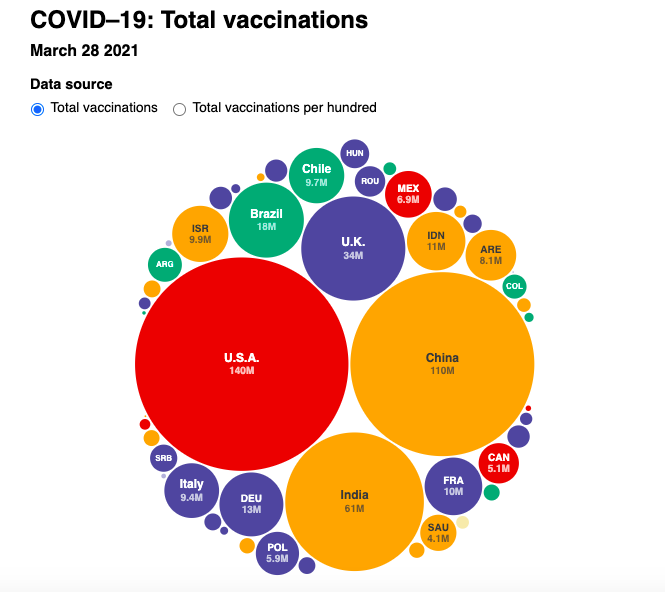 Its report says the US has administered the most doses so far in total, reaching President Joe Biden’s promise to deliver 100 million doses of vaccine by his 100th day in office approximately six weeks ahead of schedule.

India comes in next at around 61 million doses, with the UK also doing well on total number of doses given.

But The Conversation says adjusting the data for population sizes of countries, looking at the number of doses given per 100 people, puts Israel ahead by a fair margin. The United Arab Emirates, Chile, the UK, Bahrain and the US also doing well on that measure.

On current figures, Australia is “tracking poorly compared to the rest of the world” although it notes that our slow start will likely ramp up significantly in the coming weeks.

Gearing up in Alice Springs

However, many rollouts are going according to plan.

Alice-Springs based Central Australian Aboriginal Congress Congress said on Monday it had received the first vaccines designated under Phase 1B for staff and Aboriginal people over the age of 18, living in town and Congress-serviced remote communities in Central Australia.

“We’ve been gearing up for this for some time,” said Congress CEO Donna Ah Chee in a statement, urging community members to put up their hands for vaccinations following outstanding success at protecting Aboriginal and Torres Strait Islander communities from COVID-19 infection to date.

Vaccines and community immunity “are the way out of the pandemic, and the only way to keep our communities safe from the virus in the longer term”, she said, warning that “the potential for devastation in Aboriginal communities without being vaccinated is unimaginable.” 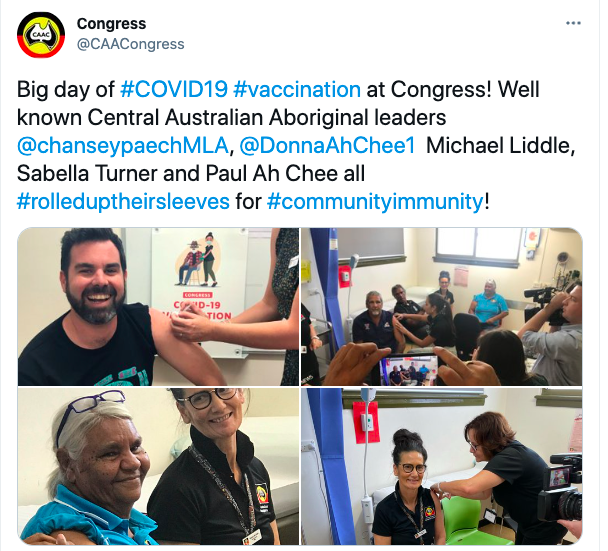 Congress said it was running a dedicated vaccine clinic for Aboriginal people from its Gap Clinic location, with access also from other town clinics at particular times and when patients come in for routine care, while vaccination for older, vulnerable and less mobile community members is being offered through outreach.

For people living in remote communities with Congress clinics, vaccines are being distributed to the clinics, and will be progressively available within the next two weeks.

“Getting a vaccine was really important to me,” said Aboriginal Health Practitioner (AHP) Lynnette O’Bree in the Congress statement.

“I have recently gone through some very serious health issues and having this vaccine means that I am taking away the risk of getting very sick from COVID-19 in the future. It means I can travel and live my life as normal.

“It’s also important for our community. Working in Aboriginal community controlled health service, I see so many of our people living with chronic disease. That means the risk of COVID-19 for them is very serious. I’m doing this for me, my family and my community.”