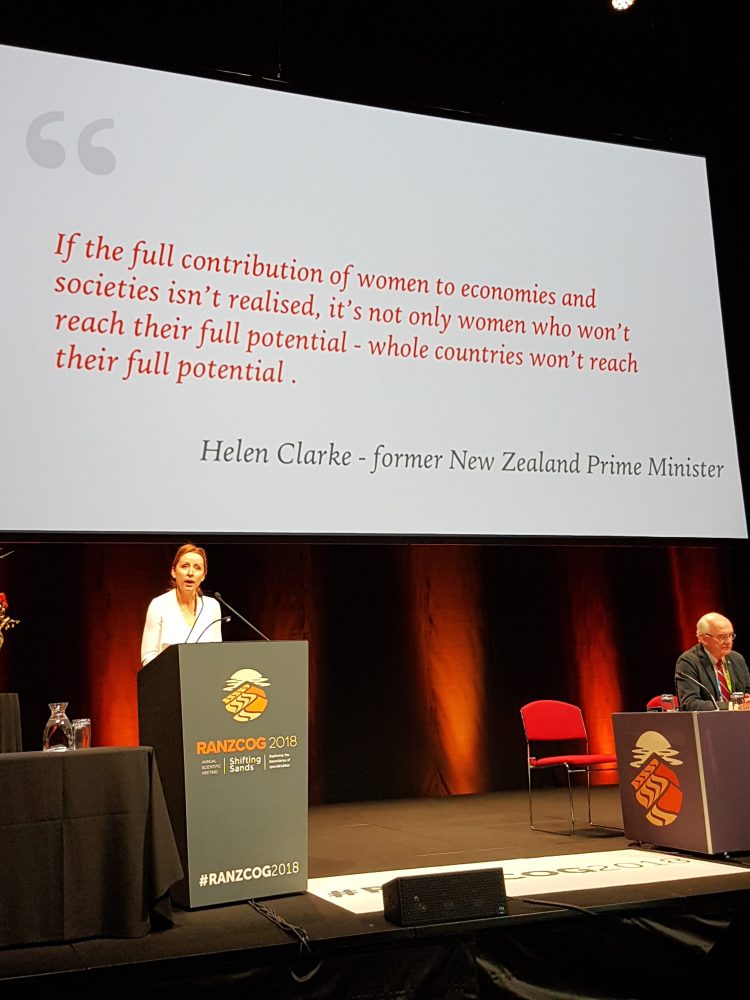 The Royal Australian and  Zealand College of Obstetricians and Gynaecologists (RANZCOG) has been urged to take action to tackle male dominance in leadership positions in a specialty dedicated to women’s health.

Research presented at the RANZCOG annual scientific meeting in Adelaide yesterday showed that men are over-represented in leadership positions within the College and the discipline more broadly, despite women being 63 percent of College members and 83 percent of trainees.

Hobart-based obstetrician Dr Kirsten Connan, presenting the findings of her Masters in Clinical Education research, issued an impassioned call to arms for the RANZCOG to confront a startling gender gap in positions of power.

Affirmative action, including quotas for women in leadership positions, was needed, she said.

Since the College’s inception, only one of 10 past presidents had been female, one of seven board members was female and nine of 29 seats on the Federal Council were occupied by women – the latter number remaining unchanged in a decade. This was despite College membership being 63 percent female and women trainees outstripping men for more than two decades, now by a significant margin.

Women occupied little more than a third of institutional leadership positions within the discipline, including university and hospital heads of department, with the notable exception of New Zealand’s North Island and Auckland City Hospital (100 percent female-led) and Westmead Hospital in Sydney (80 percent).

The only areas where women outnumbered men in O&G leadership were in the so-called ‘softer’ area of education — 71 percent of the College’s training and assessment state chairs and 53 percent of integrated training program leads were females, said Connan.

Connan discussed what she described as the “leaky pipeline” which had allowed this problem to take root, with the sheer numbers of new female trainees offering a false sense of security that the problem was on its way to being solved.

But the pipeline was far from sound, with workplace cultures implicitly and explicitly discriminating against women. The so-called “motherhood penalty” for women leaving the workforce to have children saw people lost from the system.

As part of her research, Connan surveyed the entire College membership for their views on gender barriers and solutions. Respondents commonly cited time and financial pressures as a disincentive to seek leadership, and these were more pronounced for women, who said they also had to fight the assumption that they were less capable or committed due to competing family demands.

Others described an “old boys club” network where ascendancy was predetermined: a conservative hierarchy dominated by male private practitioners that was not representative of the broader College membership.

Women who were chosen for leadership roles were often those perceived as non-threatening and unlikely to advocate on behalf of the majority, another respondent remarked, while still others called for shorter leadership terms and faster turnovers to keep the College dynamic and give more people opportunities.

One of the most striking themes was how gender affected perceptions of ability, and how ‘male’ qualities – strength, decisiveness – were equated with good leadership. Women were seen as less credible because they were more willing to compromise, and these assumption was internalised by women themselves, making them less likely to nominate for leadership positions, Connan said.

RANZCOG is not alone among trans-Tasman specialist medical colleges confronting gender disparities – it was a prominent issue at last year’s annual meeting of Australian and New Zealand emergency doctors.

But as as a specialty focused on women, with the most heavily female trainee cohort of any discipline across the two countries, Connan said the College was in a “unique position”.

If RANZCOG simply relied on the pipeline – the status quo – to offer solutions, Connan said gender equity at Federal Council level remained at least a decade away, and much longer for more senior positions.

Affirmative action, including quotas for women in leadership positions, was what was required for meaningful change. In an interview following the session, Connan said:

I believe now’s the time for RANZCOG to embrace quotas.

It’s not the only tool, but it’s a really well-proven effective tool that works really quickly, and I think that’s the challenge that we need to embrace.

We can keep having the conversation, but eventually we have to put some really practical pragmatic steps in place, and quotas would be one of those.”

She also called for RANZCOG to draft a gender equity action plan, including targets and timelines, and to formalise mentoring for women interested in leadership roles.

Without buy-in and involvement of both men and women at every level of the College, Connan said O&G risked becoming a “second tier specialty” too easily dismissed as a special interest group for 50 percent of the population.

Among respondents to Connan’s survey, representing one-third of the College membership, there was a definitive opposition to quotas, with the strongest resistance coming from male specialists and, interestingly, female trainees.

Overwhelmingly, responses to the question urged that appointments be made on the basis of merit, but Connan said this failed to consider that what merit looked like was in fact a very gendered concept.

She cited data showing that when paper authorship was blinded in journals, it resulted greater gender and ethnic diversity, and the use of blind auditions to address gender bias in orchestras, illustrating that merit could have an implicitly gendered dimension. She said:

It’s a conversation that we’re hearing all the time that people tend to hold in opposition quotas and merit but actually we know that meritocracy is a really difficult thing to define, for most of us it actually comes from the background of privilege as opposed to true merit.

I think if you unpack some of the cultural considerations behind what merit is, actually you will find that in O&G actually pretty much everyone has equal merit in terms of being supported through the process of leadership learning.”

Among respondents to Connan’s survey, female specialists were significantly more likely to want a future leadership position than their male counterparts and to report barriers to these plans.

Half of all those surveyed – overwhelmingly Fellows from Australia aged 30-60, 58 percent of whom were women – reported experiencing gender bias and, again, this was more prevalent among female specialists and trainees than their opposite number, as well as being more common among trainees overall than senior colleagues.

Respondents to Connan’s survey also had some suggested solutions, including job-sharing of leadership roles, decentralisation and the ability to teleconference into meetings, stipends to cover travel and childcare, female sponsor networks and a concerted campaign to increase female participation.

For women in the College, she had a very simple message: seize the day. Instead of waiting to be more experienced, more qualified, more perfect, it was time to banish the impostor syndrome and take the first steps into leadership.

And for the College itself, Connan said it was time for an “awakening”, describing equity as a social justice issue.

“The issues around gender bias, both implicit and explicit, and gender barriers have been there for a long time, and I think as a community we are now working towards having the conversation. I felt that it was time within RANZCOG to have that conversation as well,” she said. 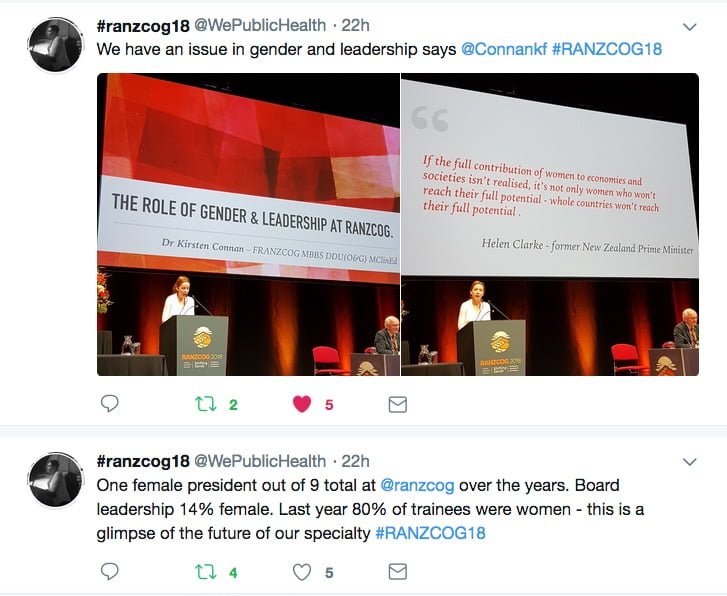 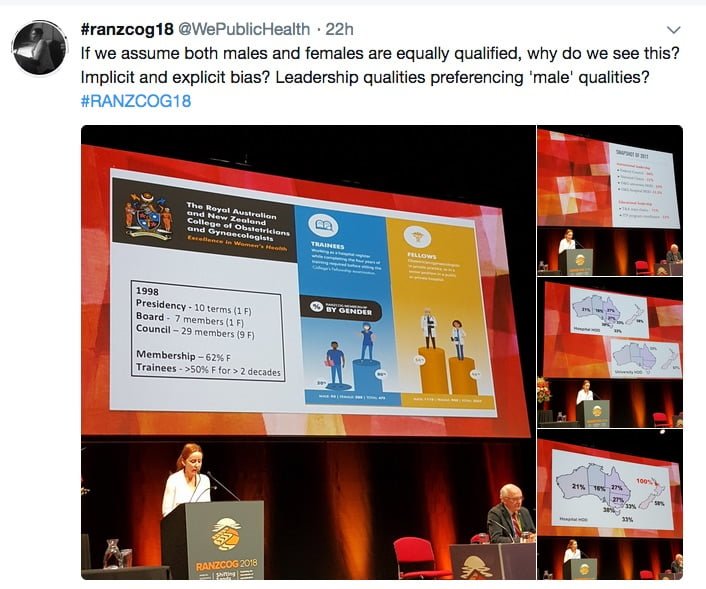 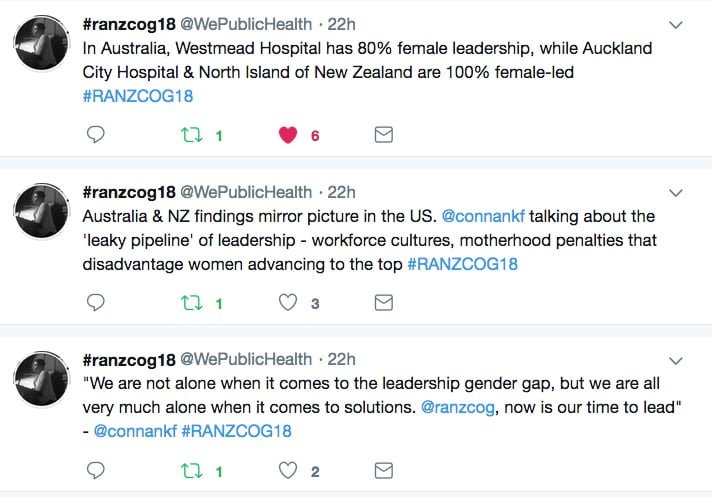 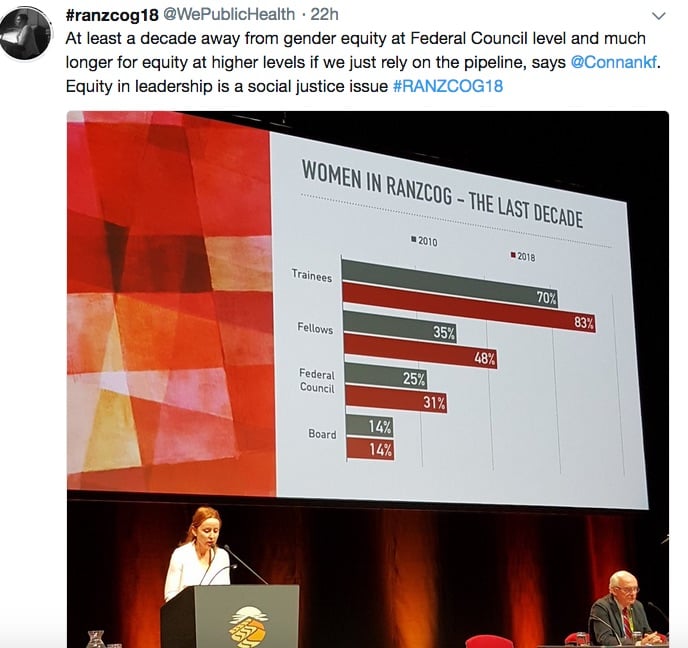 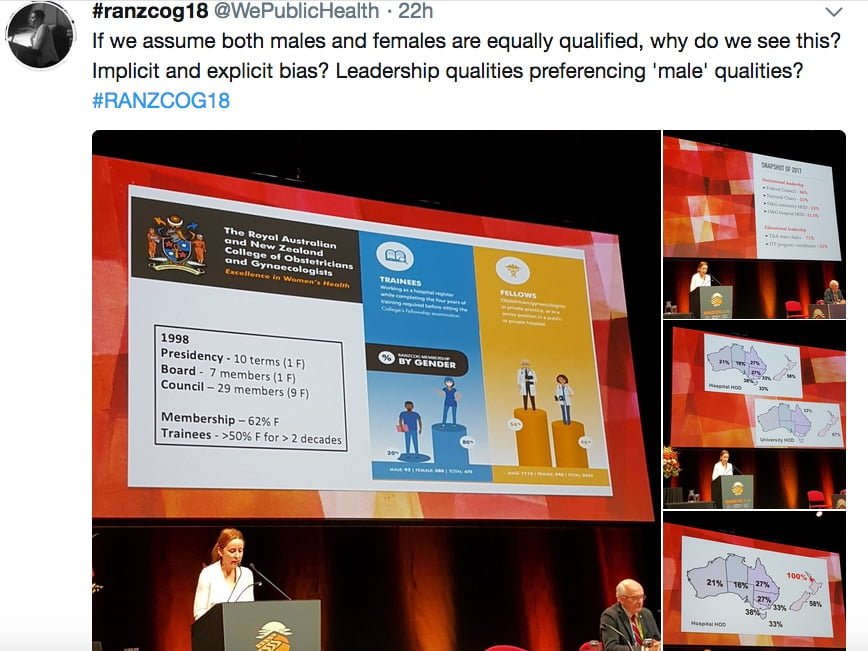 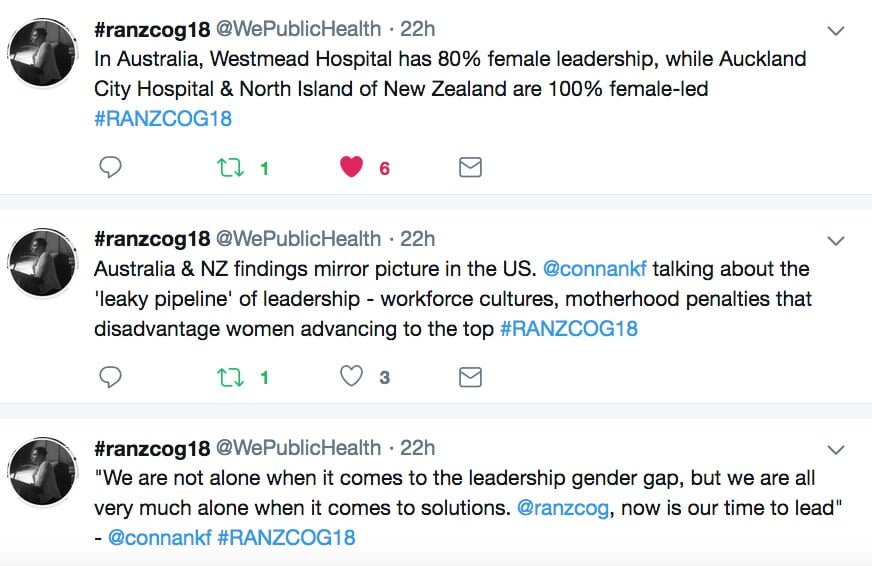 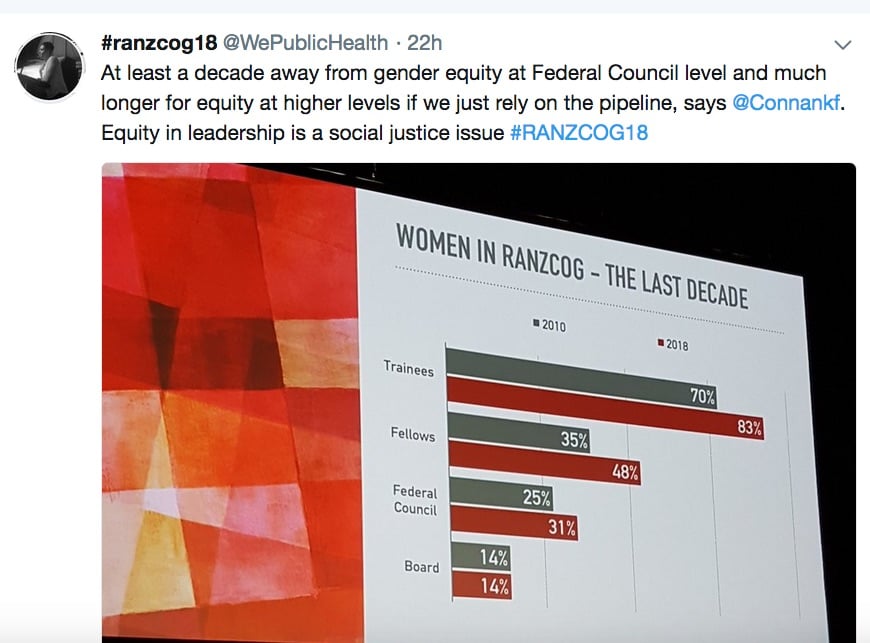 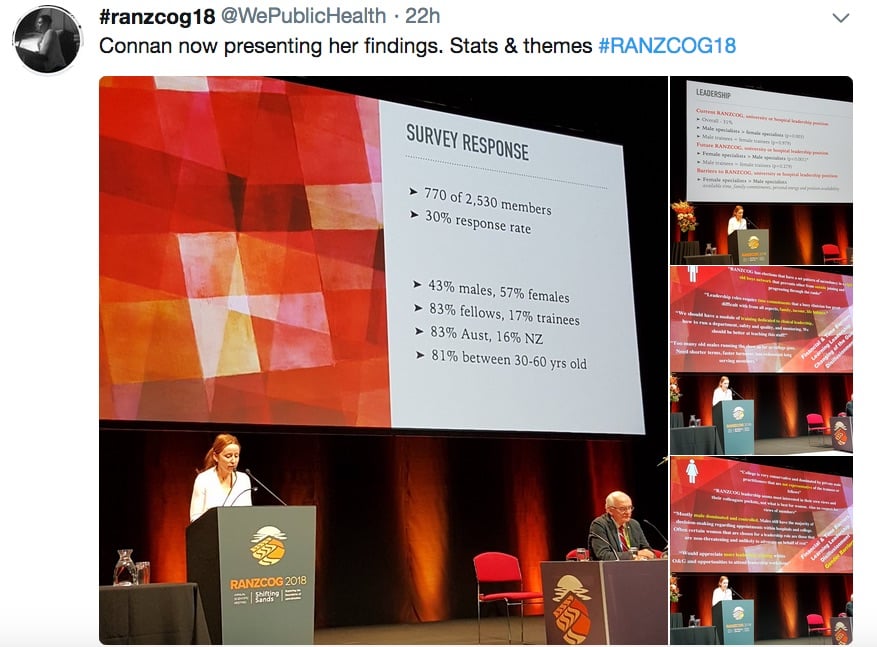 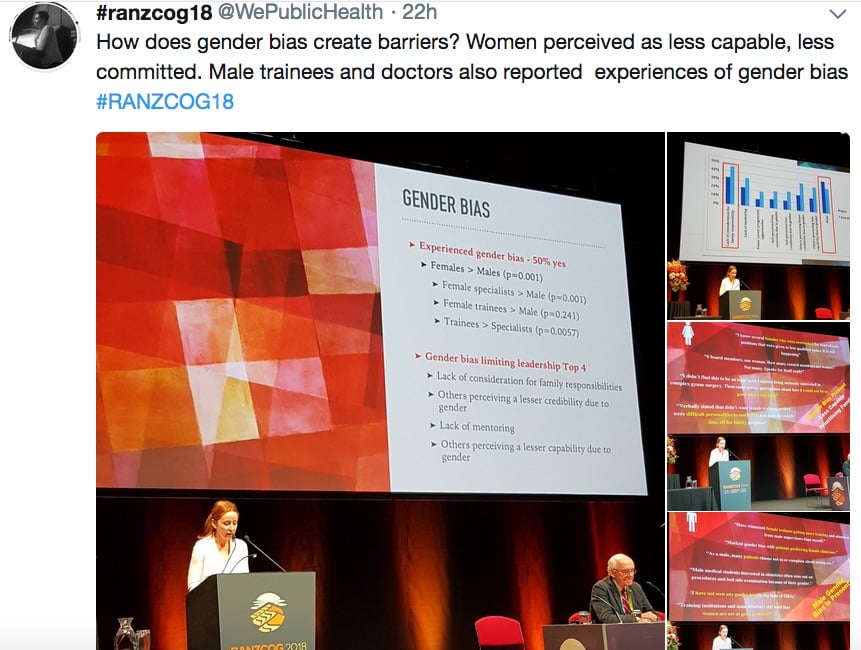 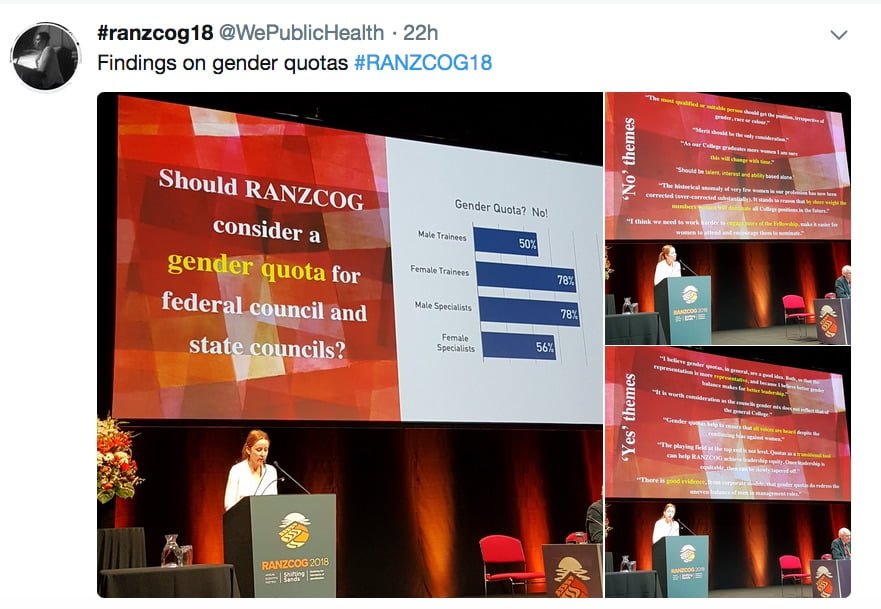 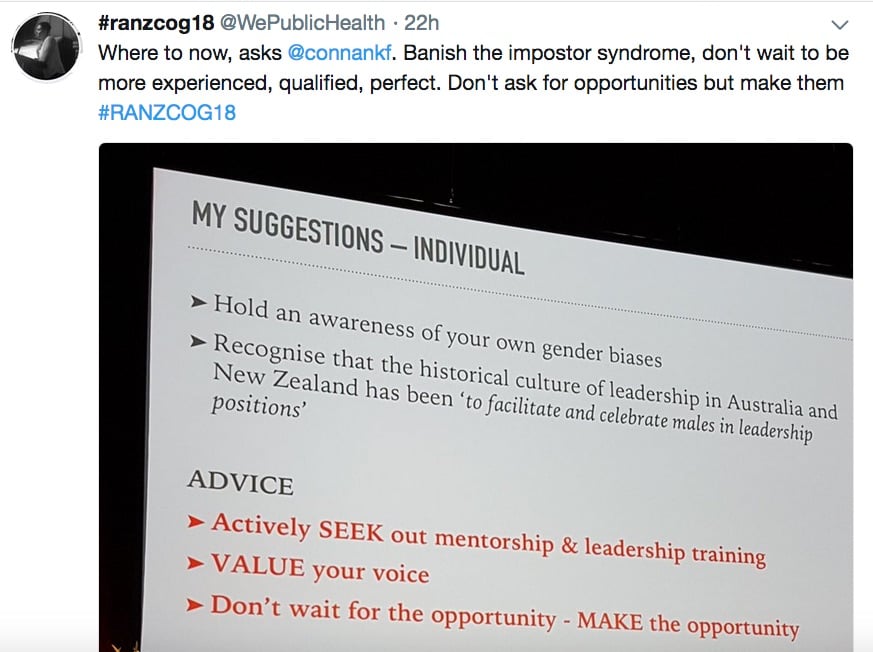 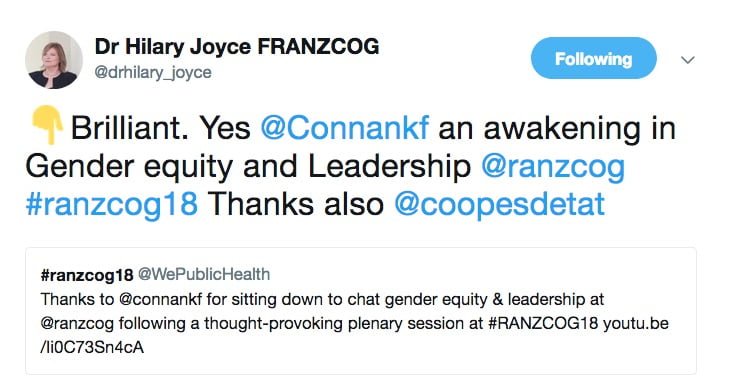 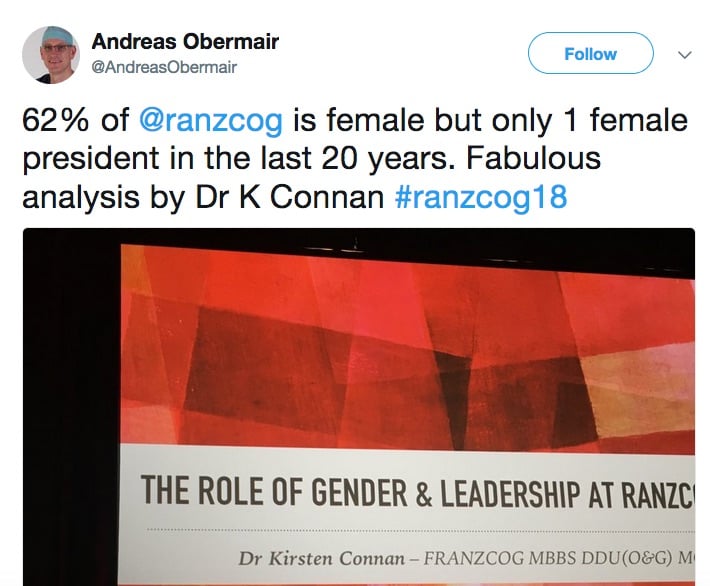 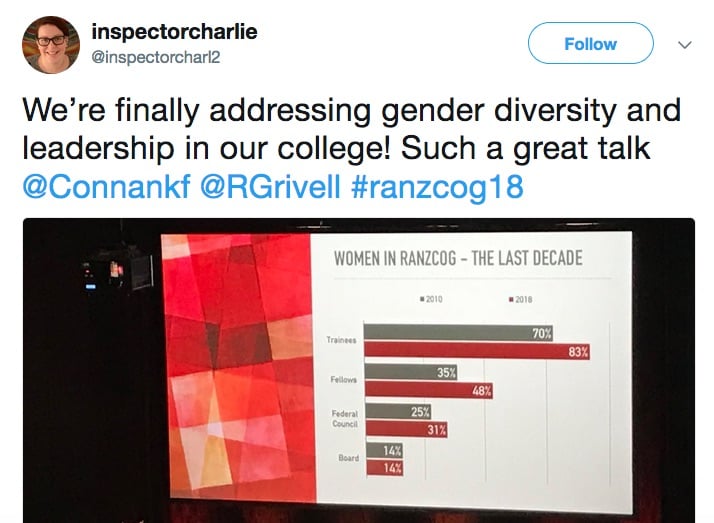 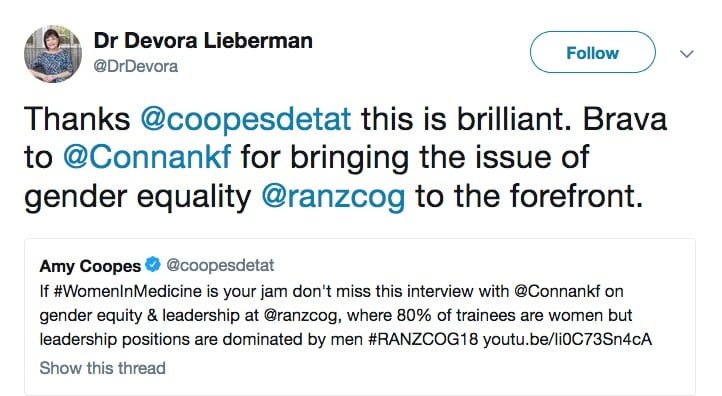 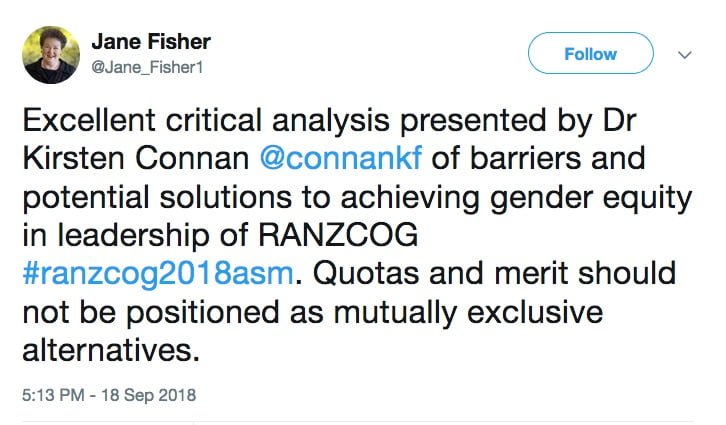 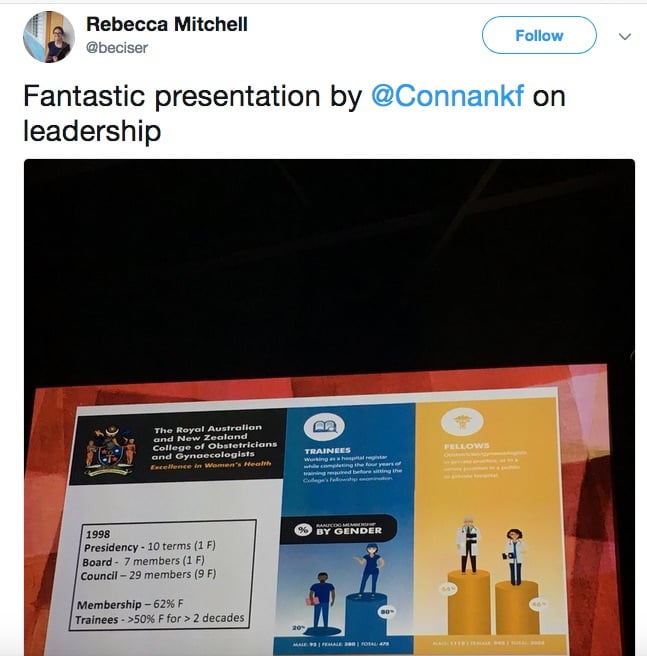 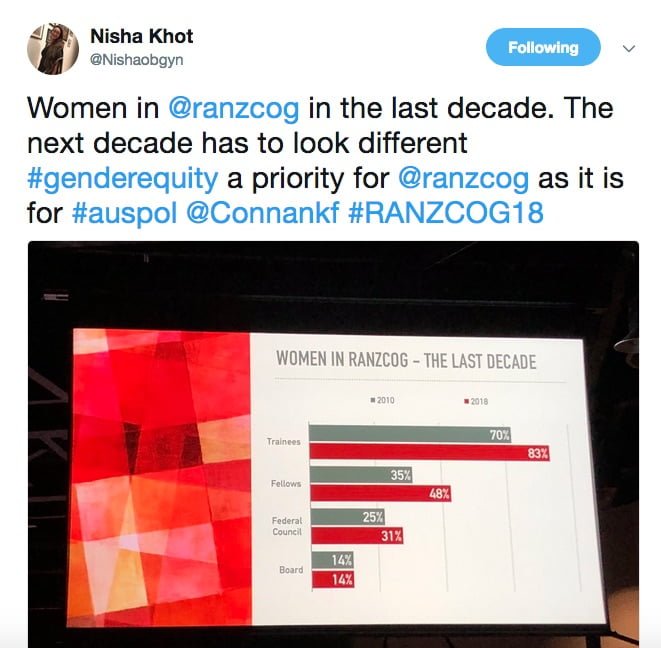 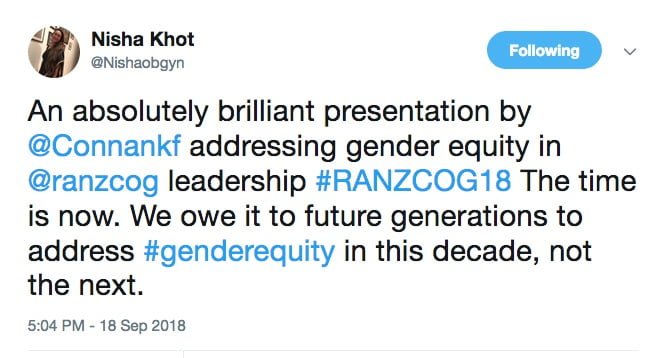 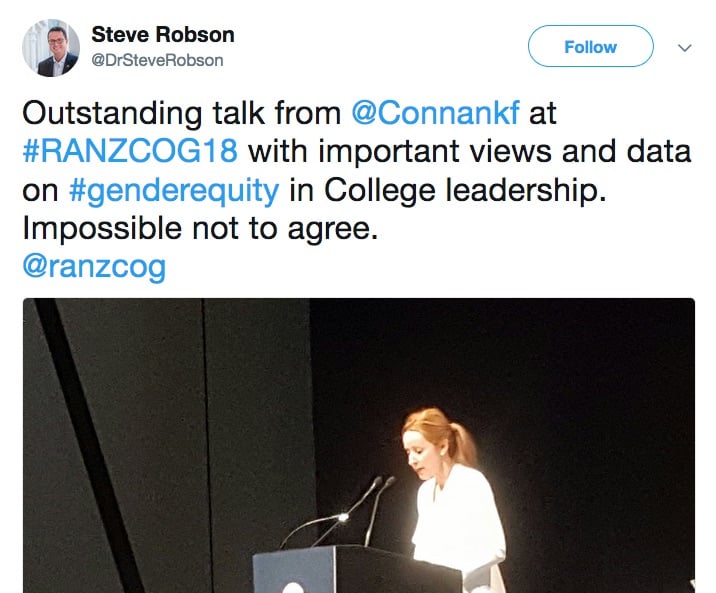 • Amy Coopes is covering #ranzcog18 for the Croakey Conference News Service. Bookmark this link to follow our coverage.

PrevPreviousOn the road (for 900 kms) to a nuclear ban treaty: ICAN urges Australia to sign up
NextAMA “demands” Fed Govt moves asylum seeker children and their families off #NauruNext