Can bloggers help to change our drinking culture? Is alcohol your best friend? And a few other questions still to be answered…

In a freezing cold Parliament House courtyard on a recent Monday, an intrepid group of public health workers, politicians and advisers gathered to talk about drinking, not drinking, blogging, and changing the culture around alcohol ‘one Sunday at a time’.

The occasion was the launch of a report on the social effectiveness of Hello Sunday Morning (HSM) (a project covered briefly in a previous Croakey post).

HSM is a social media initiative  — or, as it was described at the launch, a ‘health communication initiative’ – in which individuals commit to going without alcohol for a specified period of time (typically 3, 6 or 12 months) and blog about their experience. 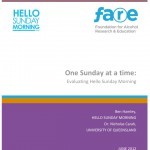 The launch marked the beginning of alcohol-free periods for two Members of Parliament:  federal Shadow Parliamentary Secretary for Primary Healthcare, Dr Andrew Southcott, and Greens Health Spokesperson, Senator Richard Di Natale.  (According to the Foundation for Alcohol Research & Education, which funded the report, the Government declined an invitation to participate in the launch.)

HSM was founded by the young Chris Raine, who wondered if the Sunday morning hangovers were really worth the personal and societal costs.  Having been involved in youth social marketing campaigns, Raine decided to spend an alcohol-free year as a way of gaining a better understanding of young people’s relationship with alcohol.

Unlike other social marketing campaigns with a pre-determined message, HSM creates its messages through each person’s stories and languages. Through the blogs, each participant ‘owns’ his or her experiences and is accountable for reporting on challenging and accounting for progress.  The blogs become both a personal reflective space and a space for sharing ideas, strategies and critiquing drinking culture more generally.

HSM has now had more than 4 500 participants (HSMers), mostly in Australia but increasingly in other countries.  Data suggest that just over half of HSMers are over the age of 30, and almost 6 in 10 are female.  The report was based on the the blog posts of 1 768 HSMers, plus limited survey data.

The report provides glimpses of HSMers’ experiences.  For example:

‘At one point I was standing, obviously without a drink in my hand, observing everything going on. Someone asked me whether I was driving. I said I was and asked why he’d asked me that, He said it was because I had a driving look on my face.… I made a mental note to try and make sure that no one asks me that question again.’

It would have been tempting to have responded to that post by suggesting that it is useful to always keep a drink of something – even water – in your hand, as seeing someone without a drink actually makes other people uncomfortable.  ‘A glass in your hand,’ I would have written, ‘signals that you are part of the group and are having a good time. ’

Parallels with other public health issues

Although HSM is about alcohol, there are interesting parallels with other public health issues, like smoking and obesity.  One HSMer’s talk about ‘relapse’, after 2 weeks of not drinking, had echoes of the set-backs that many smokers face in their attempts to quit.

Like relapsing smokers, the HSMer blogged about the morning after her drinking episode as a reminder of ‘why I started this challenge in the first place. What a waste of a day!’

Another blogger, writing 6 weeks after completing a 3-month HSM, talked about alcohol in the same way that smokers referred to cigarettes in Finding the Strength to Kill Your Best Friend.[2] Explaining about the loss of a friend, the HSMer wrote:

‘I found that when I did drink again I was disappointed. Alcohol had lost its magic … Now I am grieving for my lost friend, alcohol…’

In one HSMer’s reflection about the emotional drivers of drinking, there are also parallels with emotional eating:  Try substituting the word ‘food’ or ‘chocolate’ for ‘drink’ in this blog, written after one month of sobriety:

‘Drinking is something I do when I’m by myself and feel like I’ve failed at something, feel like I can’t make a right decision or when I’m feeling disappointed or hurt. … Those are times when I binge drink. It’s an emotional thing. … I think it’s a learned behaviour and a habit. I know from a young age I learnt that if you are feeling down, have a drink, it will clam you down, make you feel better.’

It would be an over-statement to call this report an ‘evaluation’ of HSM, as it is a limited analysis which leaves many crucial questions unanswered.

For example, there is no attempt to tease out the effects of the initiative’s two elements – the public commitment to an alcohol-free period, and blogging about it – so we can’t be sure what role each plays.  There is no socio-economic data about HSMers and there is no gender analysis (although I was advised that this may come later).

According to the report’s co-author, Dr Nick Carah, of the University of Queensland’s School of Journalism and Communication, HSMers include a wide range of participants of all ages and background, with increasing involvement by women in their 40s and 50s.

It is probably too early to tell, at least without more rigorous research and follow-up, what the longer term impact will be – whether HMSers will continue to ‘assert new norms and values around drinking culture’ or whether, for some, continuing to stand up to the ‘aggressive kickback’ from friends will be too much.

The authors note that the findings do suggest a reduction in consumption and an increase in well-being over time, and they state that better data could be generated if consumption, health and wellbeing (and possibly demographic) information were gathered at sign-up and again at fixed points during and following the HSM process.

Overall, the research found that the HSM experience enables participants to ‘stake out their own views, be accountable for their own actions, and honour their own achievements and challenges’.

In many cases, the HSM experience becomes a catalyst for changing other aspects of an individual’s life, and reflecting on alcohol consumption is seen as a symptom of more fundamental problems in social and cultural life.

[1] Hamley B and Carah N, One Sunday at a time: evaluating Hello Sunday Morning. Foundation for Alcohol Research & Education, June 2012.

PrevPreviousA critical challenge for health reformers: how to hear from those with the greatest need?
NextIs the media juggernaut sidelining good policy in Indigenous affairs?Next