This month’s JournalWatch from Dr Melissa Stoneham, Director of the Public Health Advocacy Institute WA, looks at the research findings of a social media intervention aimed at addressing lingering concerns among a small group of parents around vaccination.

In June this year, a billboard in an inner city suburb in Perth caused a major stir.

The billboard (see photo below) comprised of an image of a woman with textbooks and the question: “Do you know what’s in a vaccine?” 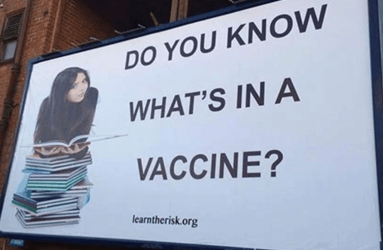 Classified as an anti-vaccination billboard, there were calls for it to be pulled down, with West Australian Health Minister Roger Cook investigating if powers under the Public Health Act could be used to do so. He declared:

“The anti-vaccine lobby are once again spreading dangerous misinformation, this time with an insidious billboard targeting concerned parents”.

Omar Khorshid. President of the Western Australian branch of the Australian Medical Association (AMA), said that the billboard was sowing the seed of doubt in people’s minds about the safety of vaccines.

The billboard received a large volume of air time in the media, was the subject of many tweets, was vandalised, and eventually taken down.

Vaccination continues to divide subsets of our population. As a public health advocate, my stance is crystal clear – everyone should be fully immunised.

Where do parents learn about vaccination?

The question is, where do parents access the information they need to make informed decisions about important life events such as vaccinating their children?

Many parents use the internet to research a myriad of childhood health and development issues. It is the norm these days. Research on the use of the internet as source of information for childhood vaccination has identified that those parents who are contemplating whether to vaccinate their children or not have complex information seeking behaviours.

The parent’s research and contemplation starts during pregnancy and it has been found that many vaccine-hesitant parents tend to distrust traditional sources of scientific authority and head to the internet to gain information about the pros and cons of vaccinating their newborns.

In this month’s JournalWatch, I review an article that describes a study that assessed whether an internet-based platform with vaccine information and interactive social media components improved parents’ vaccine-related attitudes.

Published in the American Journal of Preventive Medicine, the study lead Matthew Daley said the research was needed because parents often seek vaccine information on the internet, even before the 2-month well-child visit.

This is not a new field of study.

This study extended these findings to the United States, where little evidence is available about whether internet-based decision aids can improve attitudes about childhood vaccination.

In the research which was conducted in Colorado, 1039 parents in their third trimester of pregnancy were recruited using a combination of letters, postcards, e-mails and telephone calls.

The parents were then allocated to one of three study arms:

A multidirectional communication model served as the theoretic basis for the internet-based social media intervention and consisted of three components:

While the VSM study group received all three components, the VI group received only component 1. Routine paediatric preventive care was available to all participants in the three study arms.

The vaccine content presented on the password protected study website was pilot-tested and revised using focus groups and individual interviews with pregnant women and parents of young children.

The conceptual framework for the survey instrument was guided by the Health Belief Model and the Theory of Planned Behavior, and focused on encouraging parents to receive recommended vaccines on time while trying to adopt a collaborative and non-judgmental tone.

The questions are listed in the journal article and all content was clearly labeled and presented in short, easy-to-read sections, with information sources explicitly referenced and accompanied by hyperlinks.

The survey was given to parents at three timepoints:

Reminders were forwarded if needed and a small financial incentive was provided upon completion.

Via the study website, the VSM group, which totaled 542 participants, had access to a range of social media formats including a blog, an “ask a question” portal, a discussion forum and chat room.

Parents could ask detailed questions of the vaccine subject matter experts and receive tailored responses within a few days. These platforms were well used with 59 blog entries, 31 chat sessions and 90 comments and questions. Parents were also emailed monthly newsletters directing them to the website, highlighting website updates and providing additional vaccine content.

Comparing baseline with Timepoint 1 among vaccine-hesitant parents, the VSM and VI (n=371) arms were associated with significant improvements in attitudes regarding vaccination benefits compared to usual care.

Comparing baseline with Timepoint 2 among hesitant parents, the VSM and VI arms were also associated with significant reductions in parental concerns about vaccination risks compared to usual care.

This study wanted to establish if interventions that changed not only vaccine attitudes but also vaccination behaviours could be achieved.

Overall, this study found this was possible. The intervention was effective among vaccine-hesitant parents, whether interactive social media components were included or not.

The researchers concluded that through the interactive discussion of the topic online, and in-person with family and friends, parents can contribute to the broader public discourse and help define social norms regarding the importance of vaccination.

An acknowledgement of the ongoing nature of an intervention such as this was discussed in the article and included the need to update the study website, creating new content, moderating the chat room and discussion forum, and directly responding to participants’ questions.

Yet this investment certainly seems worthwhile.

With only around 93 per cent of young Australian children fully vaccinated, the existence of non-vaccinated hotspots like Mullumbimby and Fremantle, and with anti-vaccination sentiments still prevalent in our society, it makes sense to continue to expand the policies and programs in this important area.