Home Healthcare and health reform non communicable diseases Can we eat, tax and subsidise our way to a healthier future? Here’s a FeastOfIdeas to consider, including a sugar tax 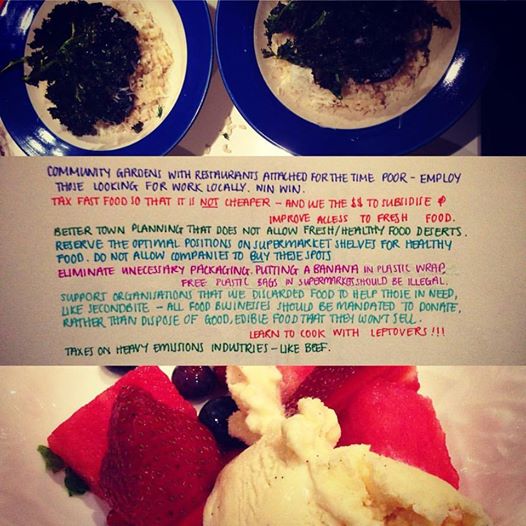 From the Melbourne #FeastofIdeas launch

Can we eat, tax and subsidise our way to a healthier future? Here’s a FeastOfIdeas to consider, including a sugar tax

Pressure is growing on the Australian Government to impose a sugar tax on soft drink, with Ireland announcing one to take effect next year and a new report by the World Health Organisation (WHO) supporting the case.

The WHO report ‘Fiscal policies for Diet and Prevention of Noncommunicable Diseases (NCDs)’ – released on World Obesity Day – concluded that appropriately designed taxes on sugar sweetened beverages would result in proportional reductions in consumption, especially if aimed at raising the retail price by 20 per cent or more. It found similar strong evidence that subsidies for fresh fruits and vegetables that reduce prices by 10–30 per cent are effective in increasing fruit and vegetable consumption.

“Half of Australians are living with one or more chronic diseases and 1.2 million Australians have diabetes, 85% of whom have type II diabetes. We cannot ignore these statistics any longer and need to act now to ensure a healthy community. A sugar tax is a no brainer.”

“Not only are soft drinks harmful in terms of diet but they are a major factor of poor oral health, yet Australians drink them by the litre every day. By putting a tax on soft drinks, Australians will be more likely to choose cheaper, healthier options which will result in less sugar being consumed.”

“The Government have reduced funding for prevention initiatives from 2.2 per cent to 1.4 per cent since 2008 while obesity rates continue to rise. Investing in prevention is paramount to good public health for all Australians and with initiatives like a sugar tax we can make a health difference to the health of the community.”

Meanwhile it’s not too late to join in true food for thought with NCDFREE, a not-for-profit campaign for a world without preventable noncommunicable diseases.

The group is encouraging dinner parties with a difference around the world in October. The #FeastOfIdeas started off with launch events in Melbourne and London, and another on Wednesday at the Uppsala Health Summit in Sweden, and has registration from people in Mexico, Saudi Arabia, Norway, Denmark, Indonesia, Peru and Paraguay .

In the post below, NCDFREE Global Coordinator for Australasia Juliette Wittich outlines how the initiative aims to give people an opportunity to use food to address the challenges of noncommunicable diseases (NCDs). We thank her also for the pix from the launches (above and below).

The United Nations General Assembly has declared that we have entered the Decade of Action on Nutrition. Jamie Oliver calls it a Food Revolution. The EAT Initiative are challenging us to do it sustainably, even in some of the world’s largest cities – but to NCDFREE, it’s all going to start with a Feast Of Ideas.

What we are putting in our mouths and on our plates is globally gaining recognition as the key to unlocking a healthier, more sustainable, and fairer future. What we eat, how we’re eating it and the journey that it takes from production to consumption is leaving a mark on our bodies and our planet.

It is estimated that up to 31 per cent of greenhouse gas emissions are caused by our food systems – a greater impact than transport systems for sea, land and air combined. As Australians, we are responsible for a whopping 1.4 per cent of this, despite having a population of just 24 million people. In September, we received the uncomfortable news that we may have surpassed the 400 parts per million threshold.  A threshold that was previously thought impossible, achieved in our lifetime.

Despite the fact that nearly one in three mouthfuls of food is wasted, new modelling from the University of New South Wales suggests one in three Australian adults are predicted to be obese by 2025. Meanwhile, one in nine of our global neighbours will remain subject to hunger and malnutrition. With such an imbalanced picture, it’s clear that we need to start sourcing solutions, and enacting change.

In 2015, the United Nations mapped a new pathway towards development and prosperity by 2030 with their Sustainable Development Goals. Of these 17 global goals, it is estimated that 12 to 15 are reliant on a global appetite for addressing inequities in our food system.

If we are to build a better food system, people from a variety of backgrounds must have a seat at the table. This has been difficult for high-level policymakers to achieve, ironically paradoxical to the universality of food.

Food is human. It is embedded in our social and cultural systems. It is often the focal-point of our communal experiences and ceremonies. Yet when we speak about how much needs to change in order for our diets to straddle the parameters of healthful and sustainable, it’s rarely as a collective.

#FeastOfIdeas hopes to change this. Throughout October, 200 dinner parties will be hosted around the globe by a diverse range of communities. Academics, policy institutes and civil society will come together over a shared meal.

They will be provided with a guide to cooking seasonally, minimising their waste and reducing their meat intake (three easy steps we can all take to drastically improve the environmental and physical impact of our diets) and tackle the same big questions, tabled by leading voices in food advocacy and action.

Author Professor Michael Pollan will ask us how we price food equitably to represent its land and human cost. Dr Kevin Strong, founder of the Dunk the Junk initiative, will ask for strategies to decrease sugar consumption, with careful attention to nations whose public health systems are less equipped to defend against food marketing.

Every solution will be submitted via the campaign hashtag #FeastOfIdeas on Facebook, Twitter and Instagram to be collated into a crowdsourced mega-menu for change. This will be presented at the closing dinner party in London, to a guest list that includes Jamie Oliver’s Food Revolution, the World Health Organization and the Global Nutrition Report. Through innovative opportunities, workable ideas will flourish from setting an open table for discussion.

It may seem like a small thing to encourage a few thousand people to discuss food over a meal, but it is an important beginning. If we cannot discuss food as a crucial determinant of physical and environmental health, what hope is there of exploring its more complex relationships?

The impact of malnutrition on the educational attainment of young women and girls also has crucial implications for our abilities to address gender inequity. The Global North’s taste for fresh and canned tuna has resulted in overfishing in the Pacific that has created both an economic fallout and a growing crisis of noncommunicable disease. The palm oil in that innocuous chocolate bar we rely on to get through the 3 o’clock slump is devastating a once thriving tourism industry and displacing native peoples in Borneo.

We can’t afford to be complacent anymore. By the same token, we shouldn’t despair or expect that the solutions to our greatest challenges can only be found in the hallowed halls of our most powerful.

Often, when we approach a multi-faceted “wicked” problem (of which, the intersection of food, climate and health is certainly one), we believe the impetus must be to incite urgent and sweeping change. This ignores the power of humble improvements at a human scale. For instance, for those of us who have the luxury to choose, adjusting what we put on our dinner plates.

With nearly 7.4 billion dinner plates at our tables, the opportunity to adopt small changes that add up to significant solutions is immense.

So grab some friends, set a date, and sign up to help solve our biggest food-related health and environmental challenges in the most delicious way possible – over a shared, locally-sourced, nourishing meal. There is a seat for everyone at the #FeastOfIdeas table. 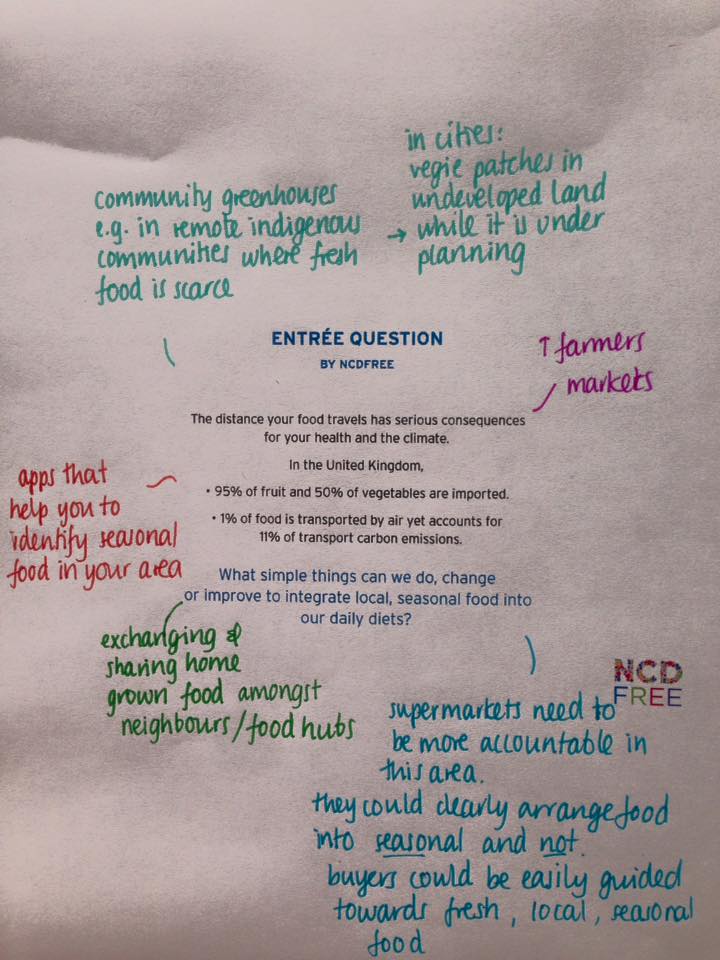 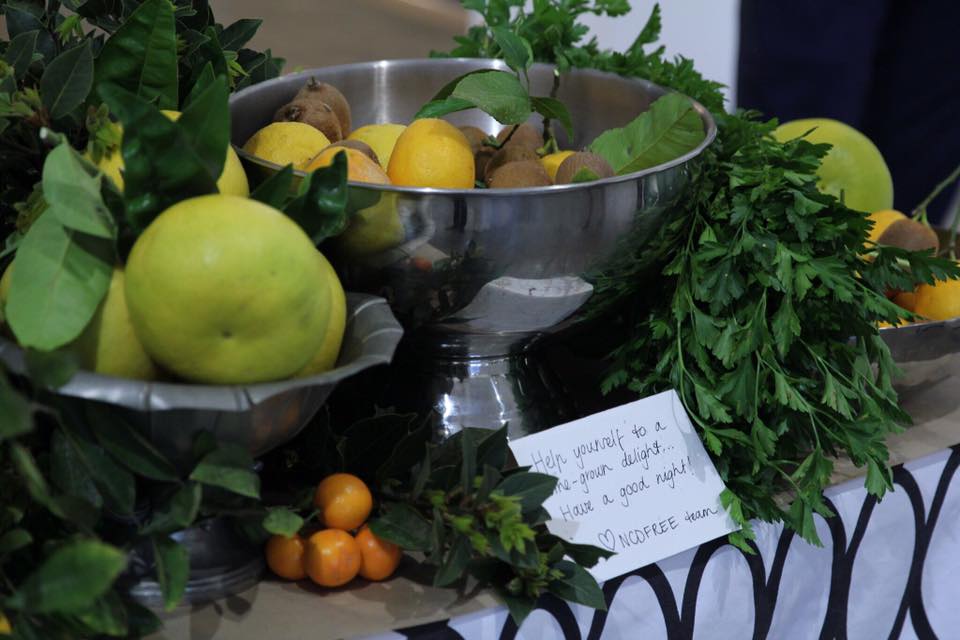