Welcome to the second in our 2016 #TalkingTeeth series on current issues in dentistry and making dental health available to all.

Thanks to the team at the International Research Collaborative – Oral Health and Equity at The University of Western Australia, who are some of Australia’s leading experts and graduate students driving innovation in dental public health in Australasia, for contributing this series for Croakey readers.

This month Inderjeet Sohal, Estie Kruger and Marc Tennant look at Canberra as a case study in ‘relative zero’ for dental health.

Australia has some really interesting public health experiments that happen spontaneously, due to the nature of our distributed geography.  “Experiments” that were never really experiments, but turned into neat vignettes of the advances we have made in health, and also provide indicators for the future directions.

Canberran children’s teeth are just one such case.

What an interesting place the Australian Capital Territory (including Canberra) is. With a total area just over 2000 square kilometres, it is a relatively tiny, self-governed area of Australia. It is fundamentally a single city Territory, with a total population approaching 400,000 people.

Census data (2011) reveals what is most evident of the population: it is extremely warped to relative socio-economic advantage, or “wealth”. Over 90% of the population is in the wealthiest 30% of the Australian population and only 0.3% are from the poorest 10% nationally.  Even more extreme is the relative distribution when you look at school age (0-14 years inclusive). 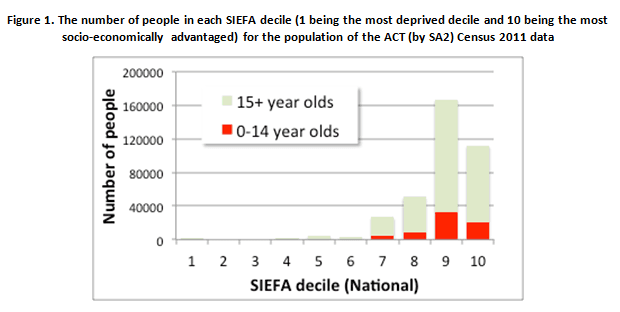 Being such a small Territory has advantages.  Reticulated water supply is extensive with nearly 100% of Territorians having access to reticulated water.  Since 1964 water fluoride levels have been managed to be optimal for dental health, in accordance with the Territory public health Act, and in keeping with federal recommended guidelines.

Territorian school children have access to a universal school dental service.  At highly subsidised rates the government service is accessible by all children right through to 14 years of age. This service has been active for many years and provides preventive, basic restorative care and a monitoring system for referral if specialist services are needed. 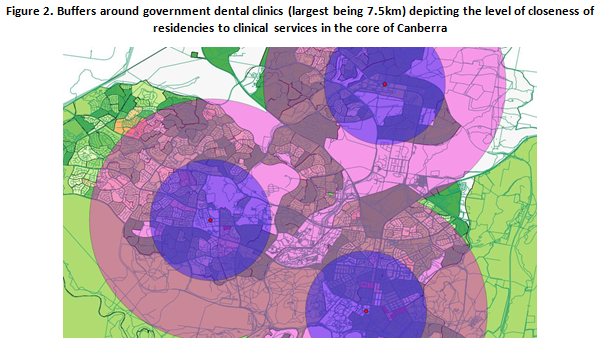 And, on top of this government care open to all, if a family chooses to use private dental services for their children, then the ACT has a good distribution of private dentists.  Unlike rural and remote Australia, Canberra and its associated areas have a number of private practices (Tennant and Kruger 2013)* and now the federal government provides a subsidy scheme to allow children subsidised dental care through these access points.

If we reflect back on dental decay and the key public health indicators of disease risk in a population, poverty, access to appropriate fluoride concentrations, and access to care, there is arguably not a more positive enclave of optimisation of these variables anywhere in the world.  Canberra is a wonderful natural experiment of public dental health.  A highly wealth skewed population, fundamentally fully covered by optimised water and having access to highly subsidised care.

The core question is: how good is the dental health of children under these conditions? Surely with these variables maximised we must be at Absolute Zero?

Interestingly, no.  The prevalence of dental decay (ie the proportion of children [12yo] with decay) hovers around 45%, and the incidence (ie the amount of decay suffered by each individual) hovers around a DMFT of 1 (Ha et al., 2011)*.

Clearly, an argument that we have talked about more recently is that the measures are probably not ideal when decay has diminished to such a low level in a population, but at this stage these are the measures the governments of Australia continue to support.  We can also argue that we might not like the sampling systems of the data too.

But, putting aside the technical arguments, what we do see is that there is no such thing as Absolute Zero when it comes to a chronic, complex, and multifactorial condition such as dental decay.  There is never going to be “the last case” as was seen with smallpox and alike.  When this is accepted you then move to a framework of relative zero.

Is it time that we say: “Canberra you are have reached relative zero for dental decay in children, and we refocus our efforts to other subgroups that need advancing”.  Do we, as a nation, set a relative zero mark and celebrate when we achieve that line?  This does not mean stop, (to sustain relative zero still requires effort), but at the same time the cost-return of trying to push from relative zero to absolute zero could be argued as not a good use of limited resources.

So if we take Canberra as the line of relative zero, how does the rest of the nation stack-up?  Data that many of us do not agree with, nor consider reasonable (for discussions elsewhere), but were measured on the same parameters and processes as in Canberra, brings us to prevalence data as seen below. Incidence data is not that different between States and Territories either. 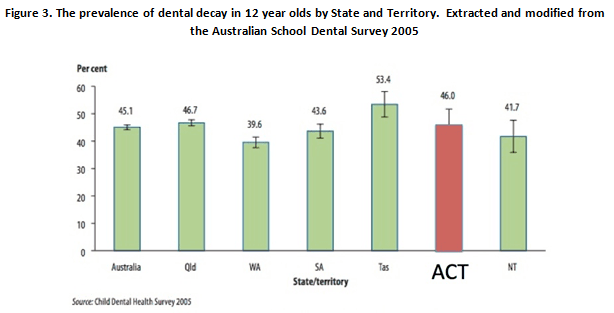 In summary, we all appear not that far away from Canberra now.  But the devil is in the detail that is not included these measures.  Such enormous strides have been made for the vast majority that it now masks the few.  But, that’s the point.  Let’s celebrate the grand success of two generations or more of effort to address childhood decay and target efforts to specific subgroups.

Canberra is a wonderful dental public health “case study” that clearly gives us insights into the achievement of relative zero.  A line in the sand for celebration.  We need leadership to look, learn and move on to new innovations that advance the health of those that remain at risk.

Authors Inderjeet Sohal, Estie Kruger and Marc Tennant are from the International Research Collaborative – Oral Health and Equity at the Department of Anatomy, Physiology and Human Biology, The University of Western Australia.