Australia’s cancer screening programs have successfully reduced the burden of cancer on our community but it is important that we continue to question their role and evaluate their performance.

Are the existing programs achieving their maximum potential? How can we build on their success to improve future outcomes? Which groups in Australia are missing out on the benefits of these important programs?  What other cancers might benefit from a more systematic approach to screening and testing?

The latest edition of Public Health Research & Practice explores these and other important questions about the future of cancer screening in Australia through a series of articles by leading cancer researchers and screening experts.

The key findings from this edition are summarised below.

For a cancer to be suitable for a screening program it needs to satisfy three key criteria: 1) be a disease with a latent or early stage; 2)  have an acceptable means of finding the cancer or precancerous condition early; and 3) have an available and acceptable treatment that can demonstrably change the expected outcome.

Australia has established three population screening programs for cancers that meet these criteria: the National Bowel Cancer Screening Program (NBCSP); BreastScreen Australia; and the National Cervical Screening Program (NCSP).  All three programs have successfully prevented the impact of cancer on their target populations but also face challenges in their design and/or implementation.

One specific challenge facing all of these programs is their lower-than-desired participation rates, especially in communities that are hard to reach.

In fact, all three programs are falling significantly short of the target 70% participation rate:

This low participation rate is concerning as it reduces both the overall outcomes and the equity of our investment in cancer screening.

Data from the Australian Institute of Health and Welfare shows that there are major differences in participation rates between different geographic areas. For example, the Primary Healthcare Network (PHN) with the highest participation rate for BreastScreen Australia was Northern Sydney (64%), almost 20 percentage points higher than the PHN with the lowest rate, the Northern Territory (46%).

At the Statistical Area 3(SA3) level, there are even larger regional differences, even between communities of similar sizes, such as Armidale, NSW which had a participation rate of 68% and Alice Springs, with a rate of only 35%.

There were also large geographic differences in participation in the NBCSP with Central and Eastern Sydney PHN having the highest participation rate of 49%, compared with the ACT and Northern Territory PHNs which had the lowest rate of 35%.  Data by PHN or SA3 is not available for the NCSP. 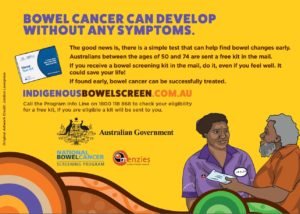 The need to identify and address the reasons for low participation rates is addressed in a number of different articles.  For example, Ee and St John strongly argue that this should be a high priority for the NBCSP, given that the efficacy of the program has been established in the Australian setting.

They state: “On current evidence, increasing participation among the established 50–74-year-old cohort will yield the strongest investment in improved outcomes.” Some suggestions for improving participation rates are provided in the article by Lotfi-Jam et al, including widespread mass media strategies, targeted education sessions with under-screened communities and GP endorsement initiatives.

In their introduction to the series of articles, Sanchia Aranda and David C Currow also emphasise the importance of understanding the causes of low participation rates in some communities in order to address the rising gap in outcomes.

Balancing the benefits of screening programs with any potential harms and determining their cost-effectiveness is an important component of developing future screening policies. An article by Lew et al explores the role of modelling through microsimulation in informing any potential changes to screening programs.  Getaneh et al.also explores microsimulation in relation to future screening in prostate cancer, where there is a need to balance concerns about the negative impact of overtreatment.

The potential benefits of adopting a more risk-based approach to screening is discussed in a paper by Nickson et al.  They explain that screening is, by definition, a population-level intervention, but the one-size-fits-all approach limits tailoring screening to best suit individuals with varying levels of risk.

Emerging knowledge of risk factors, such as the relationship between breast density and breast cancer risk, opens the door for risk-stratified approaches.  This could improve outcomes, particularly for those most at risk for whom current screening protocols are not optimal.

However, Nickson et al also explain that developing these approaches is not straightforward, and risk-based screening could make both the system and the messaging to the public more complicated. This presents challenges which must be overcome if the benefits of risk stratification within screening programs are to be realised.

The change in the NCSP from 2-yearly cytology-based screening to 5-yearly primary HPV screening is discussed by Smith et al who found that the change process was more complex and demanding than initially anticipated.

One specific issue identified as delaying the roll-out of this program was the time taken to build and implement the National Cancer Screening Register. The need to develop regulatory requirements for self-collection was also mentioned as a complication because self-collection was not formally included as an intended use by HPV test manufacturers.

Smith et al also noted that problems with unexpected colposcopy demand caused issues for providers and consumers and may have been due, in part, to some testing outside guideline recommendations, highlighting the importance of training providers in the rationale for guidelines as well as the content.

Overall the authors stressed the need for earlier and more extensively delivered information to healthcare providers and improved coordination of stakeholder support between government and nongovernment organisations in order to extend both the reach and credibility of communication about the program changes.

With a track record of successful and well-established national screening programs for breast, bowel and cervical cancers, researchers are now exploring the feasibility of developing systematic and targeted screening programs for a number of other cancers, including lung cancer, melanoma, Lynch syndrome, and hepatocellular carcinoma.

For example, there is evidence from the US that a targeted screening program of current and former high -risk smokers could prevent deaths from lung cancer. Weber et al suggest that this approach could help reduce Australia’s largest cause of cancer mortality among the population group most at risk.

Melanoma is another well-known cancer where there is insufficient evidence to support population-wide screening. However, Dunlop et al argue that shifting from the current opportunistic approach to melanoma screening to a national, risk- stratified program may be a promising way forward to reduce the heavy burden of the disease

Lynch syndrome is a common but hidden genetic condition that increases the risk of several different types of cancer. Systematic testing for the syndrome in patients with colorectal cancer, as well as genomic developments, could help address under-diagnosis of this condition, according to research conducted by Taylor et al.

Lockart and Danta argue for a better system of routine surveillance for hepatocellular carcinoma in order to reduce the growing incidence and mortality from the disease in Australia, in particular among high-risk populations.

In relation to testing for prostate cancer, Armstrong provides evidence that the new Australian guidelines on prostate specific antigen testing have only had a limited impact on practice and argues that a more thorough evaluation is needed of their impact.

The overall theme of this issue is that for the benefits of screening to be maximised, Australian policy makers and governments must be prepared to engage in ongoing analysis of program effectiveness, and be open to considering program changes to balance benefits, harms and costs.

As in many other areas of population health, high quality data is crucial. In particular, researchers in this area stress the need for investing in linked datasets that enable more complex understandings of the varying impacts of early diagnosis and improvements in treatment on mortality and survival across our community.