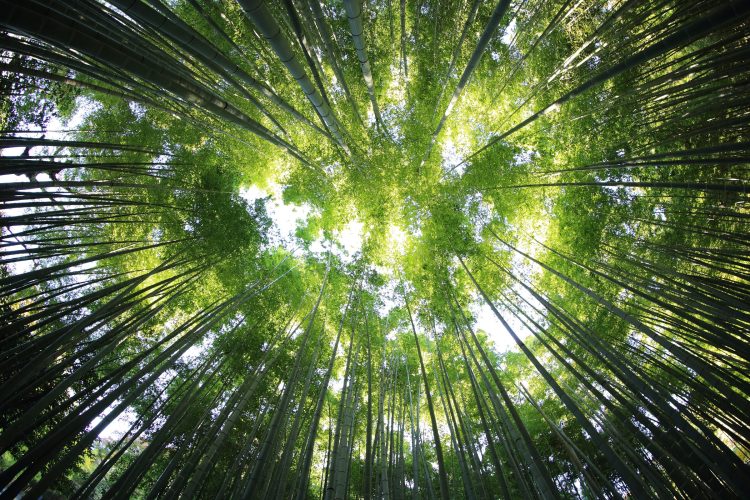 Sharing perspectives that point to our successes, failures and risks. Photo by kazuend on Unsplash

Introduction by Croakey: Nineteen months into the pandemic and seven months since the first vaccines were approved, the World Health Organization’s Director-General says it is “tragic” that the world’s misuse of vaccines has prolonged the suffering of COVID-19.

“The tragedy of this pandemic is that it could have been under control by now, if vaccines had been allocated more equitably,” Dr Tedros Adhanom Ghebreyesus said in a keynote speech to the 138th International Olympic Committee Session on 21 July.

“Instead of being deployed widely to quell the pandemic on all fronts, they have been concentrated in the hands and arms of the lucky few; deployed to protect the world’s most privileged people, including those at lowest risk of severe disease, while the most vulnerable remain unprotected,” he said.

More than three-and-a-half billion vaccine doses have now been administered globally, and more than one in four people have received at least one dose. It was “a horrifying injustice”, he said, that 75 percent of vaccines have been administered in just 10 countries, and in low income countries, only one percent of people had received at least one dose.

Together with the heads of the International Monetary Fund, the World Bank and the World Trade Organization, the WHO leader is pushing for a massive global push to vaccinate at least 10 percent of the population of every country by September, at least 40 percent by the end of the year, and 70 percent by mid-next year.

“If we can reach those targets, we can not only end the pandemic, we can also reboot the global economy,” he said.

Meanwhile, Professor Stephen Duckett, Director of the Grattan Institute’s Health Program, shares two graphs below that underscore the importance of Australia addressing the “train wreck” of its vaccine rollout, while also working to help lift other countries’ vaccination rates.

According to the World Health Organization, as of 16 July, more than 180 million people have been infected with COVID-19, four million of whom died. There were more than half a million new cases on Monday this week.

The blizzard of COVID information (and misinformation) in the old and new media makes it hard to see the wood for the trees.

Two graphs can help us see where we are and point to our successes, failures, and risks. 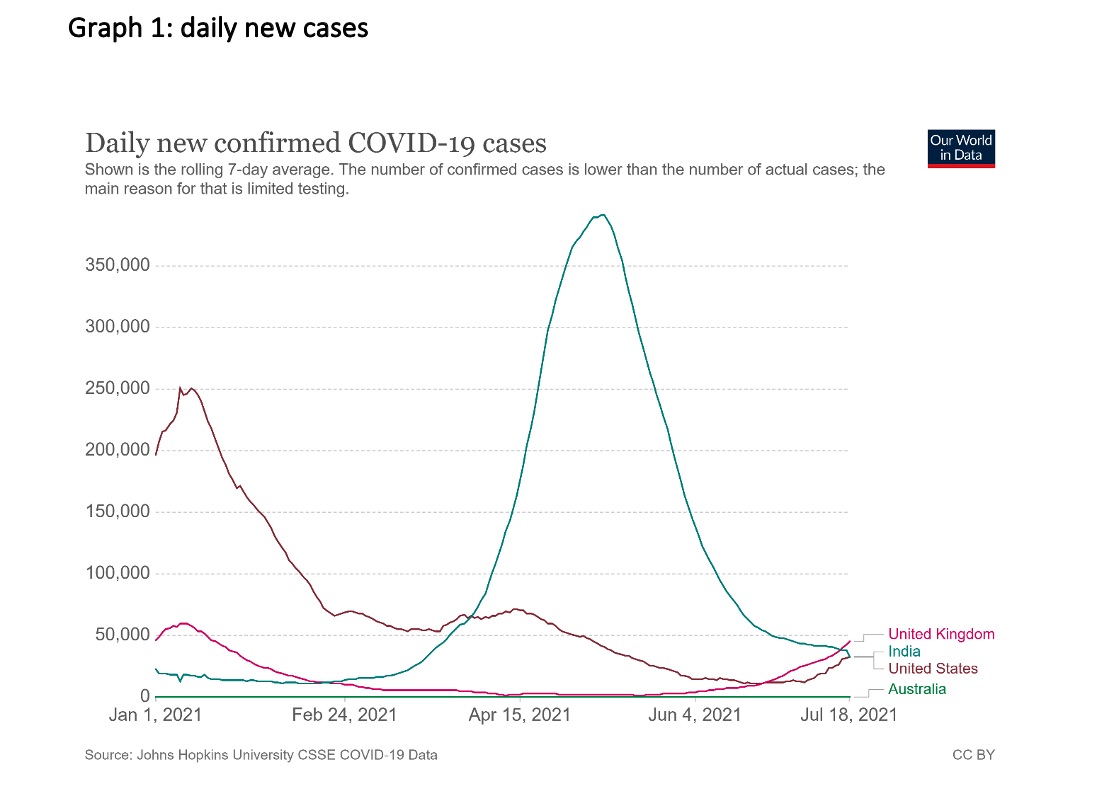 Australia’s response to COVID cases to date has been a stand-out success.

But the daily new cases graph shows that the pandemic is nowhere near over, with cases beginning to rise again in many countries, including in the UK and the US.

The more infectious Delta strain is becoming the dominant strain in many countries, with population vaccination levels too low to prevent spread. 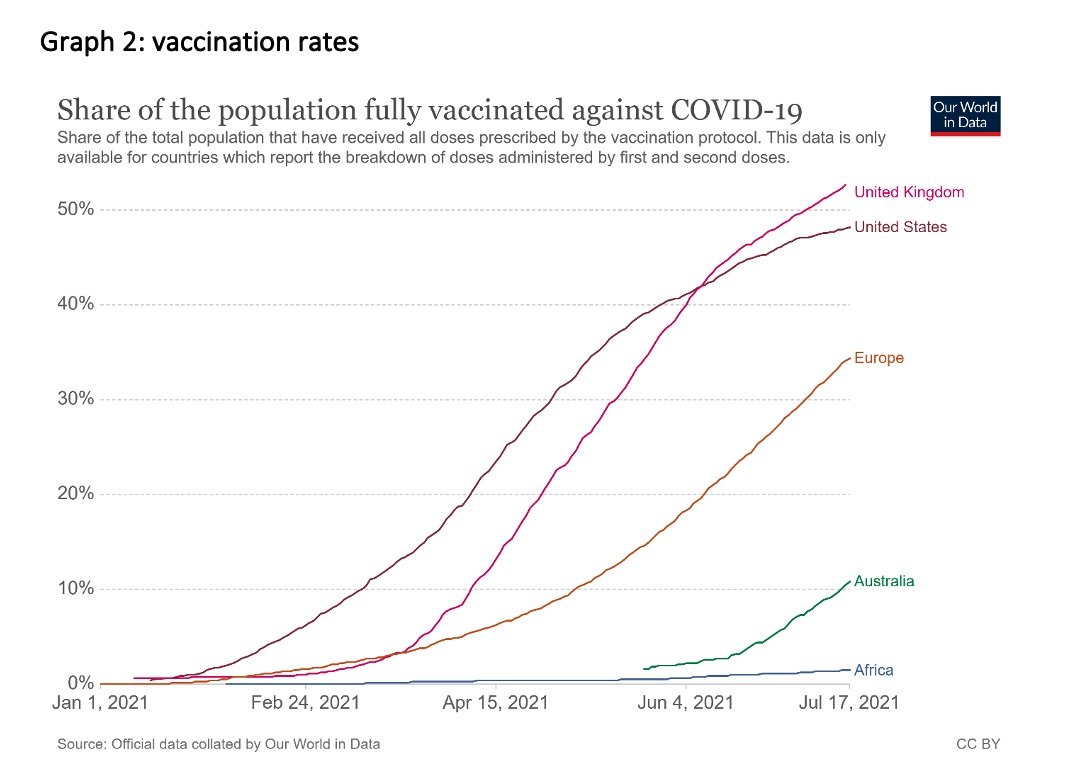 Australia’s performance does not look so good on graph 2: the proportion of the population fully vaccinated.

The thesaurus of descriptors of our vaccine rollout performance includes train wreck, schemozzle, political, and botched.

We were slow to start, and we’ve progressed slowly since then.

Together the two graphs highlight why Australia should not make the mistake the UK has made by rushing to a ‘Freedom Day’ – that is, easing or abandoning restrictions before a sufficient proportion of the population is vaccinated.

Graphs 1 and 2 together show that Australia was good on controlling the spread of coronavirus and bad on vaccinations – and that the UK was the mirror image.

Australia’s complacency, prompted by our success in controlling the spread, turned out to be foolhardy.

Taiwan and New Zealand appear to be suffering from the same mix of low rates and slow rollout.

The UK had high rates of daily new cases at the start of this year, which dropped towards the middle of the year before increasing again.

Despite only about half the UK population being fully vaccinated, Prime Minister Boris Johnson pushed on with a reckless opening up strategy – ‘Freedom Day’, when clubs and pubs reopened and restrictions were lifted, was 17 July.

This dangerous strategy, implemented when daily new cases were in excess of 50,000, is likely to lead to daily new cases increasing above 100,000 in the next month or so.

The lesson for Australia is do not listen to the siren calls of those who do not care about humans and their health, and urge opening up too soon. Opening up while the virus rampages will be bad for both the economy and health.

Australia, indeed, all countries, should open up only when the virus is under control and vaccination rates are high.

Even after opening up, some public health measures will need to remain in place (for example, masks on public transport).

Graph 1 also shows the Indian tragedy. India reached a peak of more than 350,000 daily new cases in the middle of this year. When the virus spreads rapidly, mutations are more likely. The Delta variant was first identified in India in October 2020.

Uncontrolled spread of the virus in any country is a risk to all. The next dominant variant will be more transmissible and potentially more severe, and so it is a global imperative to control the virus everywhere.

Graph 2 shows the very low rates of vaccination in Africa.

Despite the good work of the COVID-19 Vaccines Global Access (COVAX) Facility, vaccine supply is grossly inequitable – less than one percent of people in low-income countries have been vaccinated. This is a potential risk for every country.

Although Australia is in a good place right now – despite difficult lockdowns in NSW, Victoria, and South Australia – we should not be complacent.

We need to get our vaccination rates up and help other countries to do the same.

Stephen Duckett is the Director of the Health Program at Grattan Institute and an Honorary Enterprise Professor in the School of Population and Global Health at The University of Melbourne.

PrevPreviousAs experts come under political fire, why should we care?
NextPrimary health reform: some real-world viewsNext