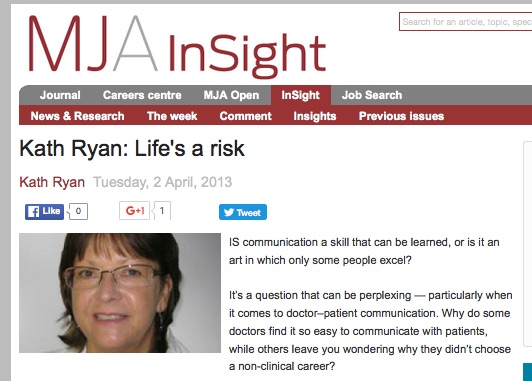 Capping a year of upheaval in medical publishing

As noted previously (see these Croakey articles on departing journalists and yet more departures), many specialist health, medical and science journalists have left the media industry in recent years.

More recently, Amy Corderoy – who did a terrific job as health editor at the Sydney Morning Herald, announced that she had thrown in her notebook for a stethoscope.

Then last week, Kath Ryan – a stalwart of medical editing and publishing for as long as I can remember – finished up at the online publication MJA InSight, after five years there as editor. Her redundancy took effect just over a week before Christmas.

Ryan says she was told that her redundancy – which follows a tumultuous year at AMPCo (see previous Croakey posts about the sacking of former Editor in Chief Professor Stephen Leeder and related resignations) – was due to changes that would take effect at the MJA and MJA InSight next year.

These would include moving InSight from the MJA website to the AMA’s Doctor Portal, which launched last December.

Ryan, who has worked in medical publishing for nearly 30 years and is a former editor of Australian Doctor, said the redundancy had been unexpected and traumatic. She will be looking for another job in the New Year. “I’m pretty disappointed they think they don’t need my expertise any more,” she said.

Catherine Godfrey, the publishing manager at AMPCo, declined to comment on Ryan’s redundancy when contacted by Croakey.

The MJA’s new Editor in Chief, Professor Nicholas Talley, has promised to boost the scientific reputation of the MJA over the next few years, and no doubt the journal’s progress will be closely monitored by the Friends of the MJA, a group of doctors “deeply concerned” about its welfare.

Below are some reflections from former MJA editors Dr Ruth Armstrong and Professor Stephen Leeder, and contributor Dr Ken Harvey.

Dr Ruth Armstrong: MJA InSight: a baton change or the end of an era?

My old workplace, the MJA, is latterly no stranger to staff redundancy. During 2015, the Journal has shed most of its assistant (manuscript) editors, the production staff, and a number of roles from the wider company, the Australasian Medical Publishing Company (AMPCo).

In addition to the redundancies, the MJA’s Editor in Chief, Professor Stephen Leeder, was removed from his position after he objected AMPCo board’s plan to outsource production of the Journal to Elsevier, and the Senior Deputy Editor, Tania Janusic, resigned in protest.

I resigned my role as MJA InSight’s Medical Editor for the same reason, breaking a 17-year attachment to the MJA.

A few weeks ago, I learned that my former colleague and mentor, MJA InSight’s Editor, Kath Ryan, was also to be made redundant in a move to rationalise AMPCo’s journalistic functions. Kath is a consummate medical news journalist, and a sensitive, intuitive editor with high ethical standards and an innate ability to get the best out of others. Her loss from MJA InSight, however the publication develops from here, is another blow to the collective skills and experience of the MJA workforce.

Kath has worked as a medical journalist and editor for almost three decades. The two journalists who now form AMPCo’s team (covering the MJA and the wider company) have many skills and diverse backgrounds, but only about five years of experience in the medical field between them

It is curious that the management of AMPCo selected the most experienced and longest serving of the three journalists for redundancy. This situation mirrors that of the rest of the MJA editorial team, where, through redundancy, resignations and other modes of departure, most remaining editorial staff, while well qualified and highly motivated, have limited experience.

AMPCo’s exact plans for MJA InSight are unclear but they have stated that, some time next year, it will be moved from its current home on the MJA website to be housed on the AMA’s “doctorportal” http://www.doctorportal.com.au/about-us/. This change might seem cosmetic (and indeed practical) but, in my opinion, it could pose some risks.

As it currently stands, MJA InSight is an open access, non-peer reviewed, interactive news and opinion component of the MJA website. It is overseen by the MJA Editor in Chief and enjoys the MJA’s editorial independence, including all decisions about content, reuse and advertising. The AMA’s doctorportal features MJA and MJA InSight content, but readers need to click through to the MJA to access the full articles.

Being part of the MJA has given the InSight editorial team some tremendous advantages: access to authors and reviewers, early knowledge of MJA content and background, oversight by the MJA editors and, of course, visibility to the MJA’s readers, many of whom are not doctors or have no connection with the AMA

InSight’s “open” and “click” rates are currently above industry average, and the high number of comments on the site itself and on social media reveal that is has a diverse readership. If AMPCo’s plan to house it on doctorportal includes a reduction in MJA oversight, it could fundamentally change both the content and the readership, undermining its success.

These are challenging times for publishing: the events at the MJA mirror those that have occurred in other media organisations over the past few years. The planned changes to MJA InSight will take effect as the Journal’s new Editor in Chief, Professor Nick Talley, settles into his role. Hopefully this will include overseeing MJA InSight, so that is can continue to flourish as an accessible, flexible and influential arm of the MJA.

In an “Open letter to the medical community” posted without editorial permission or comment on the MJA website earlier this year, the Chair of the AMPCo board, Richard Allely, said the board was fully committed to continuing the MJA’s role as “the leading provider of Australian clinical research, evidence-based reviews and debate on the important issues affecting Australian health care” and that the changes in production were necessary to maintain Journal’s quality and future sustainability.

The stakes are high and it has been a painful period in the Journal’s history. I hope they know what they’re doing.

Declaration: Ruth Armstrong is an occasional moderator at Croakey.

I had the pleasure of working with Kath Ryan for two years when I was editor-in-chief at the MJA 2013-2015.  She is a highly capable, interesting, warm and caring person with strong professional values, exceptional competence as a medical editor, a good writer with journalistic skill and sensitivity as well and fierce commitment. She had an impressive career before coming to MJA.

MJAInSight was a less formal avenue than MJA for communication with a loyal group of on-line readers.  It drew on material from the MJA but ranged more broadly.

I grew to have complete confidence in Kath’s judgment about content and the articles she commissioned including those from a panel of high-quality medical journalists.

Folding InSight into the AMA DoctorPortal is a decision made by the board of AMPCo, the publishing company. My views about the board and its partnership with the international publisher Elsevier (now rebadged as Relix) are well known.

The concept of DoctorPortal was developed by Elsevier in the UK in 2007  and then closed after two years.  One wonders….

I am both sad and disappointed that Kath has been made redundant by AMPCo. I have worked with her closely on number of articles I submitted &/or she commissioned for MJA Insight; she has been an excellent editor who was always able to improve and simplify my contributions.

A great editor is a joy to work with and Kath will be missed.

The feature image on this post is taken from this InSight article by Kath Ryan.

PrevPreviousAll I want for Christmas is…
NextTo tackle hepatitis C, we need to close the justice gapNext