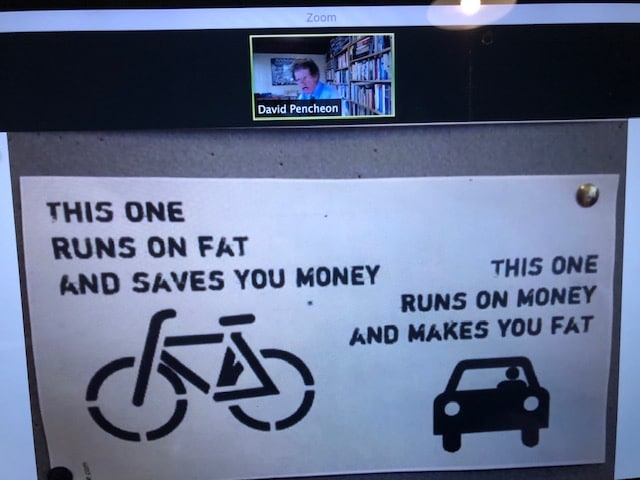 This article is published as part of Croakey’s contribution to the global Covering Climate Now collaboration, and was funded by our Patreon crowdfunding campaign to support public interest journalism on climate and health.

Health care is carbon-intensive and contributes to climate change; in Australia, it is the cause of seven percent of national carbon dioxide equivalent (CO2e) emissions.

The health sectors of 36 major countries are responsible for 4.4% of annual global CO2e emissions, and hospitals are the main sources of these emissions.

On 4 May 2020, The Medical Journal of Australia published a special issue concerned with sustainable healthcare.

Below are summaries of six papers from the issue, while this Twitter thread reports on the issue’s virtual launch on 5 May, where the speakers included Dr David Pencheon, the Founding Director of the Sustainable Development Unit in NHS England and Public Health England.

The carbon footprint of pathology testing

A considerable proportion of pathology services ordered are thought to be unnecessary – between 12% and 44% according to one meta-analysis.

The authors took a step towards quantifying the environmental impact of such waste by estimating the carbon footprint (as expressed by CO2e) associated with five commonly ordered pathology tests in two Australian hospitals:

The results are in the table below. 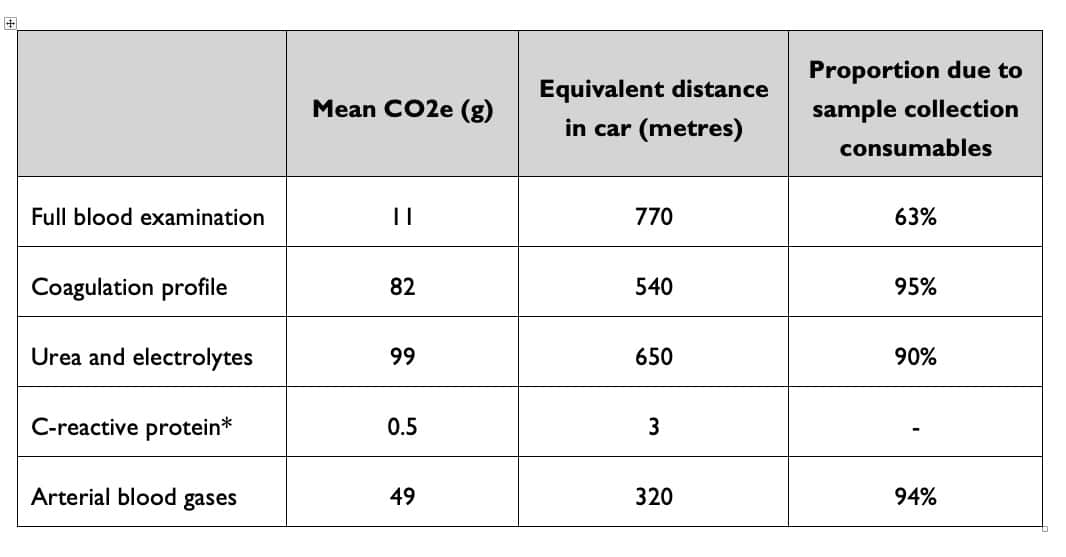 To put it simply, ordering one full blood examination is equivalent to driving 770 metres in an average car.

For most tests, the main sources of CO2e emissions were sample collection consumables (swabs, gloves, vacutainer holders and collection tubes, specimen bags). As CRP was generally ordered together with U&E, it had no separate emissions impact during the collection phase.

More than half the CO2e emissions associated with the British National Health Service are caused indirectly by the use of consumable items, including pharmaceuticals and medical devices.

The authors say: “While the greenhouse gas impact of individual tests is relatively small, 17.8 million haematology and 56.2 million biochemistry tests were funded by Medicare during 2018–19.”

In the hierarchy of waste reduction – avoid, reduce, re-use and recycle – there appears to be great opportunities to reduce. “The main opportunities for reducing waste and CO2 emissions involve changing the behaviour of clinicians to avoid and reduce unnecessary pathology testing,” they say.

While bushfires are part of national life, the risks they bring have increased with climate change.

The 2019–20 bushfires in southern and eastern Australia directly caused at least 33 deaths, extensive property damage and terrible loss of flora and fauna. A major public health concern is population exposure to atmospheric particulate matter (PM) with a diameter < 2.5 μm.

But more nuanced and detailed advice, which considers long-term effects, could consider:

The authors strongly recommend that all Australian jurisdictions present actual hourly PM2.5 data, rather than an index. Real time, hourly averaged PM2.5 concentrations are the most appropriate metric to guide personal behaviour that minimises exposure to bushfire smoke, they say.

Consistency of air quality information and related public health advice across jurisdictions is essential. It is time for an independent national expert committee on air pollution and health protection to be established to support environmental health decision-making in Australia.

This new expert committee should have a clear mandate and resources to develop evidence‐based, accurate, practical and consistent advice on health protection against bushfire smoke, and air pollution more broadly, across jurisdictions.

Some hospitals are improving the quality of food sold in hospitals, in line with guidelines developed by state governments and healthcare providers.

A sustainable future in health: ensuring as health professionals our own house is in order and leading by example

Professor Nick Talley, MJA editor, called on his colleagues to step up. “The time for complacent acceptance of the status quo must end; it is time for health professionals to step up and lead on a sustainable environment and health. At the MJA we hope every health professional will work to do so with us,” he says.

The MJA pledges to do its part. AMPCo, which publishes the MJA, has no direct investment in fossil fuels. And the MJA plans a staged reduction in print, alongside a plan to reduce waste, while acknowledging that its print version is still wrapped in plastic.

Talley says health professionals should “lead by example in our homes and practices and with how we travel”.

He says: ‘we can educate our patients and those we work with and train.’ And ‘we can influence the health system we are a key part of too, for example, by working on strategies to drive down carbon emissions, waste and pollution from our hospitals’.

Acting on climate change and health in Victoria

The authors describe efforts made by the Victorian Government to address climate change, in the context of recent health events directly related to climate change such as:

Victoria has set a foundation for fundamental change in legislation. The supporting policy and strategy elements, focused on population health and wellbeing, are additional enablers for such change. We have an opportunity to build a more resilient sector while limiting our contribution to the climate crisis. We must take it.

Climate change represents an existential threat to human health. The health sector, as a key support to human health and wellbeing, as well as a significant contributor to Australia’s emissions, has a key role to play in addressing this threat.”

The authors describe moves in Western Australia towards embedding sustainability in government and the law.

In 2008, the first climate change adaptation report in Australia specific to the health sector was produced in WA.

The precautionary principle states that ‘if there is a public health risk, lack of scientific certainty should not be used as a reason for postponing measures to prevent, control or abate that risk’.

The principle of proportionality requires that decisions made, or actions taken, should be proportionate to the public health risk, taking into account individual, business and community impact.

The principle of intergenerational equity states that ‘the present generation should ensure that public health is maintained or enhanced for the benefit of future generations.’

The Sustainable Health Review ran from 2017 to 2019, and made recommendations that, among other things, the health system should reduce its environmental footprint, with three components:

“The Climate Health WA Inquiry is, to our knowledge, the first statutory inquiry anywhere in the world focused on the health impacts of climate change. Our task is to create a practical path forward for the health sector in WA, consistent with the size and timeframe of the challenge provided,” the authors say.

The inquiry findings will form the basis of a new, coordinated health and climate change framework for WA.

Its recommendations will also be aligned with the proposed State Climate Policy — a roadmap for planning and investment across all sectors of the economy.

If the report can successfully localise the impacts, engage the public and prioritise actions needed in one Australian state, it will have broader national and global significance as a model for regional inquiries and reports.”

• Dr Mark Ragg is an editor at Croakey, and a writer, publisher and Adjunct Fellow Indigenous Health, Faculty of Health, UTS

This article is published as part of the Covering Climate Now initiative, an unprecedented global media collaboration launched last year to put the spotlight on the climate crisis in the leadup to a Climate Action Summit at the United Nations General Assembly in New York on 23 September. It is co-founded by The Nation and the Columbia Journalism Review (CJR), in partnership with The Guardian. See Croakey’s archive of climate and health coverage.

If you value Croakey’s coverage of climate and health, please consider supporting our Patreon fundraising campaign, so we can provide regular, in-depth coverage of the health impacts of the climate crisis, taking a local, national and global approach.

PrevPreviousAmid and beyond COVID-19, it’s time to focus on healthcare not warfare
NextSupporting the mental wellbeing of healthcare workers during COVID-19Next