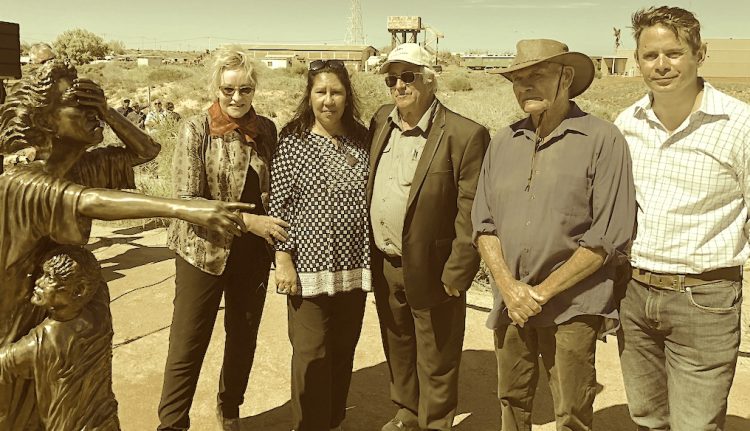 Carnarvon, a remote town stepping up for historical truth-telling

In a joint statement, they said the bronze sculpture was part of a wider project working towards acknowledgement and healing from the traumatic history of the lock hospitals that operated on Bernier and Dorre Islands, west of Carnarvon, between 1908 and 1919.

The sculpture of a young girl and boy clinging together, by artists Joan and Charlie Smith, portrays the grief and trauma of those left behind when loved ones were taken to the remote islands. A cultural ceremony was held before the unveiling to provide protection for the area where the two sculpted figures stand.

As reported at Croakey previously, a healing ceremony was held near the One Mile Jetty in January this year (watch a film of it here), to release the spirits of the prisoner-patients who died on the islands. See this publication of photographs from the event.

On the same day as the memorial sculpture’s unveiling, on 17 April, the WA Ministers announced that the Gwoonwardu Mia Gascoyne Aboriginal Heritage and Cultural Centre would reopen in Carnarvon, following its closure in 2015. Minister MacTiernan promised it would reopen by NAIDOC Week.

Also on 17 April, Minister MacTiernan officially opened the Carnarvon Heritage Precinct One Mile Jetty Interpretive Centre, which also includes historical truth-telling around the lock hospitals history, which until recently had received little public acknowledgement in the town despite it being a central location for this history that affected Aboriginal communities and families right across WA.

Below are some tweets and clips from these recent events, held on Yinggarda Country.

The WA Ministers acknowledged in their statement the role of community members Kathleen Musulin and Bob Dorey in driving projects of acknowledgement and healing around the lock hospital histories. Read more in this ABC story by Karen Michelmore. 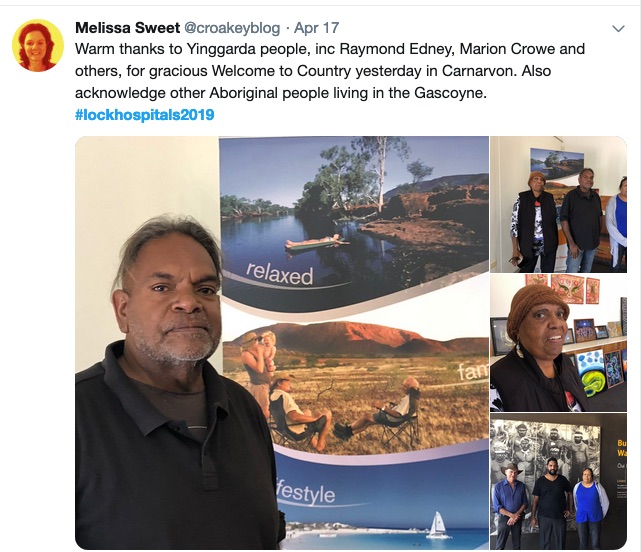 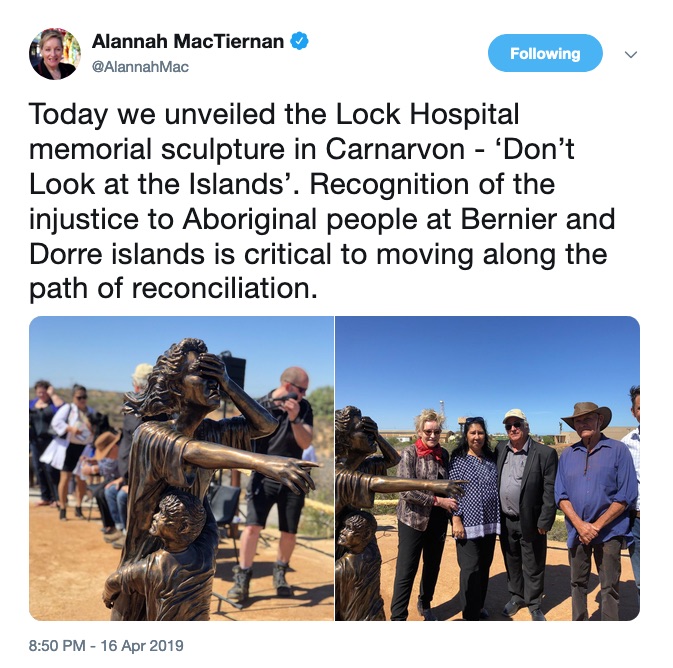 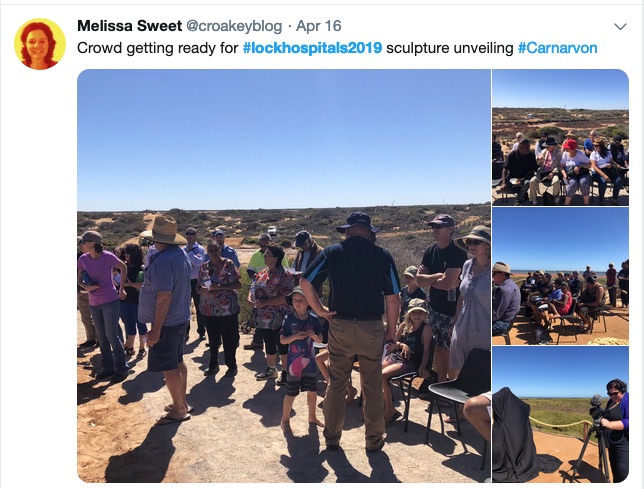 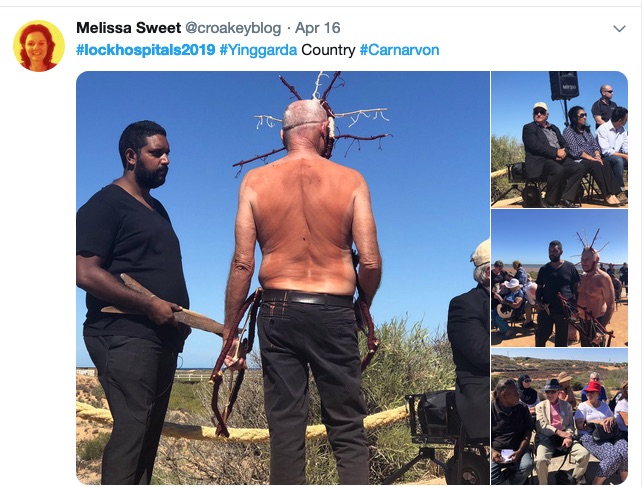 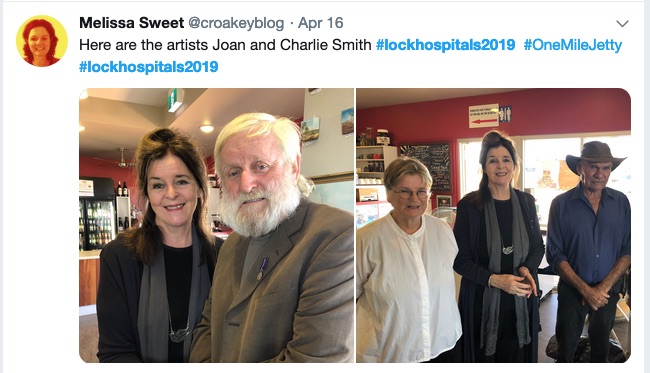 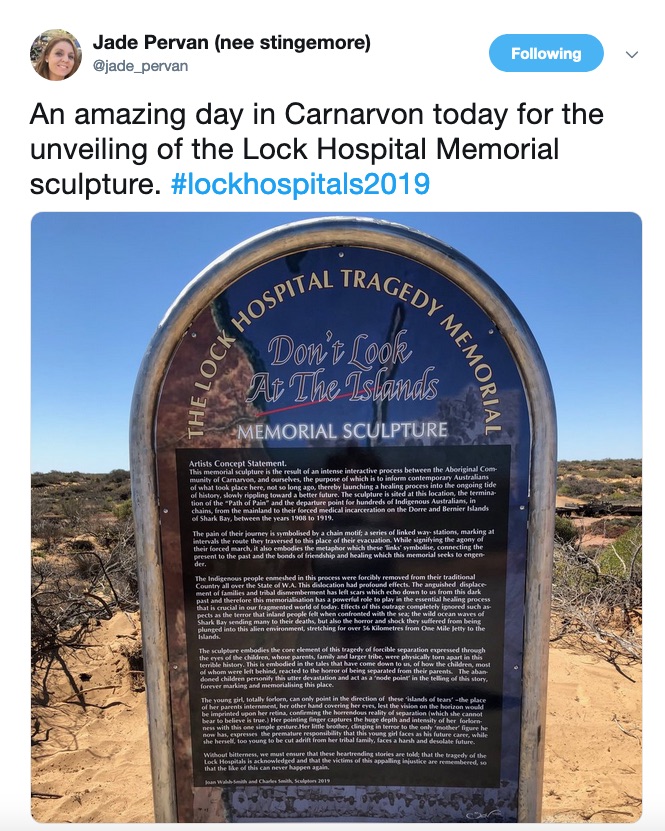 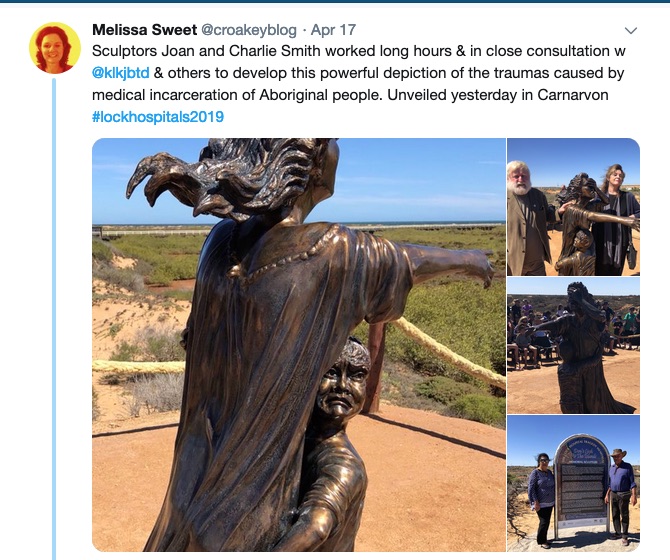 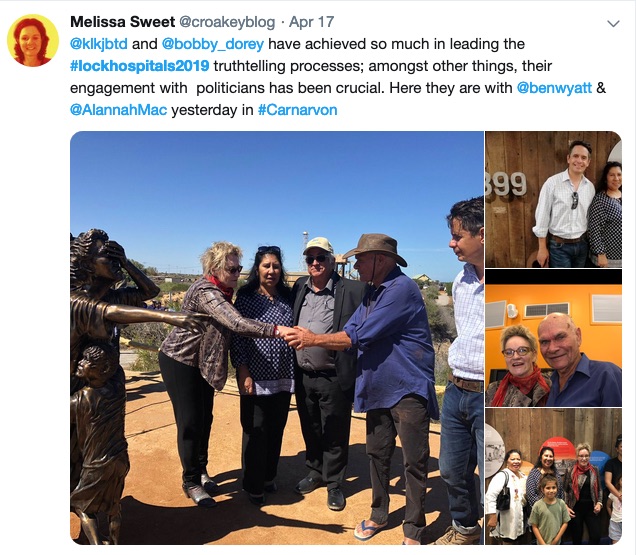 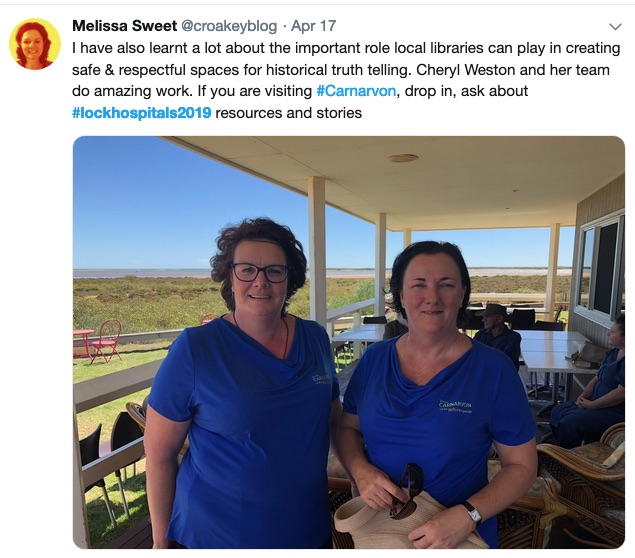 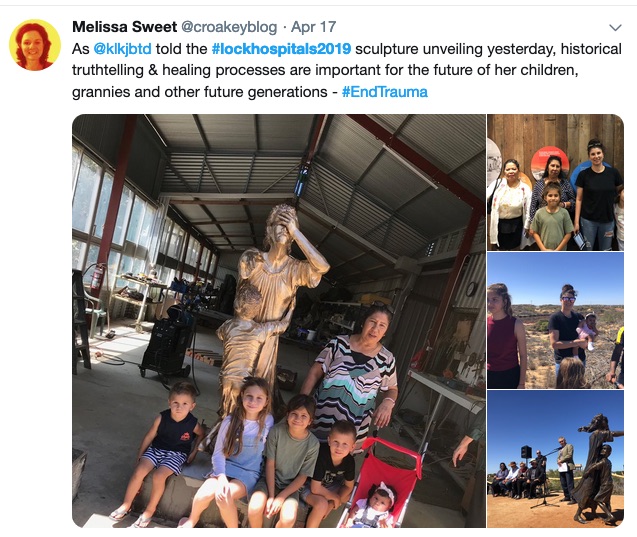 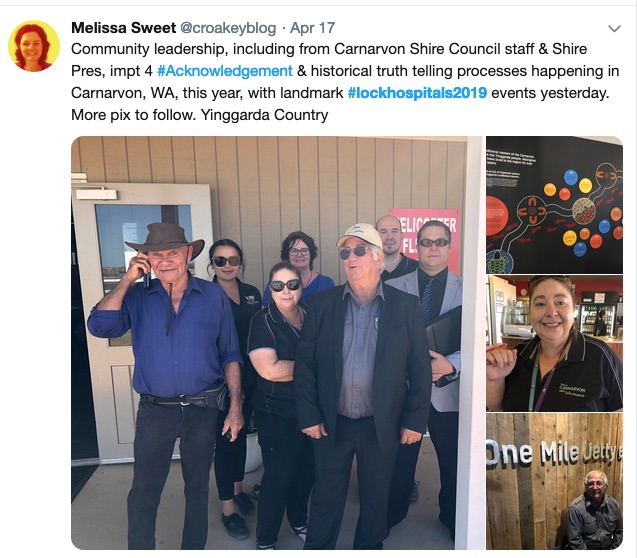 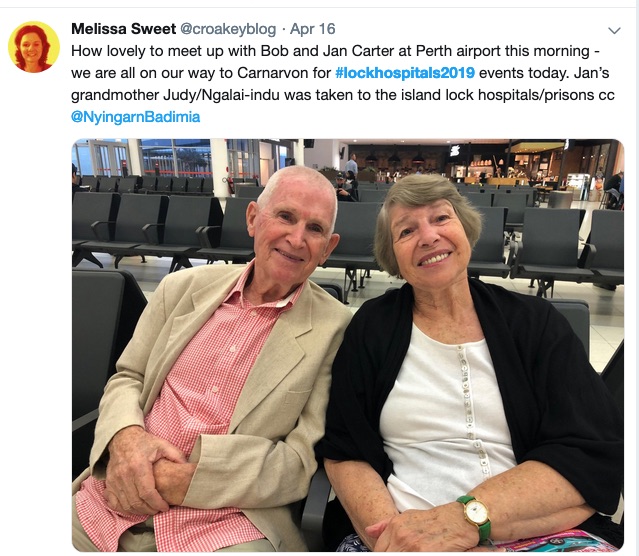 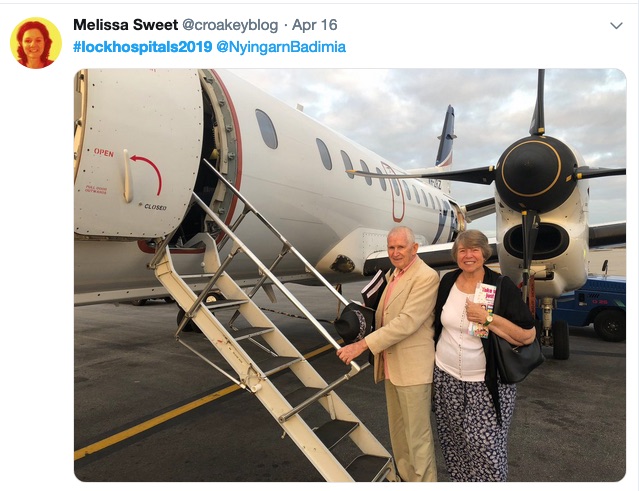 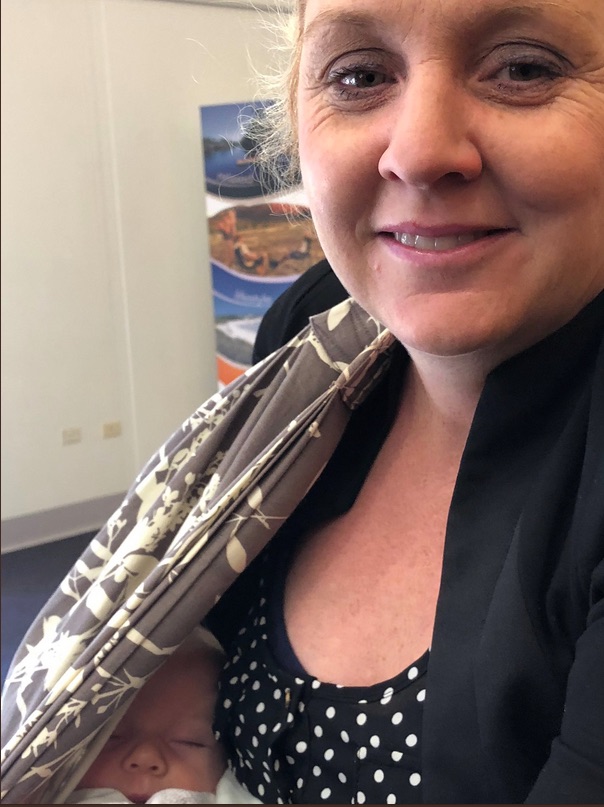 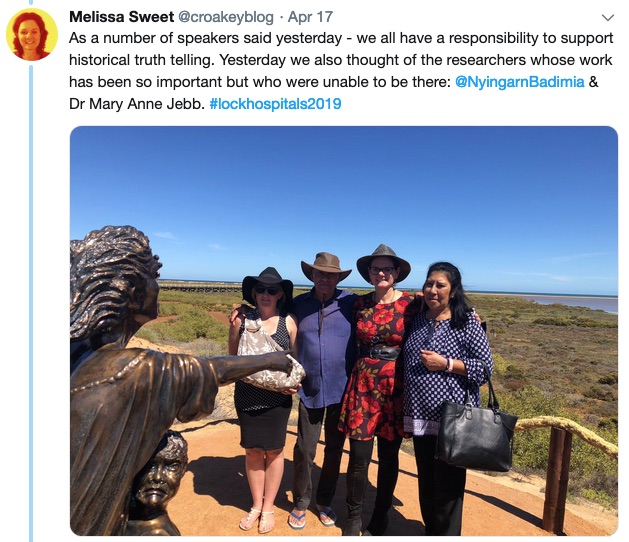 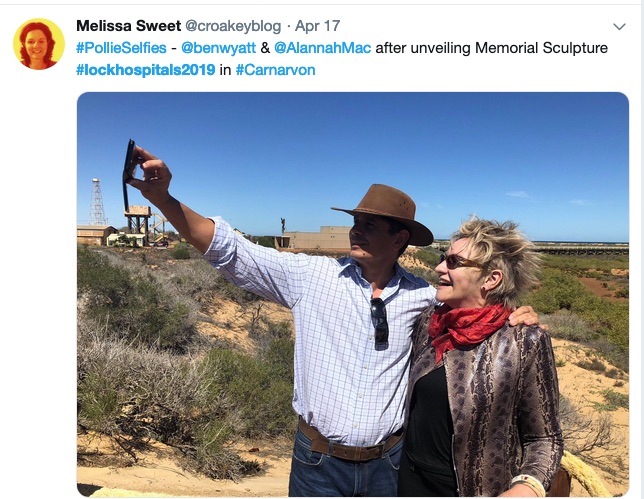 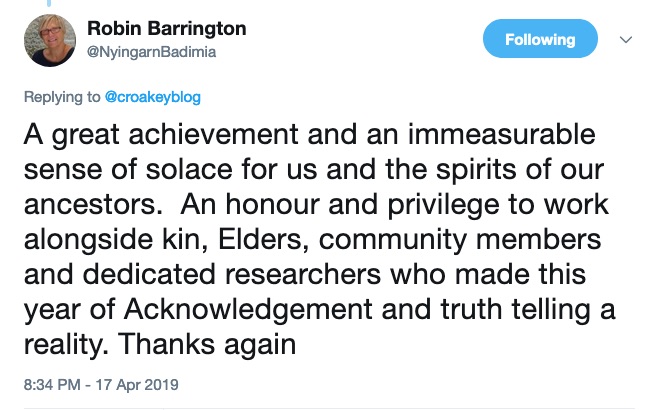 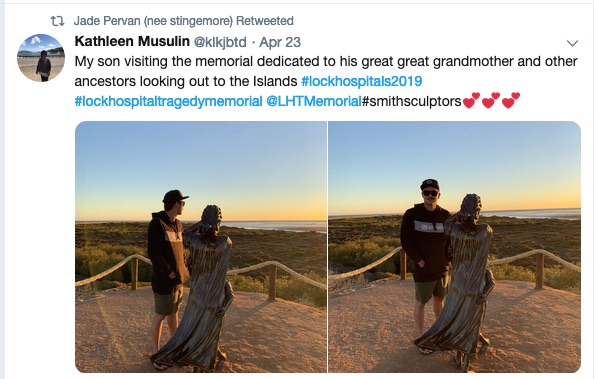 On the day of the sculpture unveiling, people in Carnarvon were waiting for the Gascoyne River to arrive in town – a very special event. 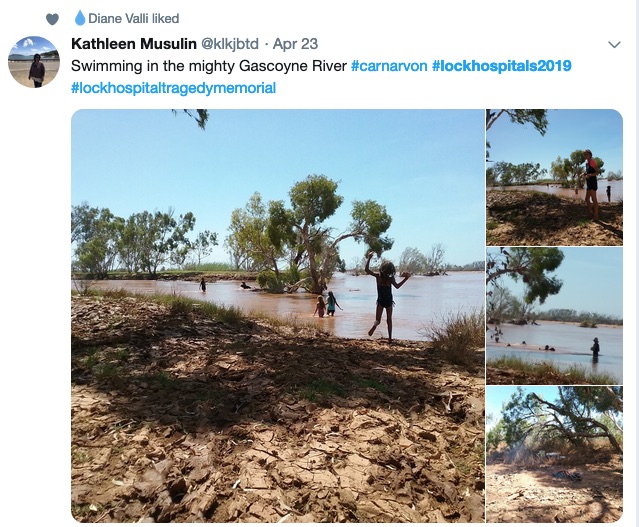 Watch the Welcome to Country and cultural ceremony before the sculpture unveiling; watch Minister MacTiernan address the ceremony and the unveiling; watch Minister Wyatt address the ceremony; watch Shire President Karl Brandenburg, Kathleen Musulin and Bob Dorey speak, and also hear June Carter’s family story. (These videos had a total of 649 views via Periscope as of 2 May, 2019).

Watch an interview with Minister Wyatt

He discusses the national significance of this emotional day in Carnarvon. 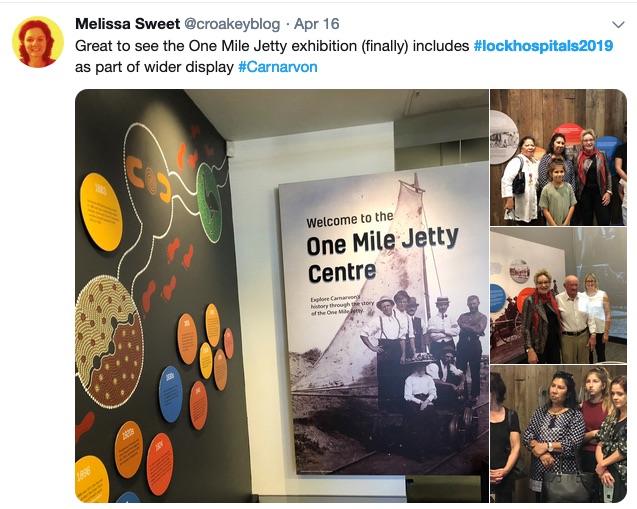 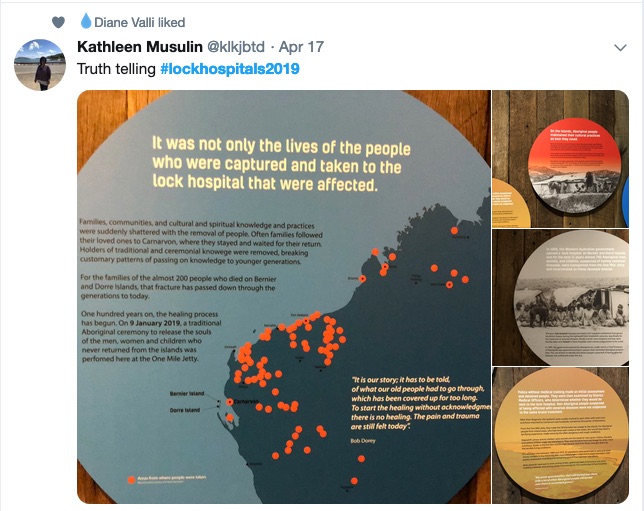 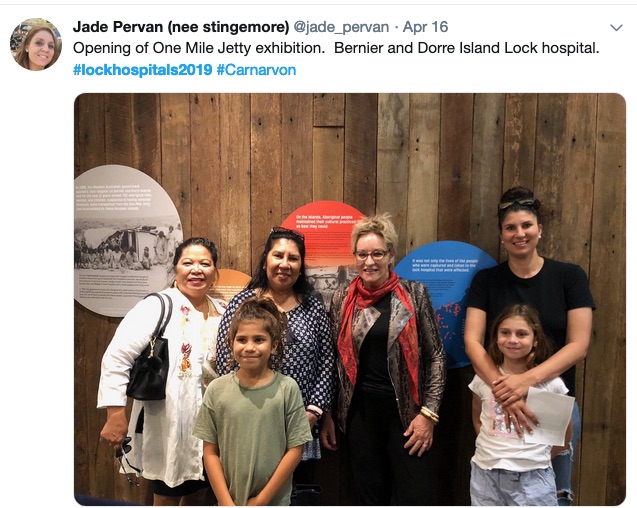 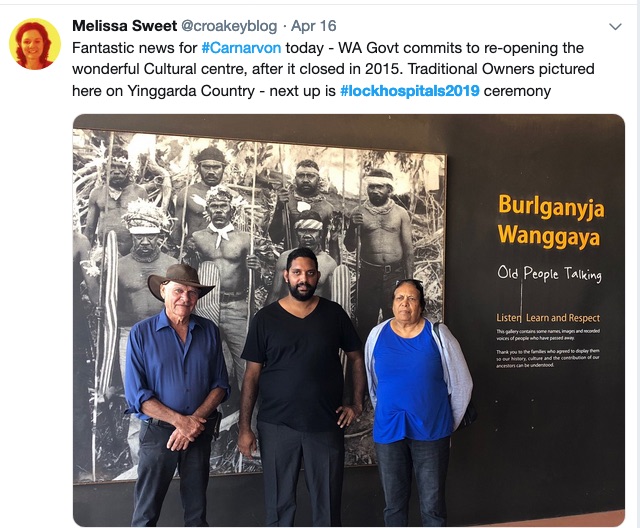 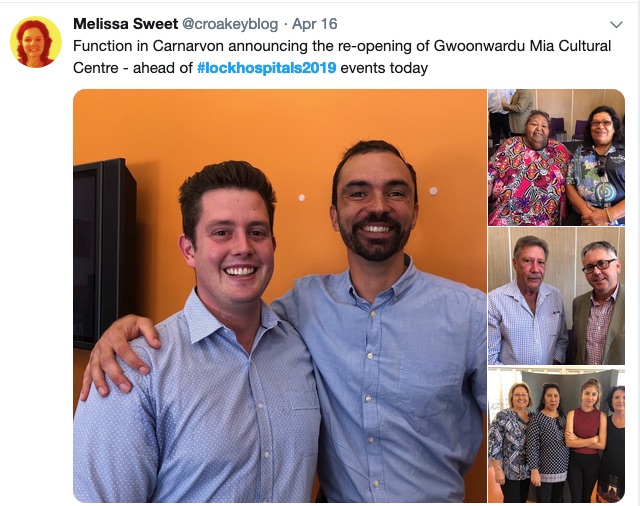 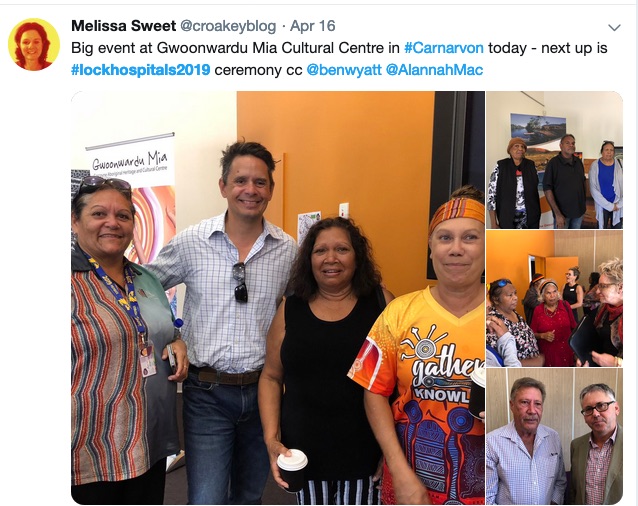 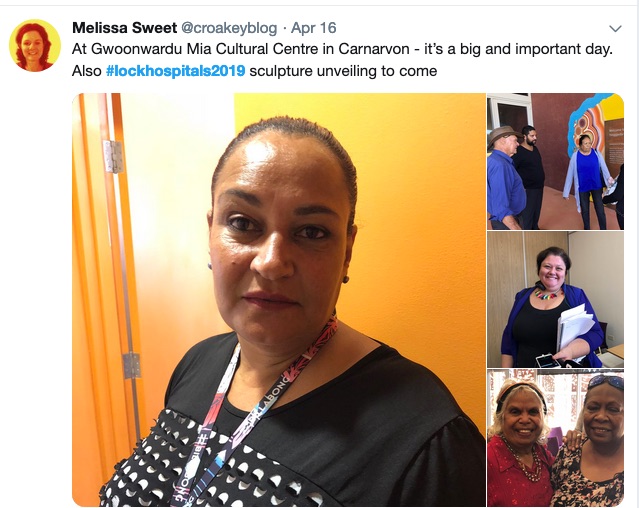 In Perth this week

Meanwhile, in Perth this week, the lock hospital history was also profiled during the WA State History and Heritage Conference, and in a seminar today at the University of Western Australia – see this Twitter thread from the presentation (via a Periscope broadcast). 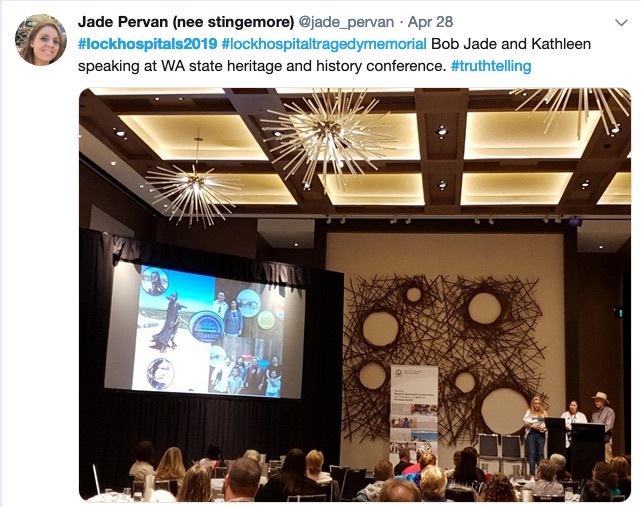 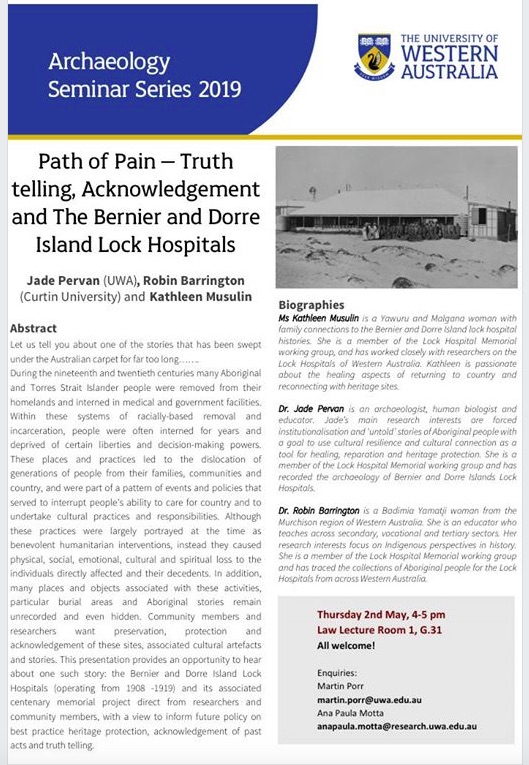 Warm thanks to everyone contributing to #LockHospitals2019 discussions. Between 14 April and 2 May, 89 Twitter accounts sent a total of 334 tweets, creating more than two million Twitter impressions, according to Symplur Analytics. Read the Twitter transcript here.

• Read more articles in Croakey’s ongoing Acknowledgement series, which is profiling the importance of historical truth-telling about the brutalities of colonisation as an important public health issue.

Declaration: Melissa Sweet is a member of the Lock Hospitals Memorial Working Group in Carnarvon, which brings together community members, the Shire of Carnarvon and researchers.

PrevPrevious#AusVotesHealth Week 3: “What does it really cost? What about the cost of inaction?
Next#AusVotesHealth: a “stark choice” is on offer on May 18Next