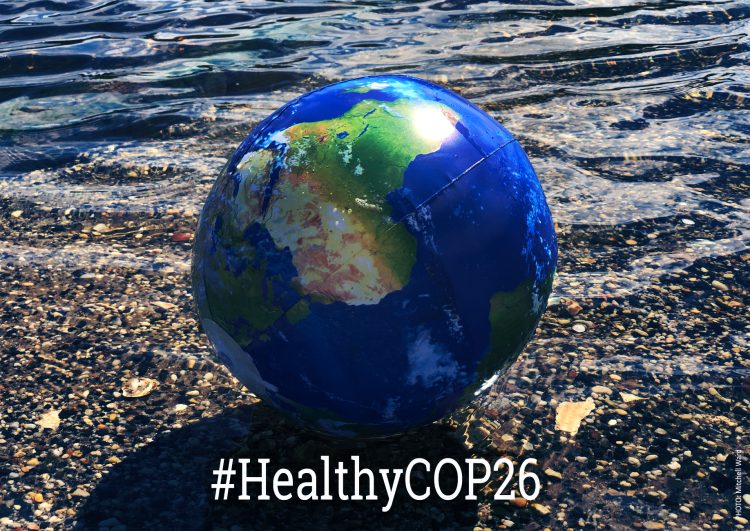 Catch up with the highs and lows from COP26: from the fossil fools to warrior cries

For those concerned with climate and health, what have been some of the highlights and lowlights from COP26 so far?

Remy Shergill, from the Climate and Health Alliance, reports. (And see this handy guide on what’s coming up in the days ahead.)

We’re just under halfway at COP26.

Whether you’re an avid climate action enthusiast who has been watching online meetings and Twitter into the early hours, or whether you haven’t followed the conference at all, here’s an update as to how it’s going.

After years of lobbying by successive international health delegations, health has been chosen as a priority area for COP26 for the first time.

The COP26 Health Programme has highlighted climate-health solutions via sustainable healthcare, health advocacy, and issued strong calls for countries to include health in their official commitments and further funding for adaptation research.

Dozens of events have already occurred highlighting the health impacts of climate change at the conference (you can find more details here).

The value of health professionals being in the room was made evident in an Open Dialogue Session on 4 November, chaired by UK COP26 President Alok Sharma and UNFCCC Executive Summary Patricia Espinosa.

Health was not being mentioned in the discussion, so Dr Rita Issa, a British medical doctor, intervened to highlight the health effects of climate, to applause.

In Australia, Climate and Health Alliance Director Fiona Armstrong was interviewed on health being left out of Australia’s climate plans.

Coal is the most polluting fossil fuel in regards to air quality and greenhouse gases.

More than 40 countries have committed to phase out their use of coal-fired power, including major coal users like Canada, Poland, Vietnam and South Korea. Bigger economies have committed to ending coal use in the 2030s, and smaller economies doing so in the 2040s. South Africa, the Philippines and Indonesia did not sign the pledge, but agreed to retire many of their coal plants early.

At least 25 countries and public finance institutions commit to ending international public support for the unabated fossil fuel energy sector (for example, projects that do not deploy technology to absorb the carbon pollution they produce) by the end of 2022.

The reaction has been mixed. The UK business secretary Kwasi Kwarteng said: “Today’s ambitious commitments made by our international partners demonstrate that the end of coal is in sight.”

However, others commented that the phase-out deadlines were not soon enough to stop warming at 1.5 degrees. It’s also missing signatories from many coal-dependent countries, including China, India and the USA.

Has Australia signed on? No. Countries certainly must do more to accelerate the phase-out of coal, but Australia is way behind even this low bar.

When releasing Australia’s newest climate plan, Energy Minister Angus Taylor said the plan “will not shut down coal or gas production.” Resources Minister Keith Pitt has said coal will remain a significant contributor to the Australian economy “well beyond 2030”.

Brazil, Russia and Indonesia join 128 other countries in pledging to end and reverse deforestation by 2030. Signatory countries contain over 90 percent of the world’s forests.

The pledge is backed by a global roadmap to make 75 percent of forest commodity supply chains sustainable, and the biggest ever commitment of public funds for forest conservation. Countries pledged to collectively provide US$12 billion for forest-related climate finance between 2021-2025, including an initial pledge of $1.7 billion to support the advancement of Indigenous Peoples’ and local communities’ forest tenure rights and greater recognition and rewards for their role as guardians of forests and nature.

Has Australia signed on? Yes.

The launch of the Global Methane Pledge saw over 100 countries committing collectively to reduce global methane emissions by 30% by 2030. The pledge was first proposed in September with nine signatories, and had 60 signatories just last week.

Has Australia signed on? No. The Government has stated that the impact of the pledge would be too great on the Australian agricultural sector.

Barnaby Joyce said of the pledge, “the only way you can get your 30 percent by 2030 reduction in methane on 2020 levels would be to grab a rifle and go out and start shooting your cattle”.

Yesterday, the International Energy Agency released an updated analysis suggesting that the new pledges at COP26 means that current global commitments would hold global temperature rise to 1.8 degrees by 2100, if they are met in full and on time. Particularly influential is the net zero by 2070 target from India, and the methane pledge.

“This is a landmark moment: it is the first time that governments have come forward with targets of sufficient ambition to hold global warming to below 2°C.”

What still needs to happen

COP26 should produce a plan for how countries must increase ambition and accelerate their emissions reductions in future years. Denmark and Grenada have been put in charge of drawing up options for this, and Britain is considering a proposal that would require countries to come back with new, more ambitious pledges as early as 2023.

At the 2009 COP15 in Copenhagen, wealthy countries promised to provide $100 billion annually by 2020 to help poorer countries adapt to and mitigate climate change.

While finance for low-carbon and resilient development is increasing, it remains “far short of the levels needed” according to the UK COP26 Presidency. Developed countries outlined how the goal will be delivered by 2023 at the latest.

The rulebook for the Paris Agreement

Negotiators need to sign off on the rulebook to implement the 2015 Paris Agreement, including how carbon markets work, how countries will set future targets, and finance.

But what has Australia actually done on climate?

In positive news, Australia did sign the deforestation agreement outlined above.

Prime Minister Morrison also announced our pledge to reach net zero emissions by 2050, though this is far less ambitious than the majority of other developed countries at the conference.

Australia’s pro-gas stance is well and truly on display. Below is Angus Taylor, Energy Minister, defending the use of gas as long as Australia reaches net zero by 2050. 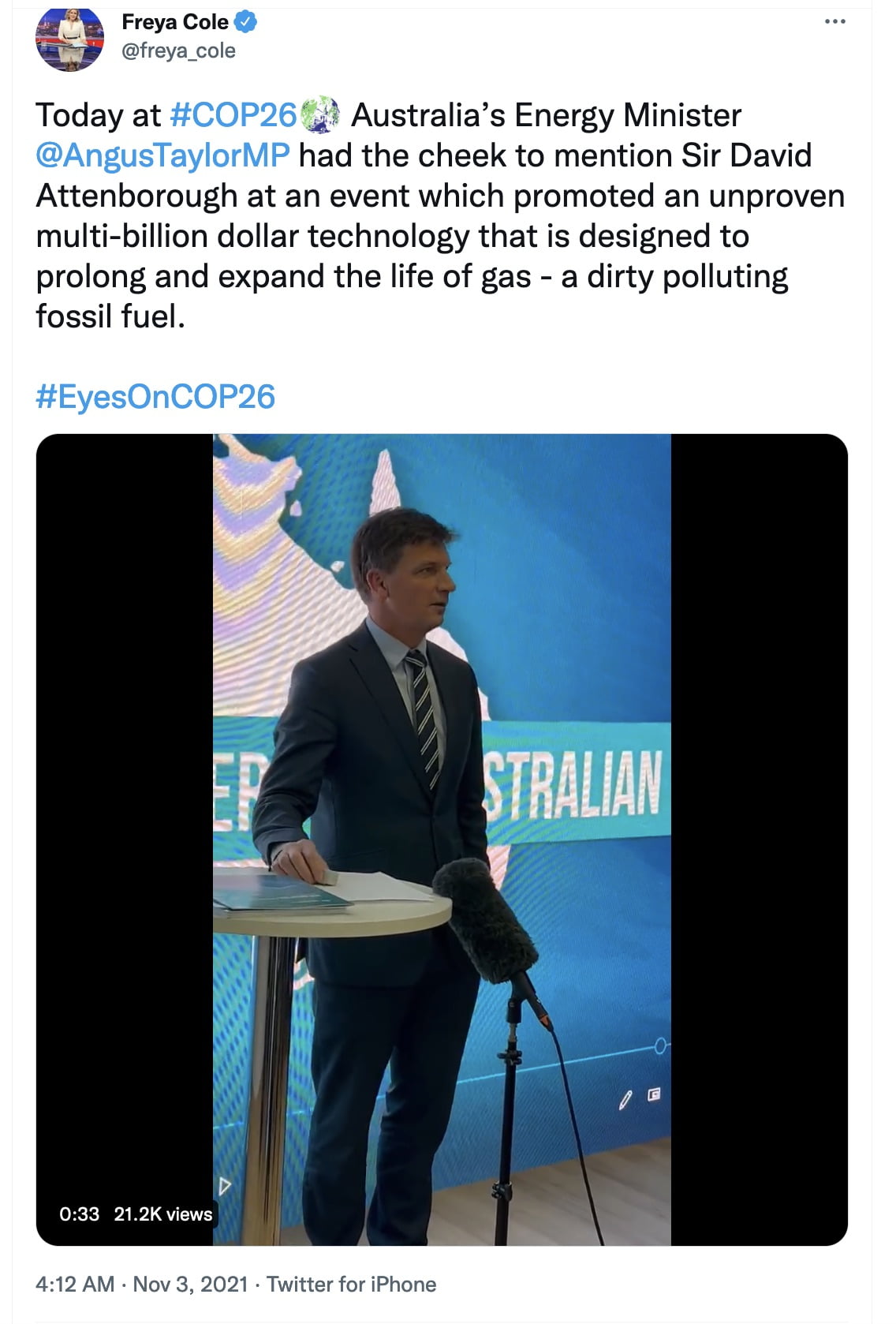 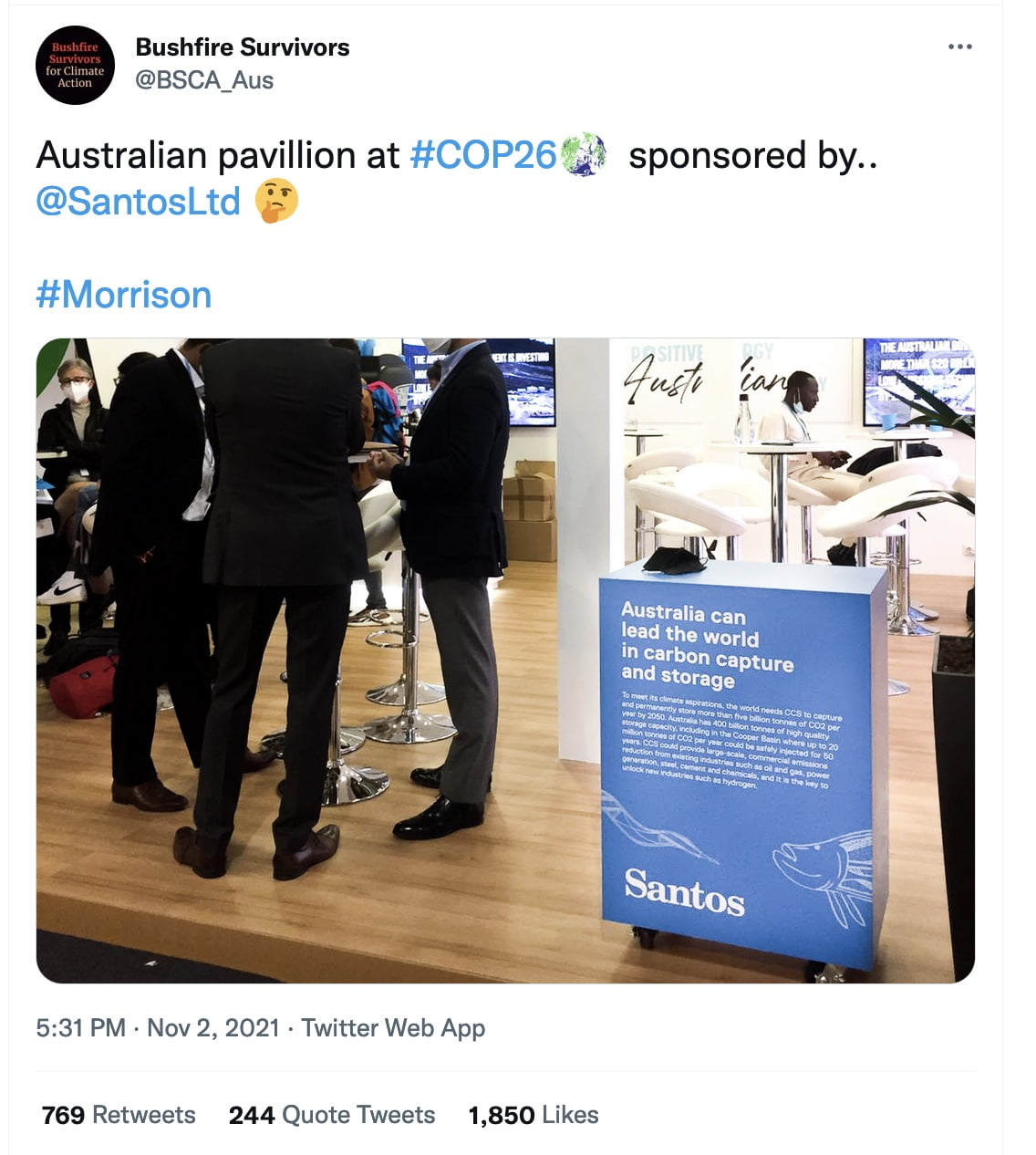 By day three, it appears the Santos branding has been removed from the pavilion. 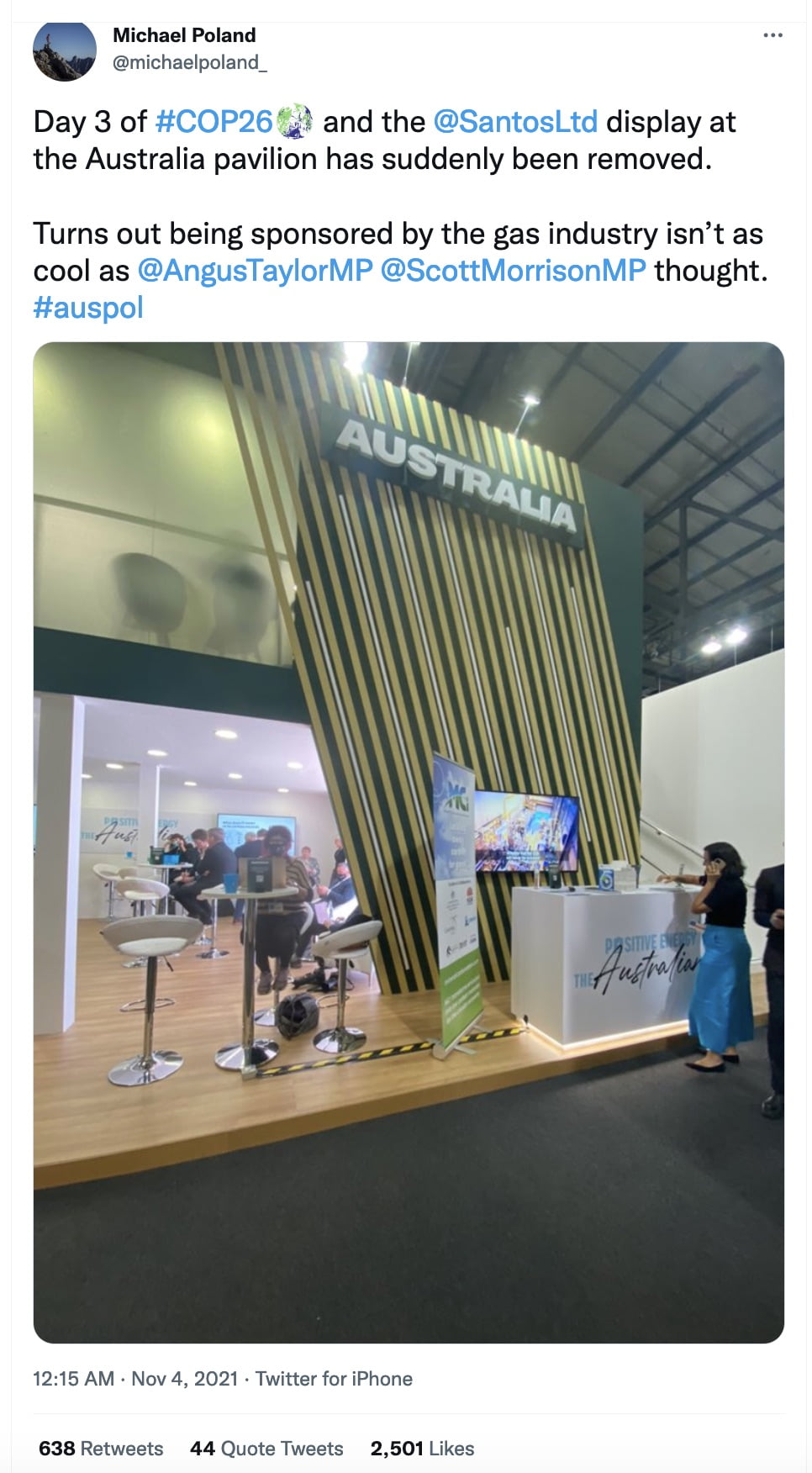 On Day 1, Australia was awarded the infamous Fossil of the Day award by the international Climate Action Network for:

… showing up to COP and shamelessly spruiking coal and gas exports, for having approved three new coal projects in the last months, for bringing to COP no new 2030 target, no new plans or policies to reduce emissions or phase out fossil fuels, having ruled out signing the Global Methane Pledge, and with a net zero plan engineered to delay meaningful action until after 2030 and prolong the life of the fossil industry.” 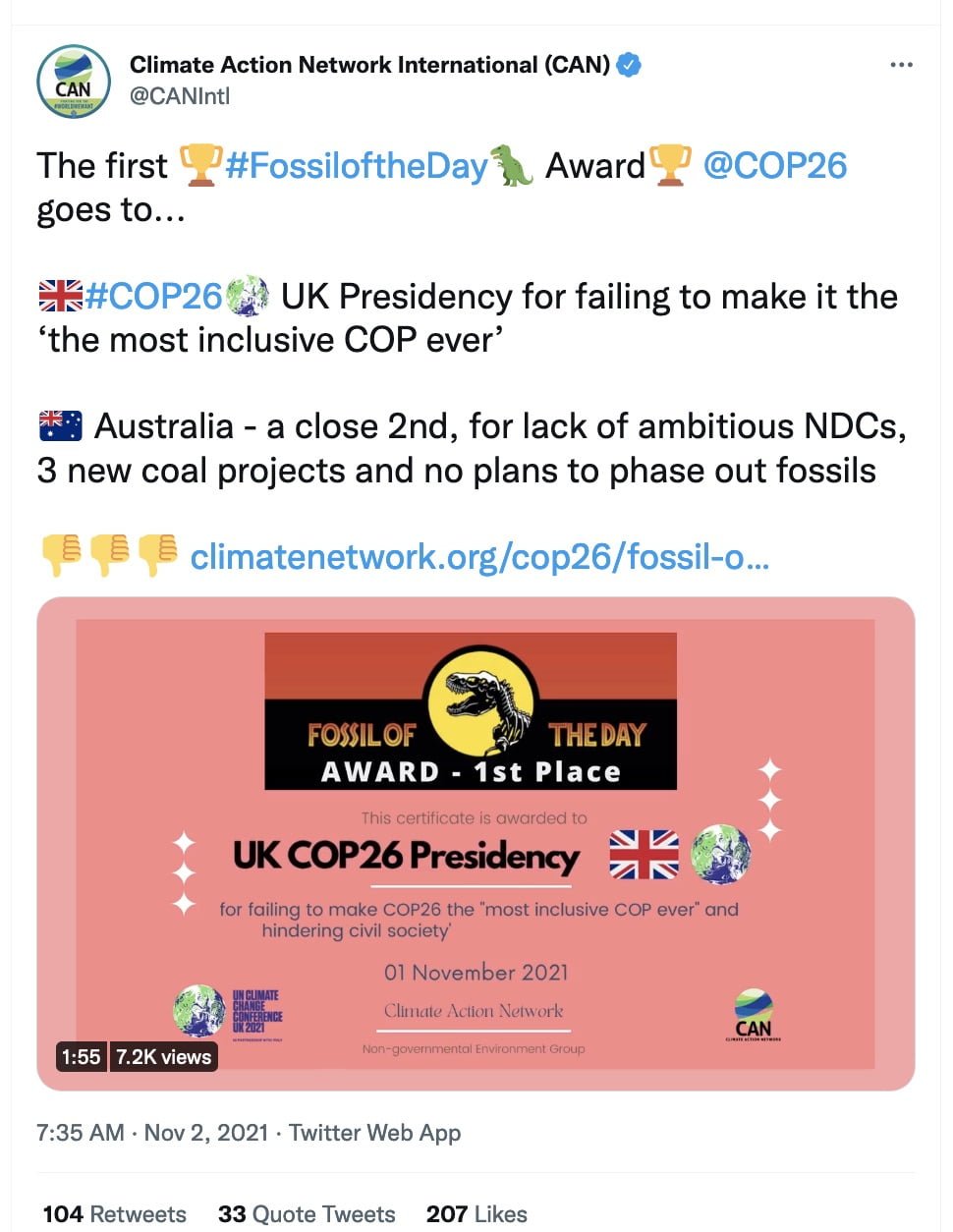 We couldn’t choose between:

• This epic speech at the COP26 opening by India Logan-Riley, Māori climate activist. “This is an invitation to you. Learn our histories, listen to our stories, honour our knowledge and get in line or get out of the way.” 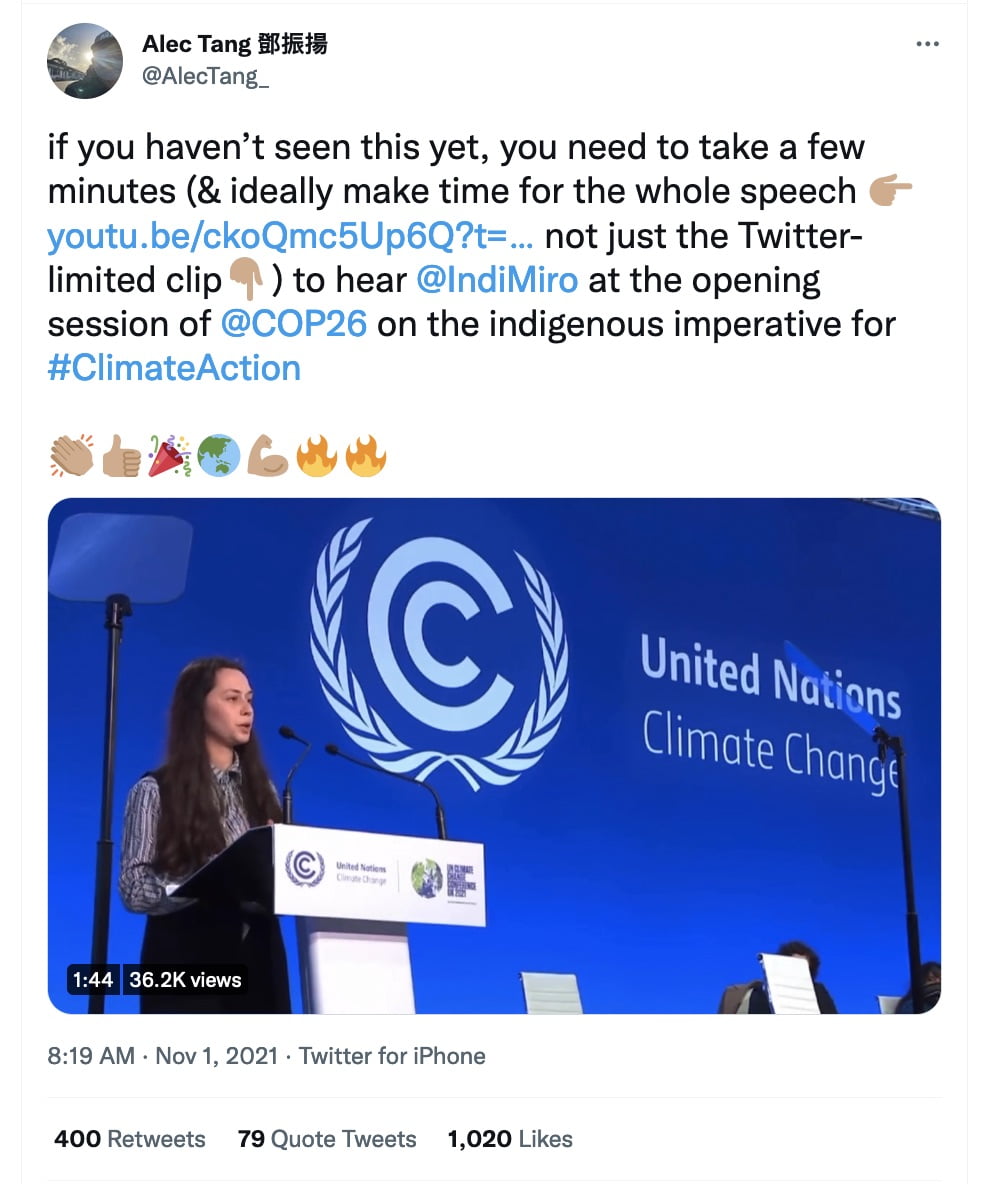 • Another powerful speech by Brianna Fruean, a young Samoan climate activist, with the line: “We are not drowning, we are fighting. This is our warrior cry to the world.” 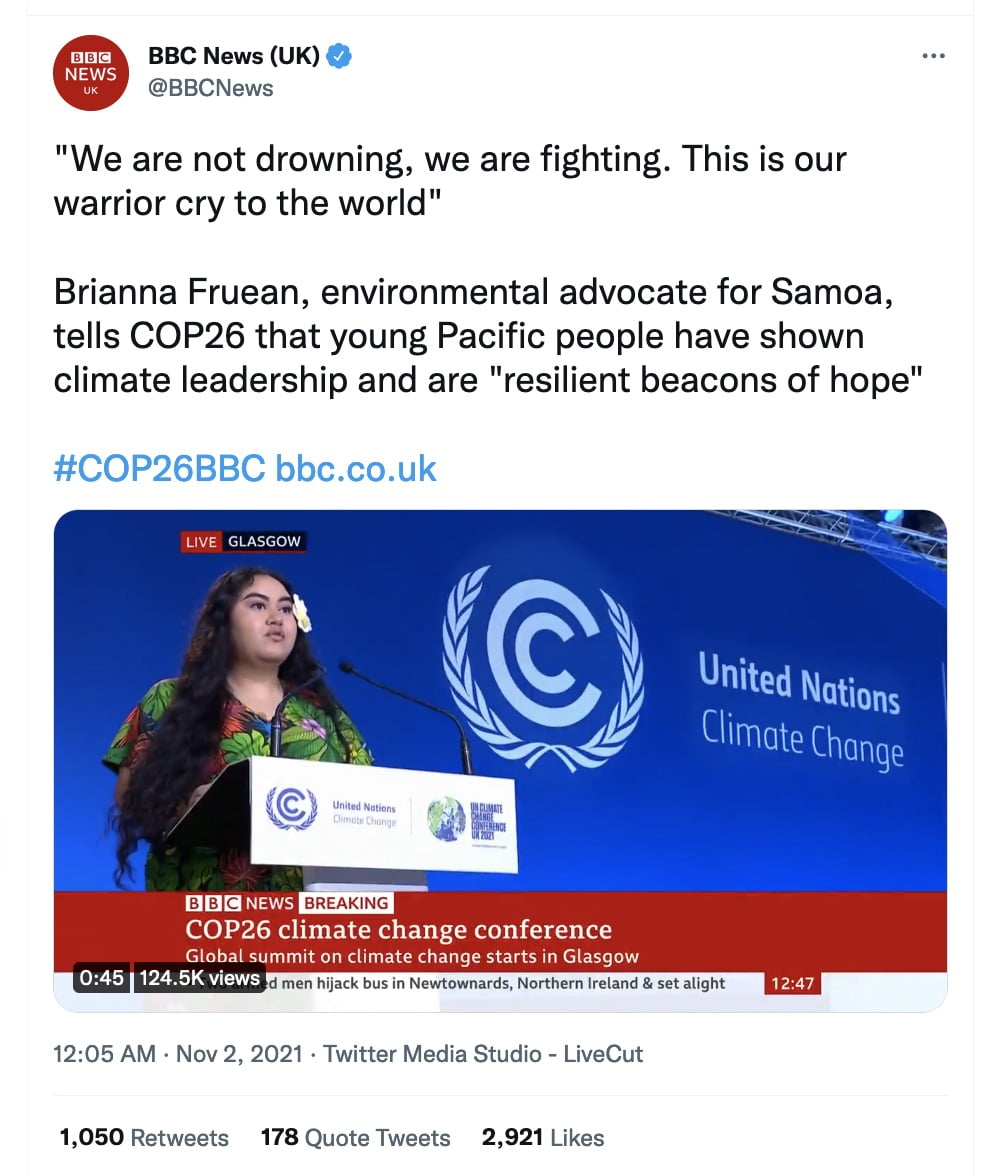 PrevPreviousCOVID SNAPS: mind your language, word of the year, and some sobering lessons from Sweden
NextListen up! Aboriginal and Torres Strait Islander leaders are demanding a key role in climate change solutionsNext