Image taken from real-time online mapping of the outbreak, by John Hopkins University Center for Systems Science and Engineering. At 6.44pm AEST, 28 January, 2020

Catch up with useful news and sources on the new coronavirus

The pace of news and developments with the novel coronavirus – #2019nCoV – is so rapid that at this stage, one of the best services we can provide is to connect our readers with useful sources of updates and analysis.

To that end, here is a Twitter list that includes more than 55 people, including leading virologists, public health experts, agencies and journalists covering the outbreak. Either subscribe to follow the list or check out the Twitter timelines of those members of interest (and please let us know of others who should be added).

The 2019-nCoV is the seventh member of the family of coronaviruses that infect humans, and while we wait to gain a better understanding of its impacts, one message is already clear: the importance of infection prevention and control, and here you can download the World Health Organization’s advice (dated 25 January).

Dr Paul E Sax, Clinical Director of the HIV Program and Division of Infectious Diseases at Brigham and Women’s Hospital and Professor of Medicine at Harvard Medical School, has described the uncertainty surrounding 2019-nCoV, as the current outbreak is rapidly evolving.

“Despite the extensive press conferences and commentaries from public health officials, microbiologists, and specialists in Infectious Disease — most of them quite thoughtful — the uncertainty will no doubt lead to isolated overstatements of both alarm at one extreme and reassurance at the other,” he says.

Sax also details the “breathtakingly fast” pace of scientific discovery and communication, especially on the molecular level, including:

And notwithstanding the perils of social media, Sax says that Twitter “remains an extraordinarily efficient way to transmit and summarize data, at least when it’s done by a thoughtful individual”.

(On that note many of the links in this post have been sourced from the aforementioned Twitter list; the map in the feature image can be tracked here).

The summary below is drawn from a Twitter thread by medical virologist, Dr Cillian De Gascun, from University College, Dublin (sent on 27 January).

Coronaviruses are a family of viruses that cause respiratory and intestinal illness in birds, animals, and humans. #2019nCoV is the 7th coronavirus known to infect humans (#HCoV).

Four #HCoVs – OC43, 229E, HKU1 & NL63 – cause mild ‘common cold-like’ illness. All of us have probably been infected with one or more of these at some time. These 4 #HCoVs only occasionally cause serious illness

The other 2 #HCoVs – #SARS & #MERS – cause severe disease. #SARS emerged in 2002 & infected about 8000 people worldwide with a case fatality rate of about 10%. The #SARS outbreak was ultimately controlled with good infection prevention & control procedures

Although it’s too early to definitively ascertain the case fatality rate for #2019nCoV, it seems to be in the region of 3-4%: obviously lower than #SARS/#MERS but significant nonetheless

Analysis of the virus genome suggests #2019nCoV crossed over into humans in November/December of 2019. Based on a comparison with the genomes of other known viruses, it seems #2019nCoV originated in bats.

However, we don’t yet know if the virus passed through an intermediate host first, although if we can infer anything from #SARS (palm civets) & #MERS (dromedary camels), it probably did

Humans were originally exposed to the virus at a seafood and live animal market, but it is not known how the virus was transmitted at that location. At this stage, we don’t know how many people were exposed, or how many times #2019nCoV crossed the species barrier.

The virological data suggest that there was either a single #2019nCoV introduction into the human population, or a small number of animal-to-human transmissions of very similar viruses

As that market has now been closed and disinfected, the fact that the outbreak is continuing and growing suggests that sustained human-to-human transmission is responsible for the majority of new cases.

It has been calculated that each case is infecting between two and three other people. Obviously, if this pattern continues without intervention, the outbreak will continue to expand. There is no vaccine against #2019nCoV at this time, and no specific antiviral therapy.

Great credit is due to healthcare workers and scientists who are treating patients, contact-tracing, sharing data, and developing diagnostics; and thoughts and prayers with those who are sick and who have already lost family and friends as a result of this outbreak.

The summary below is from a Twitter thread by Dr Tom Inglesby, Director of the Johns Hopkins School of Public Health Center for Health Security (sent on 27 January).

The following thread regards how we should be planning for the possibility that nCoV cannot be contained.

Containment of nCoV is, and should be, the highest priority in China. This requires government, health care/public health system and the public to work together to identify those with symptoms, get them tested rapidly, get them isolated (home or hospital), provide good med care while keeping health care workers protected.

The global community should be doing all it can to be helping China with the terrible set of challenges it is facing in its effort to contain nCoV. It is not only the right thing to do for China, but it is critical in trying to help prevent global spread.

We also don’t have enough data on human to human transmission yet to make confident predictions about how it will spread. We don’t know enough about extent of asymptomatic cases, asymptomatic spread, proportion of spread happening in health care facilities vs community.

But given uncertainties + very high stakes, part of global and national planning efforts should now be aimed at possibility that nCoV containment could fail.

Others have raised this possibility too, including @neil_ferguson at Imperial who has said in last 24 hrs that containment of nCoV might not succeed.

Global and national leaders should be looking ahead to what must be done to prepare for the possibility nCoV can’t be contained, even as we continue to work as hard as possible to contain it in China and beyond.

The work to prepare for the possibility of failed containment could be called something like: Plan for Global Mobilization to Respond to a nCoV Pandemic. There are a series of highest priorities that should be at the top of that Plan, including:

Crash vaccine development. Top of list because would so dramatically change response and outcomes.

Researchers at @CEPIvaccines and @NIAIDNews are working on vaccines… All pharma+biotech companies that could have a vaccine or therapy candidate of relevance should be enlisted in the effort.

Multiple vaccine efforts should be pursued in parallel. Money should not be rate-limiting. Timelines should be shortened in whatever ways possible that doesn’t get in the way of a final safe, effective product. Rapid clinical trials prepared.

Global plan for mass manufacturing of vaccine when it is created. This should be planned for multiple places in the world concomitantly. Cannot have a successful vaccine come out of only one place and remain only in that country. It will need to be broadly distributed.

Plan for WHO global stockpile with global allocation plan. Once vaccine developed, WHO will need to allocate vaccine quickly to countries around world. WHO can work with United Nations system to help distribute, but will also need partnerships w/ global logistics companies to succeed.

Urgent serology development programs. Need this to help determine severity of nCoV. If many have been exposed and are immune, but never had disease, this suggests asymptomatic spread and that disease will be mild in many. We need serology testing.

Massive expansion of diagnostics development capacity in China and around world. We need diagnostics to isolate and triage and care for people, and if containment fails will need very high numbers of reliable diagnostic tests around the world in the months ahead.

Rapid clinical trials for antivirals. There isn’t much evidence current antivirals will be useful, but there should be in vitro studies, clinical trials to study all reasonable candidates. Other medical interventions that have sound theoretical basis should be studied quickly.

Government plans to provide transparent, full, rapid communication. People need to trust that governments giving them the full story so that they will agree to get tested, isolated and treated.

Good accurate information needs to flood out the bad, the harmful rumors, the conspiracy information. Governments may need to partner with traditional and social media to get factual information out to people.

Plans to keep travel and trade moving in the world, even if we do have disease spread around the world. nCoV airport screening efforts make sense now as a way of early identification of patients. But if containment fails and disease is widespread in world in time ahead, new plans are needed.

If nCoV spreads widely in the world, it will be in strong interest of all countries, to keep trade going despite the pandemic – global economy is highly interdependent. Governments would need to work with organisations like the World Trade Organization and travel industry organisations like International Air Transport Association to keep goods, people moving.

Certainly there are other key elements of such a global plan, and additional recommendations welcome here.

Overall in this planning effort, countries will need to take some actions on their own. Others will require international cooperation; for example, many countries don’t have capacity to develop, make vaccines, diagnosis, masks, et al, so will need to work with countries that do.

• Containing new coronavirus may not be feasible, experts say, as they warn of possible sustained global spread
Stat News (26 January)

• The Wuhan virus: how to stay safe
Foreign Policy, by Laurie Garrett (25 January)

The simplest of infection-control strategies should get more of the limelight: Wash your hands often, especially after going to the bathroom and before eating or touching your face.

Cover your mouth and nose with a tissue or your sleeve when you cough or sneeze. And don’t go out if you’re sick with fever and cough.

Each of these behaviors reduces the Ro [reproductive rate] of an infection, because the Ro reflects a series of factors — human behavior, crowding, ventilation, and cleanliness, as well as the inherent qualities of the microbe.”

• What should we fear more: Coronavirus or fear itself?
The Globe and Mail, by André Picard (27 January)

• Should you panic about the coronavirus from China? Here’s what the experts say
The LA Times (24 January)

• The 2019 novel coronavirus – what do we know so far?
MJA Insight, by Allen Cheng and Deborah Williamson (27 January)
Extract:

It is too early to tell how this outbreak will unfold, but we need to be prepared at all levels of the healthcare system, with a key tenet of this response being rapid and reliable communication.

This should include advice to clinicians and patients on who, how and when testing should be performed, and how to manage patients with suspected and confirmed infection.

Australia is yet to be significantly challenged directly by any of the three coronavirus outbreaks to date – should this outbreak spread to Australia, public health authorities, governments at all levels, researchers and clinicians, laboratories and the community will need to work together in a timely manner to ensure an effective response.”

• For a detailed overview of clinical and scientific findings published to date, see this Twitter thread by clinician scientist Dr Muge Cevik (sent on 25 January). 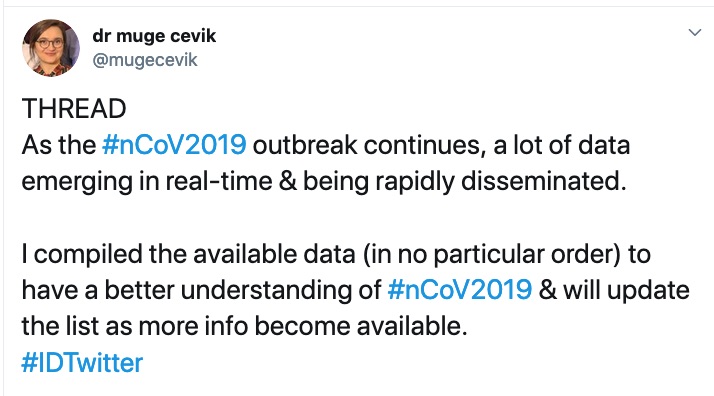 PrevPreviousDebating Aboriginal identity: the untold health impacts
NextSport can be an important part of Aboriginal culture for women – but many barriers remainNext