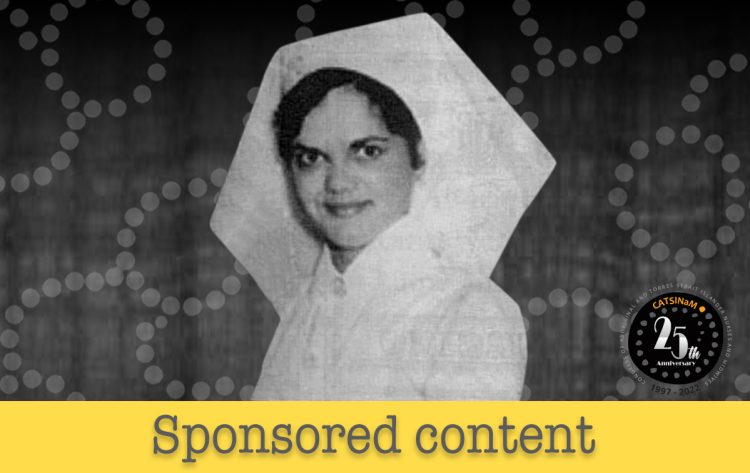 CATSINaM founding member Dr Sally Goold on the day she graduated as a nurse. Photo supplied by Dr Goold.

Celebrating 25 years of ‘Unity and Strength through Caring’

Dr Sally Goold, one of the organisation’s founders and Elders, featured at the campaign launch, where participants in an online webinar were told that the motto chosen 25 years ago, ‘Unity and Strength through Caring’, remains just as relevant today.

This article is published by Croakey Professional Services as sponsored content. It is funded by CATSINaM – see their campaign portal.

The family of Wiradjuri teenager Sally Goold was so proud when she was accepted to train as the first Aboriginal nurse at Sydney’s Royal Prince Alfred Hospital in the 1960s.

“Every one of my brothers and sisters rallied around and contributed so that I would have everything just right . . . so I would be as good as everyone else,” she wrote in In Our Own Right: Black Australian Nurses’ Stories.

Sally Goold (nee Bamblett) had wanted to be a nurse “for as long as I could remember” but, like many Aboriginal and Torres Strait Islander peoples, she encountered low expectations for her success – which she simply ignored.

“I was really stunned to hear people, both black and white, say that I wouldn’t be able to do it. I would say, ‘Of course I will’. When I asked them why they didn’t think I would, the reply was always, ‘Because you are Aboriginal’.”

History shows that Dr Sally Goold’s determination and courage in the face of such blatant racism translated to many firsts – including as the first Aboriginal nurse at Australia’s inaugural Aboriginal community-controlled health organisation, the Redfern Aboriginal Medical Service, where she was recruited in 1971 by her colleague Dulcie Flower, who was the first Torres Strait Islander nurse to work there.

In 1995, after a stellar career in nursing, university teaching and senior roles in the Queensland Health Department, Sally Goold completed a Master’s degree investigating the reasons for the continuing low numbers of Indigenous registered nurses, which she attributed to persistent racism and a lack of student support services.

Two years later she was instrumental in establishing the Congress of Aboriginal and Torres Strait Islander Nurses (CATSIN) and was appointed its first Chief Executive Officer.

CATSIN was established at the historic National Aboriginal and Torres Strait Islanders Nursing Forum held on Gadigal Country, Sydney, in August 1997. It was incorporated a year later on Gubbi Gubbi Country, Bribie Island. In 2013 CATSIN changed its name to CATSINaM to recognise its midwife members.

CATSINaM this year is celebrating 25 years of activism by Indigenous nurses and midwives, each week honouring collective and individual acts of activism over 25 weeks leading up to a national gala dinner on August 20 – the date CATSIN was founded by 35 Aboriginal and Torres Strait Islander nurses.

The campaign launched on 2 March with a national online webinar where participants heard messages of support from founding members, current members, former and current board members, the NSW nursing and midwifery union and the Commonwealth Chief Nursing and Midwifery Officer, Adjunct Professor Alison McMillan.

Since its inception, CATSINaM saw increasing the Aboriginal and Torres Strait Islander workforce as core business, as well as challenging the Western health model that “promotes separation, hierarchy and power struggles” and “denies the emotional, social, spiritual and political aspects of health in our holistic way”, as detailed in the national forum report.

CATSINaM has consistently fought for recognition of the unique contributions and commitment of Indigenous nurses and midwives in health policy and practice, acknowledgement of cultural expertise and knowledge, and the promotion and implementation of employment strategies to grow the workforce.

In 1997 when CATSIN was formed, Aboriginal and Torres Strait Islander nurses and midwives accounted for 0.8% of the nursing workforce. Today that figure is 1.4%.

CATSINaM CEO Roianne West, a descendant of the Kalkadoon and Djaku-nde peoples, said: “Although we’re celebrating 25 years of amazing activism and achievements, it also provides an opportunity to pause and reflect on whether a 0.6% increase in workforce participation over 25 years is enough? I would say it’s not and we have much work to do.”

There is a long history of Aboriginal and Torres Strait Islander peoples fighting for their rights – the 1967 referendum, for land rights, identity and cultural heritage – and against racism and discrimination. Activism by Indigenous nurses and midwives in Australia has played a large part of this history in post-colonial resistance.

In 1997 when CATSIN was formed, John Howard was Prime Minister and the Bringing them Home report into the removal of Aboriginal and Torres Strait Islander children from their families had just been released.

Into this political environment hostile to Indigenous peoples, CATSIN challenged employment participation barriers, called out racism, demanded culturally safe workplaces for both staff and patients and a seat at any table where health policy was developed.

“It was a challenge but we needed to make the environment safe for Indigenous nurses,” Dr Goold said in a video message for the launch of CATSINaM’s 25th anniversary celebrations.

“We set about changing that. We were a little isolated group; surviving – that was the greatest challenge.”

Aunty Lynda, who left nursing and midwifery to study and teach law, has for many years researched the effects of racism on Indigenous peoples.

“I don’t see any reason why Aboriginal and Torres Strait Islander nurses can’t be equals in the health system. It astounds me that we are not equal; that we do have to put up with racism; that it does have a lifelong impact on us when it happens,” she told the 25th anniversary launch webinar.

The achievements are many

CATSINaM’s achievements and its advocacy for Indigenous ways of knowing, being and doing have been critically important for Australian and international healthcare, according to founding member Professor Juanita Sherwood.

“The bottom line is we’ve saved so many lives because we exist in the health workforce in this country. We had to make sure our people got healthcare and that wasn’t something that was generally accepted until the 1960s and 70s.”

Professor Sherwood, Pro Vice Chancellor First Nations Engagement at Charles Sturt University, was one of the first Aboriginal nurse researchers. She started her nursing career in the early 1980s at St Vincent’s Hospital Sydney when it was the only hospital responding to the HIV and AIDS crisis and saw the impact of systemic discrimination on patients and their families.

She recalled the early days at CATSIN: “We were 0.8% of the health profession back in that time and we were lonely and we were dealing with racism and with culturally unsafe healthcare, not just towards our patients but towards ourselves.

“We were not seen as vital to the health workforce; we were seen as add-ons.”

She said CATSIN built solidarity and partnership with Aboriginal Health Workers, supporting their work in communities and healthcare settings.

“We stood with our Aboriginal Health Workers to get registered, to get acknowledged as critical workers in the health workforce. And as a national peak body we ensured our peers were valued as part of the national agenda around First Nations health,” she said.

“We promoted a holistic way of knowing, being and doing that was culturally safe healthcare and practice. That was vital and we were talking about that back in 1997. We also demanded that all forms of nursing re-examine models of practice and we still do.”

Aunty Nola White, one of the four nurses involved with the incorporation of CATSIN in 1998, said she was so proud of the organisation – from “the vision of Aunty Sal” and watching as connections, advocacy and activism grew around the country.

As CATSIN’s inaugural chair Aunty Nola said, the motto – ‘Unity and Strength through Caring’ – chosen 25 years ago by the founding members was just as relevant today.

“Unity, us all getting together; the strength would be the strength from each other; and caring because nursing is a caring profession,” she said.

“Keep the strength going and bond together.”

Read: In Our Own Right: Black Australian Nurses’ Stories, edited by Sally Goold and Kerrynne Liddle, is available on Kindle through Amazon.

This article was written by Linda Doherty and edited by Dr Tess Ryan and Dr Melissa Sweet, on behalf of Croakey Professional Services, and funded by CATSINaM.

PrevPreviousThe power of tech giants has made them as influential as nations. Here’s how they’re sanctioning Russia
NextHow can you help boost COVID vaccination rates in Africa?Next