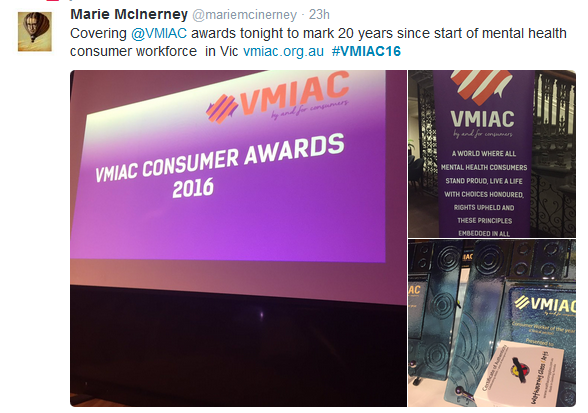 It’s 20 years since the first people with lived experience of mental illness – a group of four “consumer consultants” in Melbourne – were funded to work in the Australian mental health system.

Journalist Marie McInerney covered a special awards night on Friday night for the Croakey Conference News Service to mark the anniversary and honour the work of the growing mental health consumer workforce.

Victorian researcher and tertiary educator Cath Roper has worked for 20 years to put an end to the types of horrific treatment and indignities she experienced as a mental health patient two decades ago, including being locked up in isolation without even a bedpan.

On Friday she was honoured for her pioneering work with a lifetime achievement award at the inaugural 2016 Consumer Awards hosted by the Victorian Mental Illness Awareness Council, the peak body for people with lived experience of mental health issues.

The awards were held to mark the 20th anniversary of the mental health consumer workforce in Australia. In 1996 Victoria became the first state to fund mental health services to employ consumers to improve care quality from their perspective.

Roper was in that first group of four consumer consultants employed in 1996 and later became the first Consumer Academic at Melbourne University. She works with students and academics at the Centre for Psychiatric Nursing, which declares its “belief that consumer perspective is an academic discipline in its own right, with application to research and education activities”.

Accepting the night’s big award, Roper said her hopes for social and medical change go beyond better treatment to building a culture that actually values and celebrates experiences that go with being considered mentally ill.

“(I want) to be in a world where our experiences are seen as a very particular way of knowing, something to learn from,” she said.

“I would never want to see those things get medicated out of existence,” she said.

Roper said she was humbled and overwhelmed to be given the award. She felt lucky to have been able to build a profession while mental health advocacy for so many others remained “tireless, often thankless, often invisible and unpaid”. 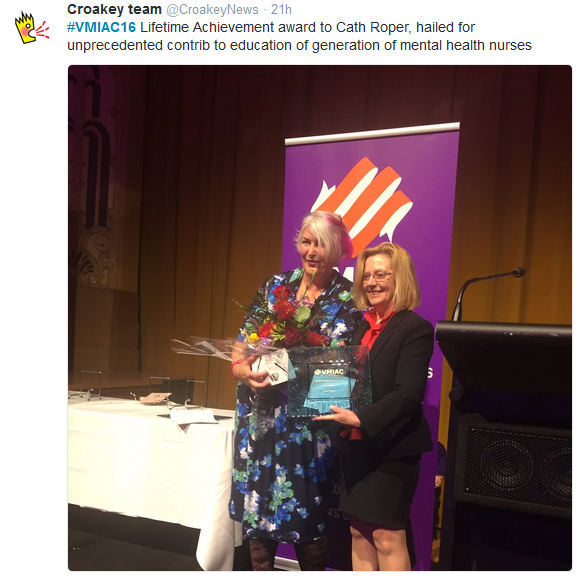 The VMIAC award honoured her “unprecedented contribution to the education of a generation of mental health nurses and to shifting the understanding of clinicians”.

She teaches Consumer Perspective and Participation in the School of Nursing and Social Work, looking at the origins of the consumer movement through to critical analysis of nursing, health care settings, and the nature of medical psychiatry as potential barriers to consumer participation.

It explores conflict in practice between humans rights obligations and provisions under the Mental Health Act, including the use of seclusion and restraint.

“It’s a practice that, fortunately these days, we’re keen to not only reduce but to eliminate. This is something we no longer want people to go through.”

Roper brings personal insights, having endured “totally undignifying and humiliating” experiences as a mental health patient in the 1980s and 1990s, including being held in seclusion where “there wasn’t even a bedpan.”

Aside from being stripped of basic human rights and dignity, forced to defecate on the floor, she said that being left alone without support also only added to the distress that she had been experiencing when admitted.

“That’s something I’ve never forgotten. It’s something that has influenced all the work I have done subsequently.”

Roper also works for seclusion and restraint to be seen in broader terms – including “chemical restraint”, where people are over-medicated so they become more docile.

“‘Code Grey’ it’s called. Five people rush to you and incapacitate you and inject you with something to put you to sleep. These are practices that we know in other circumstances would be assaults and violations, but they are put across as for our own health.”

Her research work includes a recent joint investigation of consumer and carer perspectives on poor practice and the use of seclusion and restraint in Australian mental health settings.

The report on the study – published this year in the International Journal of Mental Health Systems, provides graphic first hand descriptions of what coercive treatment means for patients and sadness and frustration from supporters and carers:

“You go in there seeking help and surviving the trauma s in your life, but you end up having to cope with even more trauma. It’s pointless. (Consumer)

“We’ve had people who have come in and said ‘this happened and I don’t know why, I don’t know why they dealt with me this way and why was I thrown on the floor and injected when all I said was please don’t give me any more of that medication it makes me really, really unwell’.” (Supporter)

“So what I’ve seen with people who’ve felt, when they’ve had even a single 24 hour experience of seclusion and restraint under the mental health system, which is the door, the police, the medication, down into the whatever, the taking of the clothes, the whole lot – that person’s changed forever in their feeling and their relationship to the society around them. To every other state agency, they’re changed, and that allows, that’s again that learned helplessness.” (Consumer).

It also recommends further specific investigation of the experiences of minority and marginalised groups, with isolation raised by participants as particularly negative for Aboriginal and Torres Strait Islander people with mental health issues:

“Could I put another perspective…another form of restraint and isolation is..when traditional Aboriginal people are brought down out of their country and placed in an environment that’s totally alien to them, so on top of their mental illness issue, they’re out of context, they’re out of country, they could be in the middle of an exercise yard, but they’re still restrained, they’re still totally isolated because they can’t connect.” (Supporter).

The study concludes that seclusion and restraint are “unnecessarily overused”, and puts at risk the shift to recovery-oriented approaches in mental health care.

While the use of seclusion and restraint may meet an immediate need to control and contain, this also creates and exacerbates problems for consumers, supporters, staff and the broader system of care.”

VMIAC Board chair Vrinda Edan, a Monash University consumer educator and researcher, said the consumer workforce has played a big part in shifting policy in Victoria over the past two decades.

That included influencing reform of the state’s Mental Health Act in 2014 to focus on recovery, be aligned with the Convention for the Rights of People with Disability, and support decision making rather than compulsory treatment.

“The consumer workforce has overall contributed really substantially to some quite significant changes like that,” she said.

While there was a long way to go, she said there had been “extraordinary growth” in the mental health consumer workforce, expanded out from just adult services in the beginning to working now with children and young people. It also now incorporates family and carer perspectives.

The roll-out of 60 fulltime positions in the coming months in Victoria for a new post-discharge support program that would officially employ peer support in clinical services for the first time was “quite extraordinary, a really significant investment,” she said.

Similar gains have been made nationally, but there is still much uncertainty.

New VMIAC CEO Maggie Toko said an early focus for her work will be on the implications for consumer workers as the National Disability Insurance Scheme (NDIS) is rolled out. 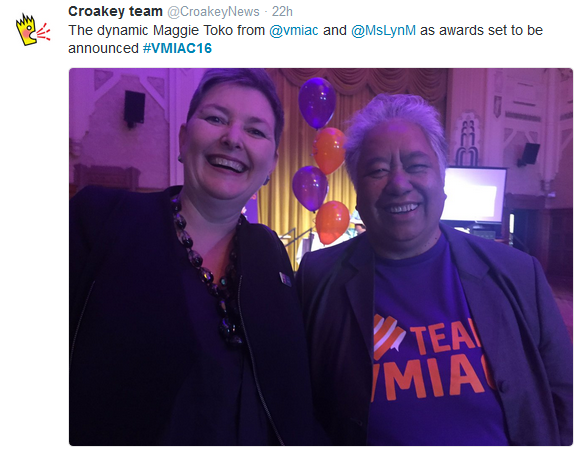 There’s hope that many mental health consumers able now to choose their own service providers will opt more for consumer workers or consumer-run services, but also concern in Victoria that it will put pressure on community managed mental health services, where many work.

“They may not have work to go to,” said Toko, a Maori woman with lived experience who also intends to give VMIAC a more diverse voice, reaching out to young people, LGBTIQ, culturally and linguistically diverse (CALD), and Aboriginal and Torres Strait Islander people.

There have been calls, raised in Australia in recent years by international expert Mike Slade, Professor of Mental Health Recovery and Social Inclusion at University of Nottingham, for the mental health workforce to be made up of at least 50 per cent of people with lived experience.

Edan said there are no targets in place yet in any Victorian service or sector that she knows of, but believes there should be policies of affirmative action in place, whereby if there are two people with the right skills and experience to do a mental health job, then if one had lived experience they should get the position.

Time for “mad studies” to emerge in Australia

Edan said the inaugural 2016 consumer awards came about when VMIAC noticed one unfortunate side effect of growing acceptance of consumers in the workforce was that specific categories for consumers in general health service awards had dropped away.

“Part of the argument is that consumer participation and the consumer perspective should be embedded in everything. While that’s an honorable goal, it actually isn’t the reality at the moment, so VMIAC thought we would take this opportunity, being the 20th anniversary, to honour and really celebrate that work.” 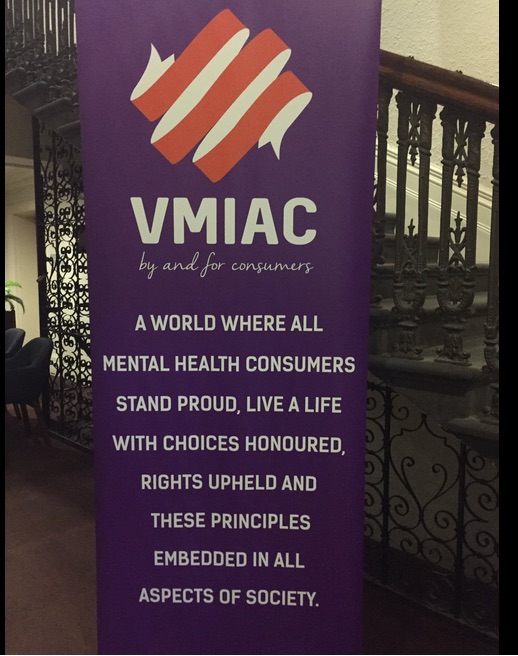 Awards were also presented to individuals and teams working in different fields, from Consumer Advisory Groups that act as training grounds for consumers to move into the workplace through to outreach in rural and regional Victoria.

It was a big hit for those attending – “a magical night”, said consumer advocate and policy advisor Indigo Daya.

“I haven’t been to an event (before) where we have honored each other not for our experiences or struggles but for our shared work to have better lives, to have our rights upheld, to make sure our dreams are possible and respected,” she said.

Daya told Croakey she had begun her journey in policy and advocacy as a mental health consumer who was treated compulsorily, after many years of losing her sense of self and hope.

“For me my healing came when I let go of thinking I had an illness and (from) actually connecting with my peers and looking into my past, looking at trauma from my childhood and coming to understand that my madness had meaning, that I didn’t have some random chemical imbalance in my brain, I actually had a really meaningful experience.”

“I guess that’s why tonight was so special,” she said, saying that consumers so often get put into ‘boxes’. They were either ‘mad’, ‘ill’, ‘sufferers’, people to be pitied, or activists and advocates constantly asking for change and better services, she said.

“Tonight there was none of that. Tonight we were people who are survivors, who care about one another, have learnt from our experiences and we came together to honour that.”

Daya said an emergent academic field of “mad studies” is starting to blossom in some countries though it did not yet exist in Australian universities.

“But hopefully we are starting to bring that thinking along, that madness is something we can be proud of, there are many ways you can live with madness and celebrate it,” she said.

“We do bring something new – consumers, survivors, mad people.

“We’re still an emerging civil rights movement that many people don’t understand but on nights like tonight I think we start to shift that.” 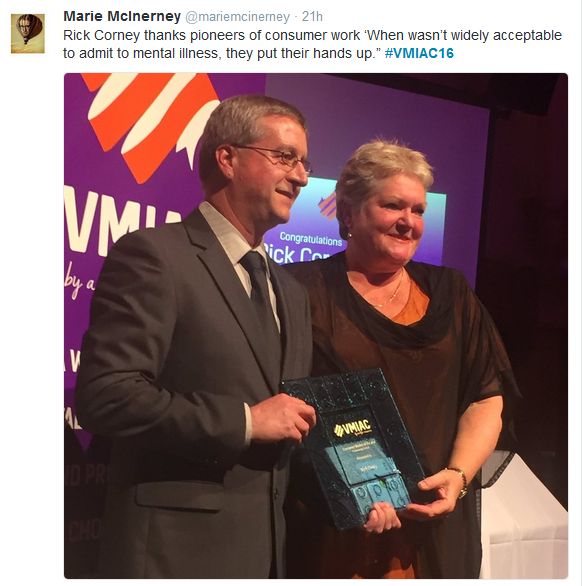 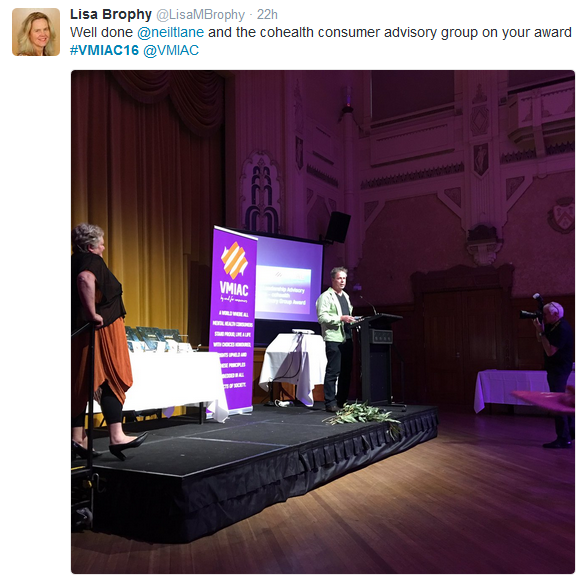 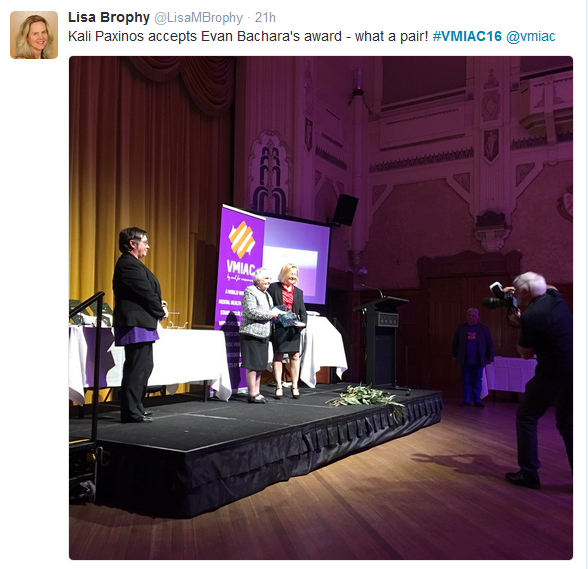 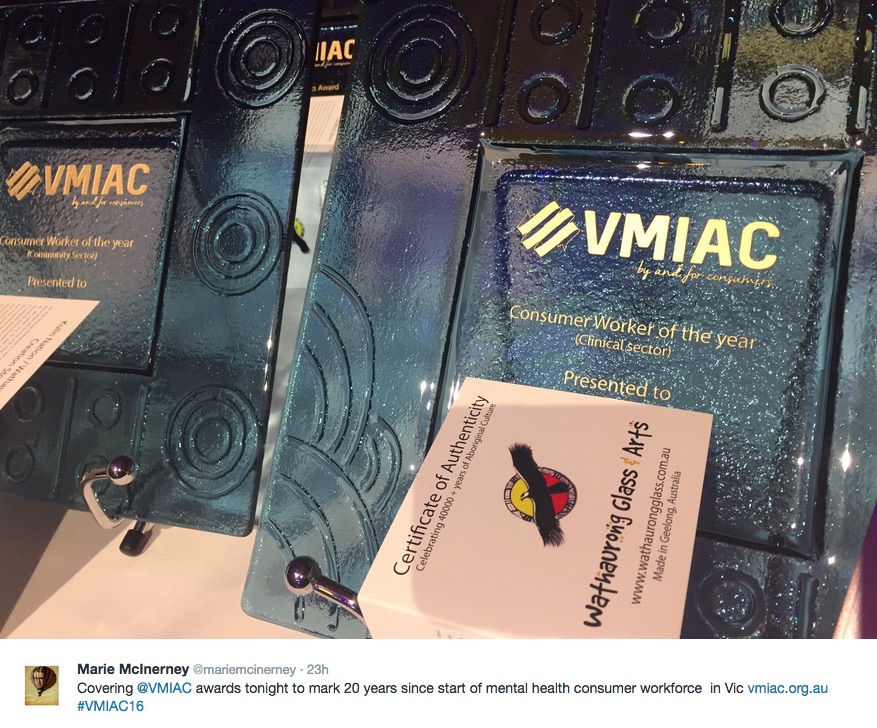 Read the #VMIAC Twitter transcript – and thanks to all those who tweeted the news. 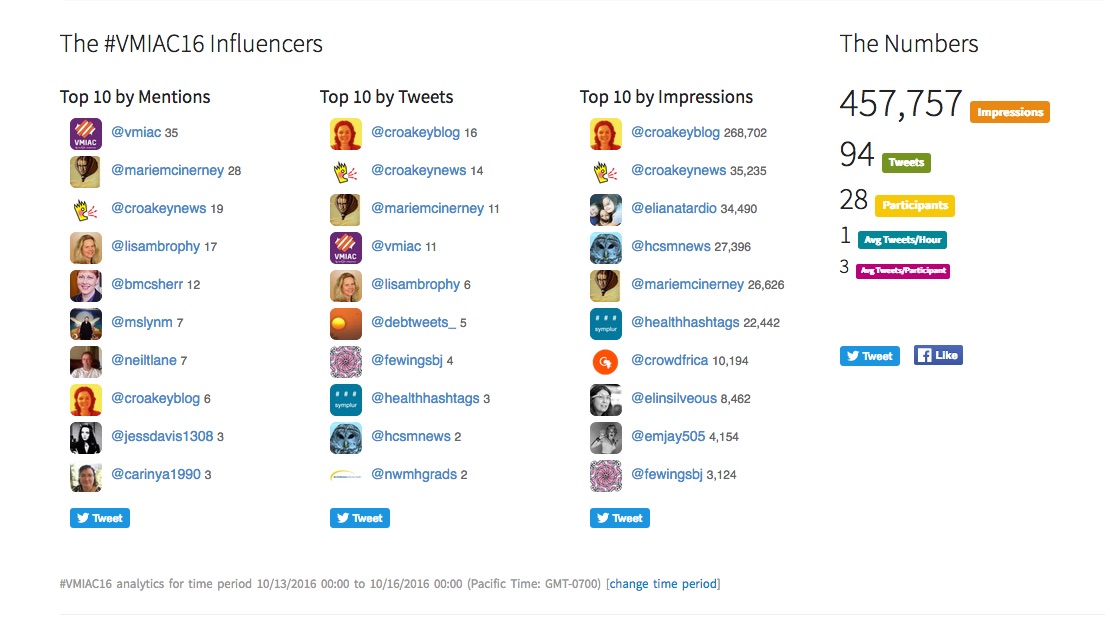